For The Guys Who Make The Toys 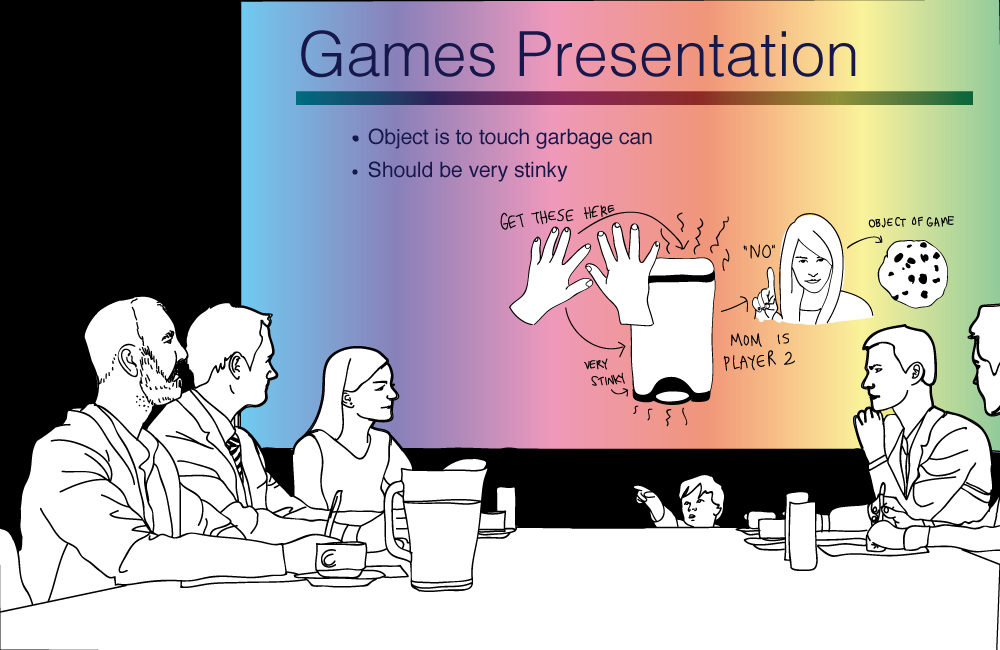 In today’s post, Erin’s toddler explains to toy companies why they need to stop trying to make $24 organic xylophones happen.

In Which My 1.5 Year Old Pitches Game Concepts to the Board of Hasbro

as told to Erin Williams

“Lady and Gentlemen, thank you for allowing me to share with you today my highly exciting game ideas for children ages one to three. I think you’ll agree that these games are improbably fun: more bubbly than guppies, more blazing than monster machines, more telegraphic than tubbies. Ahem. Mom? My sippy cup please.

“As you all know, the average attention span for a human my age is about 14 seconds. I don’t care how many rainbows, blinking lights, trap doors, whistles, or whining renditions of Row, Row, Row Your Boat you add to a small plastic castle: we are already over it. We were mesmerized by its junky swinging windows with stickers of knights and princesses inside for less time than it takes a constipated prune-guzzler to have at his diap. We do appreciate that you spent $30 on it, assuming that it would buy you a few minutes of quiet to steal away and check your Instagram feed, but next time put that money towards something more productive, like a swimming pool full of ice cream or a miniature pony. OK?

“The first concept I’d like to share with you is for a game that has brought me, personally, endless hours of enjoyment. It’s perhaps the funnest game I’ve ever played, and let me tell you, I go to daycare: I’ve tried out a lot of toys.

“Instead of the traditional board, the main component of this game is a cardboard box filled with kleenex. The object of the game is to take the kleenex out by the fistful, an inch of tissues at a time. Once all of the tissues are out, the player must ruin them by crumpling them and rubbing them into the carpet. They must decorate each and every one with dirt, snot, pet hair, and/or old food. The tissues are then put back into the cardboard box, a few at a time. The more disgusting and unusable the box of tissues appears, the more points you get.

“My next concept is for a party game that requires multiple players. In this game, the best player, who is also the only one who is aware the game is being played, zeroes in on a target. In a very covert manner, the gamer will attempt to play nicely and share willfully with their target, and then turn around and bite them on the arm for ‘no apparent reason.’ The winner of this game gets a time-out and no snack, but also the glory of winning. It’s really marvelous.

“I do think that Tissue Box and Bite Other Children are my finest ideas, but here’s one more, which I call Touching the Garbage Can.

“In Touching the Garbage Can, player one, the baby, rubs his or her hands enthusiastically on top of and around the dirtiest parts of the kitchen trash can, particularly the lid and anywhere inside. He or she should try to lift the lid as much as possible and really get in there, especially if there is old food inside. The best time to try this game is after player one’s hands have already been washed prior to a meal. Player two is typically a parent, and their objective is to look horrified and yell something about not touching the garbage can. At this point, player one should throw a screaming tantrum because touching the garbage can is the whole point of the game and they will LOSE if they don’t complete this task. Player one should do everything in his or her power – including tears, kicking, and bonking his or her head onto the tile floor – to achieve the goal of garbage can-immersion, and in the process make player two feel profoundly guilty about trying to ruin the game. The game ends when player two gives player one a cookie before dinner so player one will stop crying.

“I think these will all be remarkable sellers for you, and much more pleasing for your customers than another tinkley toy piano or stuffed animal hybrid. I would be happy to license my game concepts to you for the very low price of sixteen Chobani Tot banana yogurts and a new copy of the Tails book, as I have ripped all of the moving parts out of the one I presently own. My business partner, who goes by “Mama,” would like a Venti cold brew with half and half, a pair of pants that is both flattering and comfortable, and five minutes of peace and quiet at some point today.

“Thank you all for your time. Is that a cheese tray?”