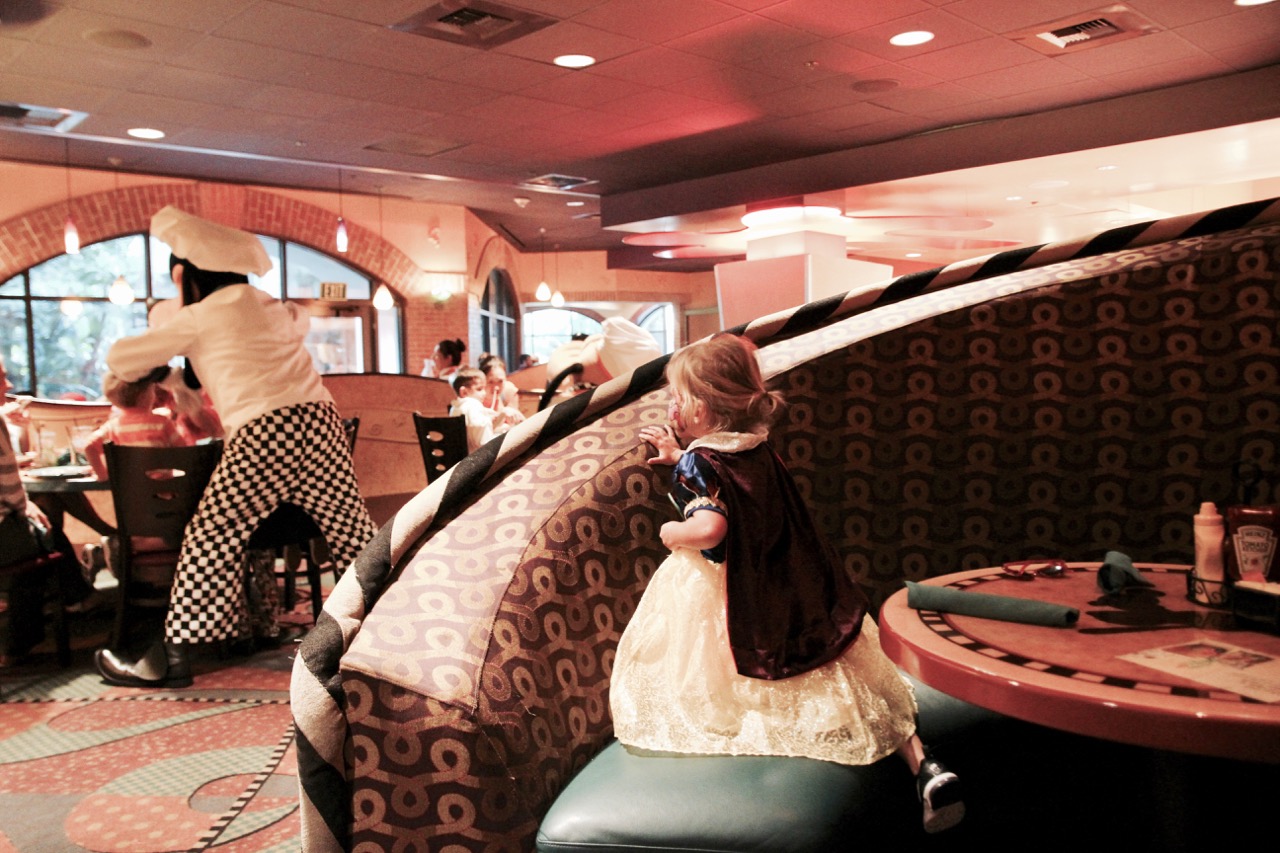 Face Painting. My parents never let me get my face painted as a kid, and I’ve always been in agreement with them on this point: Face painting is expensive, and somehow manages to make you hotter and sweatier, and when you are hot and sweaty things like face paint tend not to stay put, so all you’re doing is paying a whole bunch of money for a big mess of sparkly mud on your cheeks. Maybe face-painting technology has changed in the past thirty years – and ok, I suppose that’s likely – but we acquiesced and let Goldie get her face painted while I grumbled, and then discovered that not only does the paint stay on all day, but if you hold on to your receipt they’ll touch it up at any of the face paint stations located around the park. Worth it.

Popcorn. The popcorn at Disneyland is SO DELICIOUS. Get it just before the parade so you can eat it while you wave at princesses, and do not offer to share (when it comes to popcorn, to each their own).

Star Tours. I remember this ride as being sort of bumped around while watching a fairly lame 3-D movie. I assume they have upgraded considerably since the last time I saw it, because it was AWESOME. It was crazy realistic, to the point where both my son and I let out genuine screams of terror when something appeared to come crashing through the glass of our “ship.”

Staying Late On Disneyland Drive. Every night that we’ve spent at Disneyland, Kendrick and I have intended to head back into the park after dinner to watch one of the evening shows, and every night we’ve gotten pulled in by the cover band that plays on Disneyland Drive. It’s totally wedding-band-ish, but our kids somehow become dancing maniacs and get crazy to Beyonce until they just about pass out. Which is obviously the best possible end result.

The Jedi Experience. Every couple of hours, there’s a show where a bunch of kids learn to use the force and actually FIGHT DARTH VADER. And your kid can be one of the kids. You just have to book it over to the signup spot like the second the park opens, because obviously this is a popular attraction, and there are only a handful of spots available. Run, Forrest, run! 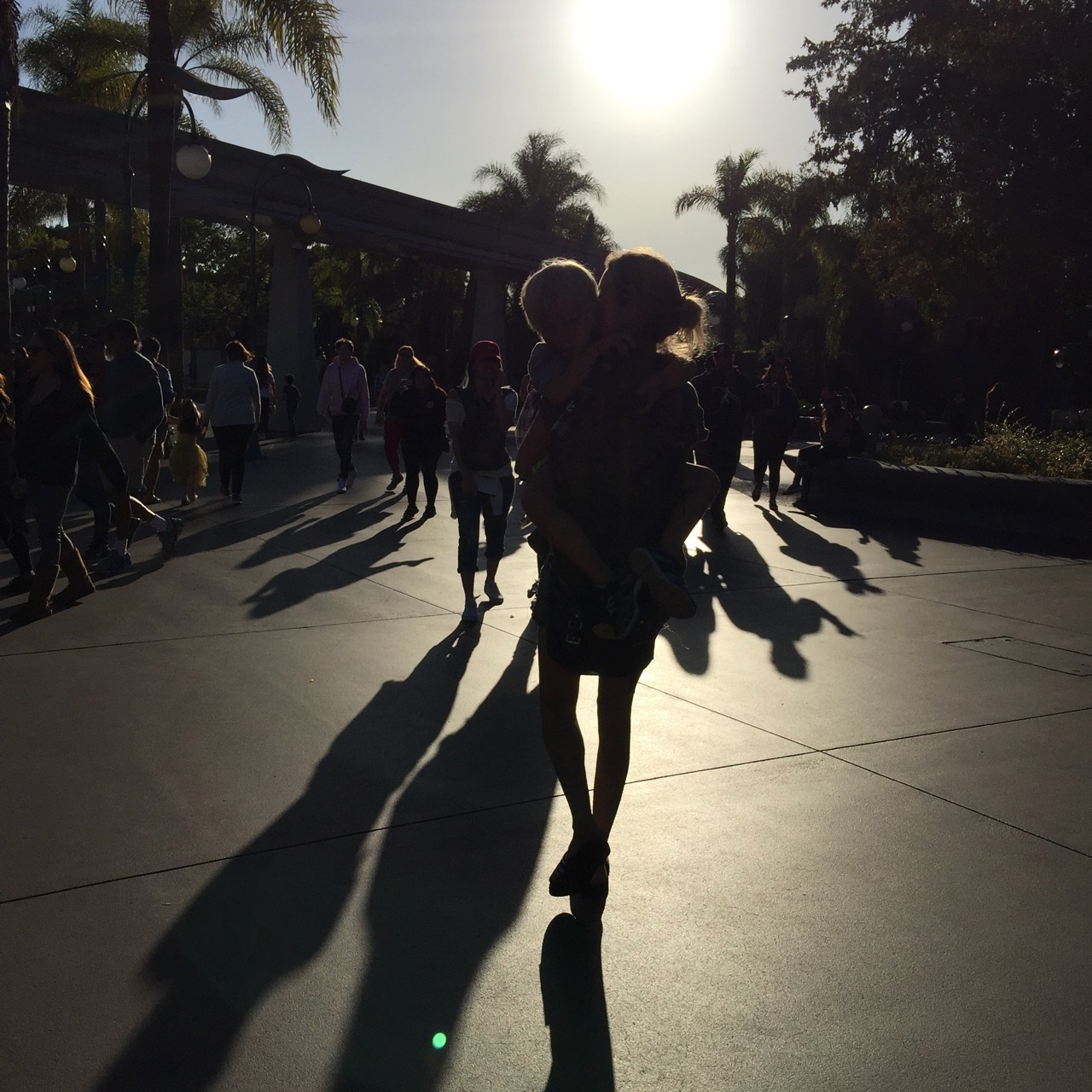 “Too tired to walk” is a good way to leave the park.

Seriously Not Worth It:

A New Costume For Your Kid. Unless your child has a little incident requiring an immediate change of attire – in which case yes, buy all the costumes – the costumes you find at Disney are silly-expensive. (We’re talking like $50-$70. Insane.) What I recommend you do instead: Realize that your child will see other children wandering around in costume and wish they had a costume too, and preemptively head over to eBay to buy lightly used costumes from someone who made the mistake for you. I recently bought my daughter a lot of six Disney costumes, including wands and tiaras and such (which I obviously failed to bring along, #fail) for about $60. The value, if new (and they basically look like they are), was probably around $500.

A Hotel Room. AirBnBs aren’t wildly inexpensive in Anaheim, because they know that they have a constantly rotating crop of potential renters, but you can get a decent room for around $120/night if you go midweek. Our room wasn’t the kind of place you’d want to hang out all day, but the point was to have somewhere to throw down our heads at night, and two bedrooms and a full kitchen in a safe building for $120 was fine by me.

The Indiana Jones Ride. Or, I don’t know, MAYBE IT IS. I wouldn’t know, because I had A FASTPASS FOR THE INDIANA JONES RIDE THAT I’VE ALWAYS DREAMED OF GOING ON, and then Kendrick DIDN’T PICK UP HIS PHONE SO I COULD TELL HIM TO COME AND TAKE AWAY MY CHILDREN SO THAT I COULD EXPERIENCE A LIVE-ACTION VERSION OF MY ALL-TIME FAVORITE MOVIE SERIES. Not that I’m mad.