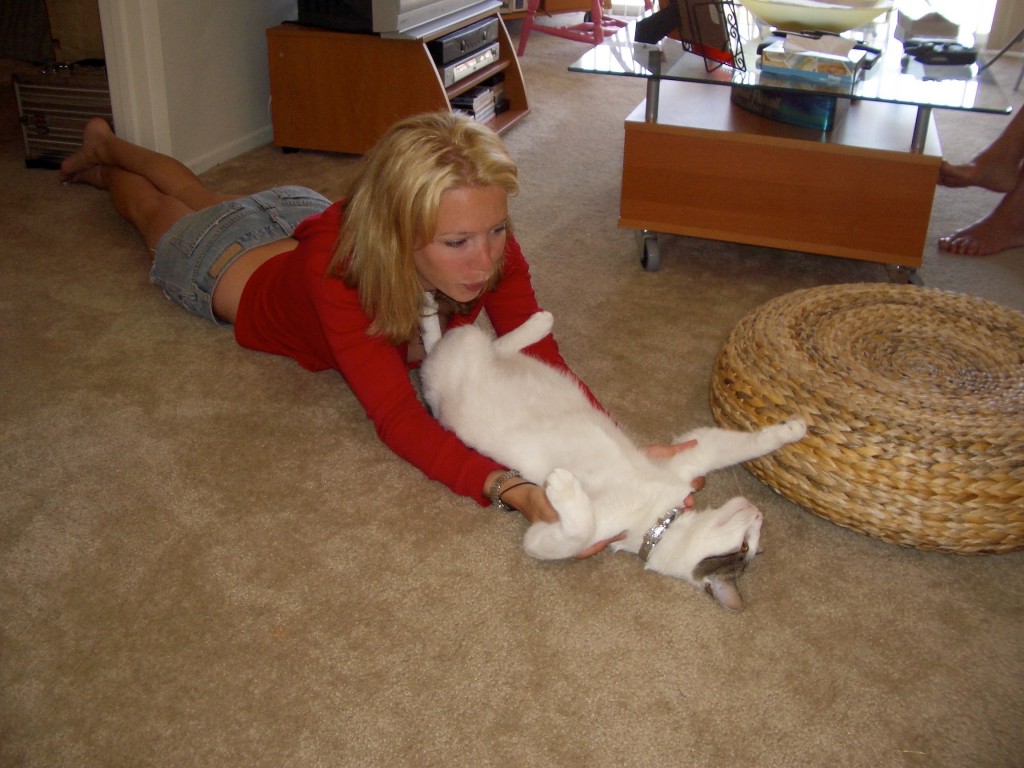 I know it’s common to be scared of death, but I’m paralyzed by it. I can’t think about it, can’t entertain the idea of it, and certainly can’t talk about it, because talking means feeling and feeling is too much. I wish I was all zen and wise and brave about something that I have dealt with in the past, and am going to have to deal with more and more as time goes on, but I’m not.

Take my dogs, for example: I’m going to outlive them. Those are deaths that I’m going to have to deal with – and likely in the not-too-distant future – no matter how much I dread them and try to pretend otherwise. But I always figured that when the day arrives that something happens to one of my dogs, I will fall to pieces, and will need to hand the reins of dealing with the logistics off to someone better-equipped than I (which would be anyone).

A digression: A few weeks after I moved to West Hollywood way back in 2003, I shot a short film with Ian Somerhalder and Cy Carter. Our set was way out in the desert; the days were long and the three of us spent a lot of time hanging around talking about whatever. On the first day of shooting I discovered that Cy lived just a few blocks away from me, that he had a cat that had just had kittens, and that they were available for adoption. …Did I want one?

Cy left his door open so I could let myself in to pick up the kitten, but it took me forever to find him: he had somehow gotten into a three-foot-high closet drawer, and had hidden himself away underneath a stack of socks. I took him home, discovered he had fleas, panicked, and poured a gallon of flea powder over my kitten and my entire (carpeted) apartment. I named him Simon because he had the biggest ears of any cat I have ever seen, and it seemed to fit. He spent most of his time either shredding my pink throw blanket or attacking my feet so viciously that I had to wear socks around the house. He was a pain, and I loved him.

When I moved back to New York into a tiny apartment that barely accommodated myself and Kendrick, let alone a dog and a cat, my parents took Simon in. My dad and him had developed a massive bond during my father’s many trips out to visit me, and everyone seemed happy with the situation, so even when we moved out to the suburbs, that’s where he stayed.

And then, two nights ago, Simon died; my mother was home alone and discovered him under her bed. She called me crying. I told her to make herself some tea and go sit in another room, googled “what to do when your pet dies at home at night” (because I really didn’t know), then got in the car and drove to her house. Mom and I wrapped up Simon together. We took a last look at him, then covered his body with a towel, placed him in a garment bag, and set the garment bag into a large tote bag filled with ice packs so that we could bring him to the vet in the morning. I looked at my cat’s face; felt his rigid legs.

Maybe it sounds silly to those who have dealt with this in the past, but I hadn’t known that I could do that.

This post is a hard one to write, you know. Harder than most. Because it’s morbid. Because it’s sad. Because I don’t want to offend those who have suffered bigger losses, and who think that losing a cat is barely worth a mention at all, let alone the many words written here. But I wrote it anyway, because I feel like it would have mattered so much to me to have read this just two days ago, when I thought that I wouldn’t know what to do in this kind of a situation…and before I realized that I did.

We’re all scared of this kind of a loss. And if you’re anything like me, you might think you won’t be able to handle it when it happens. But what I’m telling you is this: I may have been the least-capable-of-handling-it person on the planet, and I handled it because I love my mom and she needed me and that was what mattered. And then I cried later on, when what needed to be done was done.

You know, I think part of me always through that the degree of sadness you felt following a loss was inversely proportional to your ability to take care of the details, the unfortunate minutiae (the forms, the decisions, the physical and emotional disarray) that comes along with the passing of any soul. But it turns out that being able to take on those logistics – whether you can, whether you can’t – doesn’t mean a damn thing about your love for the one who died. Feeling the loss, dealing with the loss, choosing to turn your focus instead to someone who else who needs support in that moment – it’s all about love.

This experience was sad – so sad, and so hard – but it was also a surprise. Because what I found out was that while death isn’t something that anyone ever wants to take on, love is bigger. And it wins every time.