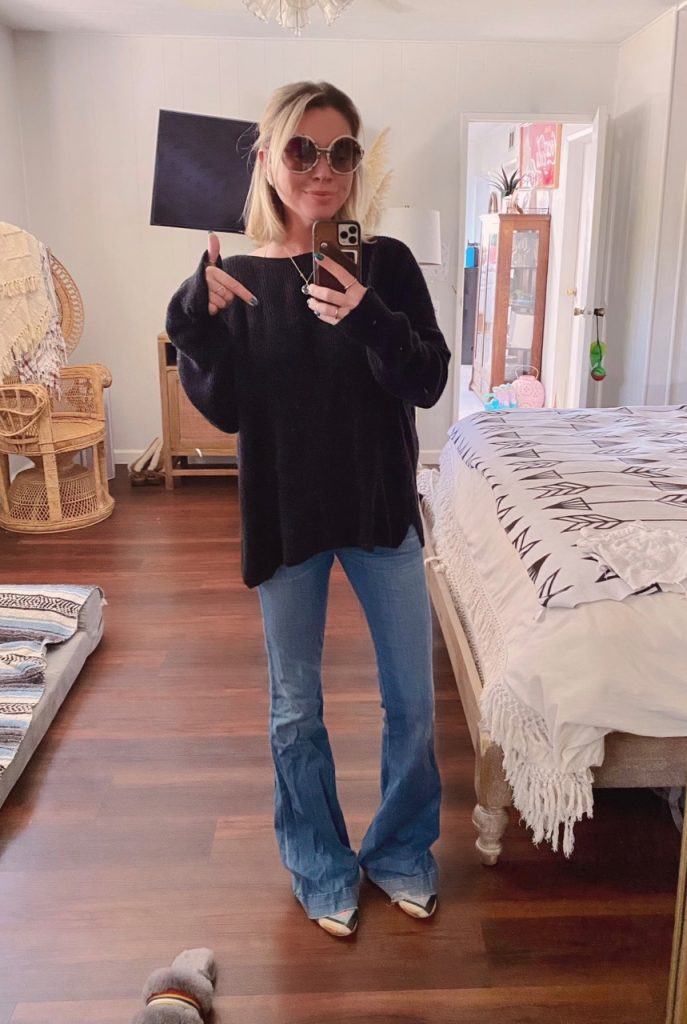 The jeans made it on eventually, but it was NOT a pretty process.

Over the weekend, I went into American Eagle to pick up a bra. The clerk asked me what size I was, and I told her that I honestly had no idea, because nothing about my body is as it was the last time I shopped IRL (say, oh, a year ago). When she measured me, it turned out that I am…um…bigger.

On Tuesday, my kids and I played hooky and drove up to Santa Barbara. After sushi and ice cream, I bribed them with my phone so I could spend a few minutes browsing in a consignment shop. I need new denim shorts, because denim shorts are my thing, and my denim shorts don’t fit. The clerk asked me what size I was, and I gave her what I thought was a decent range.

ALSO. Yesterday I went to the doctor for my first physical in a year and a half, only to discover that I have high blood pressure AND high cholesterol. Oh, and you want to know what happened on my way into the doctor’s office to make this very-not-depressing-at-all discovery? I was looking up at the signs over the doors to figure out which was for Internal Medicine and which was for Urgent Care, and because I was staring into the sky as opposed to the what was in front of me, I literally fell off a curb. Which might not sound like an especially big deal, but this curb happened to be a solid foot and a half off the ground, and let me tell you: A fall when you are coming up on 40 is not the same as a fall when you are a wee young thing of 20. I know this because when I was 20 I had a habit of wearing heels that caused me to fall as a matter of course, and yesterday’s fall was a whole nother ball of wax, my friends.

Fortunately, a curb located directly outside an Urgent Care facility is an extremely convenient place to take a tumble, because approximately two seconds after I landed, there were nurses running out with ice packs and offers of a wheelchair (really). “We saw you walking towards us,” they said, “and then all of a sudden you just…disappeared.”

Let’s go over what happens when you fall at nearly 40. I am currently developing bruises the size of pineapples on various parts of my body (partially because I now take fish oil, because my doctor told me to BECAUSE OF MY HIGH BLOOD PRESSURE, and fish oil apparently makes you more bruise-prone). My rotator cuff is a mess. My elbow is swollen. My wrist is in a bandage (which is super helpful when you write for a living), and my back is seizing up. I had coffee with a friend this morning, who informed me that I was walking “like you have a stick up your butt,” which, I suppose, is an apt descriptor for how one walks WITH A SEIZED-UP BACK.

How much of all this is Pandemic, and how much is the inevitable decline that comes with age? I have no idea, but it alllll happened at once, and the end result is that holy god, have the past few months ever been taxing on the old confidence. (Did I mention that I’m single? I’m single.) On the sort-of plus side, I am 1000% certain I’m not alone with this one, because I don’t have a single friend who doesn’t feel similarly, and who doesn’t also feel similarly guilty about caring about their appearance when there are SLIGHTLY more important things to concern oneself with at the moment.

And so I shall officially declare to you that I feel like crap, and I know you probably feel like crap too…but isn’t it kinda nice that we all get to feel like crap together? (Except for #fitspo influencers; please unfollow any and all of them immediately because you do not need that in your life.)

Solidarity in sweatpants, my friends.