When That 2009 Mason Jar Obsession Comes In Handy… 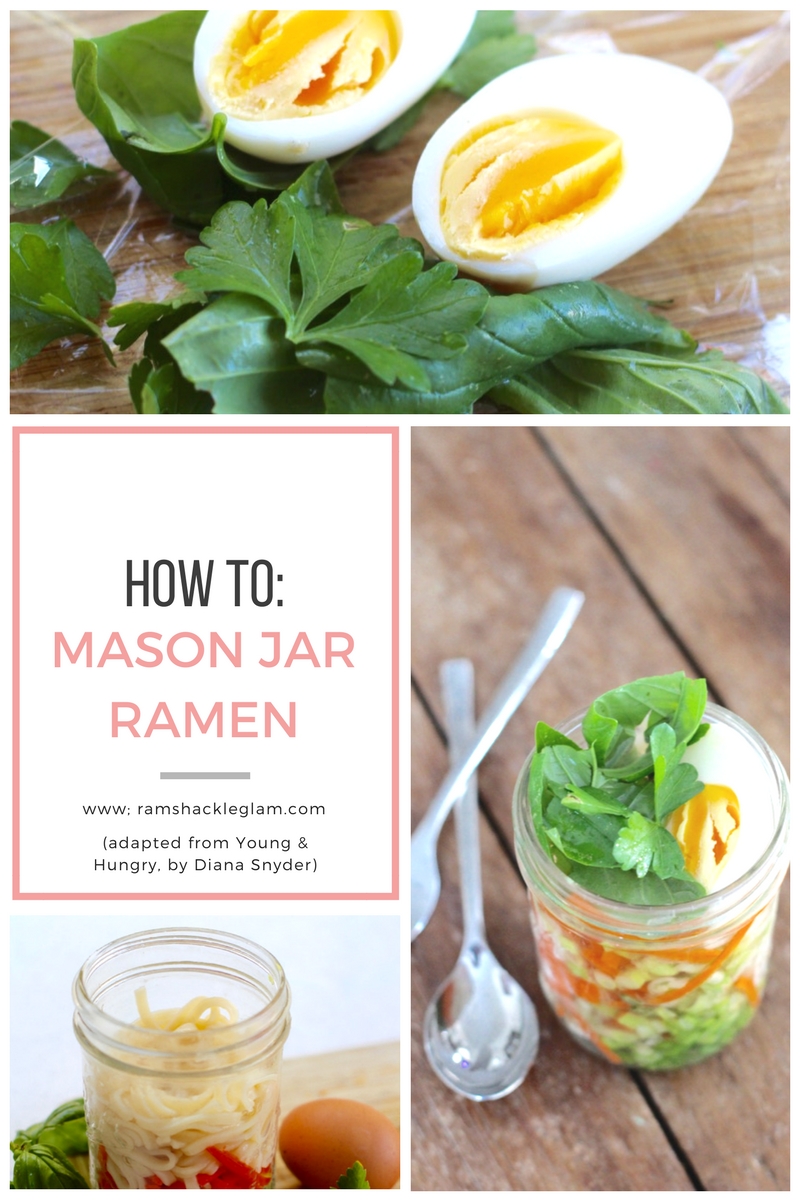 Hey, remember a few years ago when pretty much every post I wrote included a Mason jar in one way or another? What that time period resulted in was me owning a lot of Mason jars.

Which is fortunate, because now – thanks to Diana Snyder’s Young And Hungry: Your Complete Guide To A Delicious Life, which I’m slowly making my way through both for the easy recipes and just because it’s so sweet and funny and reminds me of my early 20s – I am aware that I can use my Mason jars to send Kendrick off to work in the morning with homemade ramen. And homemade ramen is the kind of thing that earns me points in the “Who Wakes Up Early With The Kids On Saturday” tally, which is kiiiiiiind of everything.

Thank you for the extra hour of sleep* this weekend, Diana Snyder.

A caveat: the recipe from the book is actually pretty different from the one you see here; I adjusted it to suit my (and theoretically Kendrick’s) tastes, and to use up what I already had in the refrigerator. But that’s what’s cool about Mason Jar ramen: it’s super adaptable. All you need are a the following elements:

And that’s it. Here’s what I did, if you’re in need of some inspiration.

* Technically what happens when Kendrick lets me “sleep in” isn’t “sleep,” per se, since no human on the planet would be capable of sleeping through the sound of my children trying to decide whether to watch Paw Patrol or Wild Kratts, but at least it involves being horizontal. 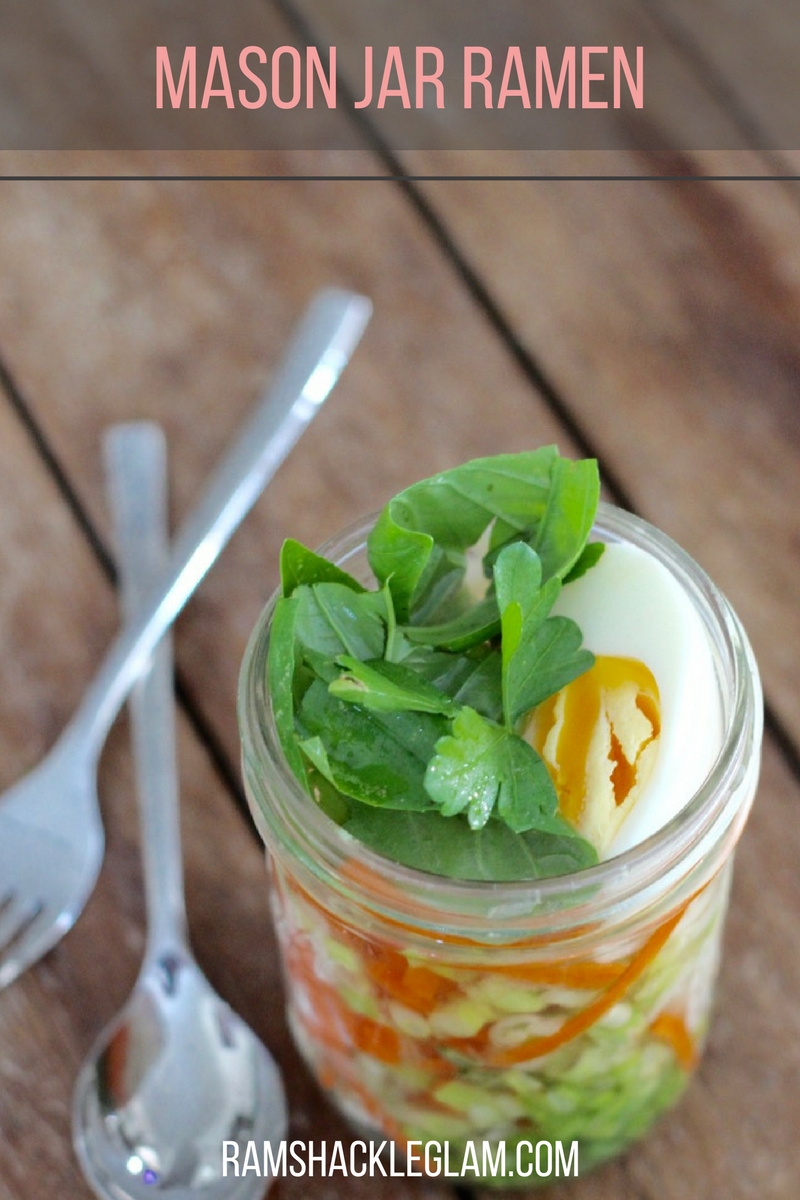 Bring a medium-sized pot of water to boil, then add the udon noodles. Return to a boil, and cook for 12 minutes. After the noodles have been cooking for two minutes, carefully add the egg to the pot of water (10 minutes of cooking will get you a soft-boiled egg, but you can add the egg sooner if you like it firmer).

When the noodles and egg are done, drain and run both the noodles and the egg under cool water for 30 seconds to stop them from cooking further. When the egg is cool enough to handle, peel and slice in half lengthwise, then set aside. 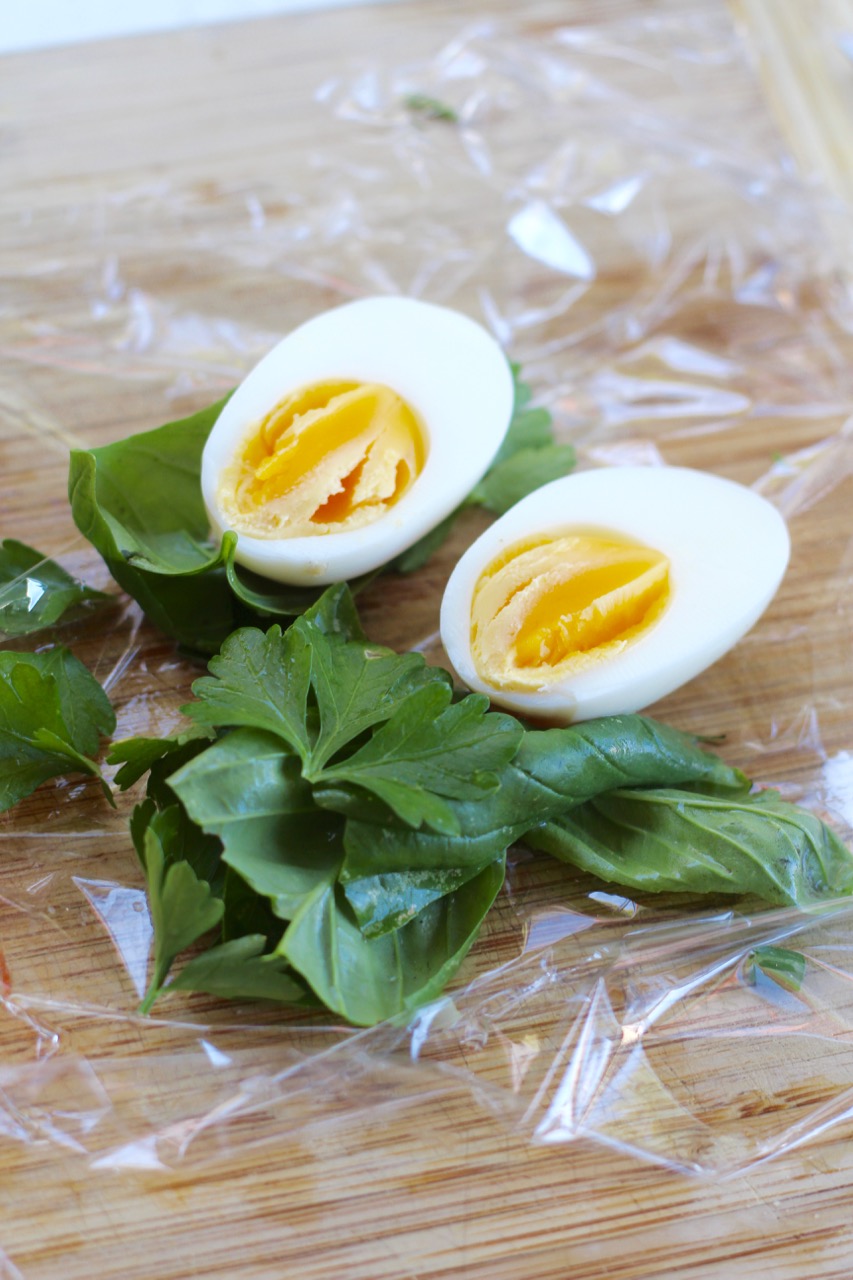 (This is exactly how I like my hard-boiled eggs.)

Next, layer the ingredients in the jar as follows: bouillon, soy sauce, green onions, carrots, noodles. 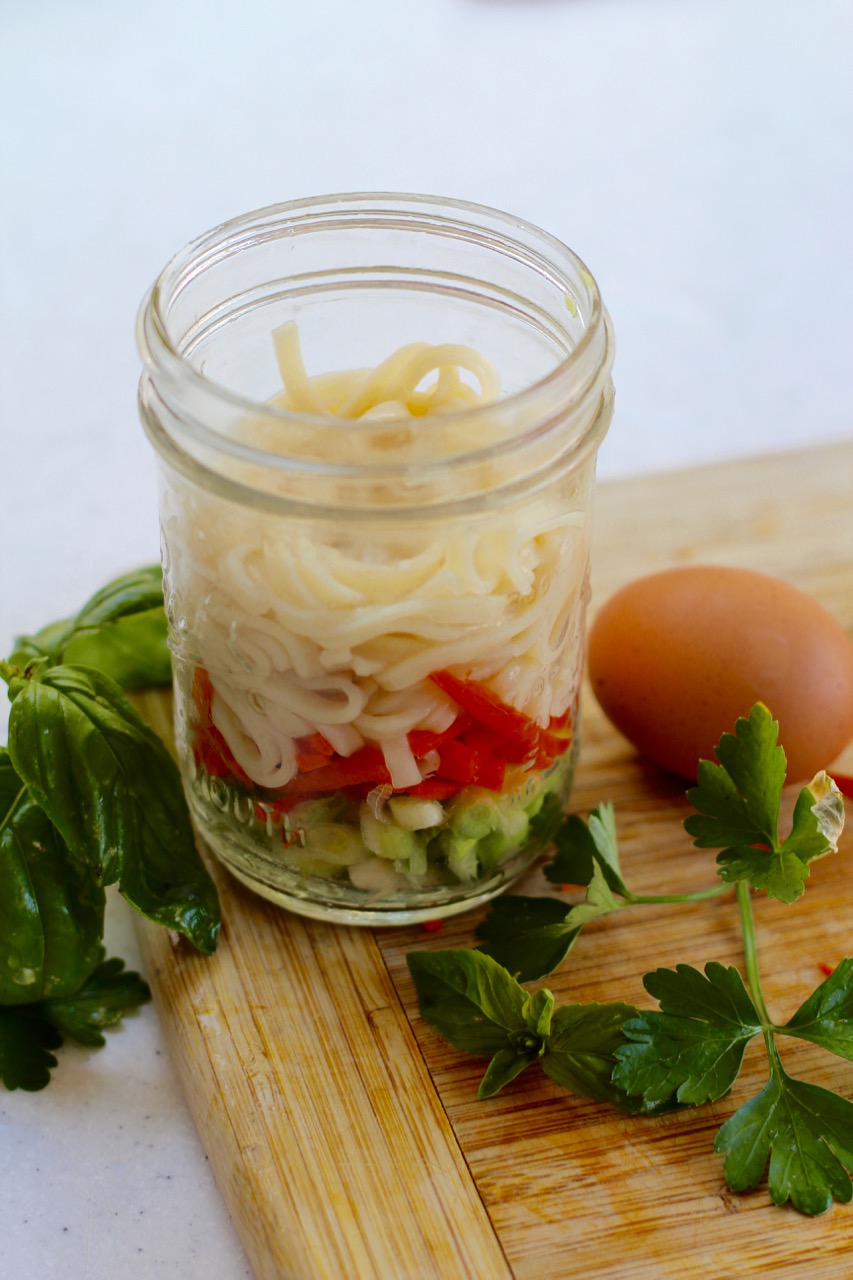 Don’t just dump in the fresh ingredients, though, because you don’t want them to get crushed. Lightly wrap the herbs and egg in a piece of plastic wrap…

Then tuck it on top of the noodles and screw on the lid. 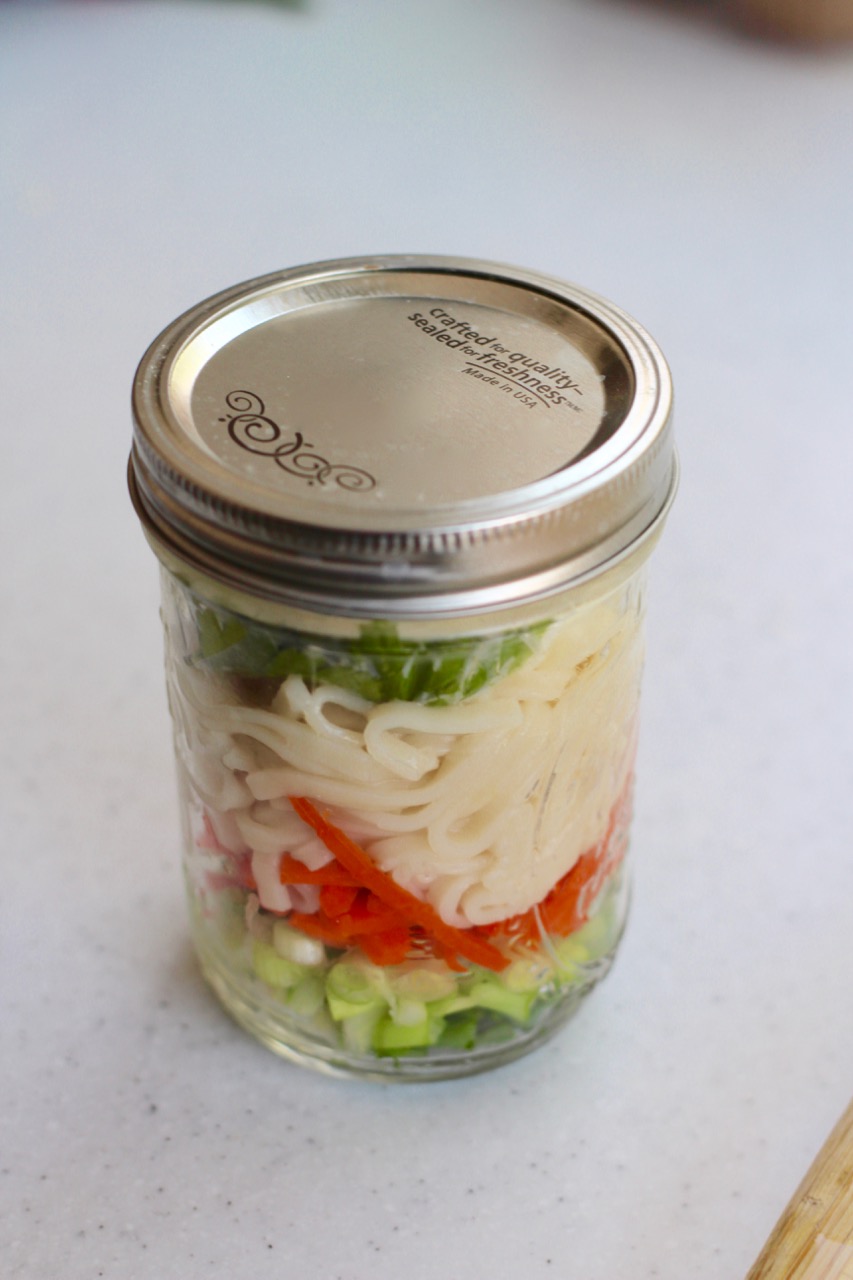 When you’re ready to eat your soup, remove the herb/egg parcel and pour in enough boiling water to reach the top of the jar. Stir the contents, then replace the lid and let the soup sit for a couple of minutes so the flavor paste can break up. Stir again, and top with fresh ingredients. 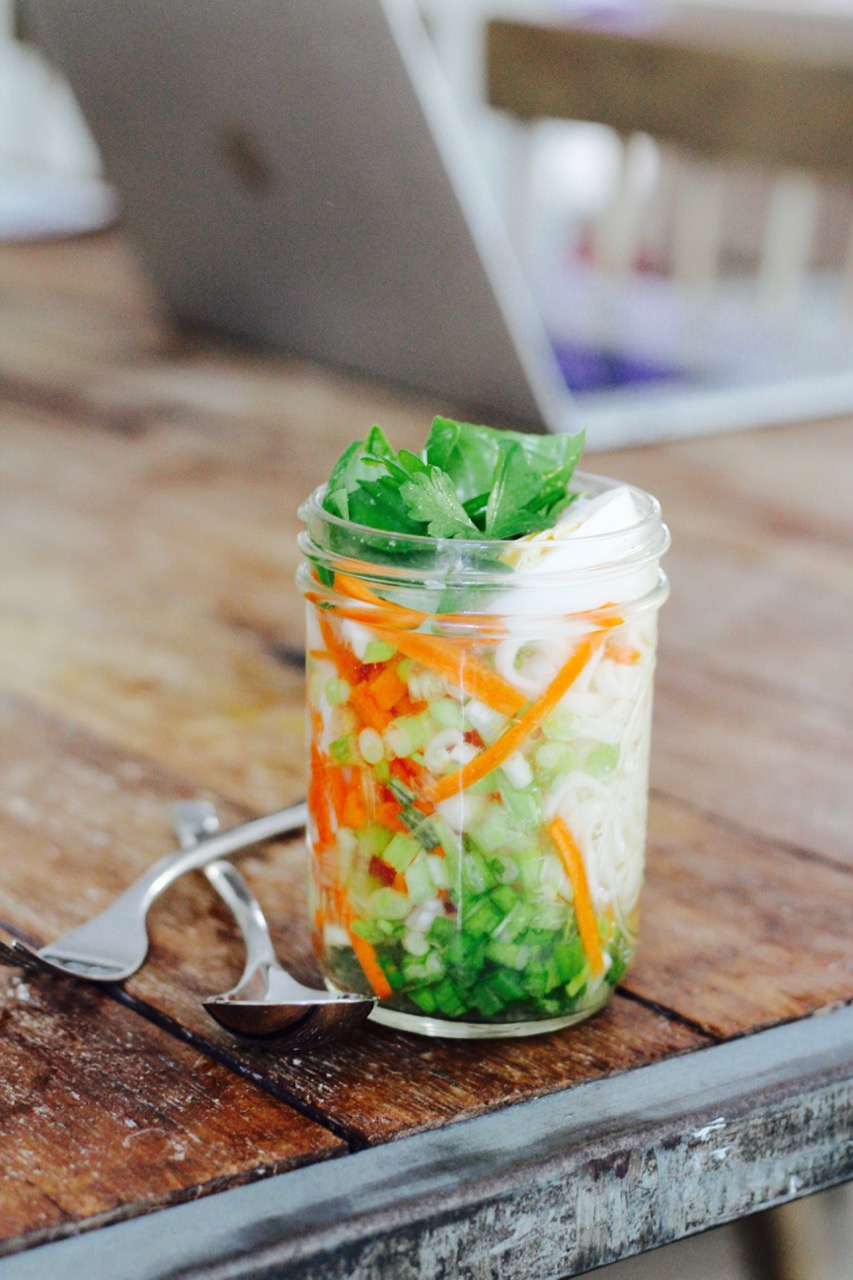 Eat straight from the jar, because that’s fun. 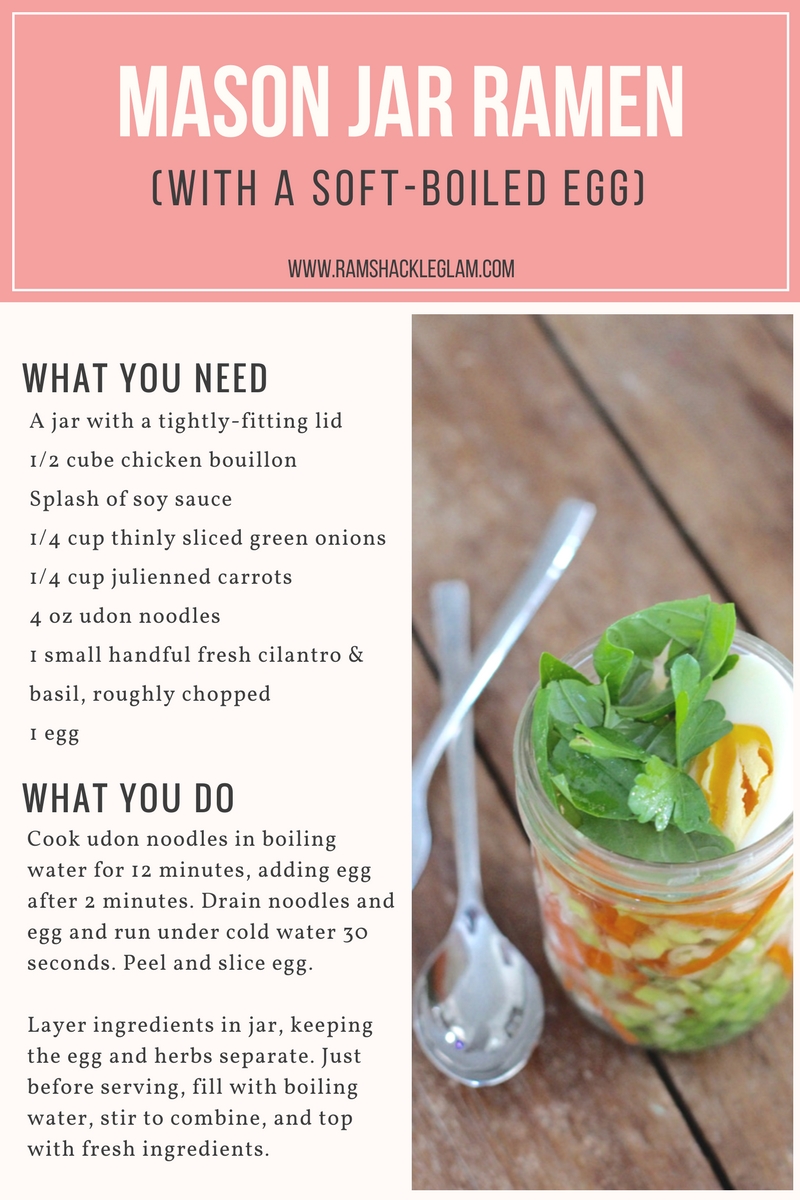