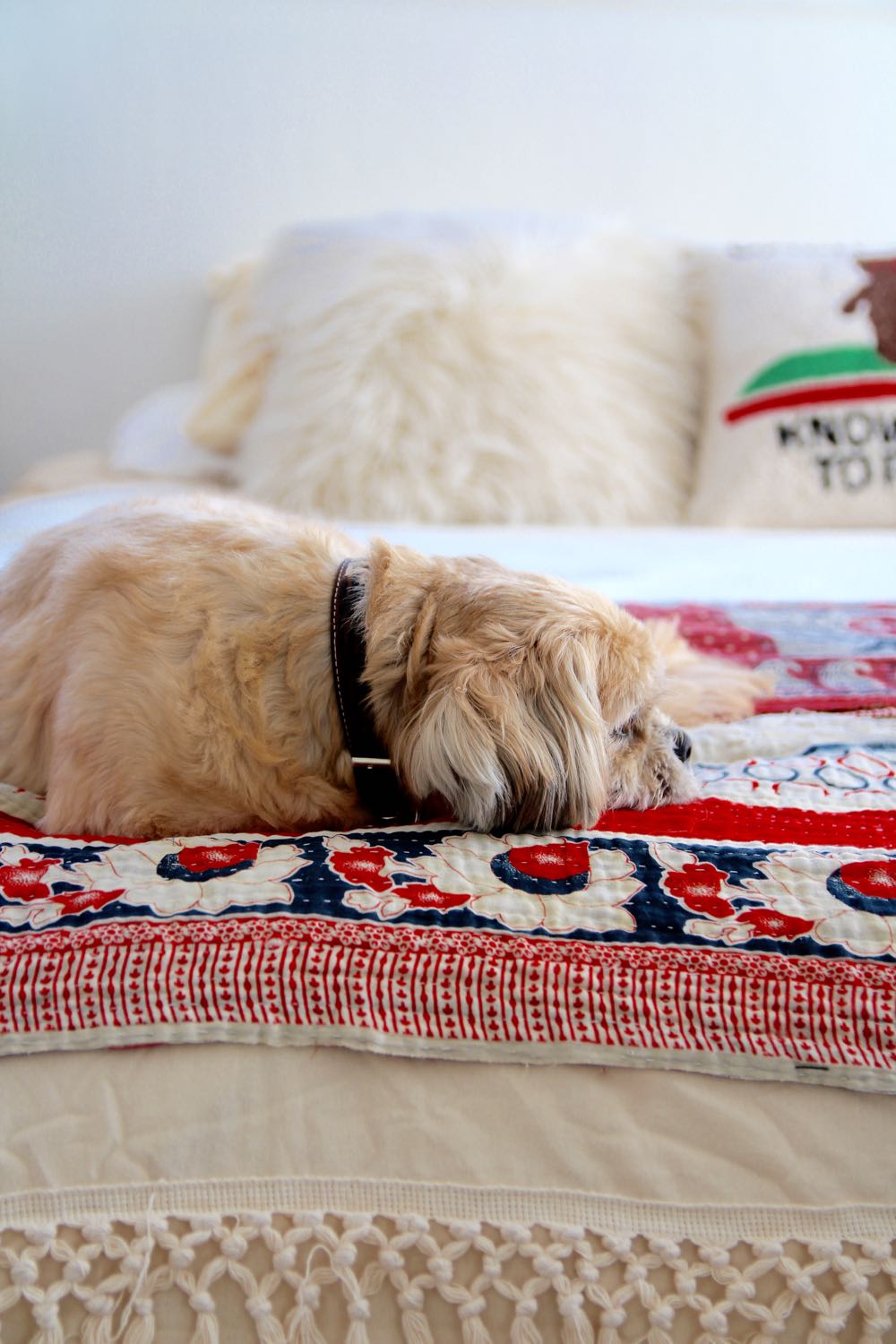 Get off my fancy new bed, Virgil.

This makes no sense, because our house is not, but apparently our internal thermostats are set to Opposite. All I want is a nice, gentle gust of fresh air, but it turns out that what I think of as “a refreshing cross-breeze” translates to “arctic blast” in Kendrick-speak. In the summer, what this means is that I sleep with no covers and six fans pointed in my direction while he huddles under the coverlet to guard against the 80-degree evening chill. In the winter, we are at an impasse. Because fiiiiine, I’ll close the windows and shut down the whole spectacularly lovely, breezy situation that our bedroom has the potential to enjoy, but even with the windows closed and a comforter on our bed, I routinely wake up to discover that my husband has pulled two or three extra blankets out of the linen closet and is ensconced underneath them as if he’s preparing for a new Ice Age.

The major problem here, of course, is that those extra blankets that he’s always piling on my bed are, excuuuuuse me, so not the aesthetic I was going for. 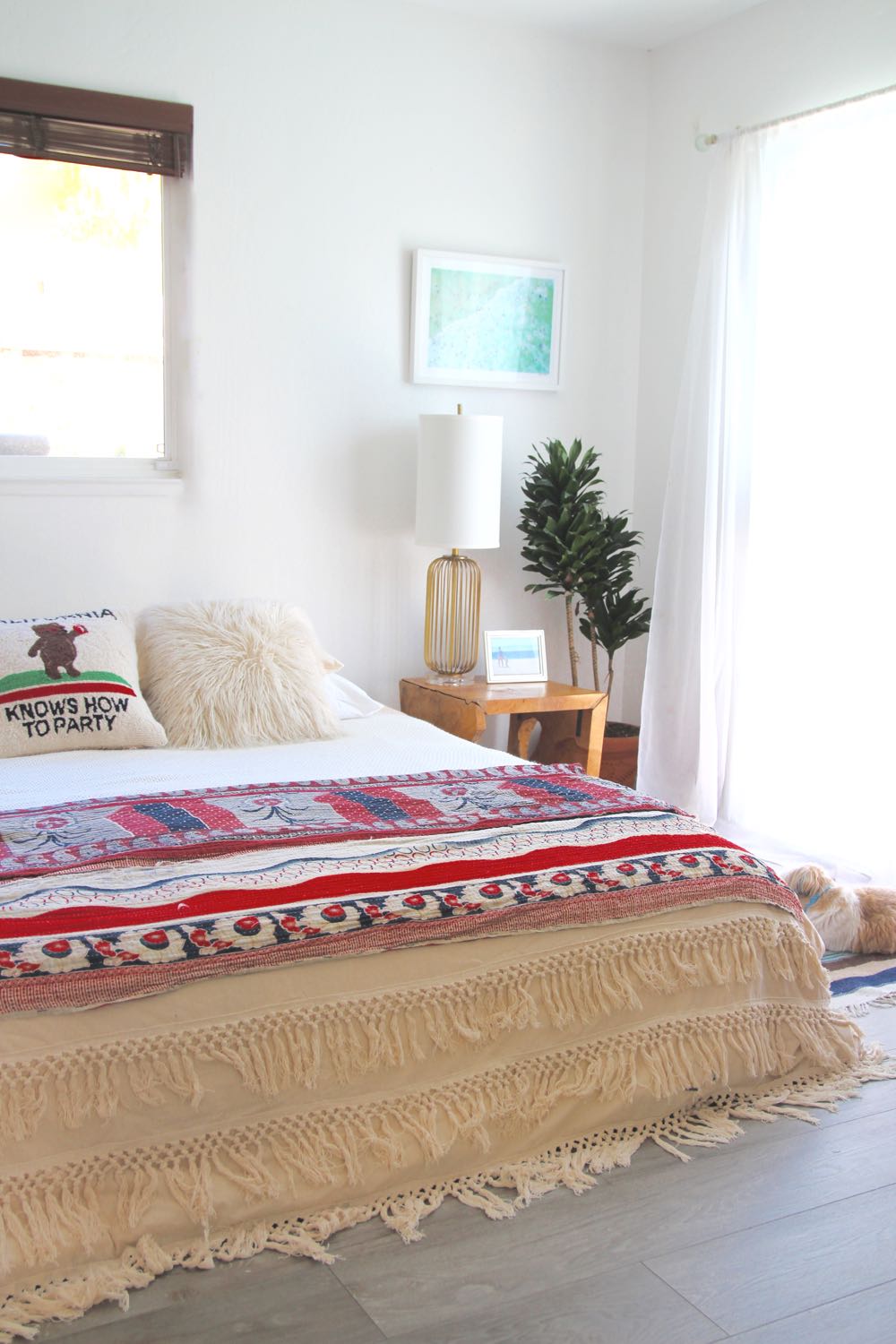 So I decided to do a seasonal bed makeover that would be lovely and cozy and layered for Kendrick, and still feel all California-y and breezy for me. I was going to do a layered winter whites look, but once I started playing around with a few new pieces and mixing them in with my older stuff, I came up with this kinda mismatched boho vibe largely inspired by this Instagram shot.

(OK, it’s not “inspired by” that Instagram shot. It’s an obvious attempt at straight-up replication.)

The Sheets: Fair-trade organic luxury bedding company Boll & Branch recently released a line of flannel bedding and sent over a sample for editorial consideration, and they are insaaaanely soft and cozy. I am so sorry to have to use the analogy “it’s like sleeping on a cloud”…but it is. I’ve never really owned a set of “big-girl” sheets – I’ve always just used a mishmosh of sheets that I’ve picked up here and there (in college, when we moved and needed something temporary, etc) – and these are exactly what I’ve been waiting for. They are perfect.

The Fringed Duvet Cover: That Instagram shot I mentioned? I’ve been lusting over the duvet cover pictured in it for the better part of a year, and finally decided to go ahead and purchase the damn thing because a) it’s pretty reasonably priced, and b) I started having actual dreams about it. This is obviously super weird and makes my internal fantasy life sound boring in the extreme, but there you go. I dream about bedding.

The Vintage Throw: On top of the duvet cover, I layered a white textured coverlet and a vintage kantha throw that I bought back in Westchester a couple of days before we moved. Kantha throws are hand-stitched, reversible, machine-washable blankets made with repurposed sari fabric, and come in bazillions of beautiful colors and patterns. Everyone should probably own one or ten.

The Floofy Pillows: Why are fuzzy white throw pillows (sometimes called “alpaca,” sometimes “sheepskin,” and sometimes “flokati,” although I prefer the term “floofy”) like the ones pictured here so freakin expensive? ‘Tis a question for the ages. But if you do some hunting, you can find faux versions that look exactly like the real ones for wayyyyy less. Mine were $13 each, which is much better than $300. But that’s just one girl’s opinion.

California Knows How To Party: This pillow is obviously the best purchase I have made in recent history, or possibly ever. 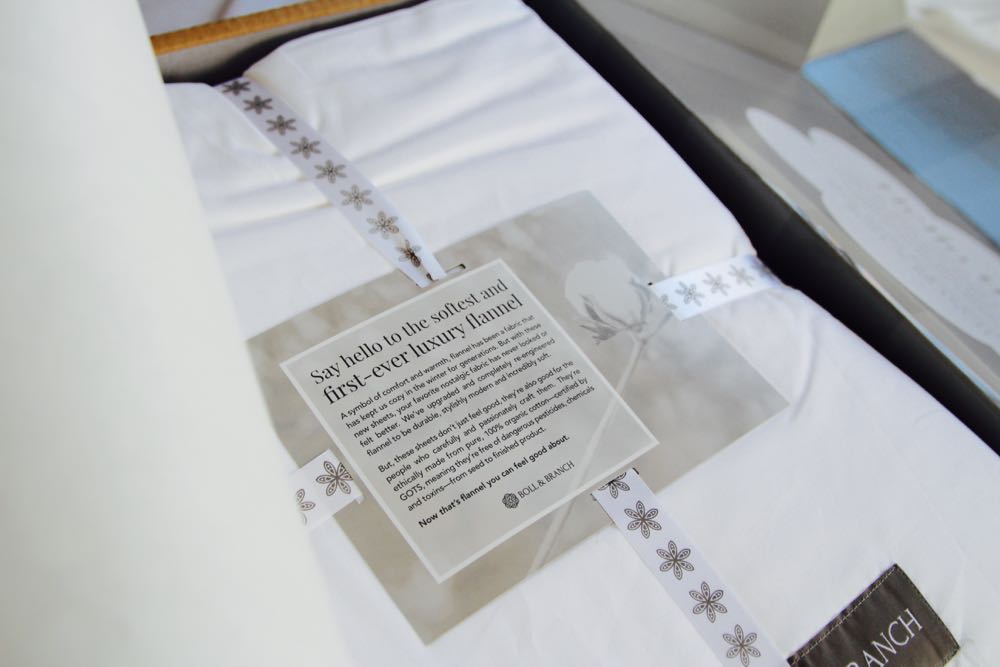 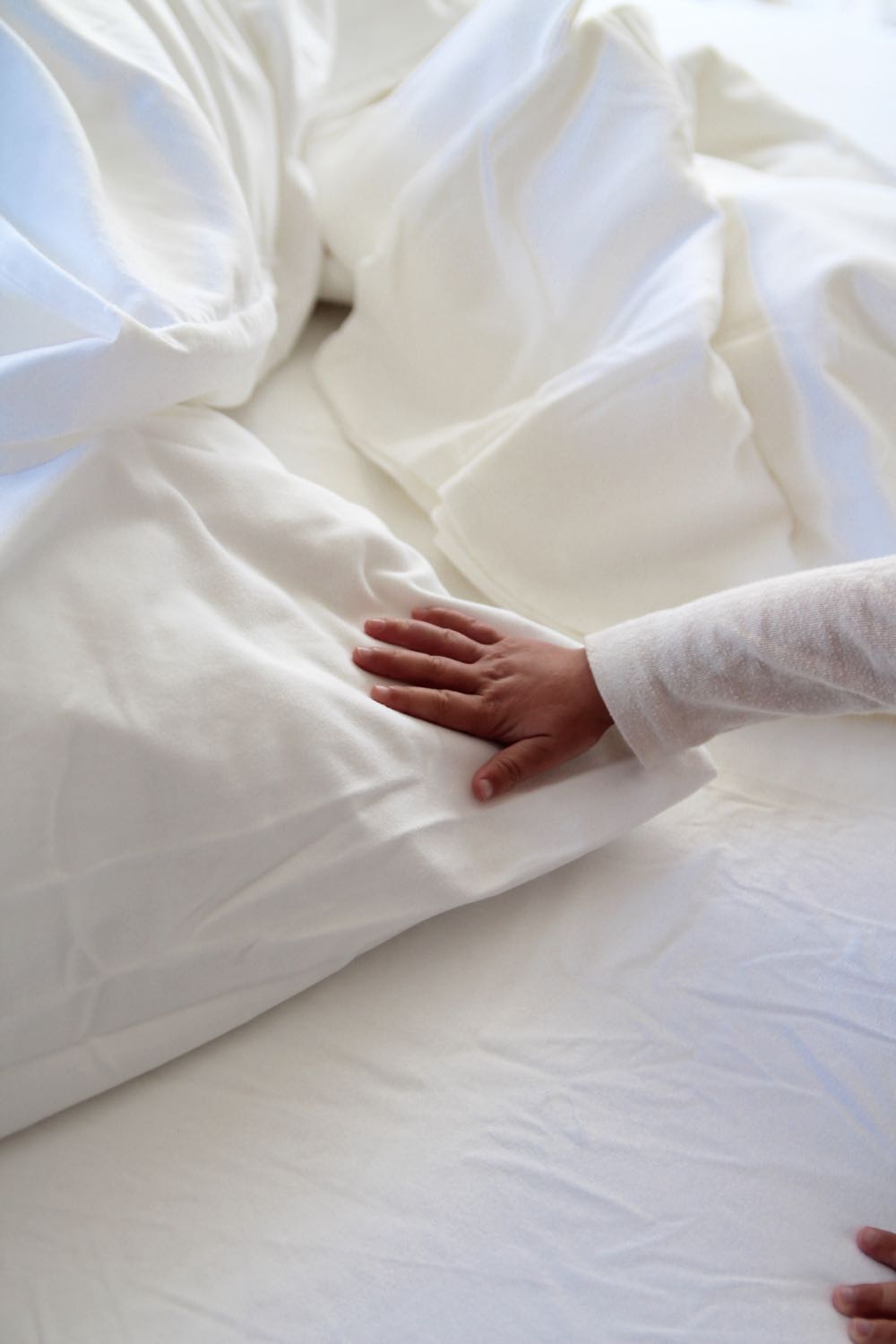 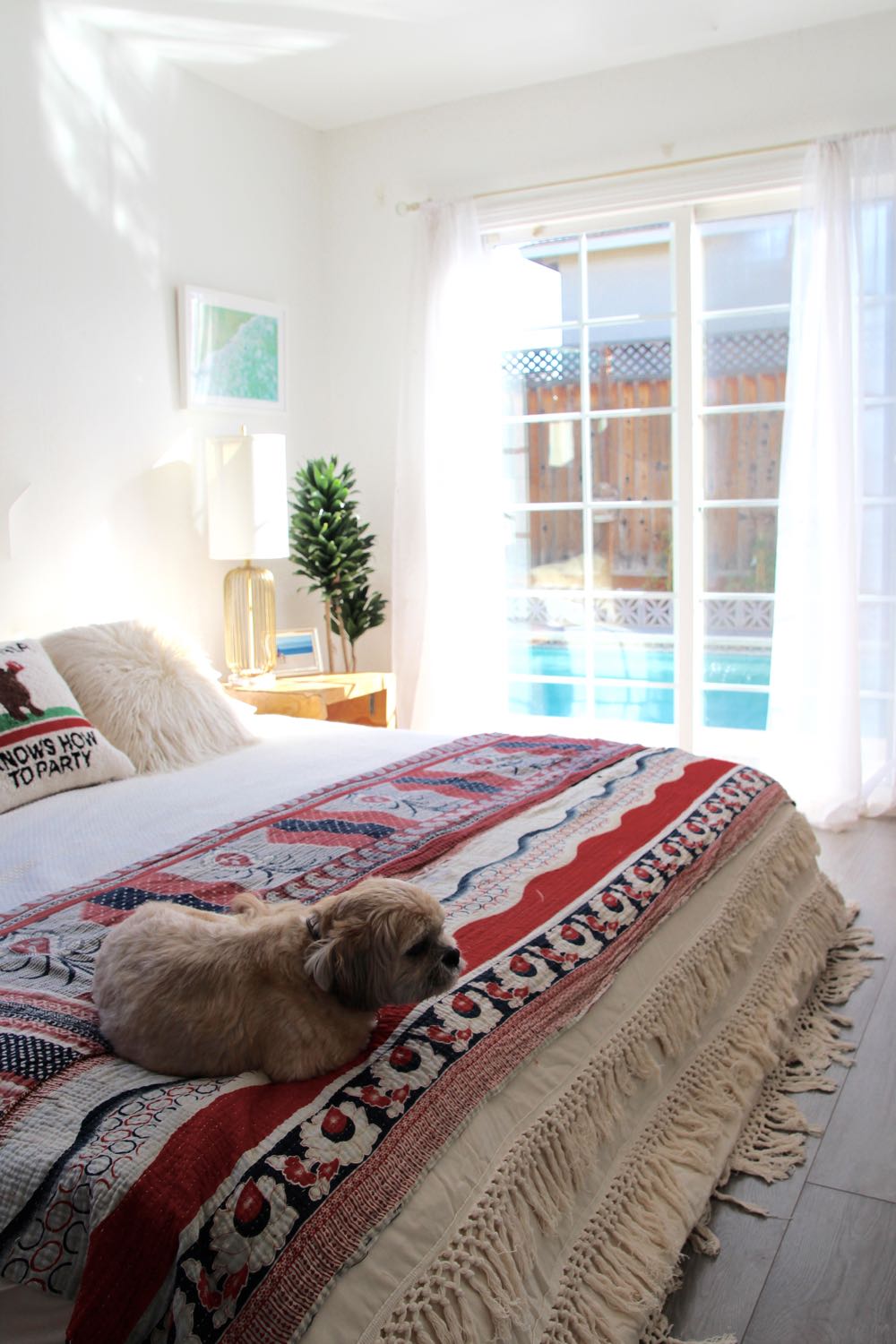 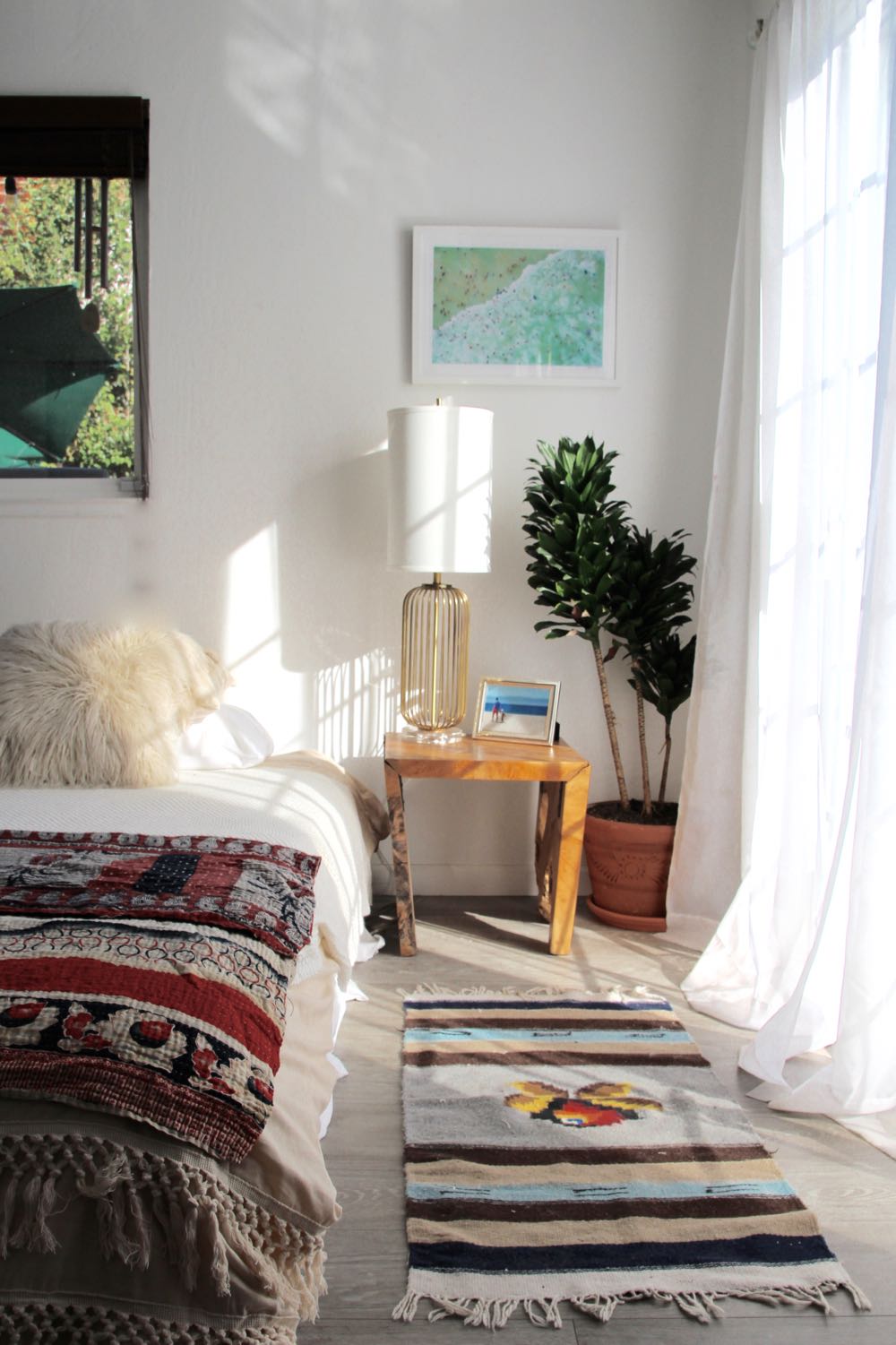 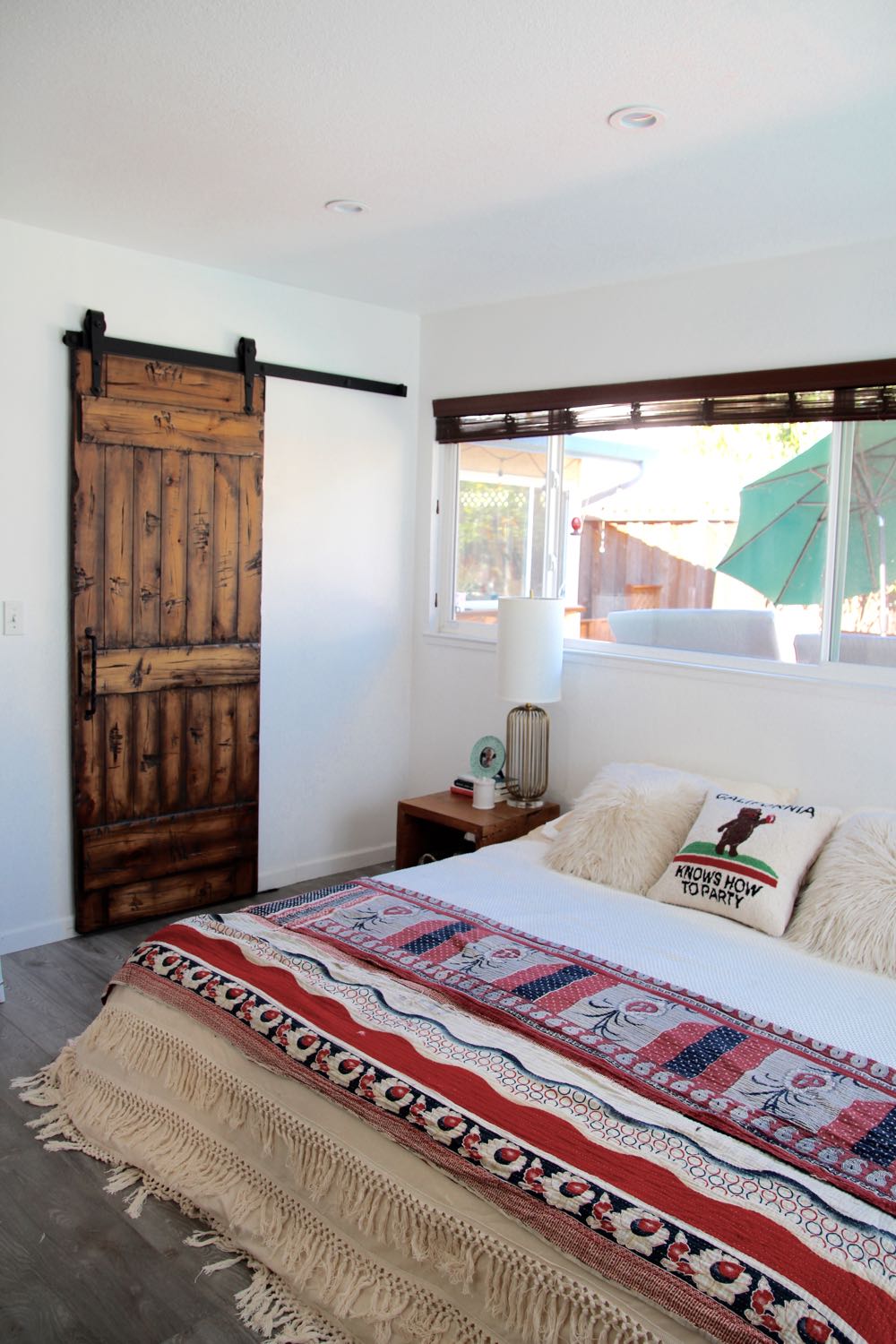 Boll & Branch sample provided c/o. All other products my own.