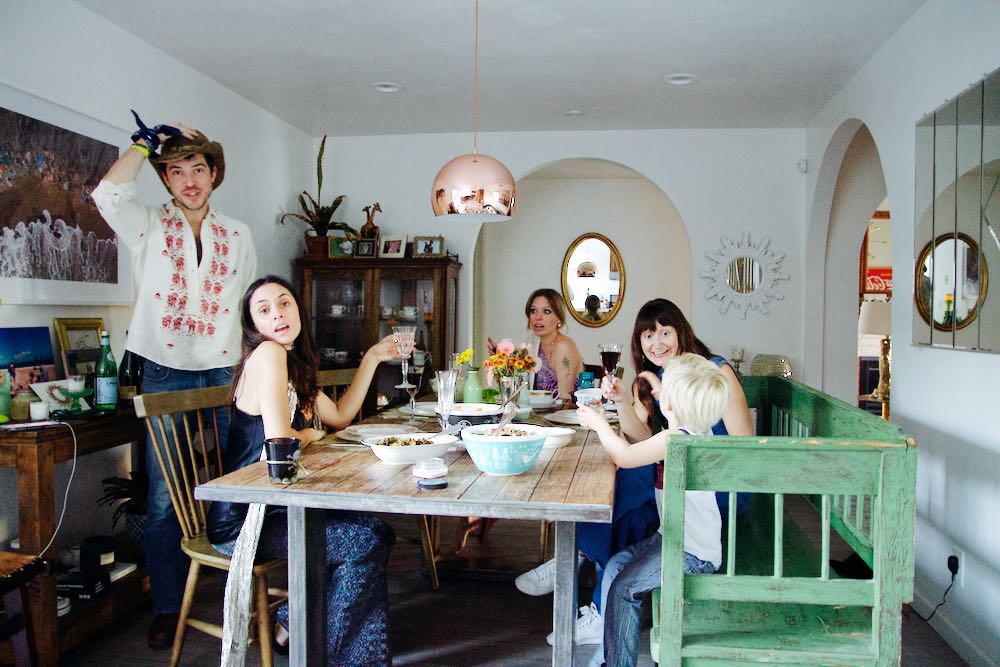 Oh my GOD that was a fun Thanksgiving. Technically a “friendsgiving,” I suppose, although Pinterest has made me so tired of that word that I cringe even writing it. We couldn’t go to Ohio or New York for a variety of reasons, so a few of our East Coast-transplant friends decided to drive up for LA for a full weekend of celebrating. (They only stayed through Friday, but then the whole group of us ended up driving back down to Southern California to celebrate Thanksgiving Take 2 with my parents, who were stopping through on their way back to New York, so we kept the party going. Right now I’m sitting at the kitchen table in my dad’s apartment in Pasadena while my kids eat Einstein’s bagels on the couch. It’s nice.)

The thing about this particular group of friends – Kendrick, myself, Paige, Francesca, and Francesca’s brother Mookie – is that we’ve all known each other for so long that there is virtually nothing that any of us could do that would come as a shock to the others. We’ve seen each other through some of our very hardest (and wildest) years, so I could probably wander through the house naked wearing a frog on my head, and no one would think that was especially out of character (it wouldn’t be, except I’d much prefer, say, a kitten to a frog if we’re talking animals being worn on one’s head).

So, for example, when Francesca decided that we needed to have a 1970s Keith Richards-esque dress code for the day (mostly because she had just bought sparkly silver bellbottoms and wanted an excuse to wear them)? We were all on board that boat in about two seconds flat. Full-on dance party to Bohemian Rhapsody? You better believe it. And when, for no apparent reason at all, I decided that doing the limbo sounded like a good idea and came out holding the long stick that has inexplicably been sitting in the corner of our garage ever since we moved in, just waiting for a perfect Limbo Moment?

I love these people. Talk about your found family. 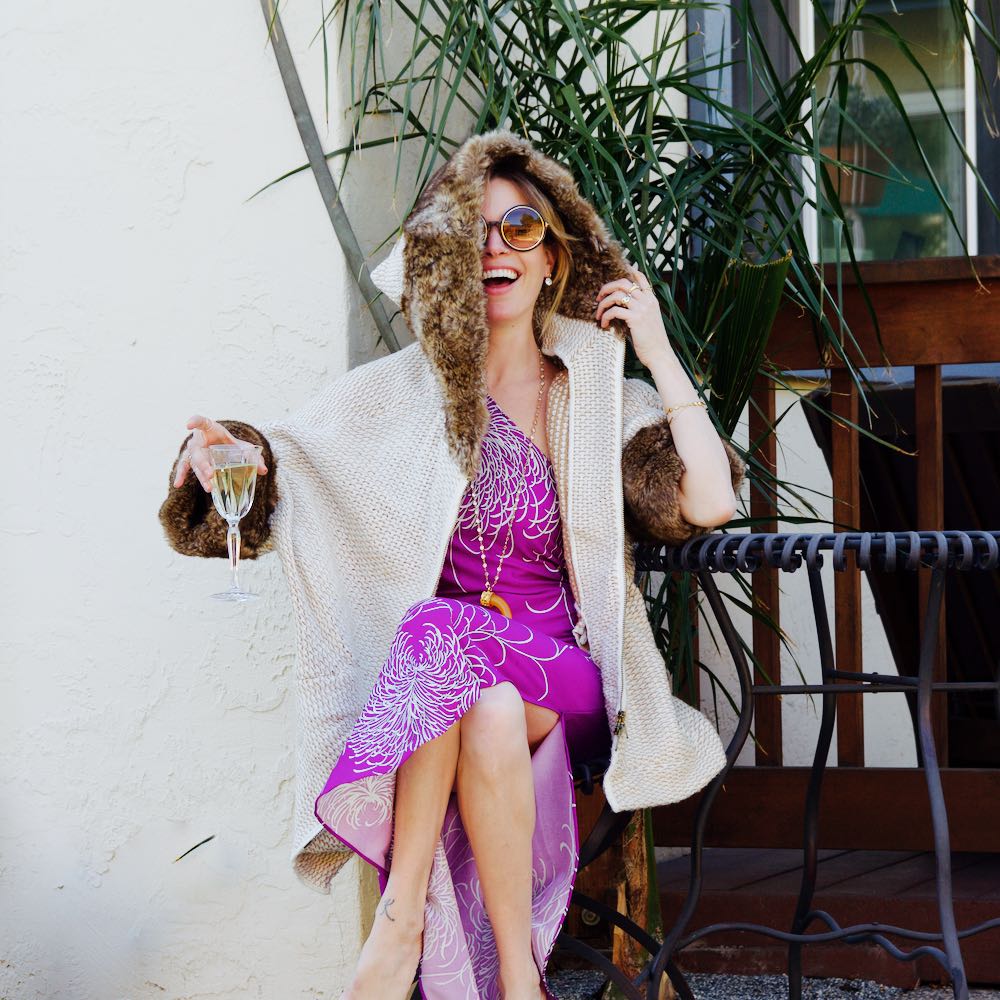 This is what I came up with for my thematic attire: my grandmother’s one-shoulder sarongish thing and a large woodland creature wrapped around my upper body. (What you don’t see are the hot pink fluffy slippers that went on shortly afterwards because my feet were cold; I think they gave the whole look just that extra dose of crazy it needed. 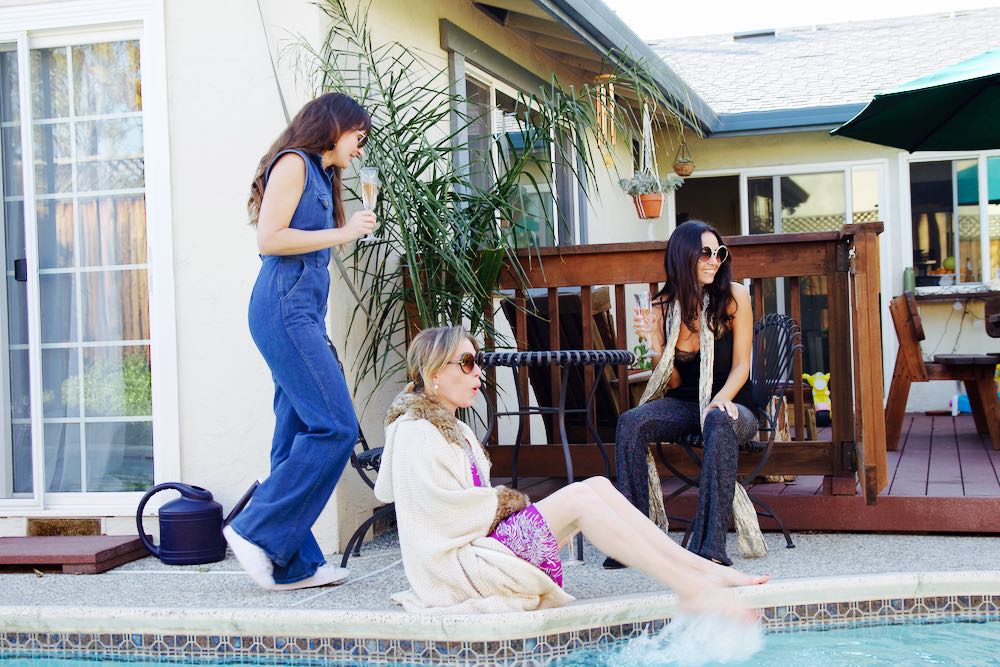 Ooh that pool was cold. 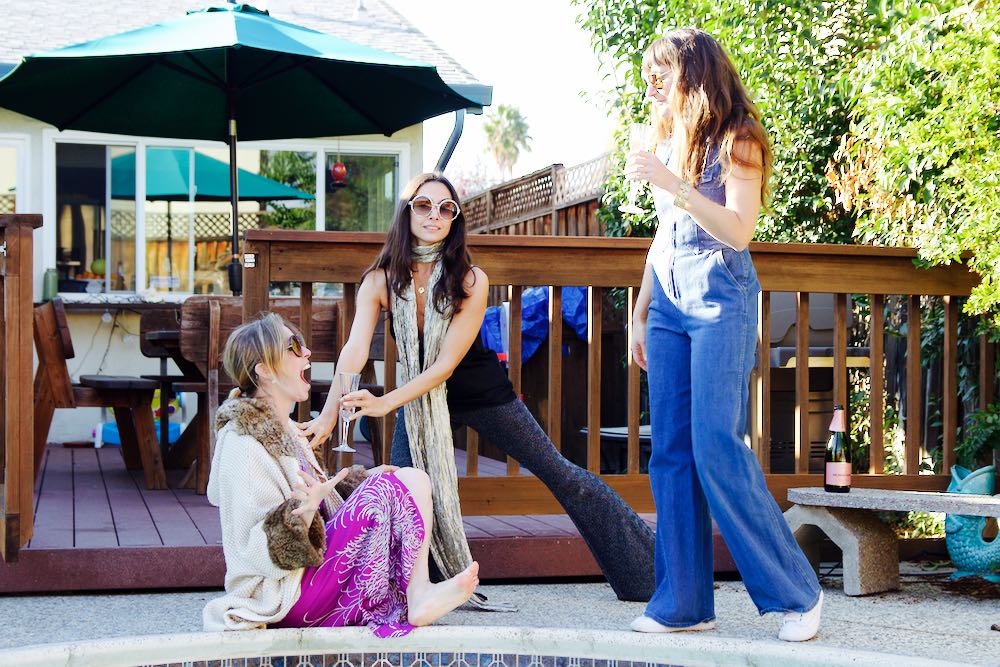 I have no idea what’s happening here. 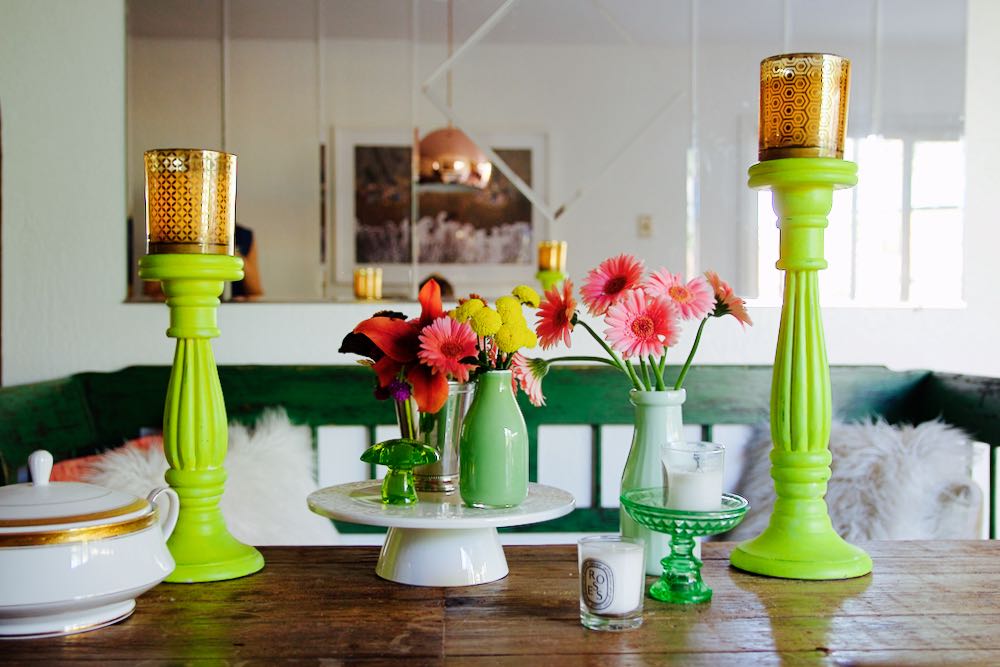 Wow, is this ever not a Thanksgiving-ish tablescape. Don’t care; the more neon yellow and pink the better. 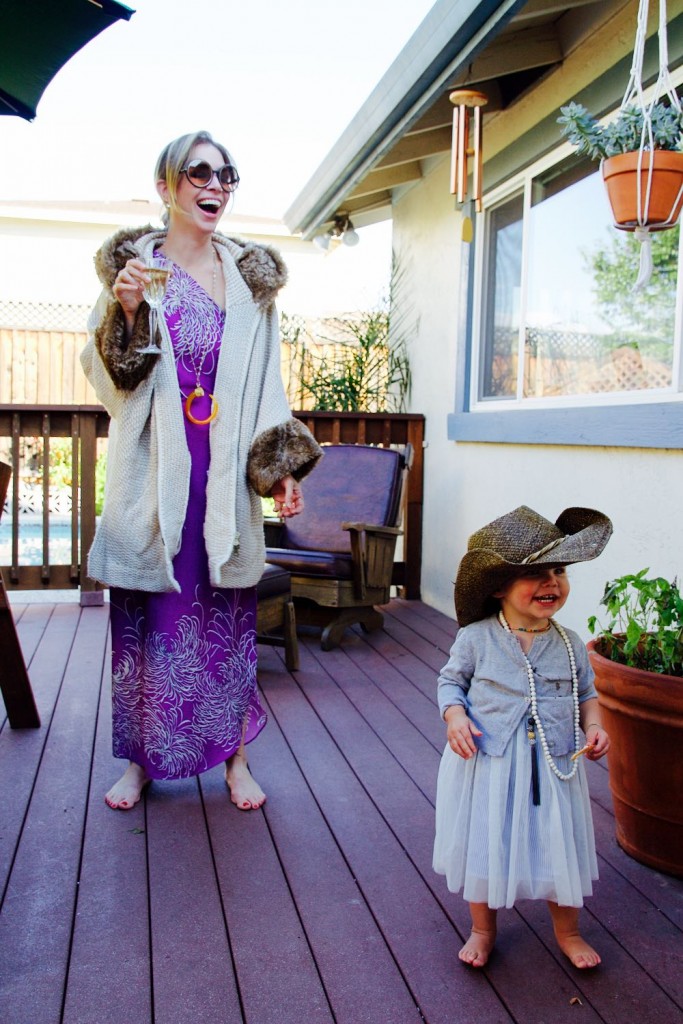 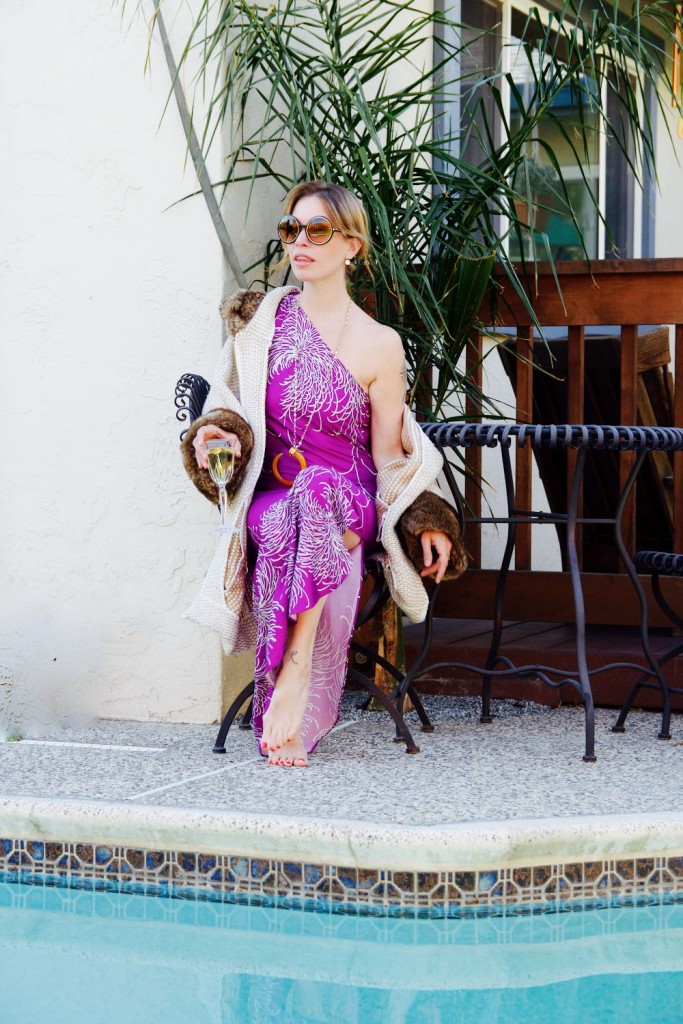 Oh, just casually posing by the pool. In a gown and a Wookie coat. 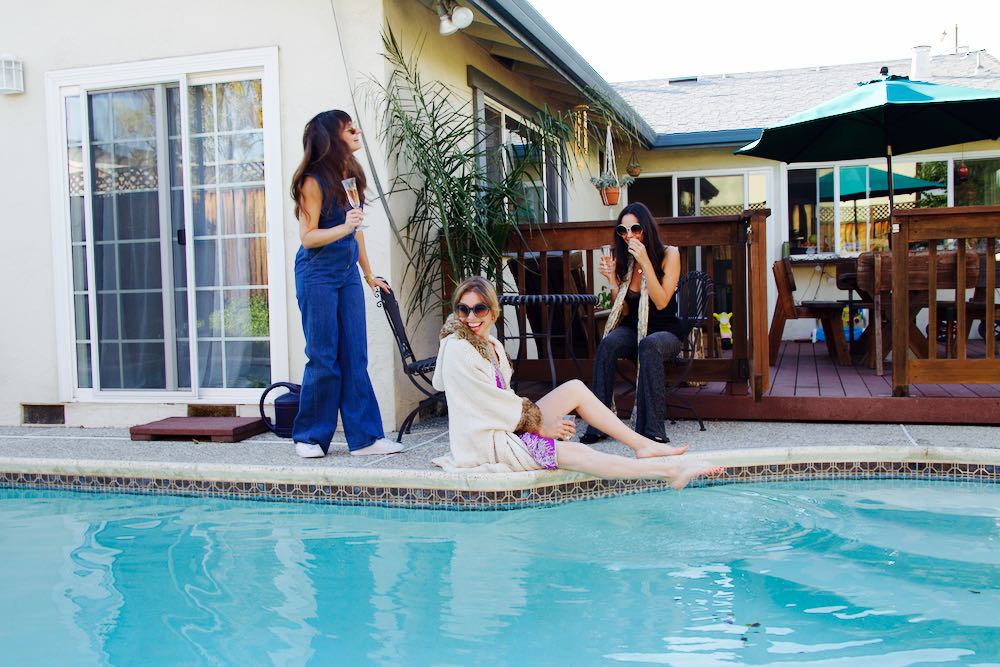 These girls are my everything. 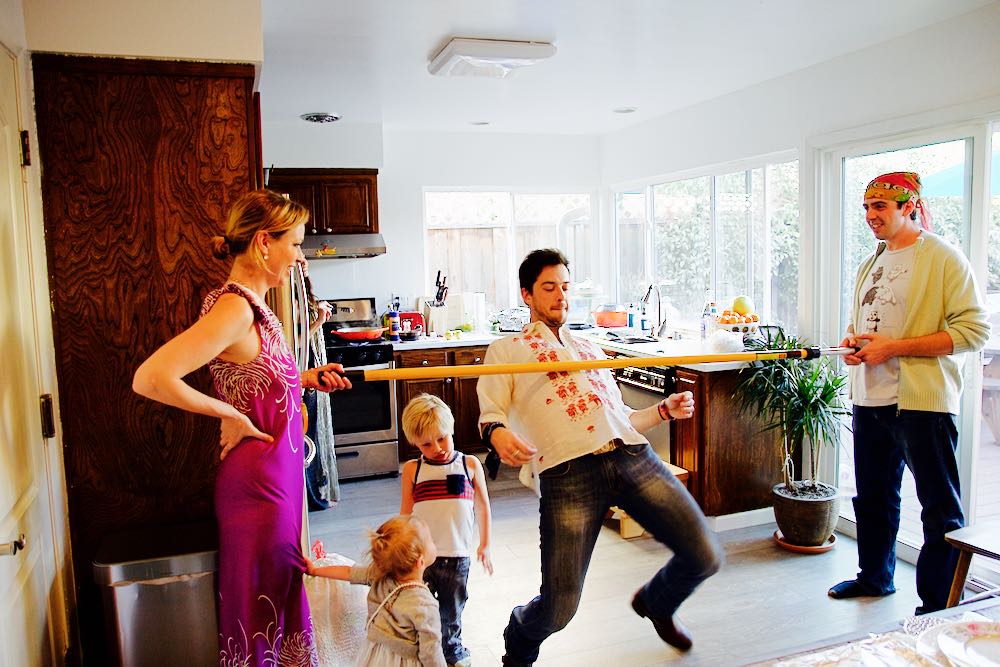 Remember when I said a limbo party just kind of happened? Proof. 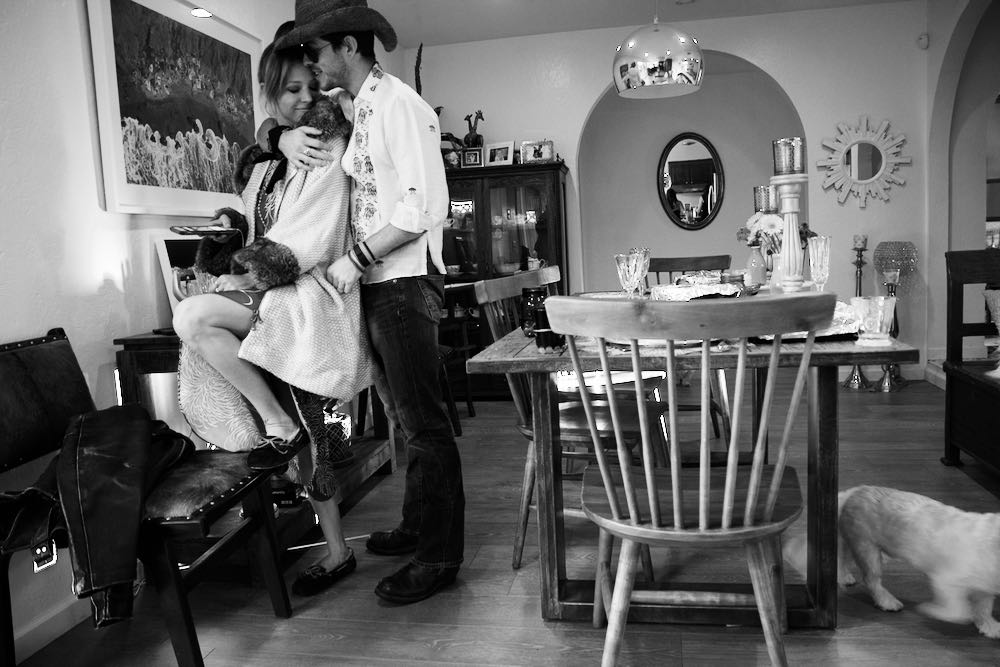 This photo makes me happy. What makes me even happier is that Indy took it.

And now, allow me to present to you the very best group photo that I could find of the 10,000 that we took with a timer while actually seated around the dinner table. We’re missing two people, Paige looks like she’s thinking about eating Indy, and I look like I just saw Arnold Schwarzenegger wander through our dining room. Apparently this is the best we could do.

It’s a pretty good summation of the whole experience: ridiculous, messy, and a hell of a lot of fun.