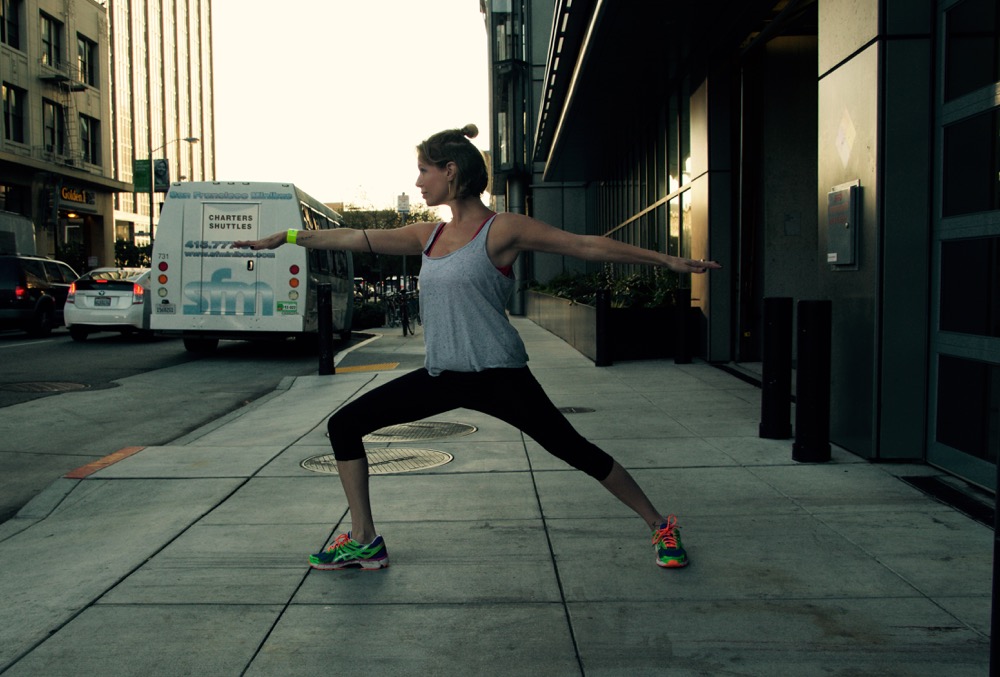 Stretching in the sunrise before entering the madness.

I have never in my life been to a rave.

I think there was a period of time around age 25 when I really wanted to go to one, but for whatever reason (probably that I panic when it gets too late and my bed is still far away from me) it never happened.

Who would have thought that I would attend my very first rave as a 34-year-old mother of two? Or that it would take place at seven o’clock in the morning? (It actually started at six-thirty, but I got stuck in traffic.)

I went on behalf of St. Ives, who was providing attendees with “refresh stations” in the bathroom stocked with face scrubs and body lotions (including their very lovely new Refresh & Revive Pear Nectar & Soy Body Lotion) and “hydration stations” with spa waters inspired by St. Ives products. They were also giving away one of my personal staples, the Oatmeal & Shea Butter Body Wash. The goal of all this: to inspire people to wake up their senses and live radiantly, in ways both simple (using an energizing body wash) and…well, more elaborate. Like attending a sunrise dance party.

So here’s what happened: Just as the sun came up, I got out of my car on a silent, empty street somewhere in downtown San Francisco. I stood there turning in awkward circles, trying to figure out which direction I was supposed to go in – and then a girl walked past me with glitter body paint covering her arms, so that answered that. I trailed her down the street, toward the sound of thumping EDM coming from what looked like a shuttered bar. I got in line behind a woman wearing giraffe ears and John Lennon sunglasses, and immediately felt wildly out of place in my little yoga pants and tank top (do neon sneakers count as exciting attire? …no?). In my defense, I’d chosen my attire because the morning was all about wellness and included a yoga class, but still. Still.

But if I was feeling out of place on line, oh, just wait – because seconds later I walked into a full-on dance party. A DJ spun techno in a booth while dancers on a platform jumped through fluorescent-lit hula-hoops and twirled batons. The people crowding the floor were pouring sweat, arms in the air, really dancing, taking quick breaks for spa water and then heading back for more.

I had pictured ten or twenty people milling around sort of lazily doing downward dogs. I was not prepared for this.

I think I looked as terrified as I felt, because the next thing that happened was that the guy standing by the door wearing pink spandex and a pair of fairy wings asked me if I wanted a hug. (I did.) 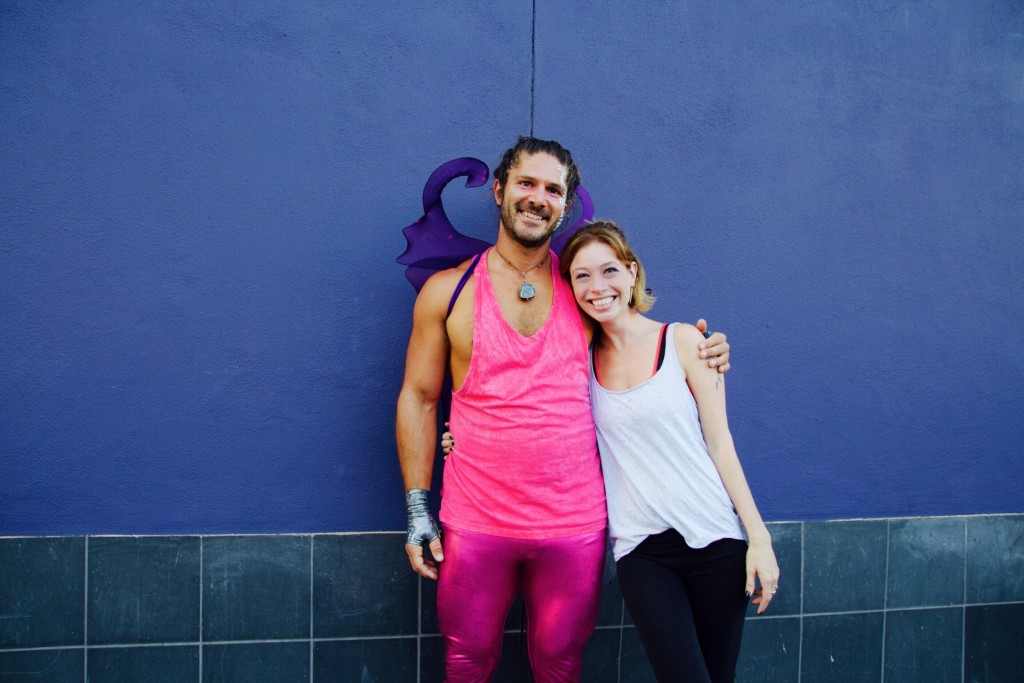 Got a hug from this guy.

So yeah, I was nervous. As one tends to be when presented with a room full of spinning strangers in animal print. But then I thought: you know what? This morning-rave culture may not be something I’ve ever been exposed to before – not something I even knew existed, honestly – but when I took a step back and looked at the scene for what it was, I realized that walking into that bar was like walking into a warehouse of happiness. And so I decided to just go ahead and get over myself and enjoy the damn party.

Because for real: it was like everything wonderful about clubbing – inclusiveness, joy, abandon – minus the potentially negative stuff (meaning the drinking and drugs that so often go along with late-night dancing). This is a community of people who wake up at the crack of dawn to put on angel wings, neon bellbottoms, animal tails and glitter, grab a coffee and a couple of glo sticks, and then dance (and I do mean DANCE) while the sun comes up, then run home, shower, and go off to wherever the rest of their day is taking them. People were hugging. They were happy. There was a pregnant woman (also in yoga pants) who came with her partner and sound-cancelling-headphone-wearing two-year-old. What a freaking cool mom.

Everyone there was about wellness and happiness and excitement about nothing bigger than the fact that it was a new day. What an awesome thing to be part of, even if just for one morning.

So I wandered over to the breakfast bar and ate some avocado toast with bacon. I drank some cucumber water. I got a massage.

And then do you know what I did?

(Okay, just for two songs. But it still counts.) 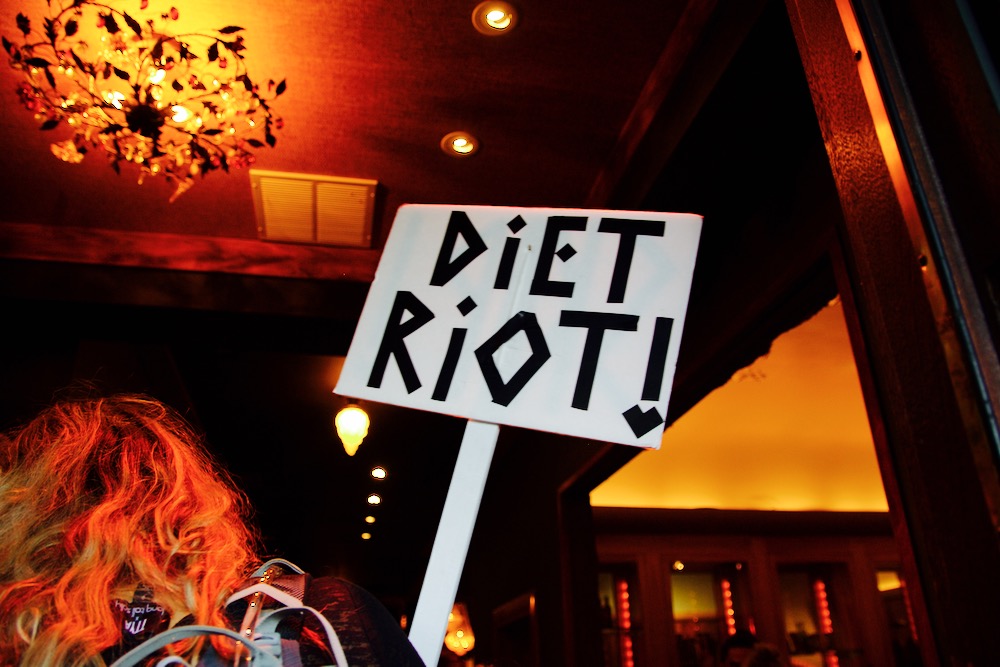 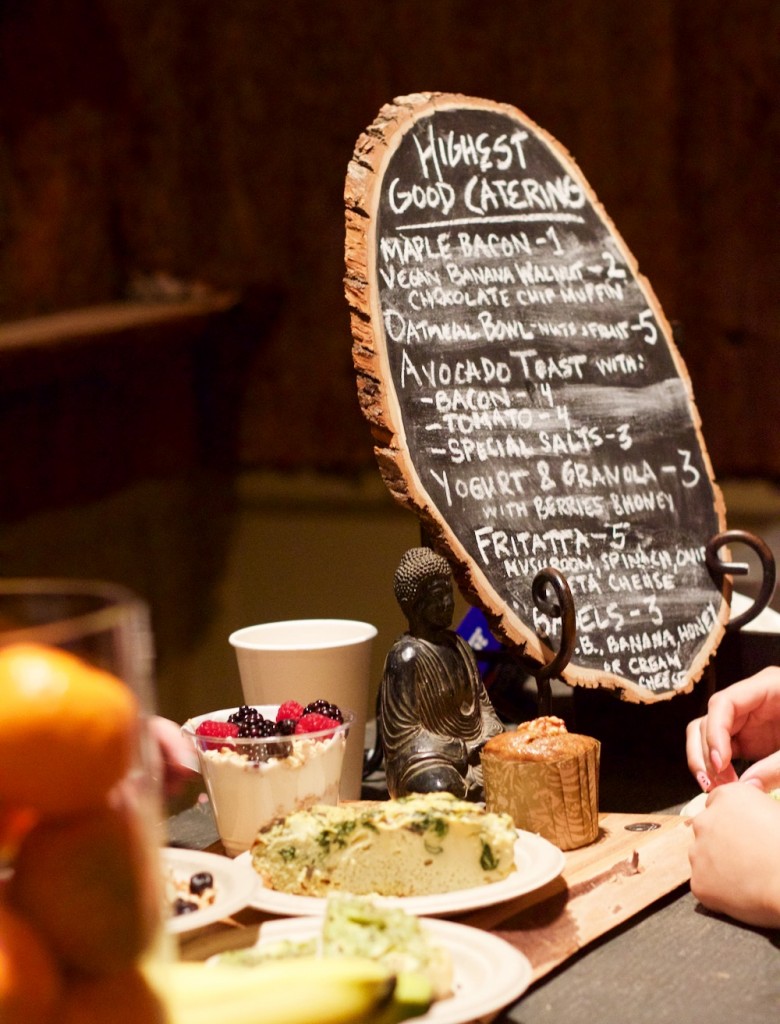 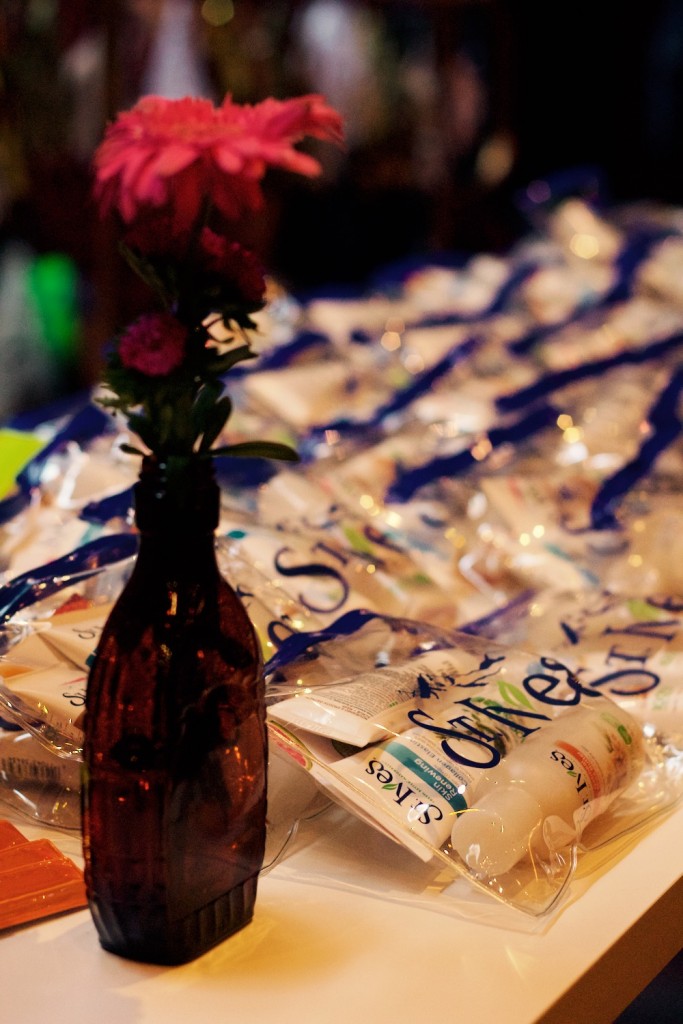 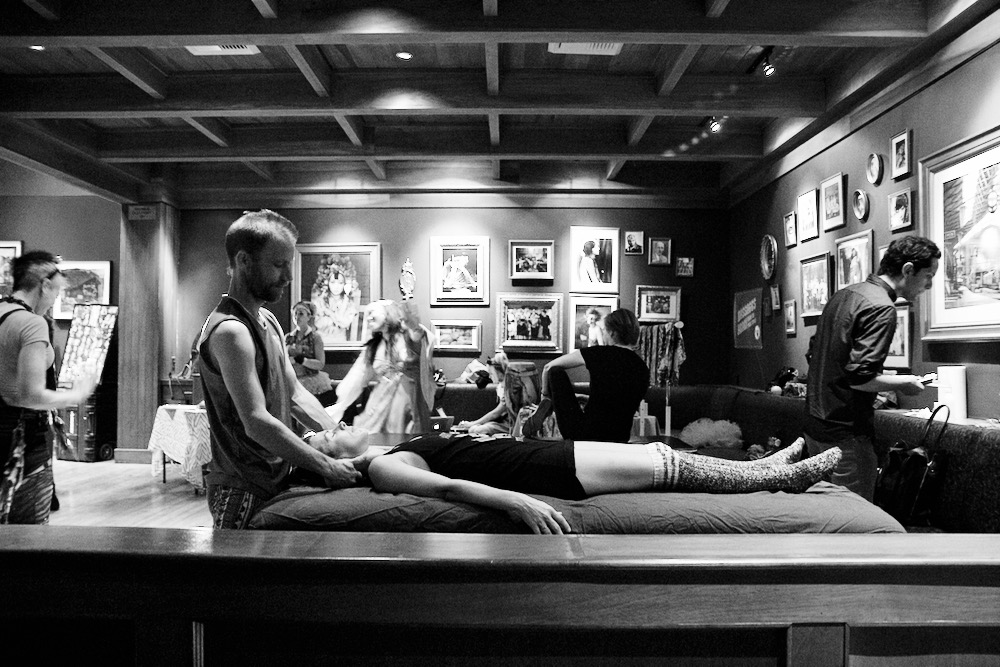 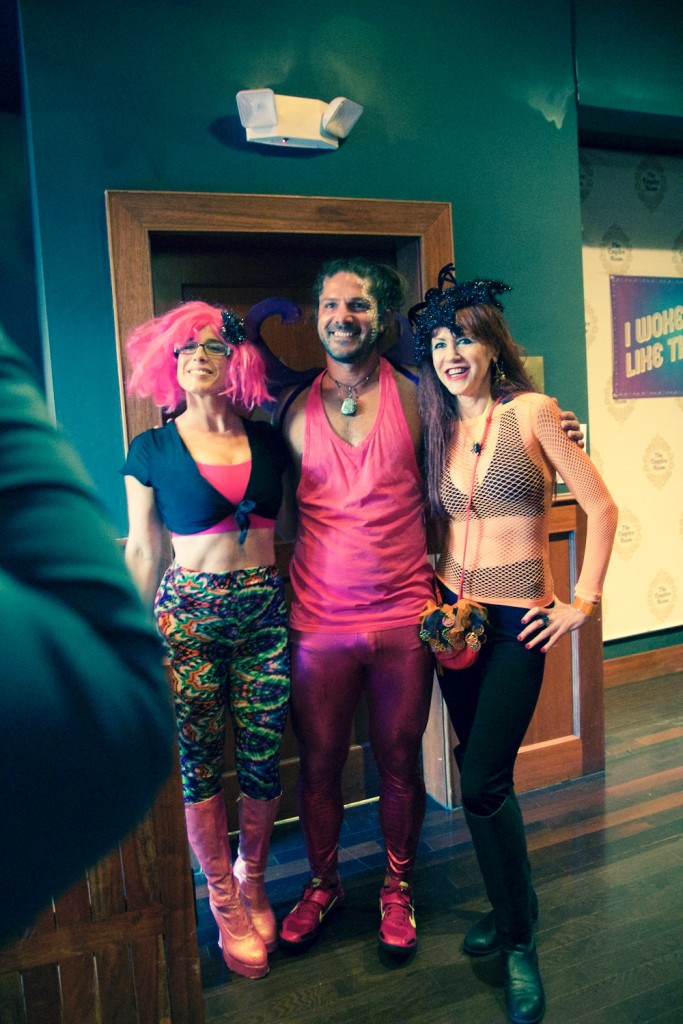 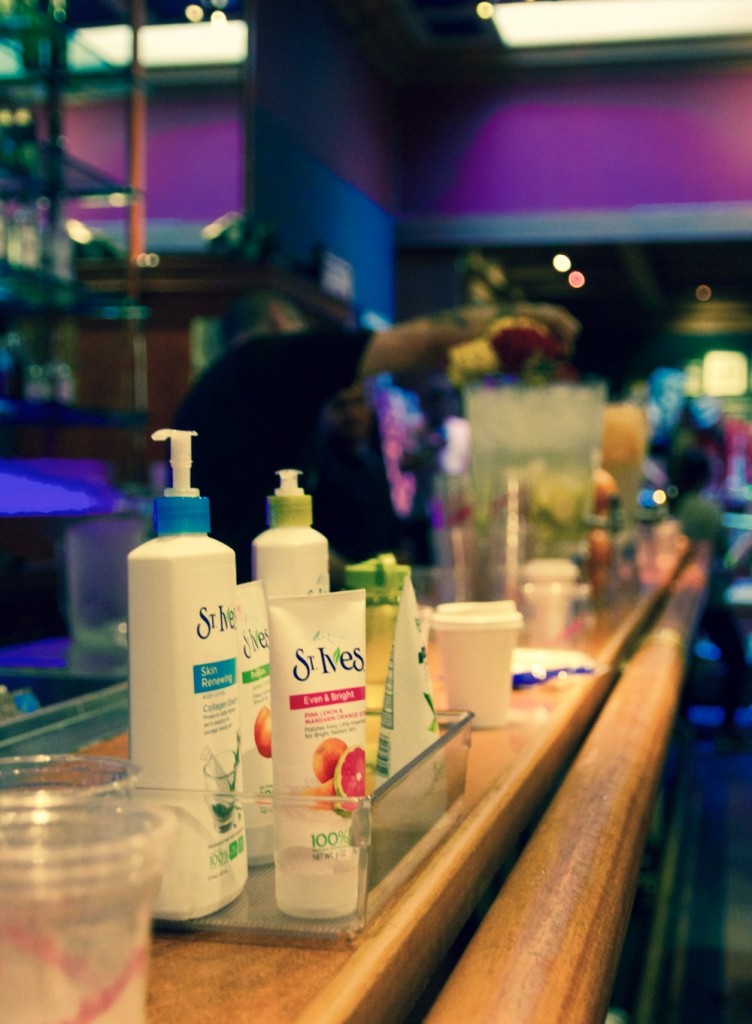 This post was created in collaboration with St. Ives.