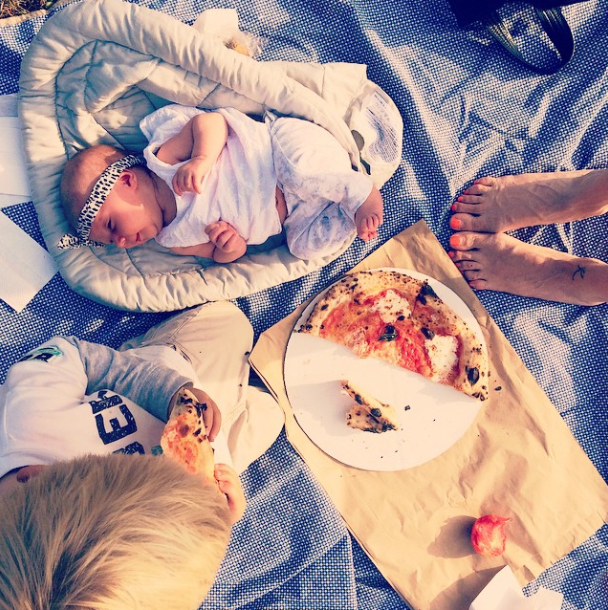 I have to admit: I was terrified at the idea of venturing out into the world with two children. I worried that both would cry at the same time and I wouldn’t know who to go to first; I worried that my son would go running off somewhere and I’d be dealing with the baby and not notice; I worried that two kids would be so much to handle that I wouldn’t be able to handle anything else…like whatever it was I’d theoretically gone out to do; grocery shopping or picking up dry cleaning or grabbing dinner.

I worried that I simply wouldn’t have enough hands to carry all that stuff.

When Kendrick’s around, we can sort of divide and conquer…but when I’m on my own with two (and I am, a lot of the time)? Wouldn’t it just be easier to…stay home?

Only problem: I don’t want to stay home. Not all the time. More importantly, our son certainly doesn’t want to stay home, not when there’s beautiful almost-fall weather outside and playgrounds to run around in and farmers markets to go to one last time before they close for the season. So even though I was nervous about how to go out into the world when I’m outnumbered, I decided to go ahead and put on my brave face. I started small, with trips to the playground across the street from our apartment in California, or short outings to grab ice cream, but yesterday the three of us went out for a long picnic in the park followed by a trip to the playground, and today I’m taking both kids into the city for an overnight stay, and it’ll be fun or it won’t be, but one thing I’m certain of is that it’ll be fine.

Because the important thing – the thing I’m not sure I knew the first time around but certainly do now – is that it’s so much less important to have everything go just as planned than to just go. Get out and do it, whatever “it” is, and if kids cry or something spills or everything falls out of your bag and you end up on your hands and knees scooping up pacifiers and tampons and business cards into your tote bag while trying to calm down a screaming baby and a toddler who wants to go home right now and fantastic, now he’s collapsed onto the ground…

I mean really: so what? It’s hard and maybe a little embarrassing, and maybe you even cry a bit, too, and that’s okay, because in a few minutes it’s over and you’re on to the next thing. Much worse than a few tears, to me, would be the sense that I’ve put our lives on pause because I’m anxious about what “might” happen.

And so out into the world we’ve been going, the three of us. I put the baby in the carrier and hold my son’s hand and try to pack the absolute bare minimum into my diaper bag, and sometimes they both need me at the same time and sometimes they want something that I forgot to bring and sometimes everything goes to hell and we get straight back into the car and call it a day.

But then sometimes we’ll be in the park, and the baby will cry, and I’ll start to go for her pacifier but realize that Indy already got it for her. And then he’ll ask me if I’d like a bite of his tomato. Goldie will fall asleep right there on the blanket, and I’ll lay back and close my eyes for a minute in the sun, and nothing will fall apart.