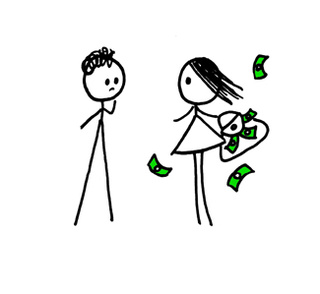 The general rule seems to be: Do Not Talk About Money With Friends.

Now, I’m not actually on board with this rule personally – I think it’s fine (even healthy) to talk about money with close friends, so long as all involved approach the conversation with sensitivity – but in many relationships, a No-Fly Zone when it comes to talking about money is often more comfortable. But sometimes – such as when your finances become tied up with those of a friend’s, whether because you live with them or because you work with them – a little money talk is impossible to avoid.

A reader recently sent me an email asking how to deal with a tricky financial situation involving her friend – who is also her roommate – and a miscommunication about who owed what to whom and when:

I’m in a bit of a prickly situation. My summer roommate ended up arriving at our sublet later than we’d anticipated (I arrived on the expected move-in date), and seems to expect me to swallow the first month’s rent save for the few days when she’ll actually be living in the apartment. I was wondering if you have any advice on dealing with this?*

A. Oh man, I hate this kind of thing, and I really feel for you.

I lived with a very close friend for awhile, and it was awful whenever a money issue arose, because tension with a roommate is bad…but tension with your best friend is worse. The worst fight we ever had was over money, actually: her boyfriend was staying with us every night, and I felt that he needed to be contributing to the rent if he was going to be essentially living in our home. In retrospect, the real issue was probably (definitely) less about the money than it was about me: I was jealous that he was taking up all her time, lonely, panicky about pretty much everything in my life, and annoyed that there was a boy sitting in my living room in his underwear. But regardless of who was right, the fact was that I handled it extremely poorly, by basically saying nothing but silently broadcasting my resentment until things got so awkward between us that we had a total blow-up. Not good. So don’t do that.

Here’s the thing: when it comes to any issue involving money, people tend to get so heated so quickly that your ability to keep a level head and be calm and direct will speak volumes about the attitude with which you’re approaching this (and your reasonableness and flexibility will, hopefully, rub off on your friend). If you’re living with her for awhile, it’s vital that you learn how to disagree in a calm way, so think of this as a learning experience.

– Talk in person (no texting or emailing! Way too easy to misinterpret emotion), and preferably in a neutral environment.

– Remember that this is not a personal issue: anything having to do with money should be handled in a calm, professional manner (just like you’d handle things at work).

– Make the issue bigger than it is, or bring up past arguments (even if they seem relevant) – keep the focus on the matter at hand.

– Allow the conversation to escalate (no yelling). Pretend you’re at work and dealing with a difficult coworker.

Try something like this: “I want to be honest with you about my situation: I was under the impression that we would be sharing the cost for the first month regardless of when each of us moved in. I understand that there was a miscommunication here, but unfortunately it’s put me in a tough spot, so I’m hoping we can find some way to compromise that’s comfortable for both of us.” Clear, calm, and open to discussion.

You have to assume a little bit of responsibility, since it seems that the terms of the rooming situation weren’t entirely clear, so if she doesn’t want to cut you a check (and she likely won’t, since the month is already over), try presenting a few options that would be acceptable to you (for example, perhaps she could take care of two months’ worth of utilities). The goal is for both of you to leave the conversation feeling that you’ve been treated fairly, with your friendship (and finances) intact.

And if she really resists and won’t find any way to compromise…well, lesson learned. You’re out some money, which is certainly unfortunate, but I’d say put it behind you, try to enjoy the rest of the summer, and maybe rethink living with her in the long-term (or at the very least be sure to lay out crystal-clear terms prior to any move-in dates in the future).

*Email has been abbreviated to remove identifying details. Question printed with reader permission.