THE BURGERS (yeah, they deserve caps) 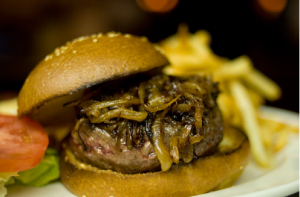 You know if someone’s eaten the Black Label burger at Minetta Tavern, because they just won’t stop talking about it. Like, ever.

When Verena and I got on the subject of burgers a couple of weeks ago, we decided that it just had to happen: we’d journey down to Minetta to taste-test the $26 Black Label Burger and the $16 Minetta Burger (which Frank Bruni has actually decreed better than its pricier rival) side-by-side.

The Black Label burger is one of the more storied foodie items in the city. Seriouseats has an extraordinarily comprehensive run-down of how the thing (which I would hesitate to call a burger, so far is it from tasting like what one would expect from a meat patty swaddled in bun) is made, but suffice it to say that it’s an elaborate process, including dry-aged ribeye, brisket, and skirt steak in secret proportions, brioche from Balthazar Bakery, and onions that are griddled just-so in the beef juices. 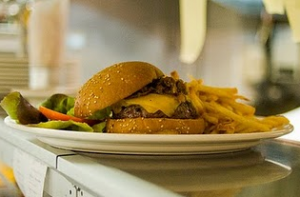 The Minetta Burger, a blend of brisket and short rib, is more along the lines of what you’d expect – which isn’t to say that it’s anything short of spectacular. It comes with cheddar cheese (the Black Label does not, and you’re not encouraged to mess with success), and is less…well, oppressive. OK, honest? I thought the Minetta Burger was worlds better than the Black Label burger. The Black Label burger is super-rich, intense…funky. To me, it was more of an experience than a great meal. Fortunately, Verena vehemently disagreed, and she happily took the remainder of my half of the Black Label off my hands so I could concentrate on the good stuff (which included the pickle – total perfection).

The expertly mixed Ketel One dirty martinis, by the way, deserve special mention: they might just be the best I’ve ever had. I wanted to give the bartender a kiss.

Note: images via seriouseats & beefaficionado ; as I learned on my first trip to Minetta, photos are discouraged…and this time I wanted to obey the rules 🙂