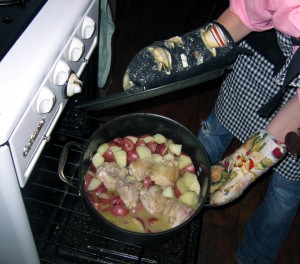 Last night, I made Chicken Vesuvio based on a Giada recipe sent in by reader Molly. It was so delicious that I am still eating it this morning (really). I’ve never made chicken thighs before – mostly because I don’t find them very aesthetically appealing – but wow, are they more flavorful than breasts. Kendrick says that the dish is his new favorite, but he says that almost every time I cook. In other news, my husband is wonderful.

Anyway. It’s much better-tasting than it is pretty, so just trust me on that, and let’s get started!

– 2 packages of chicken thighs with skin and bones intact (I bought the top-quality free-range organic stuff, because thighs are very inexpensive)

– Salt, pepper, & garlic salt (I used my brand-new AllStar Organics garlic salt, and it was delicious)

2. Season chicken well with salt & pepper. In a large, heavy-bottomed pot (one with a lid that can go in the oven), heat the oil, and then brown the chicken thighs on all sides, about 10 minutes.

3. Remove chicken to a bowl. Add potatoes to pot and season with salt, pepper, and garlic salt. Cook until golden brown (about 10 minutes).

4. Add crushed garlic and saute 1 minute, then add wine, scraping up any brown bits that have stuck to the bottom.

5. Add summer savory and chicken broth, return chicken to pot, and stir to combine. Bring liquid to a boil.

6. Cover the pot and place it in the oven for about 20 minutes, or until chicken is cooked through.

7. Return pot to stovetop and remove chicken and potatoes, arranging them on a platter.

8. Add the artichoke hearts to the sauce remaining in the pot, cover, and simmer for about four minutes, stirring frequently. Lower heat and stir in the butter. Pour sauce over chicken and potatoes, and serve. 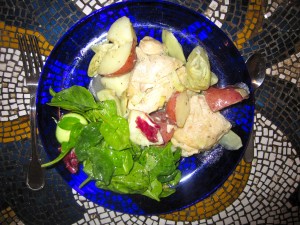 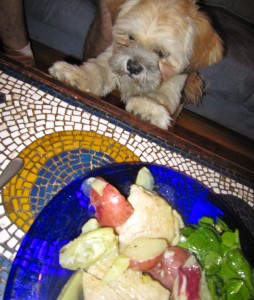 (I served the chicken alongside a simple tomato, cucumber & baby spinach salad dressed with Alpine Avocado Vinaigrette. Virgil was envious.)

Now. Since I always – always – mess up at least one step when making my way through any recipe, I thought I’d add a new element: What I Did Wrong and How I Fixed It.

What I Did Wrong and How I Fixed It:

1. Kendrick lit the stove, which is such a flustering, death-defying achievement that I totally forgot to tell him to jack the heat up to 450. I discovered that the oven was set to 250 only after I took the chicken out of the oven at the designated time and found it…less-than-edible. This turned out to be not a very big problem at all; I simply turned the stove up to 450 and cooked the chicken for an additional 10 minutes, and it was delicious.

2. I didn’t heat the pot enough before adding the chicken or the potatoes, so neither turned the lovely golden-brown color I was anticipating. The dish ended up not being as pretty as I would have liked, but like I said: delicious anyway.