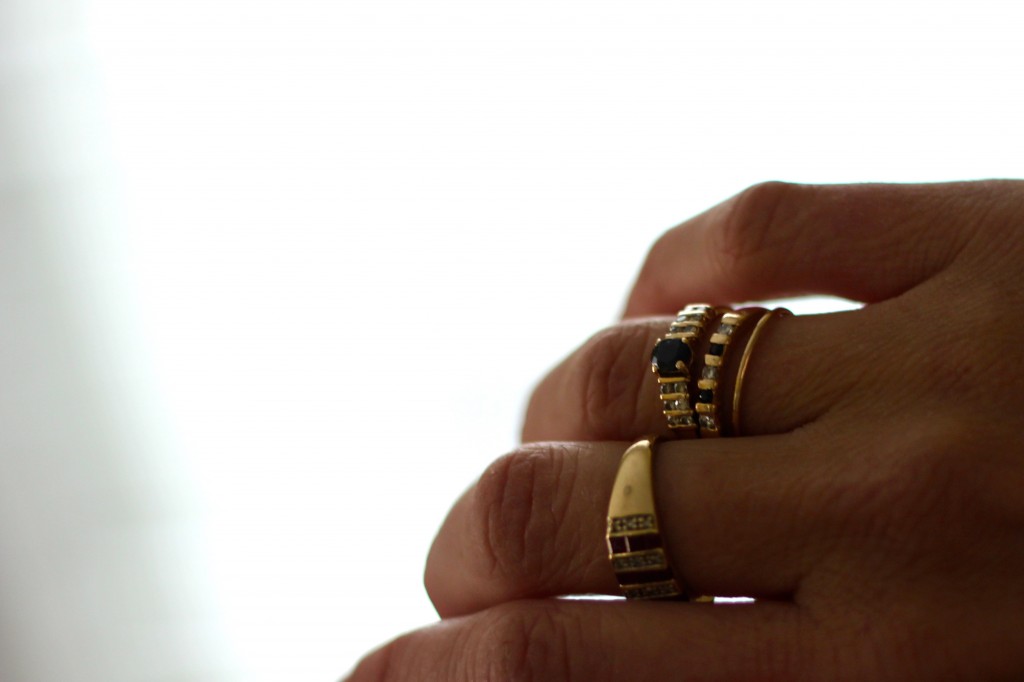 Even something as simple as, say, the Apple TV remote (which has a tendency to go wandering in our household; ours was missing for over a week and just turned up this morning lodged so far down in the couch cushions that multiple instruments had to be deployed to release it)…when I can’t find something, it’s all I can think about. It’s just such a powerless feeling, when you look for a watch or a wallet or a phone or an earring everywhere it could possibly be and still can’t turn it up.

But over the years I’ve lost a bunch of things that have meant a great deal to me, and while it’s never fun to have very personal items go missing…what it’s taught me is that it’s all just stuff. It’s a cliche, but I mean it: it’s stuff. And stuff is nice, but when it comes down to it what matters are the people who gave you those things that you have, not the things themselves.

A few months ago, I had just wrapped a shoot in my house and said goodbye to the production team when I looked down and saw that two of my rings – the two that I always wore stacked on my right-hand ring finger – had gone missing. Just slipped off my finger. And while every single ring that I wear is very important to me (something about rings – as opposed to, say, earrings or bracelets – makes me feel like each one should matter)…these were maybe the most important of all, after my own engagement ring: they were my mother’s original engagement and wedding rings, which she gave to me right around the time I moved to Los Angeles.

I spent most of the rest of the day crawling around the house on my hands and knees, looking in every radiator grate and behind every bookcase, and turned up nothing at all except for a whole lot of dust bunnies. I cried a little to Kendrick, and then cried a little to my mom, and both of them assured me that the rings would turn up; of course they would. But they wouldn’t – I really had looked absolutely everywhere.

And so I decided to get over it.

It’s just stuff. My mom is what matters, not her rings.

Every once in awhile I thought of those rings, and I missed them, but I really do believe that no possession is worth being sad over beyond a reasonable “man, I wish I hadn’t lost that” period of mourning.

And there was my mom’s wedding ring.

I moved aside one last little sock…and there was the engagement ring.

I guess it’s just nice to have a reminder, once in awhile, that really, really nice little surprises can come along when you least expect them.