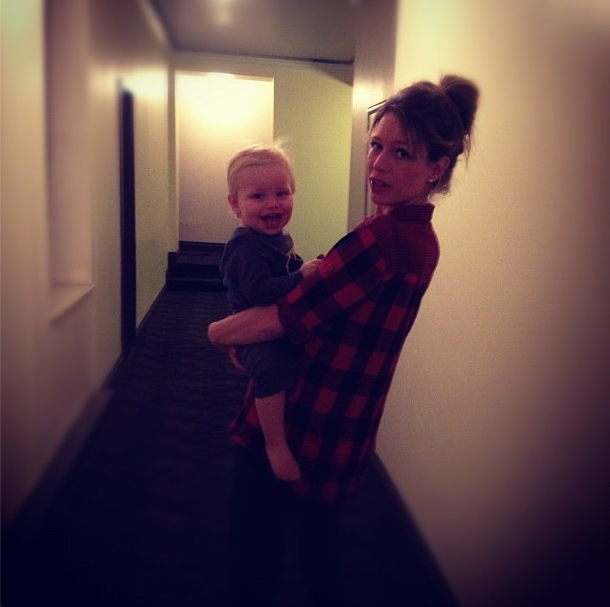 Headed out for an afternoon in Hell’s Kitchen in @_hatattack hat, @uggaustralia jacket & boots

So we’re camped out in the city for awhile – at least until we get power back on our street, which could be some time (Monday at the earliest, I’d guess).

We’re lucky to have staying at my parents’ place as an option, of course, and we get to spend time with my mom, which is nice…but still, being unexpectedly uprooted is a challenge. We’ve gotten into a pretty decent routine at home, and spending a few days crashing elsewhere is throwing it out of whack. Mostly the sleep schedule: Indy has slept through the night since the very first day he got into his new room (amazing amazing amazing), and…well, here, he’s not. I mean, it makes sense: at home he doesn’t have to deal with various pets and adults crashing past his crib at all hours of the night…but you know what I’m starting to suspect? That he’s still waking up from time to time even at home; we’re just not hearing him, so he gets bored and goes right back to sleep.

Where did this suspicion come from?

Last night, he woke up like it was Christmas morning – we’re talking laughing, smiling, and a confusing amount of energy – at 3AM. And because I was right there next to him, it was, you know: “Hey, Mom! Shall we get moving on the day? Let me whack you in the face a few times to help you along.”

But last night we also got to hand out candy to kids in the apartment building I grew up in, which was cool, so there’s that.