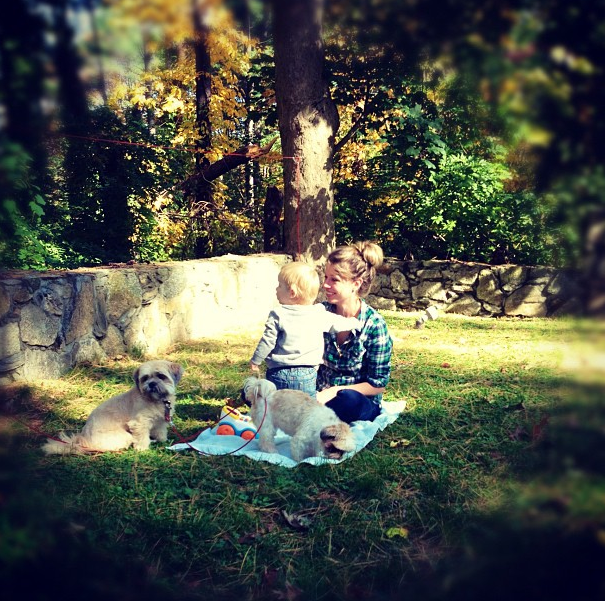 It was a big weekend around these parts.

A few months after Indy was born, I wrote about my struggles with post-partum depression and needing to reach out for help, and I explained that I hadn’t written about it earlier because sometimes I need to circle around majorly emotional issues for awhile before arriving at any semblance of clarity. Before I sit down to write, I like to feel like I’ve arrived at some kind of rational-ish evaluation of whatever’s going on. Also, even though RG is, in part, a sort of open-book diary, I’m still sometimes reluctant to talk about my feelings about big moments for my son…because it’s not about me. Or my feelings.

And this weekend was all about him, from top to bottom.

It was wonderful. Every single part. But – and here’s where I stop understanding exactly what was going on – the weekend also left me feeling a little…heartbroken. It’s mostly that I desperately want time to stop entirely and let me be with my child at this exact moment, just as he is, forever and ever.

He’s the best, and I want so badly to give him the kind of childhood – life – that he deserves. And something about his first birthday – the first celebration that was all about him, all for him, and that ushered him into the world of being an actual child who plays and feels and remembers as opposed to an infant with blind wants and needs who really just requires the basics to feel loved and supported – sent me reeling.

Sometimes I don’t know what to do with all this love, and I wish it was as simple as wrapping it up in a box and giving it to him to hold on to forever.

Moving on to happier topics. This was how the birthday weekend (you get a weekend when you’re one) started: with a leisurely decorating session (we went for a very loose Yo Gabba Gabba/rainbow theme) with occasional breaks for backyard picnics. 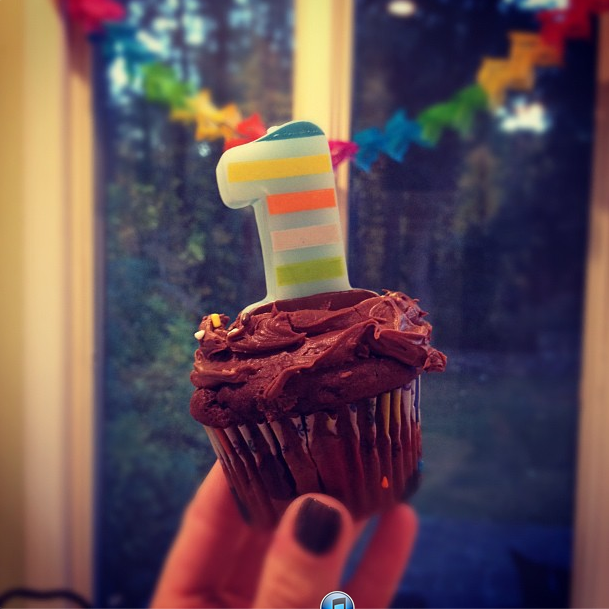 (My mom provided the cupcakes.)

And as first birthdays go, it felt like a really good one.

One byproduct of the anxiety I mentioned above, apparently, has been an overwhelming need to Google first birthday ideas in order to figure out how to make the celebration perfect/special/amazing…but then, once it was actually underway, I discovered that almost none of the “tips” seemed to really apply to us, or make sense within the context of our family and friends.

For example, one tip I read over and over was to keep the party to an hour and a half max so as not to overwhelm the guest of honor…but we had kept the guest list very small and the whole thing very informal, and so it felt weird not to just kind of wing it and have people hanging out well into the evening, doing whatever they wanted.

Our friends took over the barbecue, dogs ran wild, champagne was spilled, cake was smashed, and our son was so happy. (He stayed up until nine like a total party animal.) 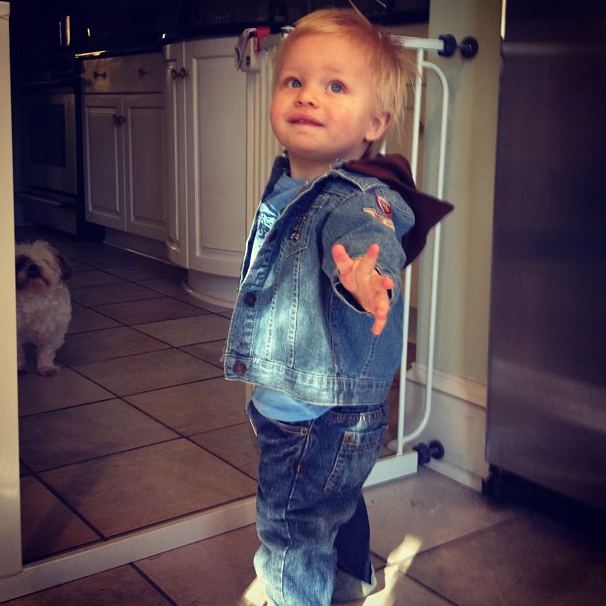 Sunday morning – Indy’s actual birthday – we had brunch with Kendrick’s parents (who are visiting from Ohio), and I thought that the Canadian tuxedo was a pretty obvious choice for the big day. (That jacket-and-hoodie contraption used to belong to our neighbors’ kids; I completely love it.) 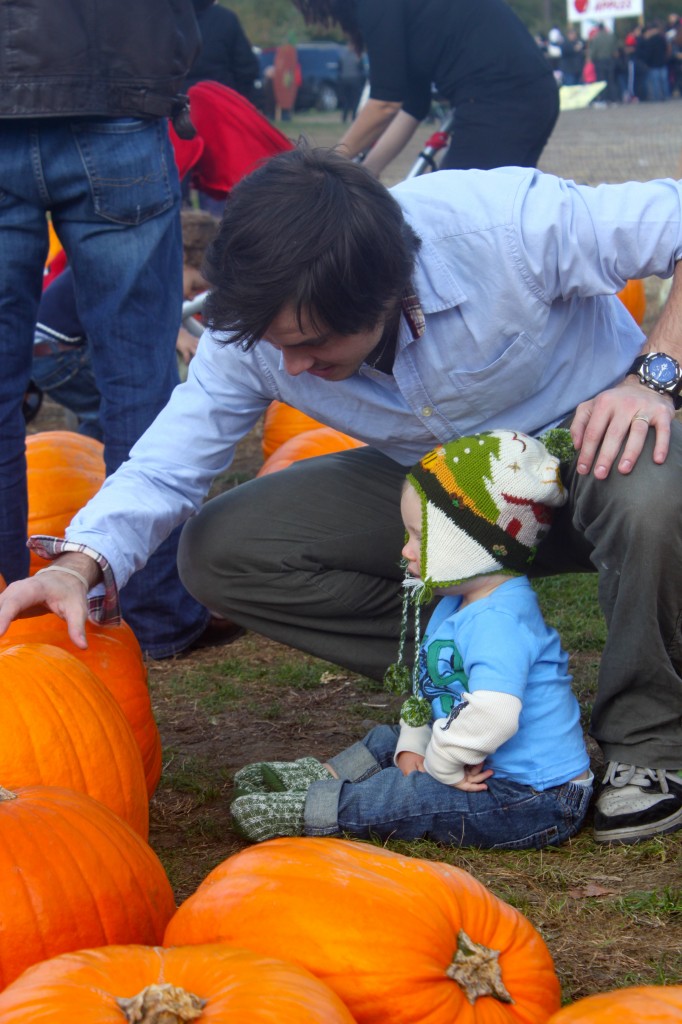 Next stop: a pumpkin patch/pony ride/bouncy castle/petting zoo place in North Salem with our friends Katie and Russ and their kids.

I hate carving pumpkins, and I already put in my time this year, so we did more patch-exploring than pumpkin-purchasing. 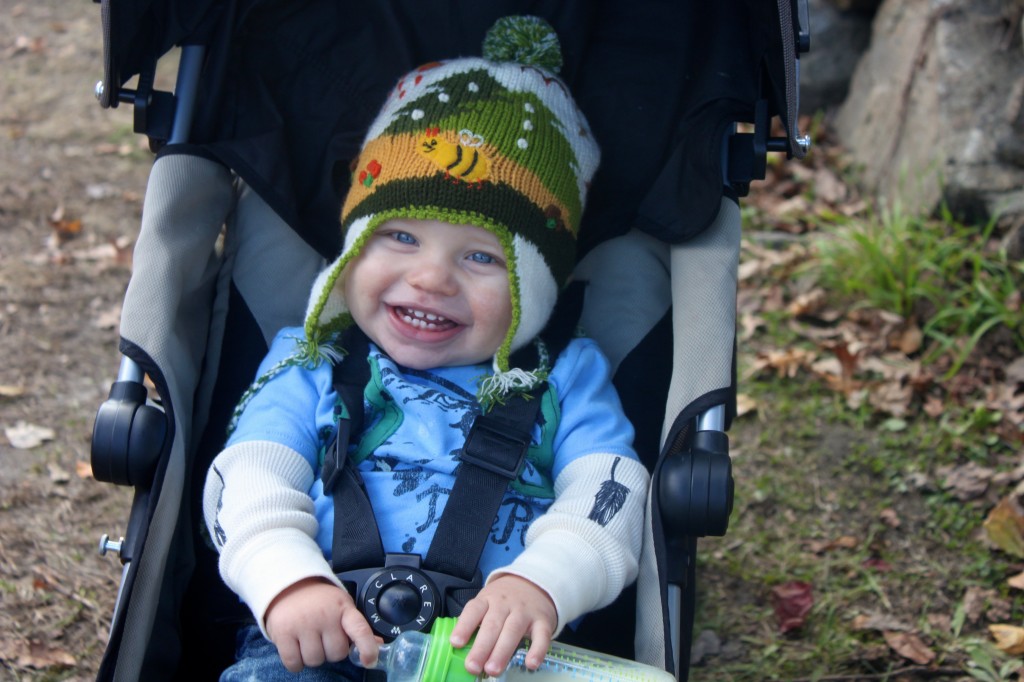 But oof, it was exciting nonetheless. 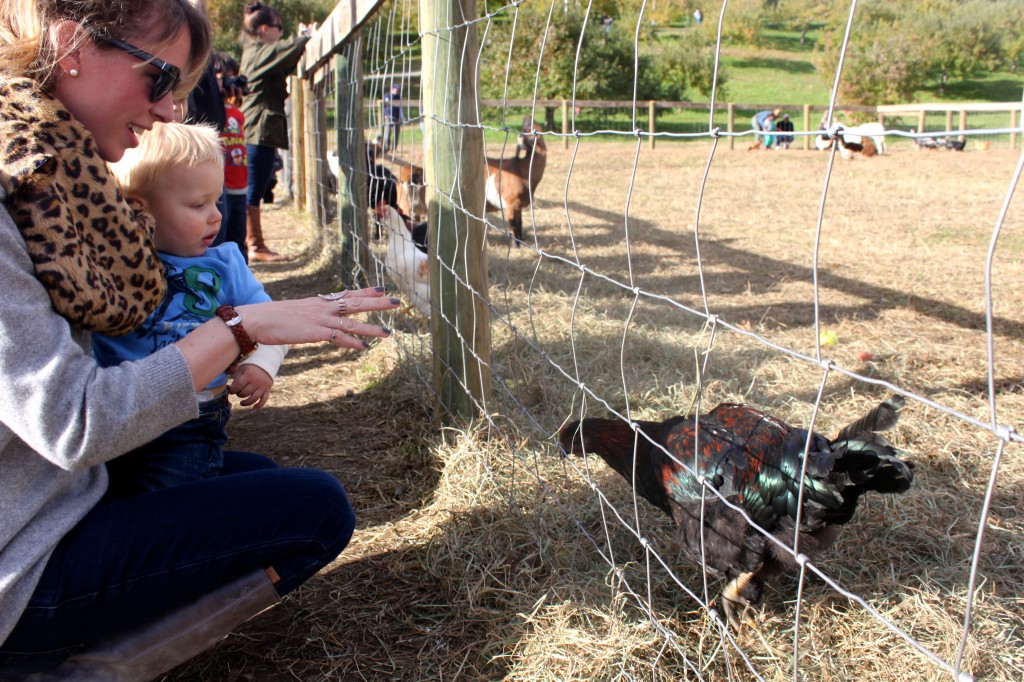 The petting zoo was totally our favorite part. 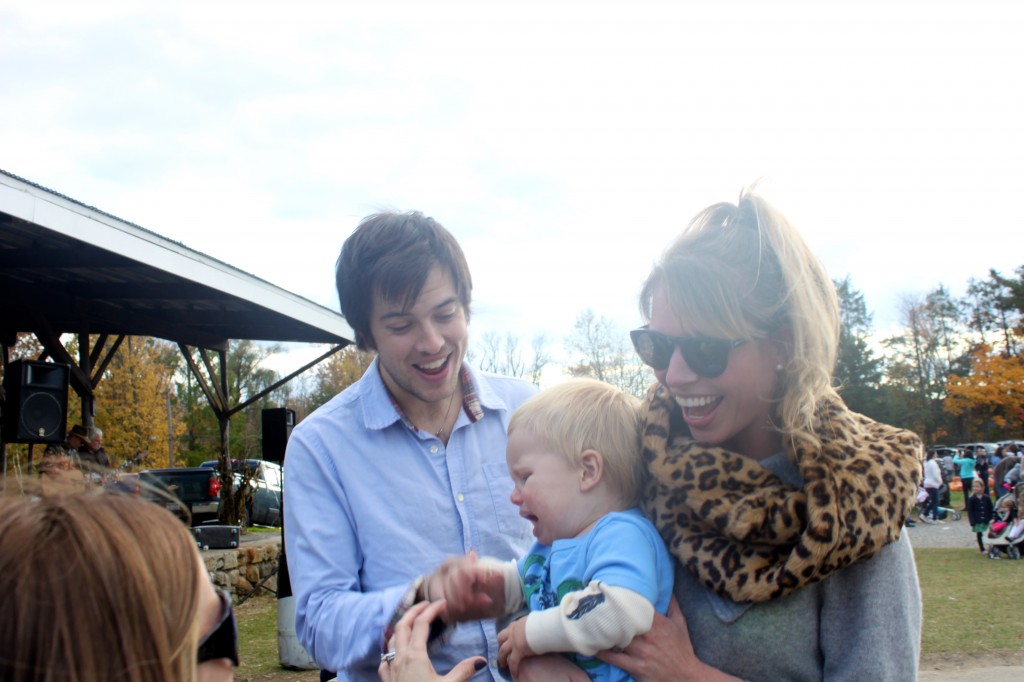 And then, around the time when the apple cider donuts got broken out, all the birthday excitement got to be a little much, and we had a tiny meltdown and headed home for some snuggling and our very favorite TV show.

Hey: it’s his party, and he’ll cry if he wants to.