We’re Not In Malibu Anymore 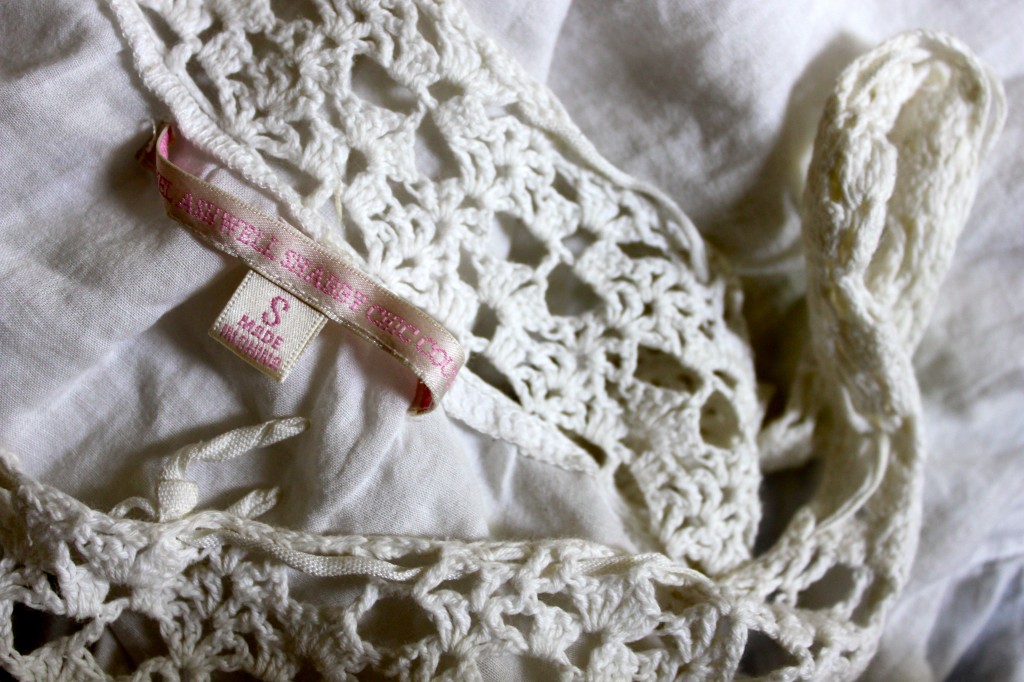 The summer after graduation, shortly after I moved to Los Angeles, I found myself living in Malibu in an Oscar-winner’s house. My boyfriend Rob’s best friend had gotten engaged to Mira Sorvino, and they were getting married that summer, in Italy. We couldn’t afford to make the trip to the wedding, so we volunteered to spend a few weeks watching their house and dogs for them.

A terrible hardship, I know: the property was on a cliff overlooking the ocean, and every morning we drank our coffee sitting by the pool, watching dolphins and whales surfacing just off-shore.

In actuality, though, it wasn’t nearly as idyllic as it sounds: Mira’s dogs (all twenty of them) very obviously wanted to kill me, Rob and my’s relationship was unraveling more and more every week, and I spent most days pacing around the guest house while Rob worked in the upstairs office of the main house. If someone came to visit, they were there to see Rob; I was still new to L.A., and knew almost nobody.

Our cell phones didn’t work way out by the ocean, so one day we strung soda cans from window to window in case we wanted to chat without running back and forth between the houses.

We never used them.

But, you know, I was keeping respectably busy: I had auditions, a new puppy, Jack, to take care of, editing work, and acting class, and had just gotten my first big writing job (I’d managed to get assigned a feature article for a national magazine  – a story on long-distance relationships that graced the last-ever cover of YM Magazine, a job that I got by literally sweet-talking my way past reception until I reached the editor-in-chief, and then forcing her to listen to my pitch until she gave me the opportunity to send her a spec article; totally insane and kind of brave, in retrospect). But those things only took up so many hours in the day. There were still many, many left to fill.

So I drove. Back and forth, sometimes very far away, but more often just to the Malibu Country Mart and back. You’ve seen the place, if you read US Weekly: Denise Richards and Kate Beckinsale get their photographs taken there a whole bunch. It’s the kind of place where everyone looks so rich they almost don’t seem real: it’s all blonde moms and their babies, off-duty movie stars with their babies, and the most insane cars you’ve ever seen in your life filled with still more babies. I met Keanu Reeves there once, at the Coffee Bean and Tea Leaf. He was on his motorcycle, and he said he liked my car. It was extremely exciting.

Anyway. Whiling away hours at the Malibu Country Mart sounds pretty fun, I’m sure…except when you take into account the fact that I was wandering around in an area where $20 sandwiches and $150 tank tops were considered bargains. I found a yogurt stand I really liked, so lots of days I would sit at the edge of the playground, eating my yogurt and watching families play.

I don’t know how to explain how I felt in those days better than this: I could barely see straight through the crushing loneliness, through the fact that I couldn’t find a single thing in my future that I thought would make me happy…but still: I wasn’t blind to the fact that my circumstances that summer were special. More often than not I felt very, very sad – hopeless, even…but I was still standing on a windswept beach with lighthouses blinking way off in the dark water, and I still saw how beautiful and remarkable of an experience it was to get to live in a place like that, even for a short time.

I had this vision, that summer, of what the future might be like, if I wished very, very hard: I’d be a glamorous movie star married to a successful writer, and we’d live in a beautiful waterfront home with our sweet dog and sandy-footed children, and every night we’d cook steaks and asparagus on our barbecue, and then I’d wrap myself in layers of white gauze and pad barefoot to our big white bed before falling asleep to the sound of crashing waves. The only thing was, I couldn’t see any faces in that vision: it was all just sand and water and barking dogs and white cotton tangled up in clean sheets.

Because even though if you squinted your eyes very hard my life at that moment didn’t look all that different from the one I imagined for myself, what I really was was an unhappy girl with an angry boyfriend and a dog who didn’t really even belong to me, living in an uncomfortable place where everything was damp and nothing was ours, and no desire to cook anything at all, because I couldn’t see the point when I knew that it wouldn’t make either of us happy.

So I drove: back and forth, up and down along the coast. And sometimes I stopped for yogurt and window-shopping.

One of my favorite places to window-shop at the Malibu Country Mart was the Rachel Ashwell Shabby Chic Store, and one day, wandering through the aisles, I broke and bought something, just because I wanted it so, so badly.

This was what I bought: a white cotton nightgown with a cream crochet neckline. It was ridiculously expensive, but I figured it could be a “souvenir” of sorts. I still own it, and for years it’s been my favorite thing to wear to bed. I can’t help it: wearing floaty white nightgowns still makes me feel glamorous and romantic, and every time I slip it on I remember the quiet of the beach at night.

But now years have gone by, and that nightgown has holes in the neckline. Malibu is a memory, Shabby Chic went out of business, and things are different these days. Realer; louder; brighter in nearly every way. And so it’s time for a replacement, I think.

Every time I pass through the sleepwear section of a store, I keep one eye out for a nightgown like that one I bought in Malibu so many years ago, but something about white, floaty cotton makes designers think that they should be charging upwards of two hundred bucks for the things. 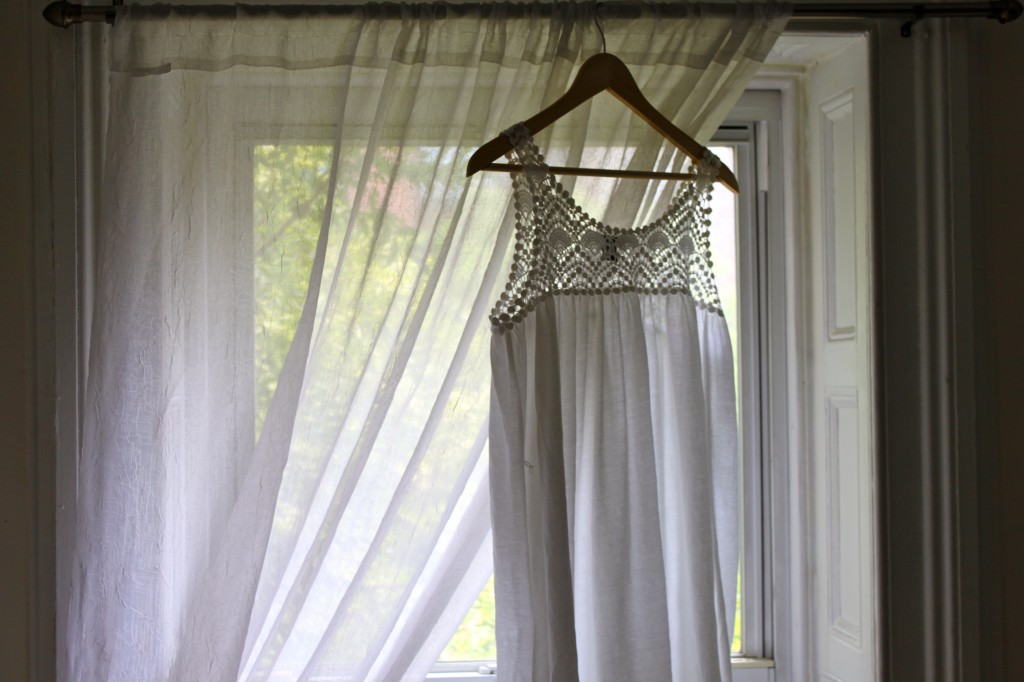 And then last weekend I was wandering through H&M with my husband and son, and I found it: the nightgown I’ve been looking for all these years. Except it was a dress, with a big rope belt around the middle.

But big rope belts are made to be pulled off and wrapped around other outfits, and so I bought it. 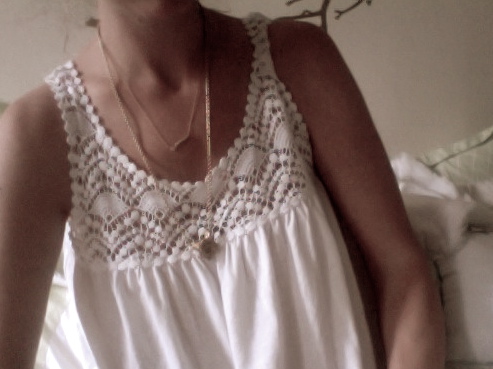 Actually, I bought three. What can I say: it was eighteen dollars, and I’ve been searching for it for so many years now. And now it’s for a life that I’m actually living – not one that I’m dreaming of while watching the waves pull back into the sea.