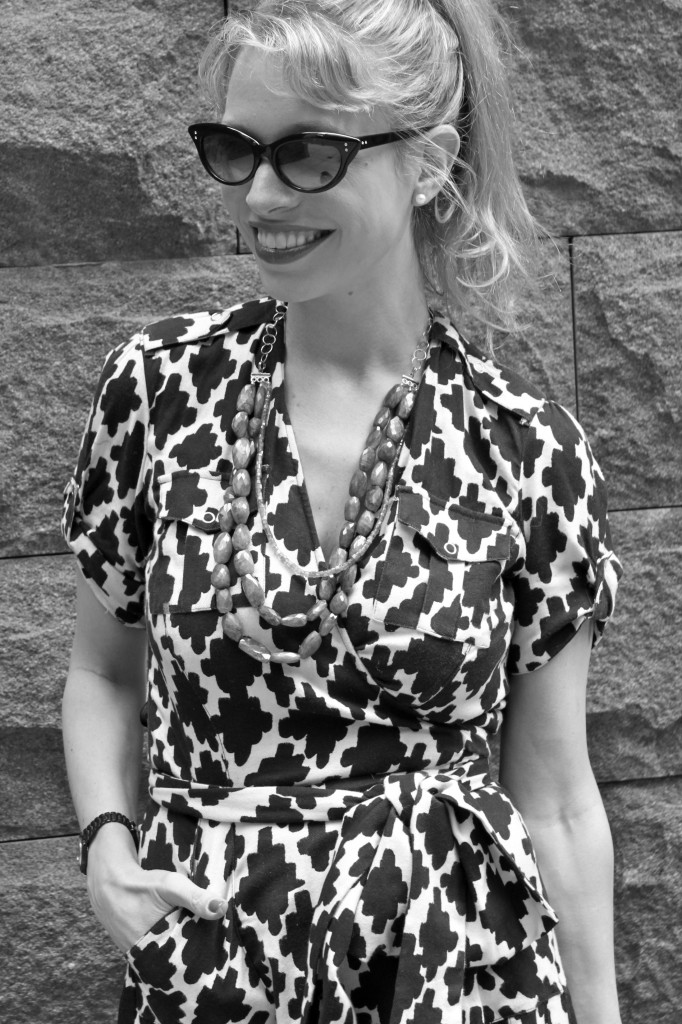 So I left the apartment on Wednesday morning feeling Pretty. Freaking. Chic.

Red lips, all done up with my favorite tips? Yup.

Oh, humidity. Oh, how you undo me.

You see, I had forgotten the cardinal rule when it comes to hairstyling…and on the very day when I advised a reader not to do the same. The rule: do not get into fights with the weather, because you will not win. On days when just stepping out the door turns your clothing soggy, the only way to roll is by embracing – and then working with – all your lovely natural texture. Choose the right products, and then go to town with what you’ve got. Braid it, twist it, turn it, work it…but don’t wrestle with it.

And so what I ended up with was half-wavy, half-straight, and all kinds of messy. (I put it in a topknot after taking these shots.)

But you know…that weird little twisty thing my bangs are doing looks…sorrrrta ’50s…ish? 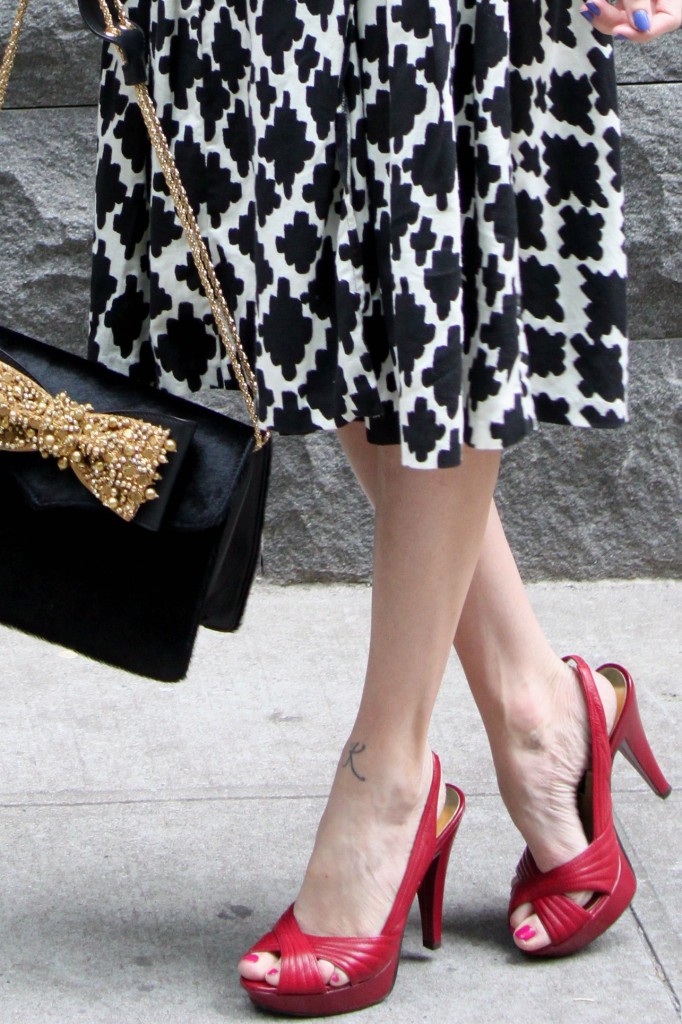 Isn’t that dress pretty great? I’ve had it for ages, and actually have a sort of funny/sort of sad story about it.

I bought it years ago, to cheer myself up during a time when lots of things were going wrong in my life: my relationship was in tatters, my career wasn’t exactly blowing anyone out of the water, and I felt generally lonely and desolate. I definitely couldn’t afford it – it’s DVF, so it had to be in the $400 range, even back then – but it just made me feel so…I don’t know, capable. Like a dress that a woman who could deal with things would wear. It made me feel like the kind of woman I wanted to be, and at that time I was willing to grab onto anything that might make me feel that way, even if that thing was only a dress. 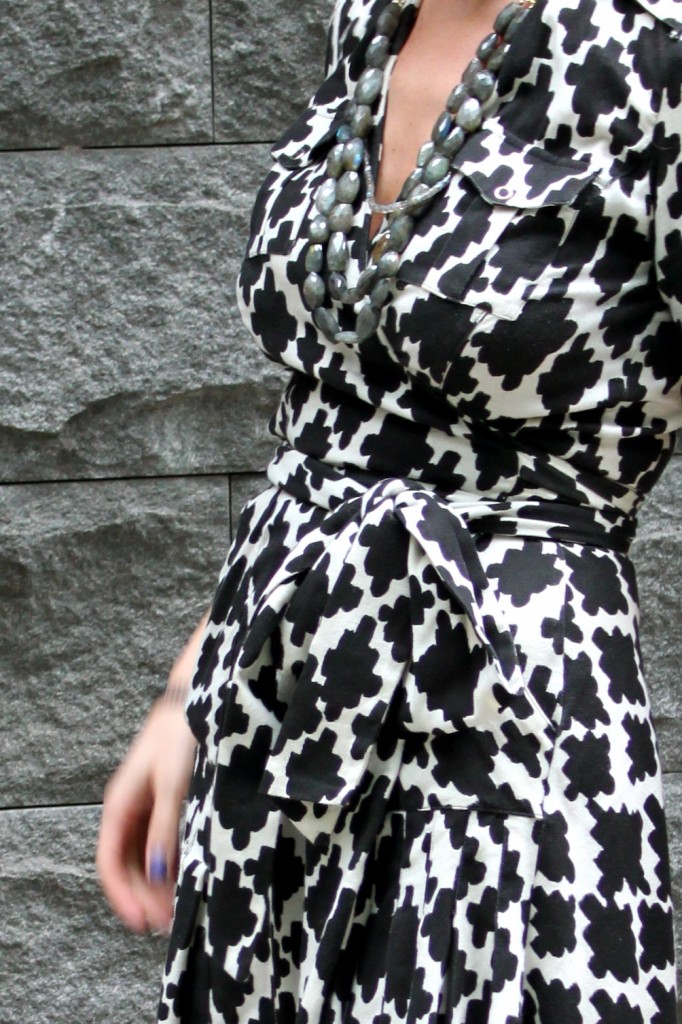 And so I brought it home. And then just a couple of days later – before I’d even gotten the chance to wear it – an acquaintance sent me a link to some red carpet photos of a movie premiere taking place about ten minutes away from my house featuring my live-in boyfriend of nearly two years, whom I had thought was out of town, and the woman who, as it turned out, he was also in a relationship with.

So that was a nice surprise.

SHE WAS WEARING MY DRESS.

No joke. The exact same one. And the worst part?

She looked so much better in it than me.

More than that: she looked poised, elegant, pulled-together, successful, and more or less exactly like the woman I had hoped to look like when I bought it. Let’s not forget that she was also at the premiere of a movie that she had acted in with my boyfriend…so she also happened to actually sort of be that woman.

So I spent many months picking up the pieces of where I had thought my life had been headed, and figuring out which direction to turn in next, and most definitely not wearing that dress, because every time I looked at it I thought of my (now ex) boyfriend and his new girlfriend.

And really, I had nowhere to wear it to anyway. 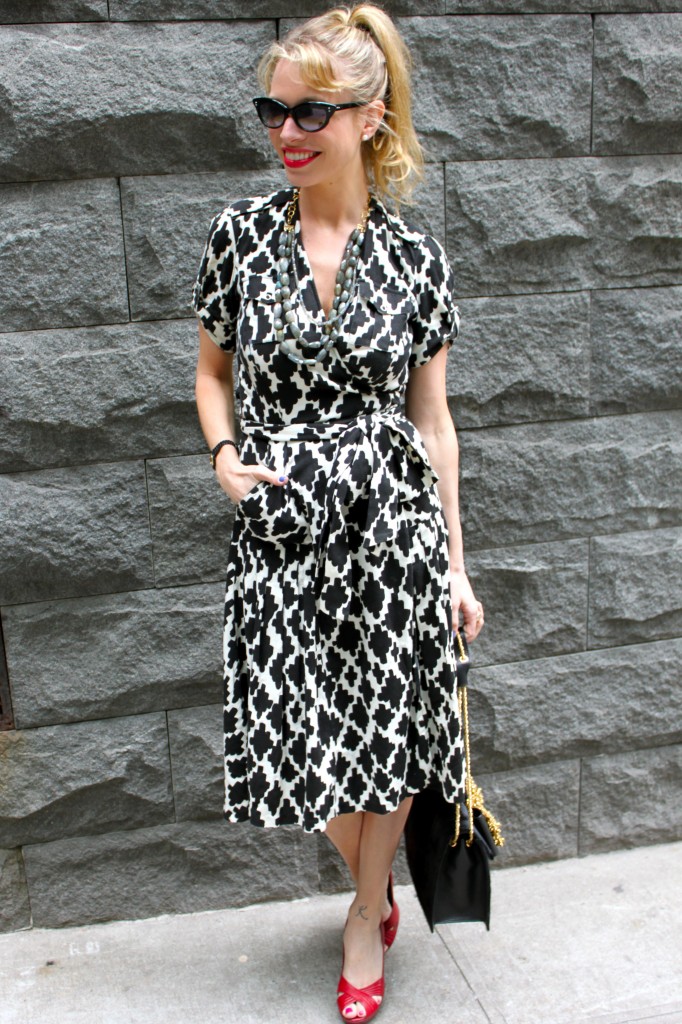 But something I’ve learned in the years that have passed since: You don’t need to have the perfect place to wear a dress to in order to put it on. And you don’t need look like the most perfect person who ever wore a thing to wear it. Your hair can be sorta weird because you spaced on reading the weather report before leaving the house that morning. You can forget to shave your legs, and be too pale, and have a wrinkle or two in your skirt, and maybe have chipped nailpolish and dry feet and circles under your eyes because you got up early just to drink your coffee all alone in the quiet.

And you can still feel Pretty. Freaking. Chic. Because being totally pulled-together? That’s for red carpets. It’s for show.

Clothing is for you. For real. And that dress was – is – for me. The real me. Frizz and all.