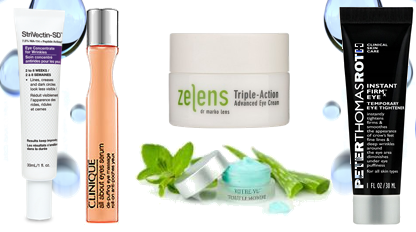 I don’t know what’s in the water lately (probably a bit of New Year’s Eve champagne, if I had to guess), but I’ve been getting request after request for recommendations for under-eye issues – primarily puffiness and dark circles. And I’m certainly the right person to commiserate with about these kinds of beauty troubles, because I have been through it with the eye drama.

Dark circles I don’t know a ton about (see below; would love your recommendations), but I’ve always had a problem with puffiness – and specifically one eye that gets way puffier than the other, creating a stunning lopsided effect. And then in the summer of 2010 I hurt my eye in an embarrassing dance floor mishap, an injury that ended up compounding the problem to the point where the appearance of my eye became something that I obsessed over. I even (sharing secrets, now) briefly contemplated looking into surgical help, because it was starting to affect my ability to function at work.

You know how when you have a pimple as a teenager and you think everyone’s looking at it, and your parents tell you to stop being silly because you’re the only one who even notices the thing? Well, I was hosting a project awhile back, and as the shoot rolled on I began to feel my troublesome eye growing puffier and puffier. I tried to apply that no-one-notices-but-me logic…until I realized that everyone was most certainly noticing. The producers had a whispered conference in the corner that was quite clearly about the golf ball popping up on my face, and shortly afterwards a cameraman instructed me to please direct the remainder of my lines to the food that I was preparing (in other words, keep those eyes far away from the camera).

So we’re not talking run-of-the-mill poof; we’re talking a sorta major problem for someone who does the kind of thing that I do for a living.

And I FIXED IT.

What I did: Get pregnant, and start drinking water like it was my job.

I swear, I’d tried everything from fancy creams to Preparation H to crazy expensive eyedrops (part of the problem was attributable to dry eye syndrome), and after all that, it was the constant water-drinking that helped more than anything else. Which is why even though I don’t really do the New Year’s Resolution thing, I made one this year, and it is to continue drinking water as if I have a baby on board.

Anyway, that’s my big, earth-shattering beauty secret. But of course creams do help as well, so I wanted to offer up some suggestions for those of you who want additional help beyond the H20.

And of course, I always take off every stitch of makeup before going to bed (another new development) and leave whatever cream I’m applying to my eyes in the drafty spot next to my air conditioner (or in the refrigerator during warmer months) to up the cooling effect.

The dark circles thing I can’t speak to, though: I just don’t really have them unless I’m very tired. When they pop up, I erase them with Yves St. Laurent Touche Eclat or Laura Mercier Secret Concealer, and my mom recommends Benefit’s Erase Paste…but I figured I’d post the question here in case those of you with more experience with this specific problem would be interested in offering up product recommendations.

So: If you suffer from dark under-eye circles…what do you find helps the most?