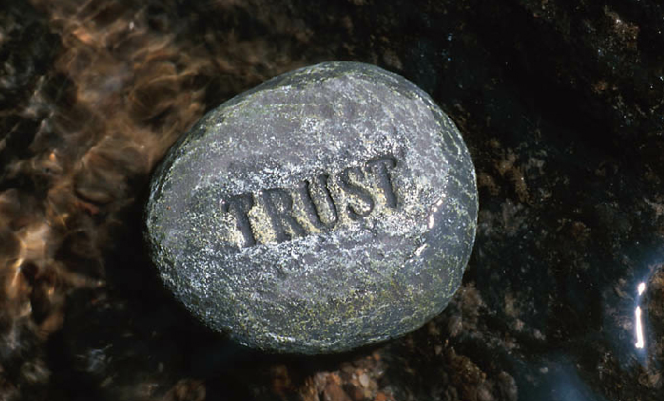 Today’s reader question – about relationship trust – is something that I have extremely strong feelings about. And the reasons for those strong feelings are deeply personal ones, but your feedback the other day encouraged me to try to open up a bit more here, and especially about issues like this one (which I think are relevant to so many, and worth talking about).

So thank you for that.

Have you ever experienced trust issues? I ask because my boyfriend, whom I’ve been with for a year, has allowed a single, attractive woman to move into his house.

They briefly lived together a few years ago, but at the time both were in relationships with others. They haven’t seen each other since, but she needed somewhere to stay for a week or two. Well, it turns out that she’s actually living with him while she finds a new place, which I only found out after the fact (he says he was nervous to tell me she was moving in because he thought it’d upset me).

She’s clearly here to stay: she’s begun including herself in our social life consistently, even on occasions when we would ordinarily be alone. How she interacts with him – her body language, her remarks – makes me very uncomfortable, but he says that she’s more of a sister to him than anything. Now she’s coming along on his annual July 4th camping trip with his friends…even if I don’t go. I have had serious trust issues with him in the past, and now I’m wondering if I should leave the relationship.*

This is an extremely sticky and complex situation, and I really, really feel for you. Have I ever experienced trust issues? Yes, and they impacted the first year of my relationship with my husband in a major way. My live-in, very serious ex-boyfriend of a year and a a half cheated on me with several women, and was actually in a committed relationship with someone else for the last three months of our relationship (he was on a job in another state, hence his ability to be so deceitful)…facts I only discovered after we broke up.

When I say that I had no idea he was cheating, I mean it never even occurred to me as a remote possibility, and I was so shocked by my naivete once I found out that I had trouble trusting my instincts when it came to the next relationship (which happened to be Kendrick). It wasn’t that I didn’t trust him…I didn’t trust people. Or myself. I felt that if I could have been so blind to major flaws in one relationship, I couldn’t trust myself to see things clearly in another. I didn’t believe that it was possible for a man touring around the country with a rock band to be faithful to me both because experience had shown me otherwise…and because I didn’t think that I was special enough to make a commitment to me valuable to him.

And the way that I finally came to understand that was that over time I began to recognize such consistency in his actions that there was no room left for questions: he didn’t pander to my fears, but rather talked me through them and helped me see the truth (or falsehoods) behind them. He consistently conveyed to me through his actions that I was his priority and that he took my concerns seriously, and he worked to show me that nothing meant more to him than our relationship. I’m sure it was frustrating for him at times, but he never made me feel that I wasn’t worth it.

So I do know where you’re coming from. And based on the information you gave me, here’s my honest opinion: you are not being unreasonable when you say that you feel uncomfortable. Your boyfriend absolutely should have been clear about the circumstances of his new living situation with you prior to the move-in rather than just springing it on you because he was “nervous” – the fact that he was nervous says that he at least suspected that this would be tough on you, and he should have addressed that fact rather than avoiding it. And his new roommate should be sensitive to the fact that both he and you deserve alone time as a couple.

This is not to say that he’s cheating – or that he will – and he may indeed just be trying to do the right thing. But it is an understandable situation to be on the fence about, and so far it doesn’t sound like anyone involved has taken any real actions (I’m not talking about words) to make you feel better.

I’d suggest sitting him down – without his new roommate – and calmly expressing to him that while you understand that he’s trying to help out a friend, you’re a little uncomfortable with the situation and sometimes feel like there’s a third party in your relationship. Express how much it would mean to you to spend more time alone with him, and offer to start helping out with his roommate’s apartment search. Once you’ve conveyed your feelings, he can start showing you through his actions where his priorities are, whether that means not inviting her along on activities that you’ve planned as a couple, or setting a firm move-out date. And if he can’t show you this, I think that signifies something larger than fears about this particular woman.

I’m not telling you to leave the relationship – not at all – but I am telling you to pay attention to what he does once he knows that something makes you legitimately uncomfortable. And once he’s shown you that you can trust him, do, and feel proud that you have a boyfriend who’s a good guy, and is there for friends when they need him.

Big hug – I’ll be thinking of you.