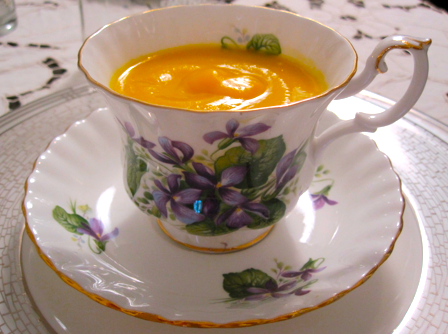 2 tsp fresh ginger, minced (I say 2 tbsp in the video, but my mother called me after viewing it and said that’s too much. I say it depends on how much you like ginger.)

1. Preheat oven to 375F. Place squash, cut side down, on an oiled baking sheet and cook for about an hour, or until a fork can easily be inserted.

2. Remove squash from heat and let cool for at least 45 minutes (don’t burn your fingers!).

3. Using a paring knife, remove skin from squash and cut into 2” chunks. Set aside.

4. In a large pot, heat 2 tbsp olive oil and add the onion, garlic, ginger, brown sugar, and cinnamon stick. Cover and cook over med-low heat, stirring occasionally, for about 10 minutes (or until onions are translucent).

5. Add squash and chicken broth to pot, cover, bring to a boil, and simmer for about ten minutes.

7. Working in batches, puree the squash/onion/broth mixture in a blender (when a vortex appears at the top, you know that it’s blended sufficiently).

8. Top with a little creme fraiche or a touch of chopped parsley, if desired.

Serving tip: Serve butternut squash soup in vintage china cups so that your guests can enjoy their first course while still mingling and socializing.