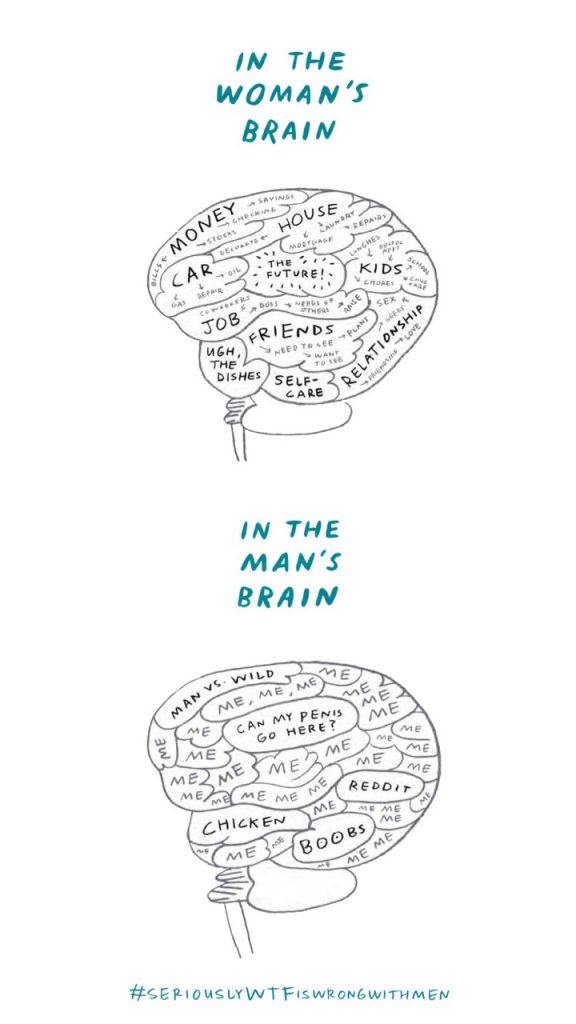 Ohhhhkay, so today? Was one big reminder why I am so super glad I am not a teenage girl anymore. Because teenage boys are the fucking worst. And they’re so adorably charming-when-they-want-to-be that you forget! But then you remember. Because they do something that’s the fucking worst, and they could have really just HAD A LITTLE FORESIGHT or DISPLAYED A MODICUM OF RESPONSIBILITY, but NOPE.

I have this couch. Or rather my landlord has this couch, and when I moved in he asked if he could leave it in the family room because it was apparently a twelve thousand dollar couch when it was new (!!) and one day he might want to recover it. And I said sure, fine, because a) it wasn’t terrible, and b) I’m not in the business of buying anything that I don’t absolutely need to buy these days. I had it steam-cleaned when I moved in, and I tried to be okay with it, I swear…but what it came down to was that perhaps it was worth 12 thousand dollars in, oh, I dunno, 1981, but it is now the same age as me and neither of us are quite as sprightly as we were back in the day.

I am a weirdo about surfaces that absorb things like skin cells and various fluids. When I travel, I take my own blanket, pillow, and slippers with me, because touching things like hotel sheets and carpets is not, to my mind, an option. So when I found myself watching TV while literally perching on the one teeny-tiny corner of this frankly enormous couch that I had scrubbed within an inch of its life because I couldn’t bring myself to sit anywhere else on its dusty, shlubby surface, I thought: No. I am a nearly 40-year-old woman, and I deserve to watch Unsolved Mysteries on a piece of furniture that doesn’t make me want to cry. So I told my landlord that, speaking as a friend, the couch might have deserved the very expensive recovering treatment back in its youth, but that it has now officially Had The Biscuit, and must be released from its tenure. I’m a certified Decor Expert, you know – a couple of YouTube TV shows have said so; it must be true! – and eventually I wore him down.

I posted the couch in the Free Stuff section on CraigsList, and was quickly inundated with a sum total of three interested parties, two of whom never returned my text. The third option, however, turned out to be a 19-year-old dude and his five 19-year-old dude friends, who showed up at my house with their pickup truck and told me that they were super! pumped! about the couch, and also about the various other items (a couple of old chairs, a rug, some dumbbells) that I offered them if they’d just cart them out of my house.

They took off their shirts (true story; masks on, though!). They lofted my twenty bazillion pound couch out of the family room and into the street. They secured it in their pickup truck.

Then, my friends, they changed their adorable little minds.

It “just wasn’t what they’d expected,” they said. They “hadn’t realized it was so big,” they said.

Why, exactly, a couch that they had a) seen in photos, b) been provided exact measurements for, and c) been hanging out with during the FULL HOUR it took to move the thing out came as such a surprise to them is a mystery for the ages.

Be that as it may, the next thing that happened was that they apologized, deposited the couch on the street in front of my house, and left. It took the property manager for my park all of thirty minutes to show up on my doorstep to alert me that a couch in the street was – as I might have surmised – not exactly in keeping with the HOA specifications. 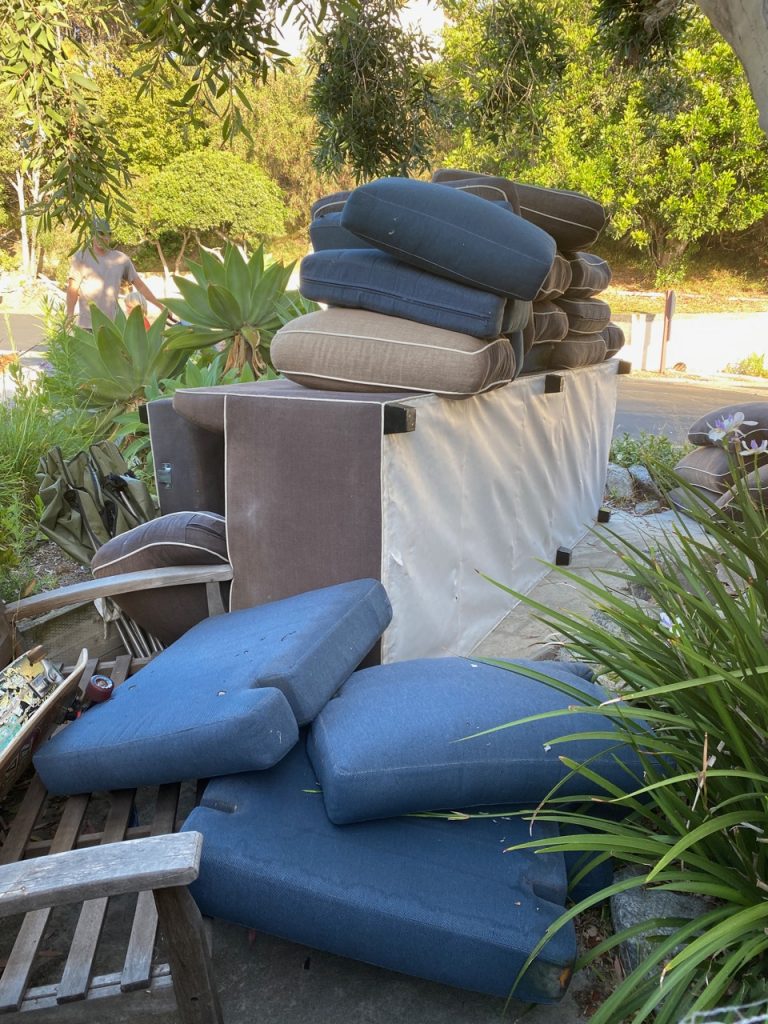 And so now? Now I have a sectional couch decorating my front yard.

TL;DR: Teenage boys are the worst.

P.S. They screamed when they saw a spider and I had to kill it, which kind of made me feel better.

P.P.S. On the plus (?) side, moving the couch led me to a new discovery about my house, which is that there is a MASSIVE FUCKING HOLE IN THE WALL THAT HAD BEEN OBSCURED BY SAID COUCH. 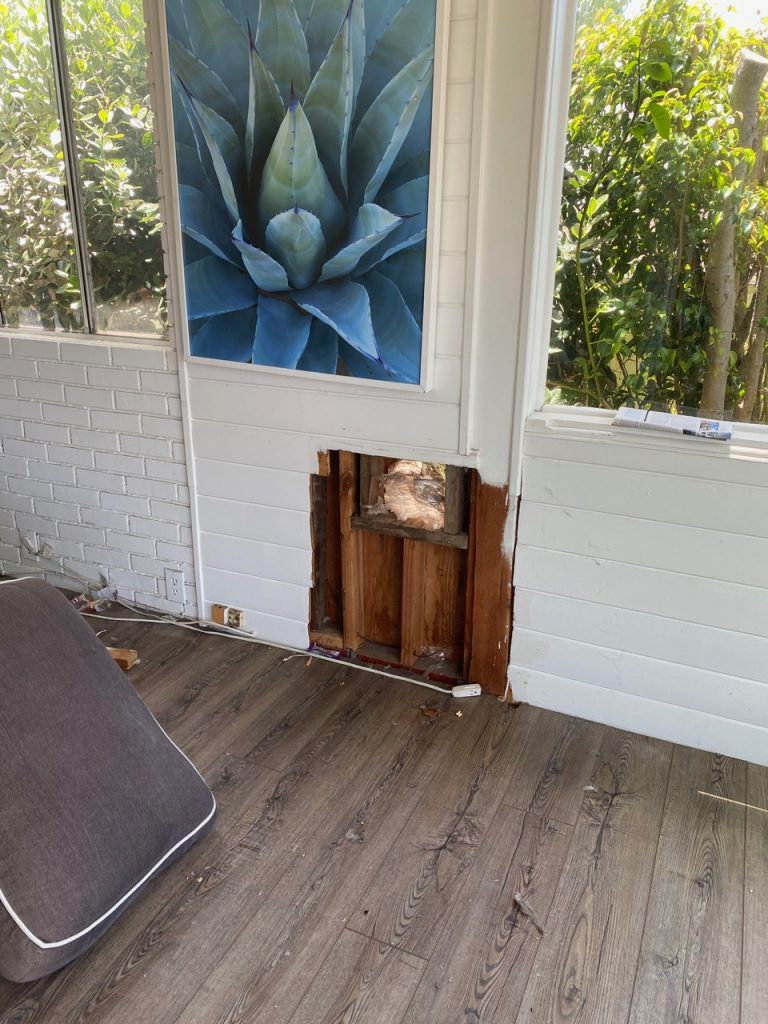 P.P.P.S. I blame the teenage boys. For everything.