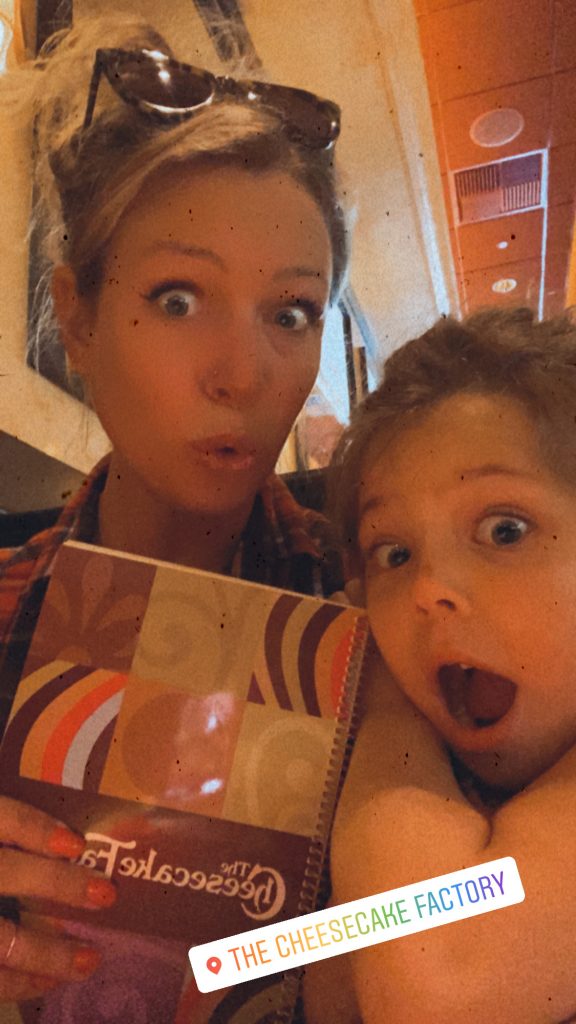 OK, so going forward I will 1000% be doing my best to spend all my dining-out dollars at smaller, locally-owned establishments, but if you’ve ever had the bread basket at The Cheesecake Factory, you know why my children (and, okay, me) chose it for our first restaurant meal in…four months? Twenty years? Several decades?

It’s been awhile. I was ready for some food that I did not cook myself.

So for this post, let’s answer all your burning questions about what a Cheesecake Factory experience is like in Covid Times.

Arrival: First, um, CHEESECAKE FACTORY TAKES RESERVATIONS NOW. Thank the lord, because the check-in situation with the two-hour waits and buzzy things was a horror show in normal times; now all that host stand-crowding would be very no bueno indeed. We checked in with the host stand (now located outside), and were asked to wait outside until our table was ready, which took about five minutes. And those buzzy things? They are a relic of the past.

The Cleanliness Situation: Never have I ever had a cleaner dining experience – and I mean that. I’m typically a little icked out by big restaurant booths generally, just because there are so many places for crumbs and germs to hide in them, but my booth felt honestly impeccable.

Diners are spaced out with at least one booth or table between them, and the entire booth (including light fixtures) is wiped down in between each seating. You sit down at a completely empty table, and place settings only arrive once you’re settled.

You’re offered the option of a digital menu (accessed on your phone via a QR code) or a real one – and if you choose the latter, know that after you use it it goes directly into a designated box, where it will have every single page wiped down before it’s given to another diner. Those menus have a lot of pages. Go digital, to give your servers a break.

Service: Everyone from the host to the servers to the bussers seemed genuinely happy to be back at work. But here’s where it got interesting: I asked our server how the experience had been for her, and she looked around before answering to make sure she was out of earshot (oh dear). She said that the company had been “doing its best” and that workers had kept their health insurance during the pause in operations, but not their wages. She admitted that – of course – tips are way down, simply because there are fewer diners. She also said that diners have been falling into two camps: Those who are happy to be back out and show their gratitude accordingly, and those who are completely put out by the concept of flexibility – as an example, the afternoon that they opened it was apparently quite hot, and a number of diners stomped their feet about having to wait for a table outside rather than in the foyer. These people are assholes.

TL;DR: We all know how hard this has been on the service industry. If you choose to go out to eat, show respect for your servers by washing your hands, wearing a mask whenever you’re able to (e.g. at all times when you’re not physically eating), ordering quickly, and departing right when you’re done. Oh – and tip big. HUGE.