Cracking Up: The Story of My Divorce (Part One) 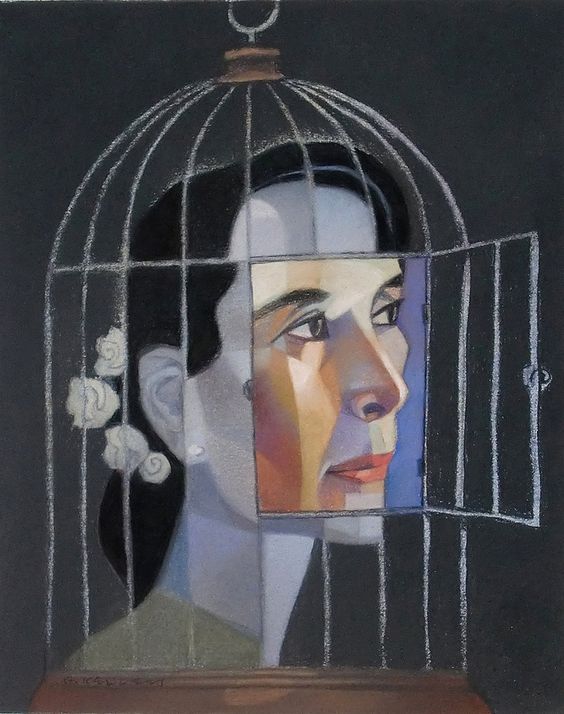 Very few people are capable of talking openly and honestly about crises in their lives, and even fewer are willing to explore these crises while they’re in the thick of them. This has always been a particular sticking point for me: I’ve never been able to write about a major issue in my life until it has been resolved. It makes me feel too vulnerable.

My friend EB is braver than I am, and offered to tell the story of her divorce even as it’s unfolding.

PART ONE: BUYING THROW PILLOWS FOR THE CAGE

Thousands of silent pains make up the life of every woman. The quiet indignities of cleaning up that sock again in the dark before bed. Washing dishes alone in the kitchen, while laughter filters in through the other room. Crying with the baby in the middle of the night. The monthly cramps that punch you so hard you swallow vomit. Your lips aching while you say again, “Oh, he just had to work today” when you really want to scream “That asshole is taking another nap and refuses to come to kids birthday parties.” The boss who always looks at your breasts instead of your eyes. The family friend who likes to tell you about all the sex he has, while his mouth is full of spit and yours is so dry.  Knowing exactly how to hide puffy eyes with just the right amount of cold compresses and makeup. Or hide them enough so that the men never notice and the women know to look away.

Three weeks ago, I decided I wanted a divorce.

I’ve been married for over 12 years. We have two kids. I never wanted this. When the cracks first began to appear, I figured I could fix most of them and live through the rest. I read about women who had famously fraught marriages—Eleanor Roosevelt, Shirley Jackson, Mary Shelly. I could be like them. There is a certain glamour, after all, in bucking up—in carrying your head high and soldering through. That’s American, after all. The women who sigh, heft the baby to their hip, found a company, run a campaign, “in spite of” not “because of.”

In the concept of love that I had been taught as a child, one celebrates longevity over happiness. God cares more about character than comfort, I was told. The lesson is found in enduring a trial, not in finding your way out of it: A lesson in giving and giving, and expecting nothing in return. We laud the martyrdom of our women. The higher your cross, the more ornate your Mother’s Day card. “My mother gave me everything and did nothing for herself,” grown men say, as if that is an accomplishment to celebrate rather than a tragedy to mourn.

But freedom is harder to come by than simply redecorating your cage. So we went to therapy. I signed up for a lingerie of the month club and scheduled a babysitter for regular nights out. We needed to connect again, that was all. If only we could connect, he wouldn’t tell me again that my career was a waste, or that I was valuing it above him. If only we could be intimate, maybe he’d feel energized enough to relieve me of the laundry, the cleaning, the next appointment that needs to be made. Maybe we could take cooking classes? Do a puzzle together? A vacation should solve it. A scented candle. Saying “I love you” just a little more. A thousand little things that never worked.

The day I decided to divorce my husband was the day I discovered he’d hidden my sign again. I’d bought a wooden sign from the Target dollar spot that read, “Drink up, witches!” and I thought it was funny in that basic, wine mom kind of a way. It cost three dollars. I brought it home and set it up on the hutch.

Soon the sign disappeared. I found it hidden on the top shelf of the hutch. I set it back up. It disappeared. Over and over again, until I finally snapped. “Stop hiding my things!” I screamed.

It wasn’t just the sign. Previously, he’d hidden other things: my shirts, one with “Nevertheless She Persisted” written across it, others just button-ups that he didn’t like. A mug that read, “this could be whiskey.” I found them all in hidden caches of the basement.

You can’t hide who I am, I’d told him. I’m not, he said. I just find your stuff offensive, he said. I’ve been doing this for years, he said.

That was the day I moved out of our room into the guest room. I was still certain we were going to work this out. What was a thousand tiny little pains in the face of a long life? At what point does a marriage tip over from normally broken into permanently damaged? I held on, not sure whether we’d hit our own, personal tipping point yet. We did more counseling. But then I bought home a sign that said, “Drink up, witches,” and it disappeared. And that was it. That was the moment.

A  friend of mine told me that her moment came when her husband complained about the omelette she’d made for him one Saturday morning. “Feta?” he’d said, sneering, still rubbing sleep from his eyes. She’d been up since five in the morning, getting things done around the house. She slammed the whole meal into the trash, and left the next week.

A thousand little pains. A million little cuts. Fucking done. Sorry Eleanor, sorry Shirley, sorry Mary. This isn’t about comfort. My character is fine. And no amount of redecorating can make this cage I’ve been living in bearable.

EB is a writer and a mother living in the middle of the country, and like so many women is struggling with her marriage.