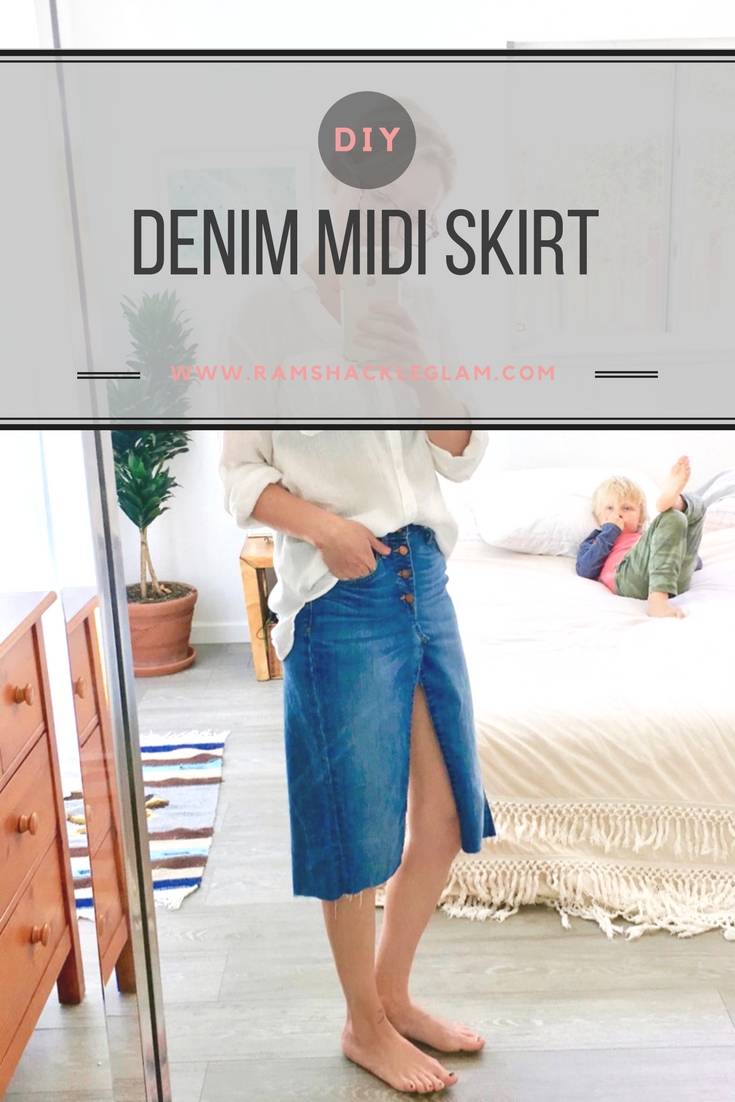 My son’s expression here kills me. (“What. Is my mother. Doing.”)

Remember the post I put up the other day about Kendall Jenner? The one where I talked about how she made me want to own confusing things? Well, one of these things was a $430 denim midi skirt. Which is clearly a ridiculous thing to purchase, when – as I said in the post – you can DIY this so easily.

And then I realized…I mean, I don’t really know if you can DIY it so easily. Because I’ve never actually done this. It just looks easy.

So I tried it, and yes: easy. Even if you aren’t great at sewing, and don’t own a sewing machine (even though the latter would help), if you can thread a needle, you can do this. Let me lay it out for you.

First, here is a pair of jeans that I own, reluctantly. 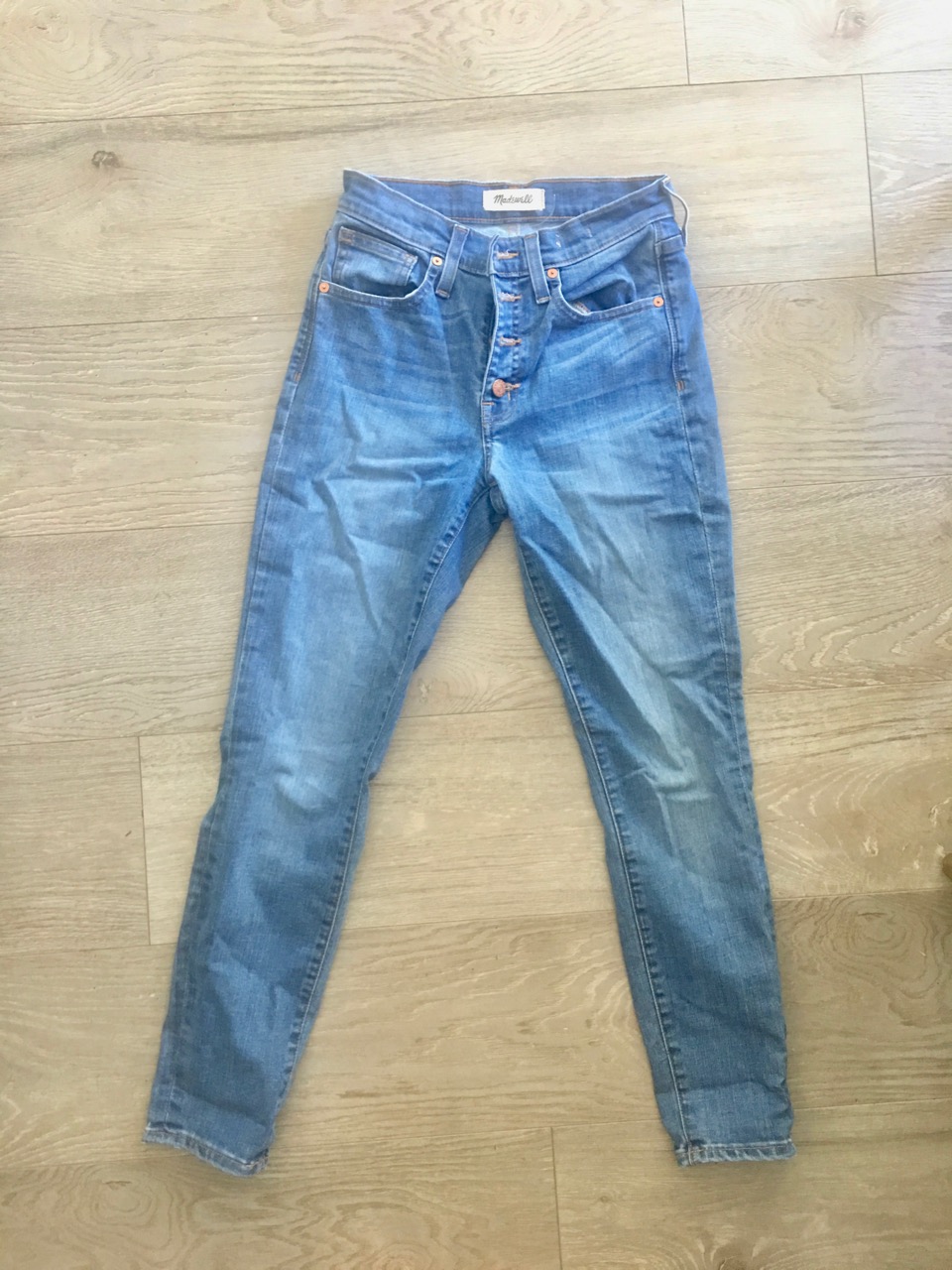 (I know. They’re wrinkly. It’s because they’ve been sitting in the bottom of a drawer, unworn, pretty much since I bought them.)

I love Madewell jeans. I do not love these Madewell jeans. They are tight in the waist and through the leg, and ordinarily that would be okay, if not especially comfortable, but something about the way that these fit makes me feel – and look – like I’m wearing a sausage casing.

So go find your own pair of jeans that you reluctantly own (make sure they’re high-waisted, but as far as the rest of it, anything goes). Put them on, and use a washable marker or pencil to mark the spot where you’d like your skirt to hit. I went for a midi length, but a mini version would be cute, too. (I’ve even seen maxi skirts made this way, and the look isn’t for me, but it’s definitely cool-looking.) 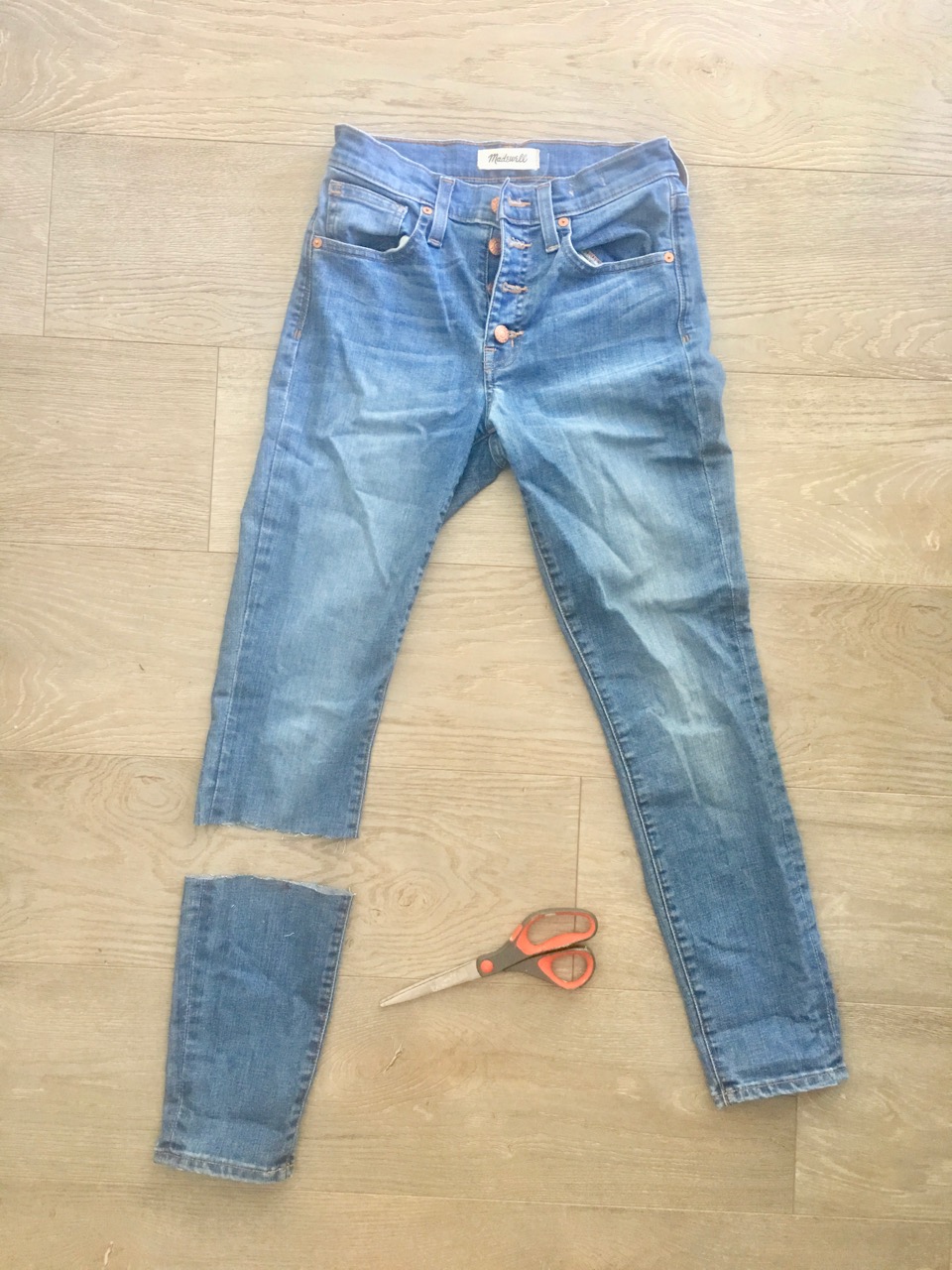 Cut the first leg in the spot where you want the skirt to end (or maybe a hair below, since the denim will fray over time). Then lay the piece that you cut off the first leg on top of the second leg – this is the most foolproof way to be sure both sides are the same length. 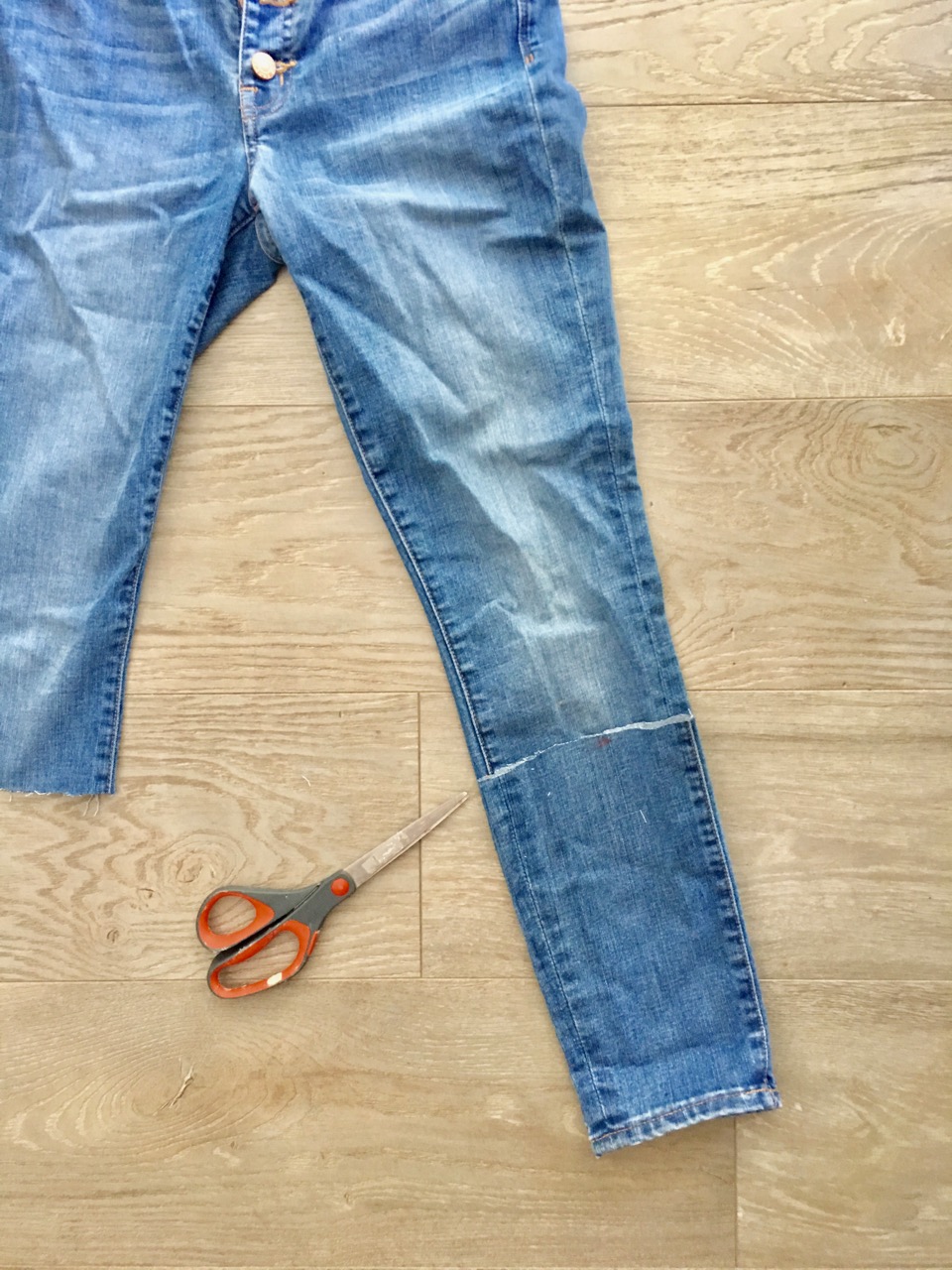 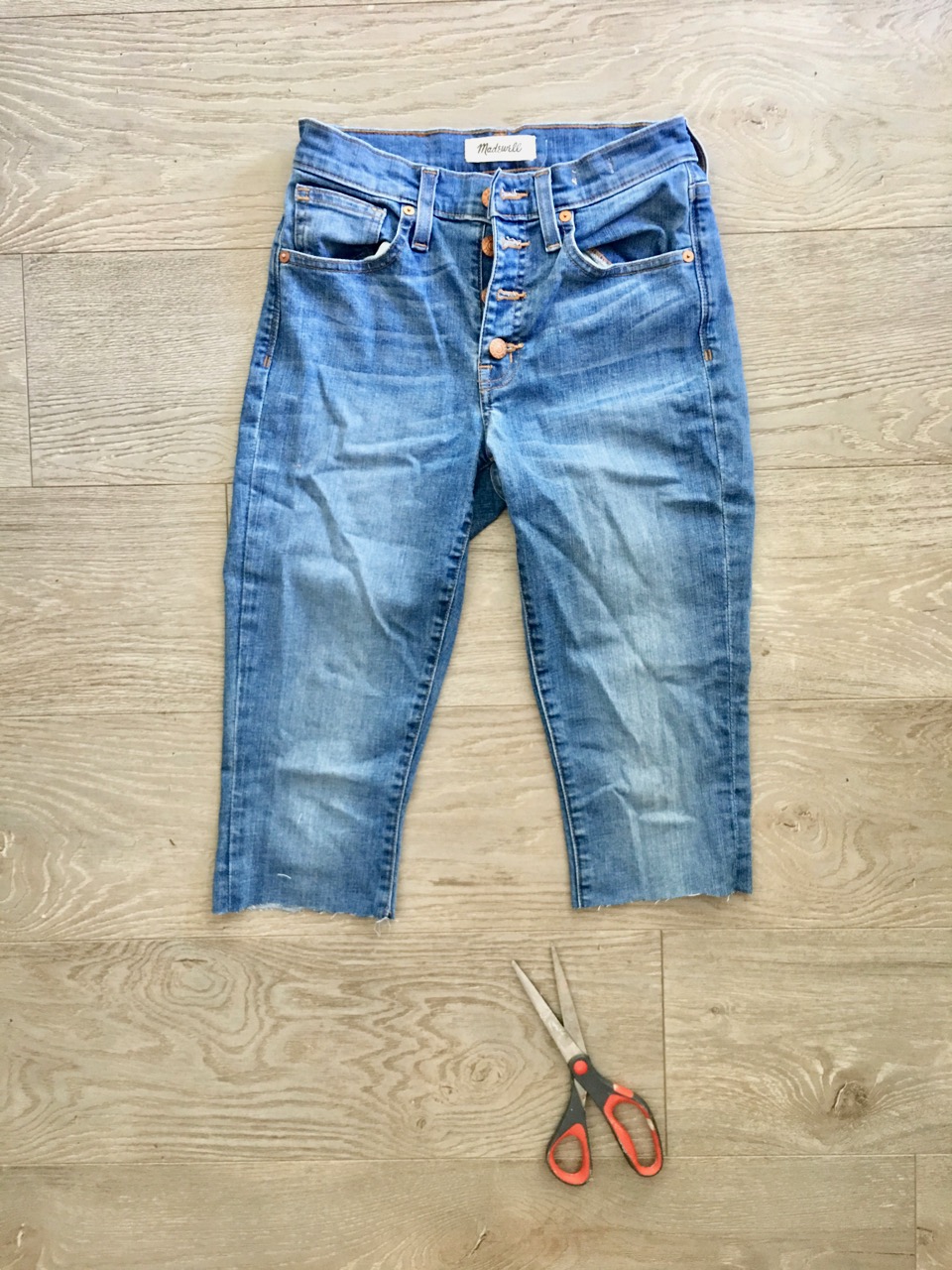 Next step: opening up the entire inner seam of the pants.

Now’s when a seam ripper would come in handy, but I don’t own a seam ripper. I only own a little crochet-hook-type thing with a sharp edge, so first I tried using that. 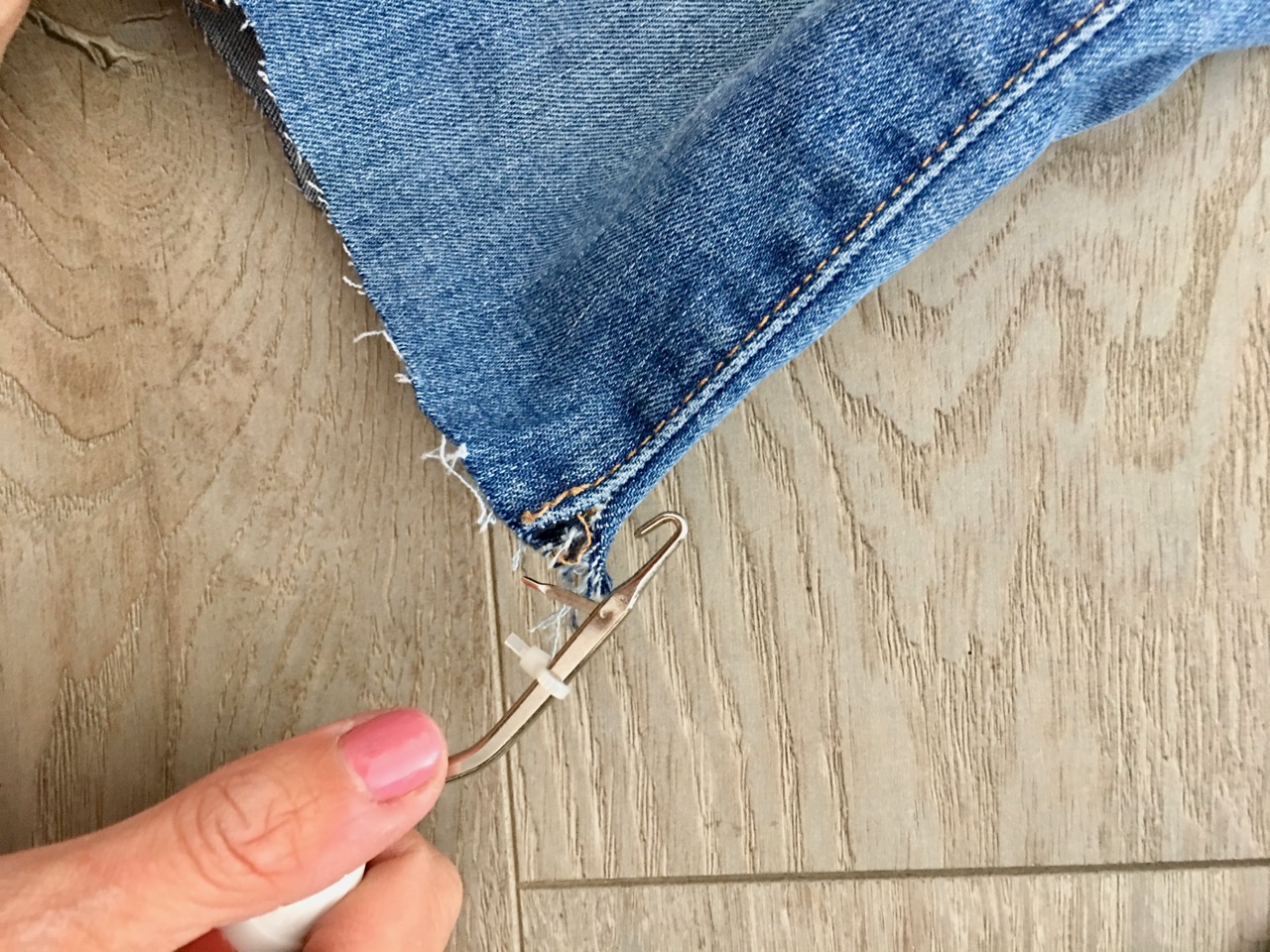 It didn’t work very well, and I got impatient. So I just used scissors. 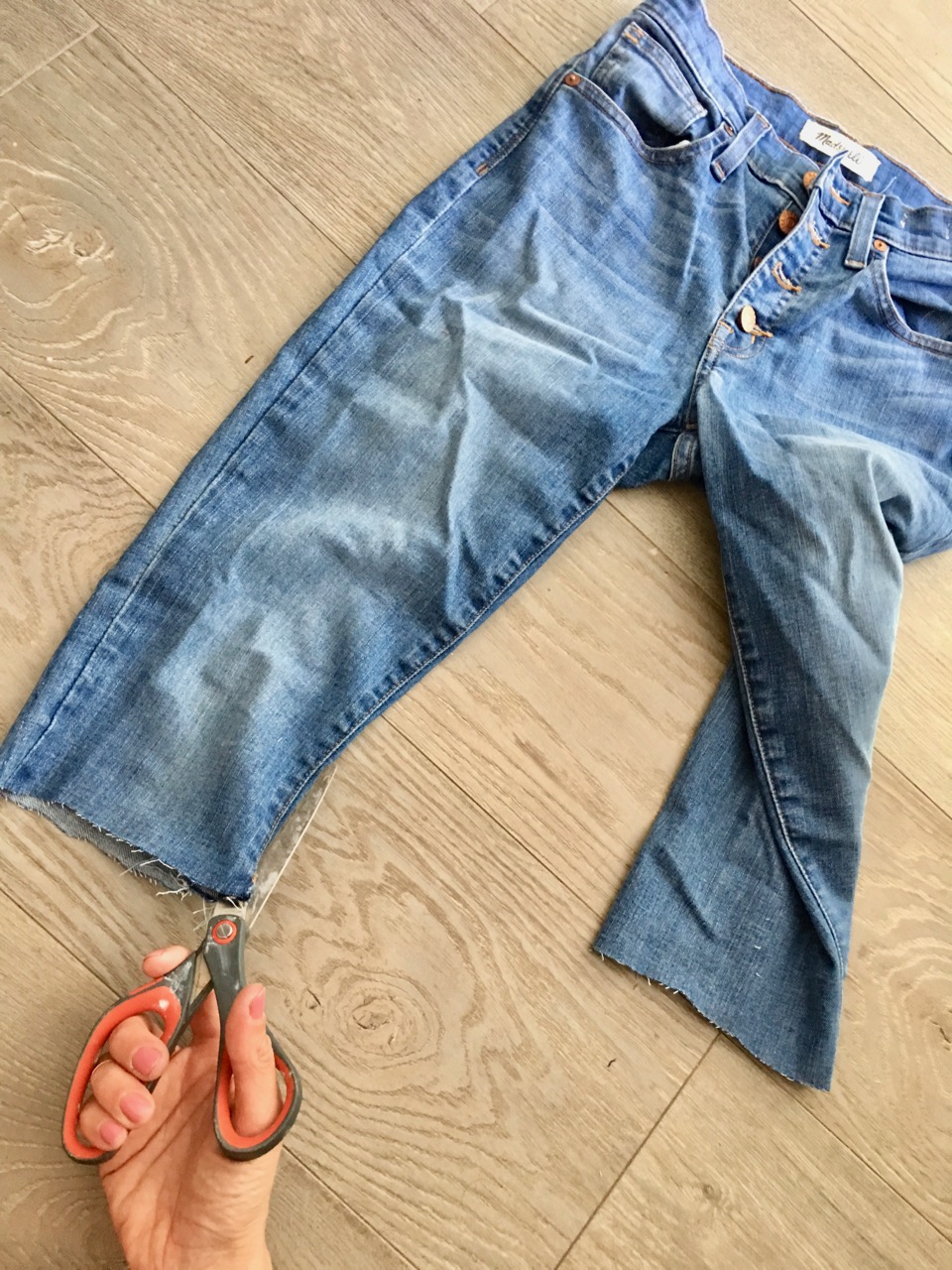 (Which ended up being totally fine.) 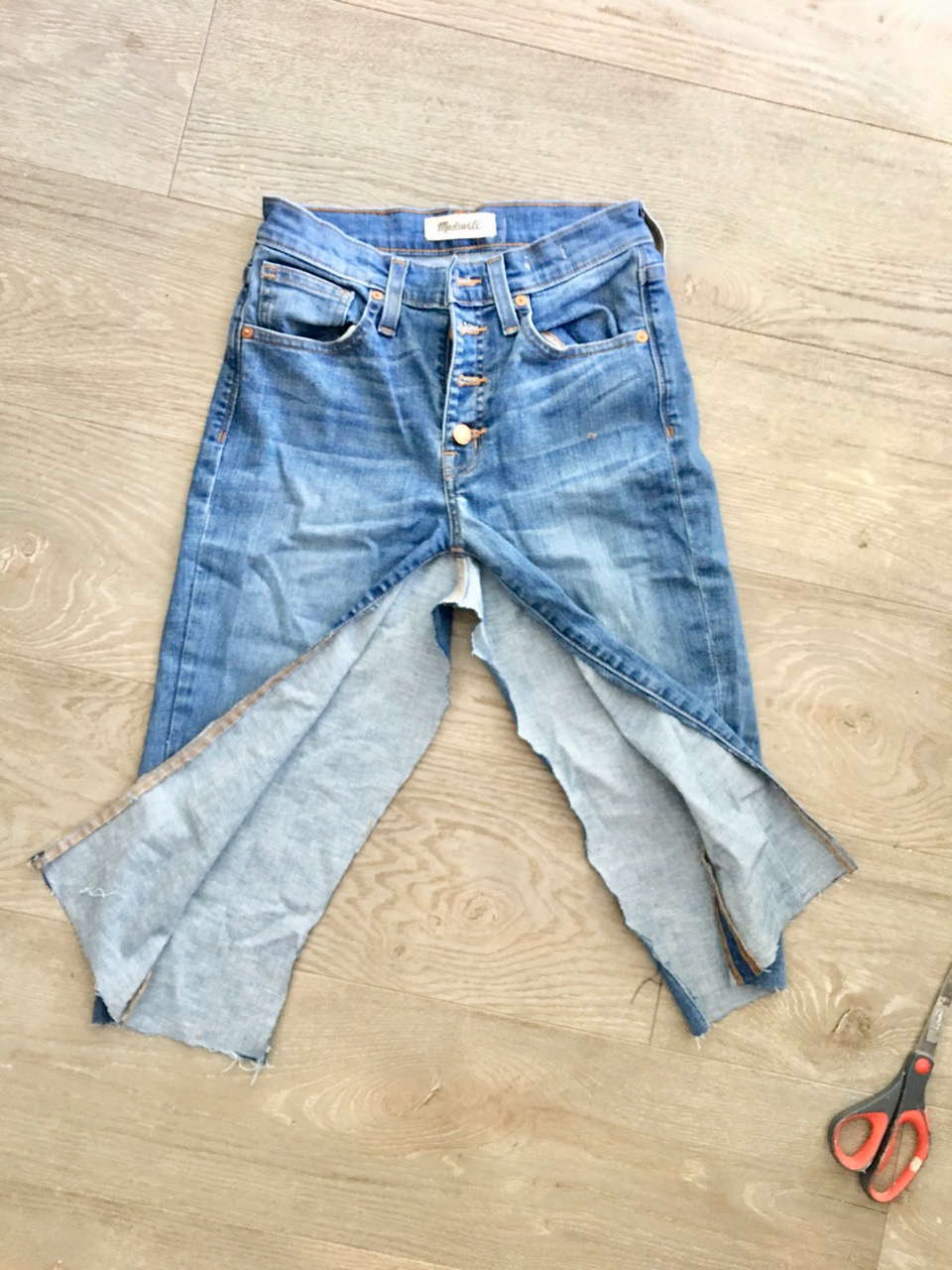 Here’s what you end up with once you’ve opened up the entire inner seam. For some reason I think this is creepy-looking. 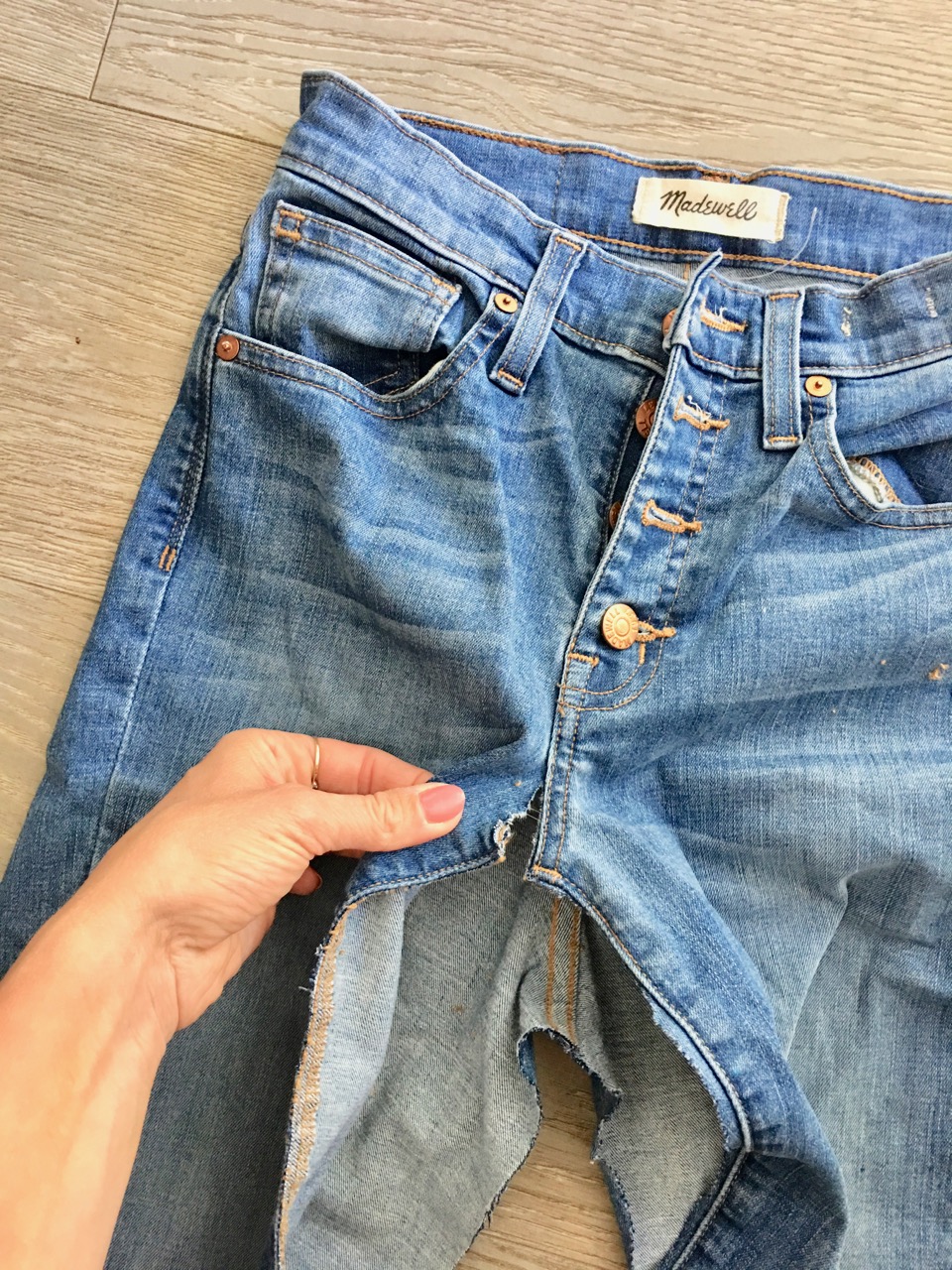 Now you’re going to cut a little more into the front seam – maybe an inch and a half, two inches (just be sure not to hit the zipper or button area). 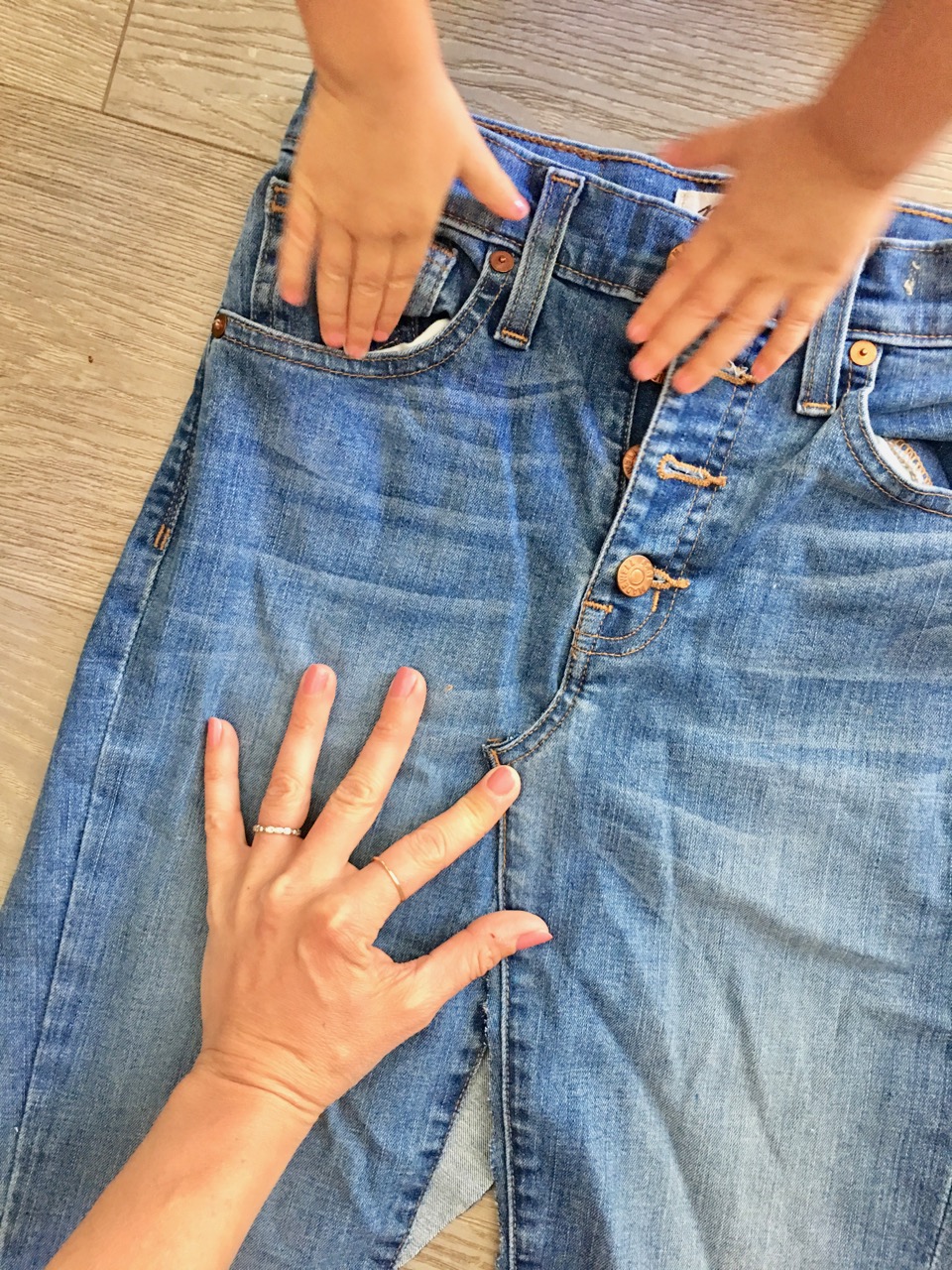 Cross one side over the other, and sew the two pieces together, making sure to make your seam extra-strong right where the slit starts. (My daughter was very helpful with this step, as you can see.) 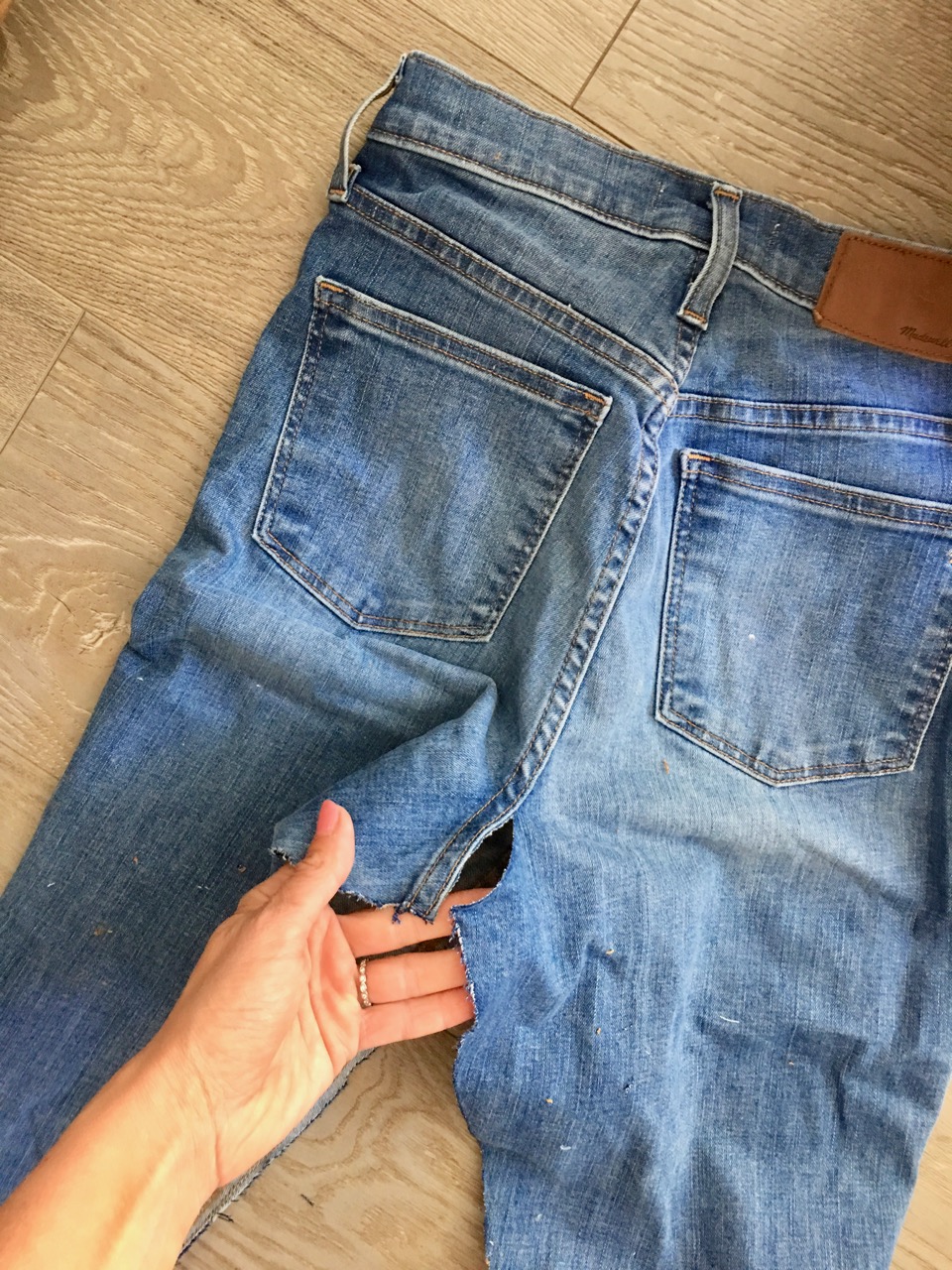 Same thing on the reverse side. Cut into the seam… 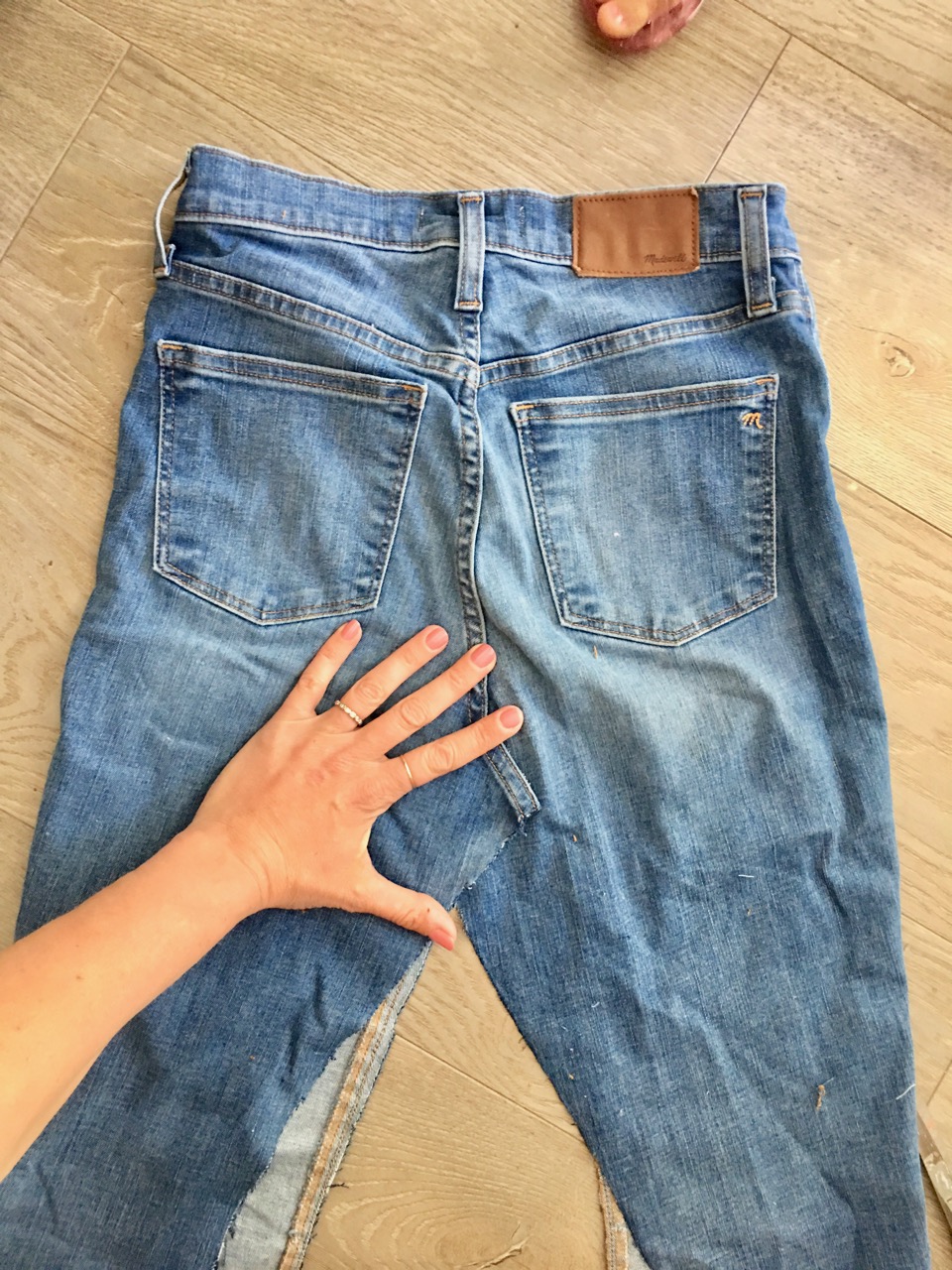 Cross over, and sew. A sewing machine would make the process super-fast and neater-looking, but the entire surface area you have to sew is something like five inches, so you can totally do this by hand. 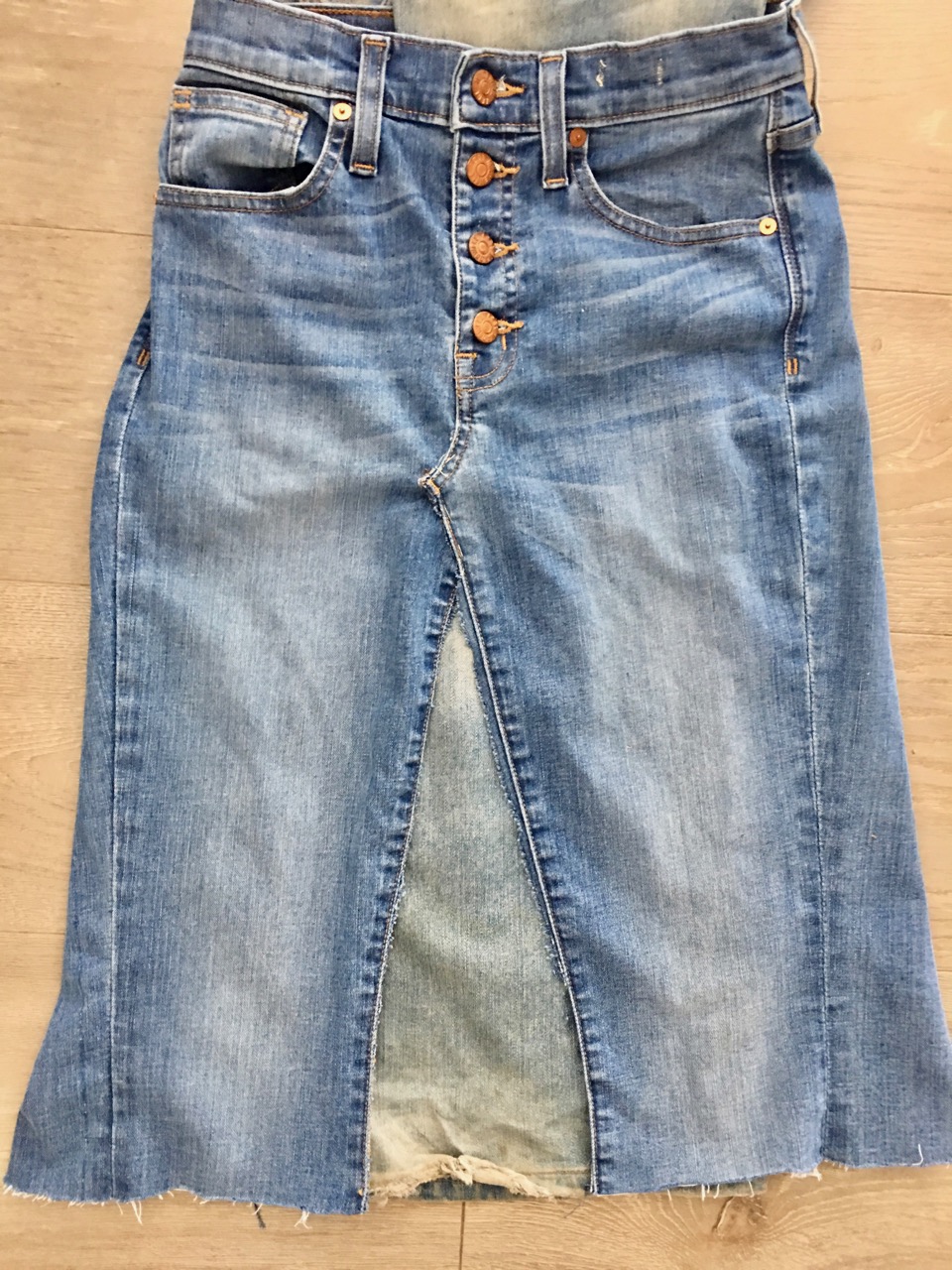 Now, I’ve seen a lot of designs where people use a contrasting piece of denim to fill in the slit, as pictured above. I like this for a miniskirt version of the style (it even seems necessary, so that the skirt isn’t too revealing), but for a midi I prefer leaving the front open so the effect isn’t too heavy.

(I left the back slit open too, because lazy, but am thinking I might add a piece of fabric later on. I dunno.) 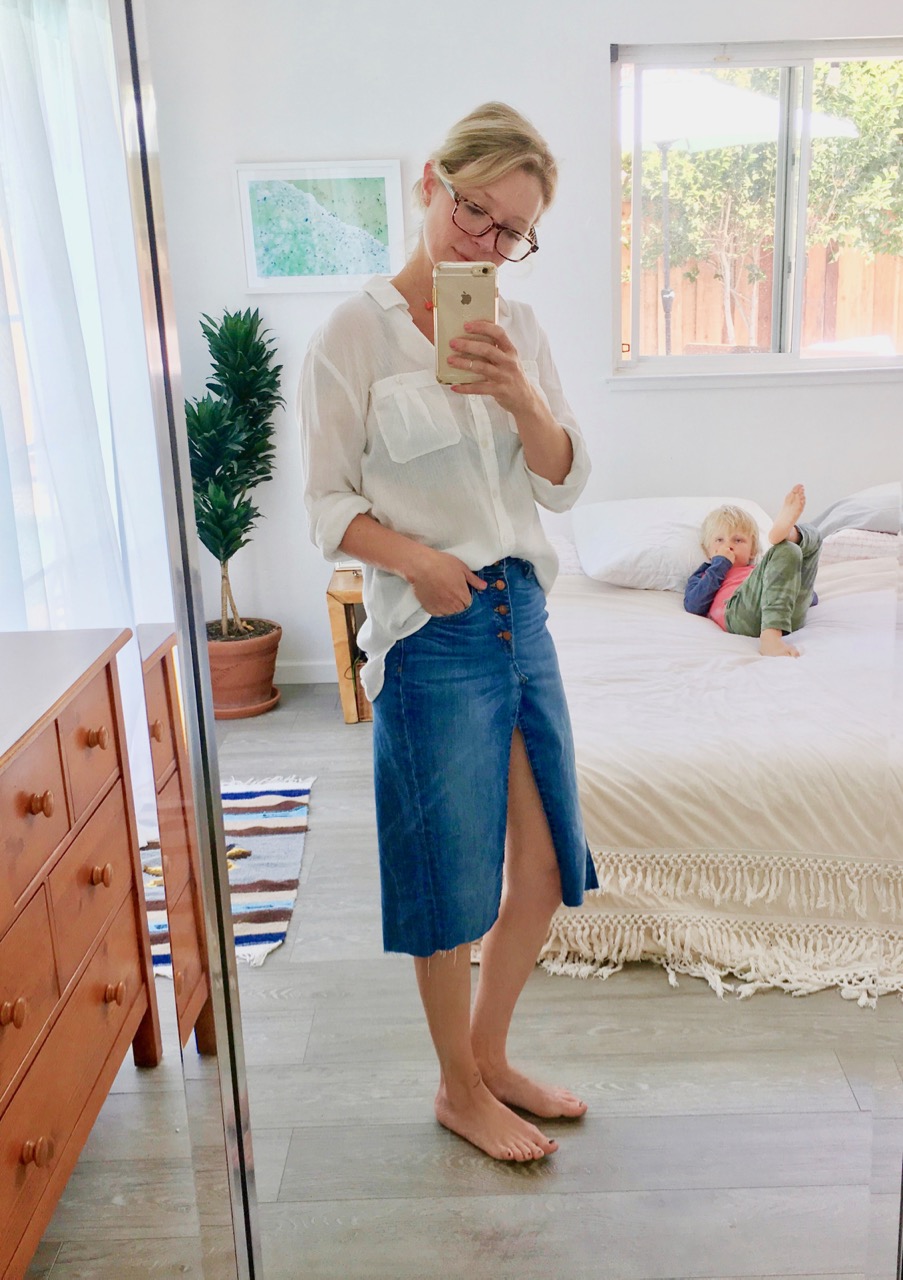 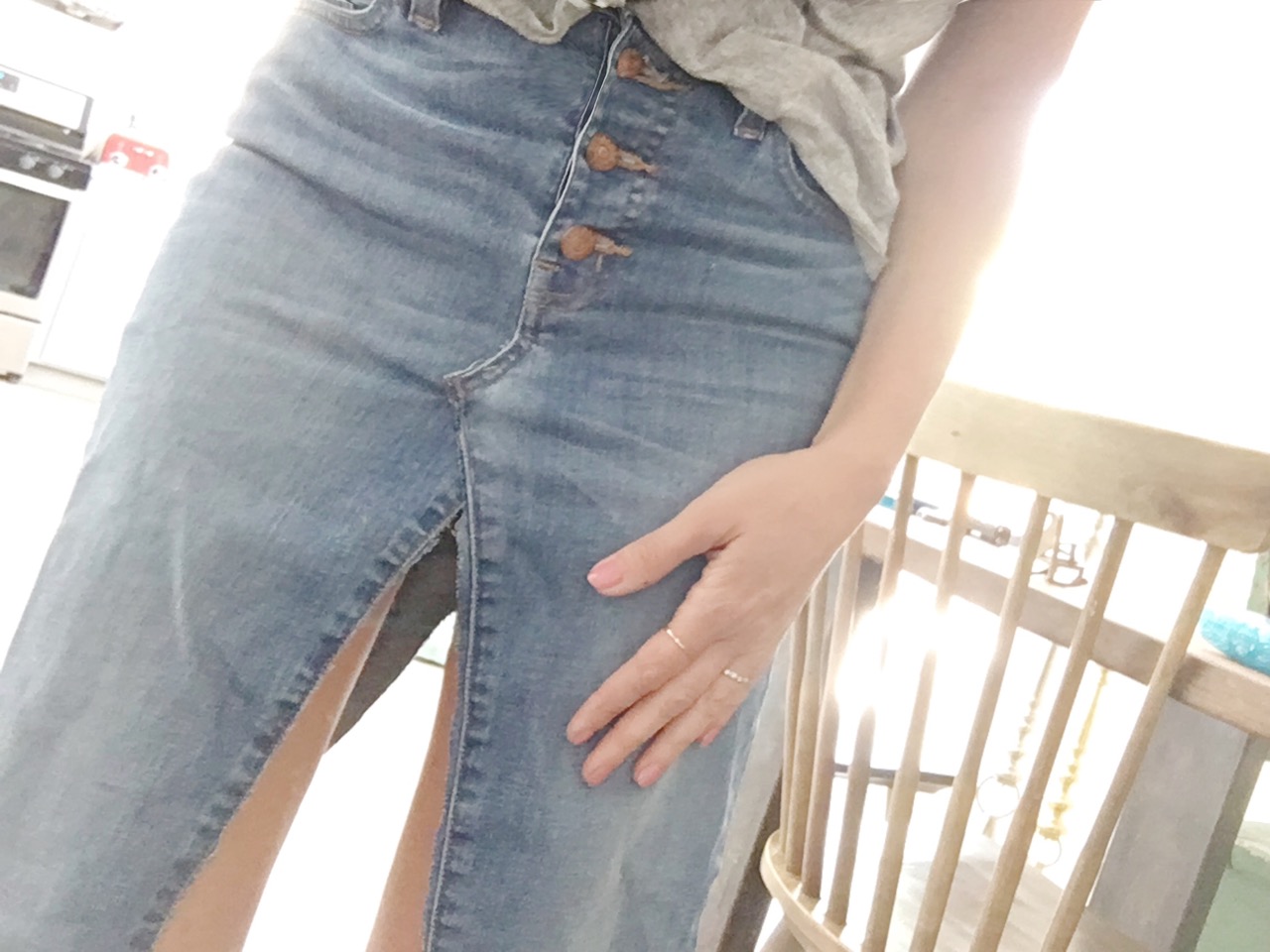 (And yeah, it’s short in the front, but I promise it’s not indecent 😉 ). If you want more coverage, either add a small triangle of fabric to fill in the very top of the slit, or just cut further into the front seam before crossing one piece over the other and securing – that’ll make the gap start lower down. 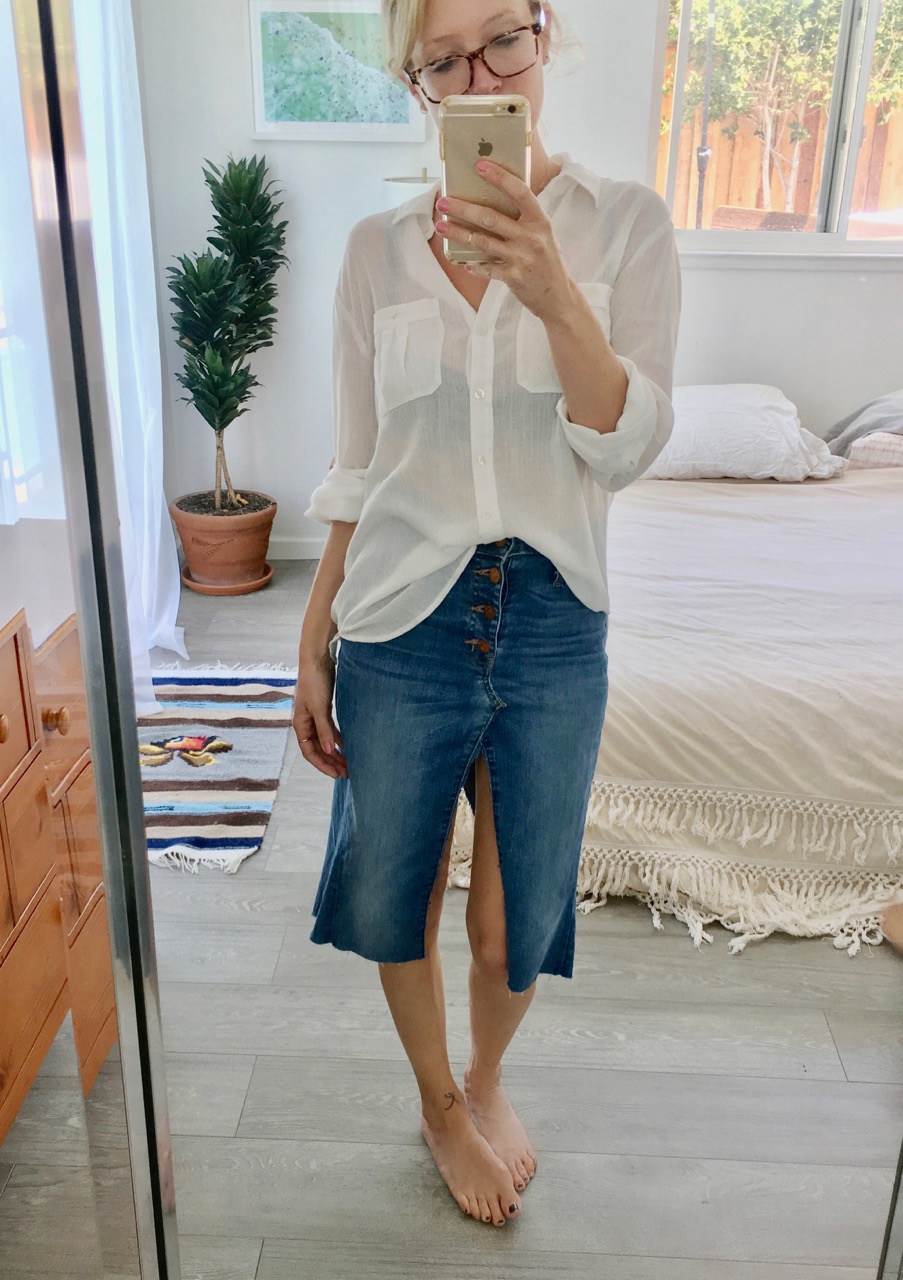