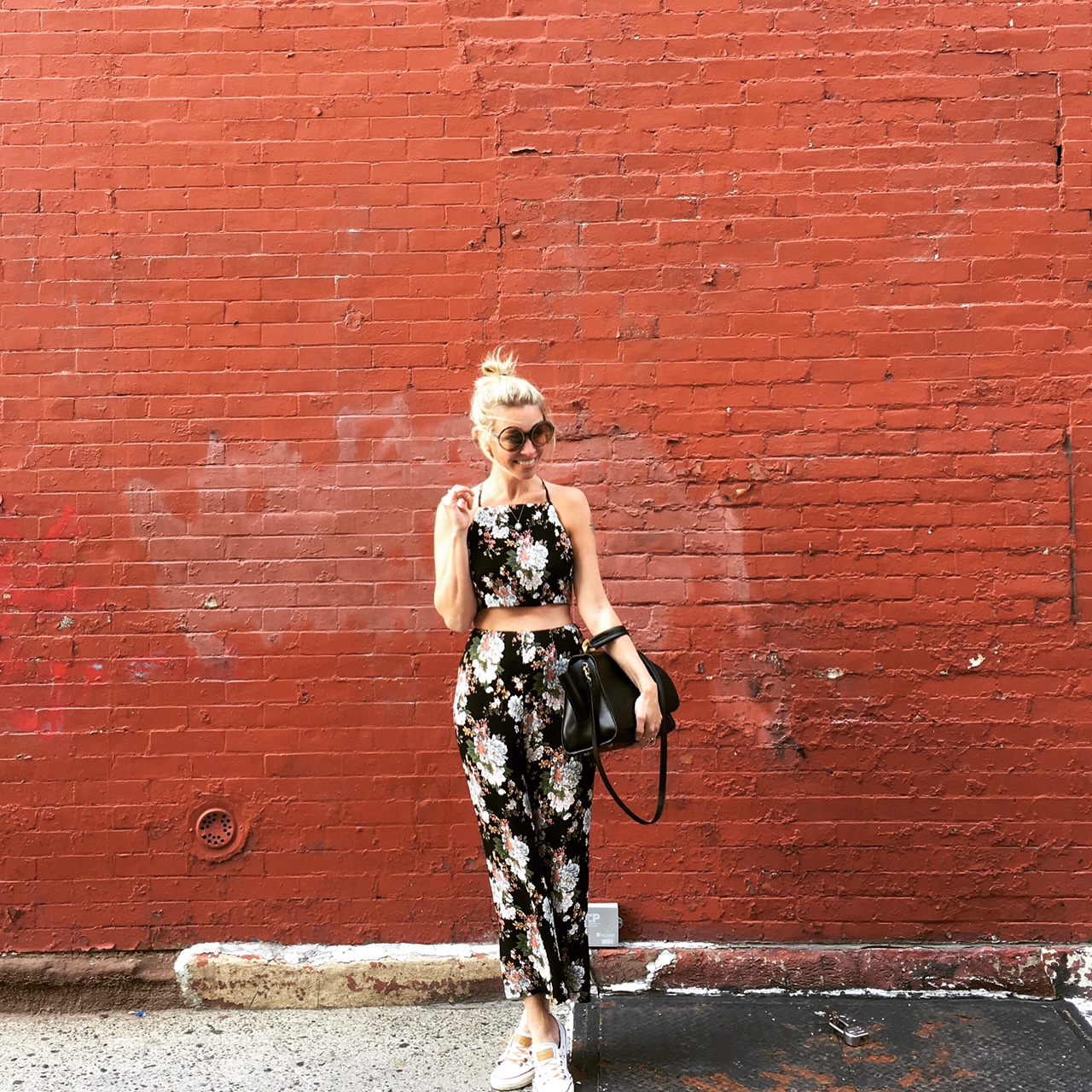 I had no idea what to bring with me for this trip. The weather was maybe going to be lovely and hot, or maybe cold and rainy (it has, in fact, been both). I was planning to spend most of my time sitting cross-legged on Erin’s couch squinting at computer screens and talking about exciting things like page margins, but also had a couple of client meetings for which I’d need to wear something more closely resembling actual clothing than my ugliest pair of leggings (which are obviously my favorites). And then there’s this: in two days, after I finish up everything I have to do here, I’m flying back across the country with Goldie, spending about eight hours at home with Kendrick and Indy, and then going straight back to the airport to get on a flight to St. Louis. I’ll explain why later, but the logistics and emotions involved in that rapid of a turnaround – mostly the fact that I’ve never spent two whole weeks away from my son, and my heart hurts when I even think about it – are obviously stressing me out.

And when I get stressed out I tend to overdo things a little.

One way that my hyperdrive tendencies expressed themselves on this trip: I erred on the side of packing a little bit too much. And then I left most of what I brought completely untouched, and rotated through the same three or four pieces over and over again, bcause I am the same way with clothing as I am with food: I decide I’m into, say, Peanut Butter Puffins, and then eat Peanut Butter Puffins every day of my life until the day that I decide I can’t even look at them ever again, and move on to a new overpriced and semi-organic breakfast food.

(On this trip, the Adulting sweatshirt and a pair of high-waisted floral silk pants were my Peanut Butter Puffins. Re: the latter – who would have guessed? Certainly not me; crop tops and silk anythings have not historically been items that I’m especially partial to, but there you go. Busy containing multitudes over here.)

Here’s what I’ve been all about over the past week, both clothing-related and non.

1. Gucci Mini Bag (purchased secondhand via TheRealReal; don’t worry, I didn’t spend multiple thousands of dollars on a bag). The thing about miniature bags is that they hold one tiny iota-fragment of what you need as a human being, and an even smaller fraction iota-fragment of what you need as a parent. But I happen to own the most amazing, teeny-tiny (we’re talking five inches, maybe) bamboo-handle Gucci bag, and I never, ever have anywhere to wear it because I’m always carting around the equivalent of Everything. But through sheer force of will I managed to make the Gucci bag happen a few times while on this trip. (Basically, I put everything I actually needed in the bottom of the stroller, filled up my purse with a credit card and a bobby pin, and went on my way.)

2. Library of Flowers Bath Oil. I used to take baths at my parents’ place whenever I visited because my house didn’t have a bathtub, and baths are my favorite thing on the planet. Now I have a bathtub of my own, hooray, but I’m still in the habit of ending the night in the company of some bubbles when I come here…and now there’s the added bonus that while I’m in the bath, I can hear my father using silly voices while reading to my daughter in the other room, and there goes my heart.

3. Sushiiii. I’m sure there’s really good sushi in the Bay Area. I have not found it. (Or at least I haven’t found it anywhere within 20 minutes of my house.) In New York, even bad sushi is good sushi. I should know; I’ve been eating it every day.

4. Floral Silk Pants (half of this jumpsuit). They’re so good. I’ve been wearing them out at night with the matching crop top, and during the day with a grey sweatshirt or black long-sleeved top, and they instantaneously make me feel all stylish and cute, even when the reality is that oh man, is my hair ever bad this week (see: cold rain).

5. MCMC Fragrances Phoenix. I’ve written before about MCMC’s Hunter (a bourbon, tobacco and fir perfume that I’ve been all about for the past year), and now I have another favorite. Phoenix is a cherry blossom, neroli and vanilla blend that’s light and springy without being too flowery or sweet, and I LOVE it.

6. Hi-Lo Tank. This Zara top is super comfortable and looks good with everything – with jeans and heels, with leggings and boots, with shorts, with whatever – and has been my go-to on days when I have to be presentable but not fancy.

7. Wood Platform Heels. Heels aren’t especially NYC-friendly – one of the best parts about the city is all the walking you get to do – but I know myself, and once night falls I become extremely, extremely lazy. I may say I’m going to take the train downtown to see some friends, but what is actually going to happen is that I am going to putter around until “it’s too late to take the train” and call an Uber. So: heels it is, yay. (The ones I brought are a Chloe pair I found secondhand, but these are similar.)

8. Free People Bra. The lingerie at Free People resembles super high-end stuff while being way more reasonably priced. This bra is so pretty you can let it peek out of your clothing, so it’s perfect for wearing with tanks with big armholes or deep-v dresses (both of which I’m into right now).

9. My Beyonce Stroller. Two full years after I first got my hands on it, this stroller continues to be the fanciest thing that I own. It has headlights. It charges my phone. It has a little LED screen that tells me the temperature. I call it my Beyonce stroller because it makes people panic with the amazingness; I’m not exaggerating when I say that I actively skip using it on days when I’m feeling antisocial, because I cannot walk five steps without someone stopping me to ask about it.

10. This Guy. His name is Bun-Bun or Peenk, depending on the day, and he is permanently attached to my daughter’s hand. I live in constant terror of his displacement via taxi cab.

Hold on tight, Bun-Bun. We’ve got a big couple of days ahead of us.