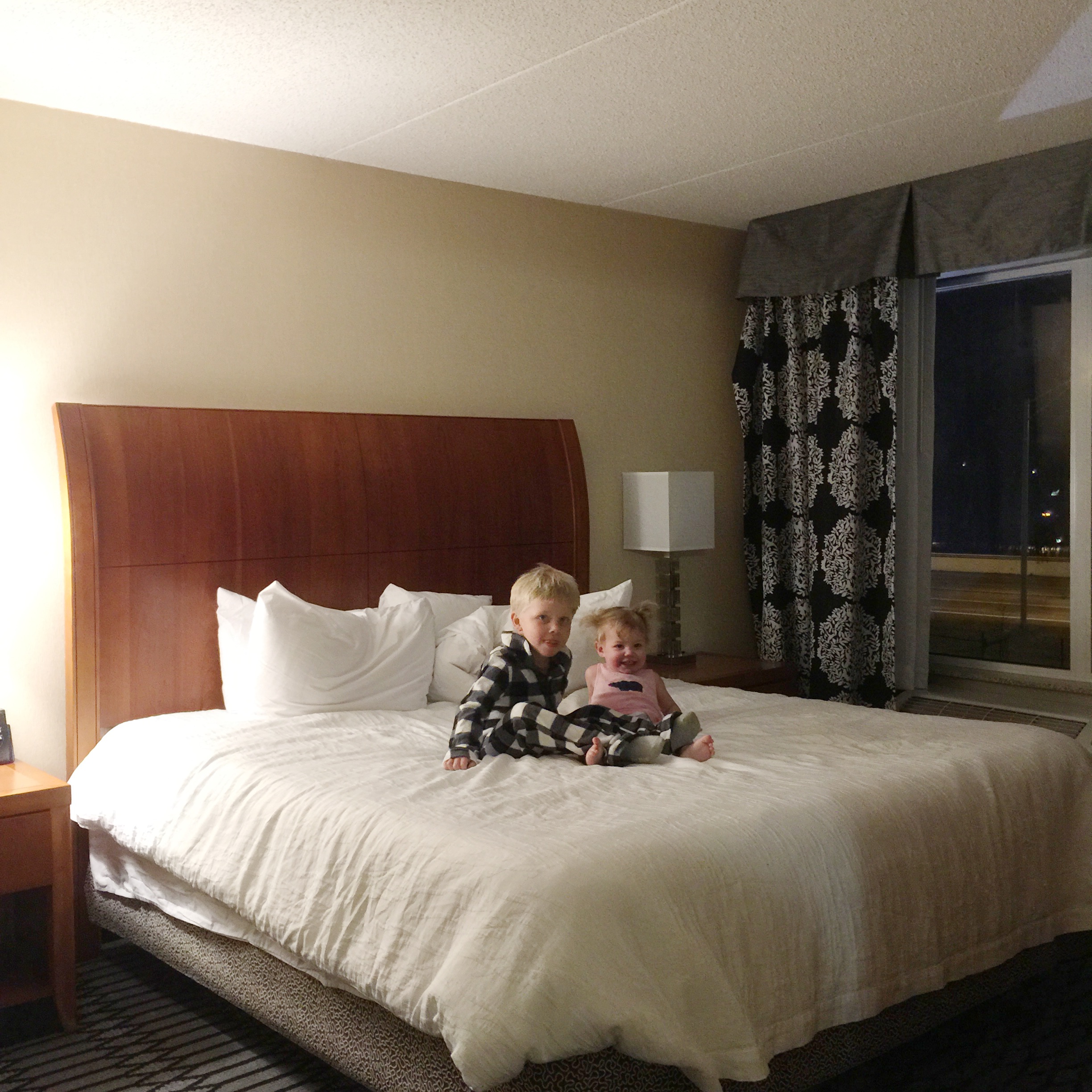 In our hotel room, about one hour before shit got real.

You may have noticed (or, I don’t know, maybe not) that I haven’t been posting about what we’ve been up to during our Ohio trip this week. There is a very, very good reason for this.

As a prelude, let me give you a sampling of the texts I got from girlfriends who were on the receiving end of updates as to exactly how exceptionally badly our week has been going.

This is the trip from hell. – Morgan

Have you ever experienced a full-family stomach flu? It’s really quite remarkable; I highly recommend trying it sometime, if only for the epic drama of it all.

So remember how Goldie had a little in-air episode? I thought it was airsickness because she bounced back literally within seconds, but apparently not, because by 1AM both Indy and I were having quite the time. I won’t go into details, but let’s just say it was intense. And lasted all. night. long. And then the next night, my poor broken-footed husband thought he’d take a turn.

Anyway, we’re all 100% better now, which is good because tomorrow we’re getting on a plane, and I would really very much like to not have a repeat of Saturday’s experience. And yesterday we actually emerged into the world, and took Kendrick’s niece on a shopping spree for her birthday to a bookstore and Old Navy. (It bears mentioning that while at Old Navy I found the very very cute shirt pictured below – I bought it a size too big so it would be extra-oversized – and an even cuter plaid dress for Goldie.) 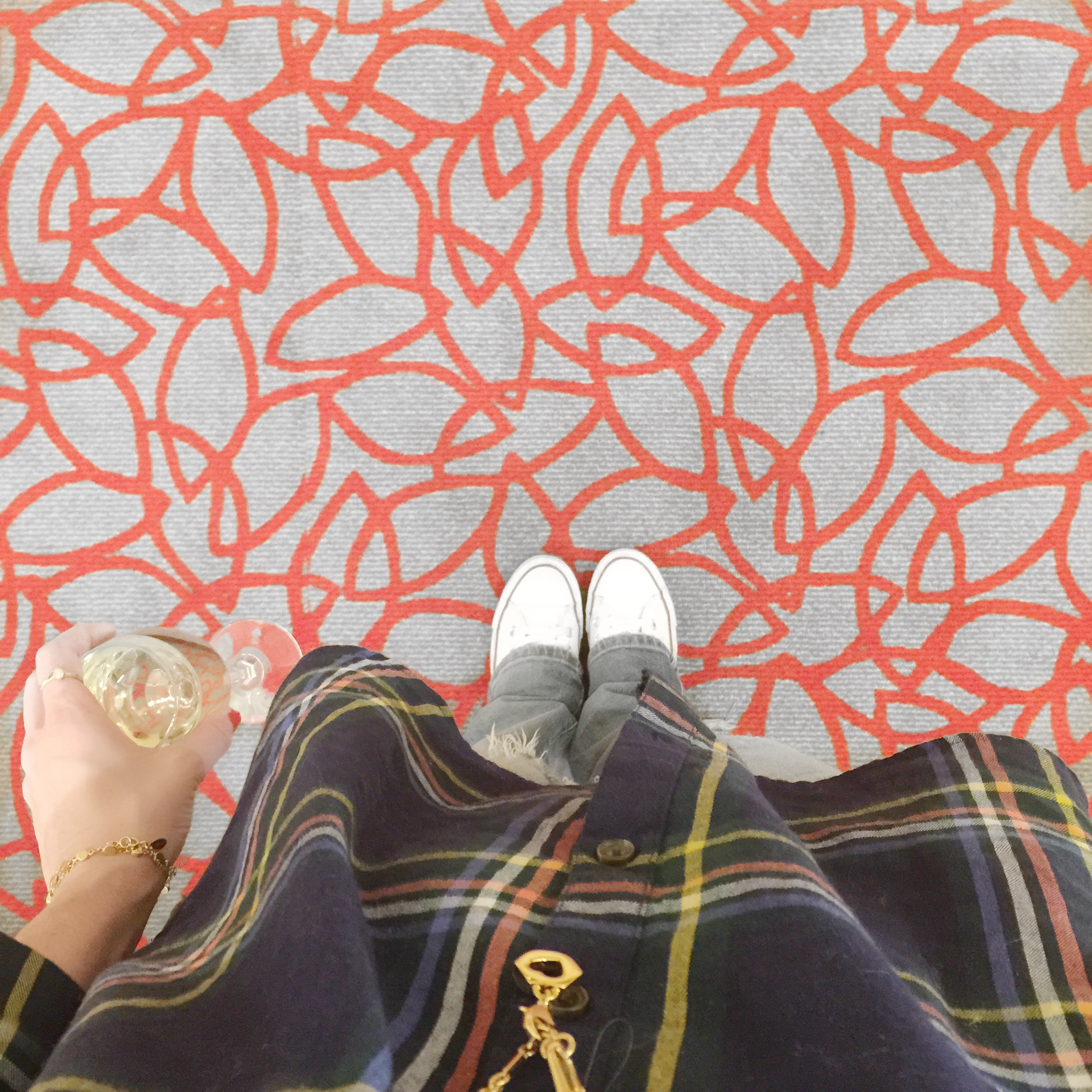 Hanging in the lobby with my new shirt and an intensely needed glass of wine.

I was talking on the phone to my mom yesterday and she said, “Ugh, it sounds like your vacation has been just horrible.” And I thought about it, and I realized – as crazy as this sounds – it actually hasn’t. It’s been…nice, actually. Yeah, we’ve been sick, and yeah, we’re all exhausted, and yeah, we haven’t been able to do a lot of the stuff we’d been hoping to do – but first of all, it doesn’t help anyone to get all upset about it. And more importantly: it’s life, you know? I mean, take our Christmas Eve, for example: if everything had gone as planned, it would have been nice and all, but not especially memorable. And now that day is going to go down in our shared history as one of the most ridiculous (and funniest) experiences we’ve ever had together. It’s going to be a day that our kids remember. And I’m willing to bet the memory won’t be a bad one.

Sometimes I think about those first few months after Indy was born; how it felt like the three of us were going through a war together. When Goldie was a newborn it felt almost preternaturally easy (because she was easy, but also because we knew what to expect), but Indy was tough: there were (many, many) nights when he cried and cried and cried, and none of us slept for even a moment. And it was miserable, of course…but I remember those nights, mostly, as beautiful in their own way. They cemented us.

These past few days we’ve been staying inside, but that’s meant a lot of playing; a lot of trips down to grandma and grandpa’s basement to hunt through boxes in search of long-forgotten toys. Last night we were finally hungry again, and so we made a run down to the snack bar for Snickers ice cream bars and Pringles, and had a midnight picnic on the bedspread. Indy’s gotten to fall asleep on his grandpa’s lap. We’ve watched movies; read books; ferried glasses of water to the person who needed it most.

So sure, this trip has been a mess – but it’s also going to be one hell of a memory. These mini-disasters that all families go through; they virtually always have the effect of somehow bringing you even closer together, so long as you let yourself ride them out, maintain something resembling a sense of humor, and remember that adventure is always found in the things that happen in between the things you expect. 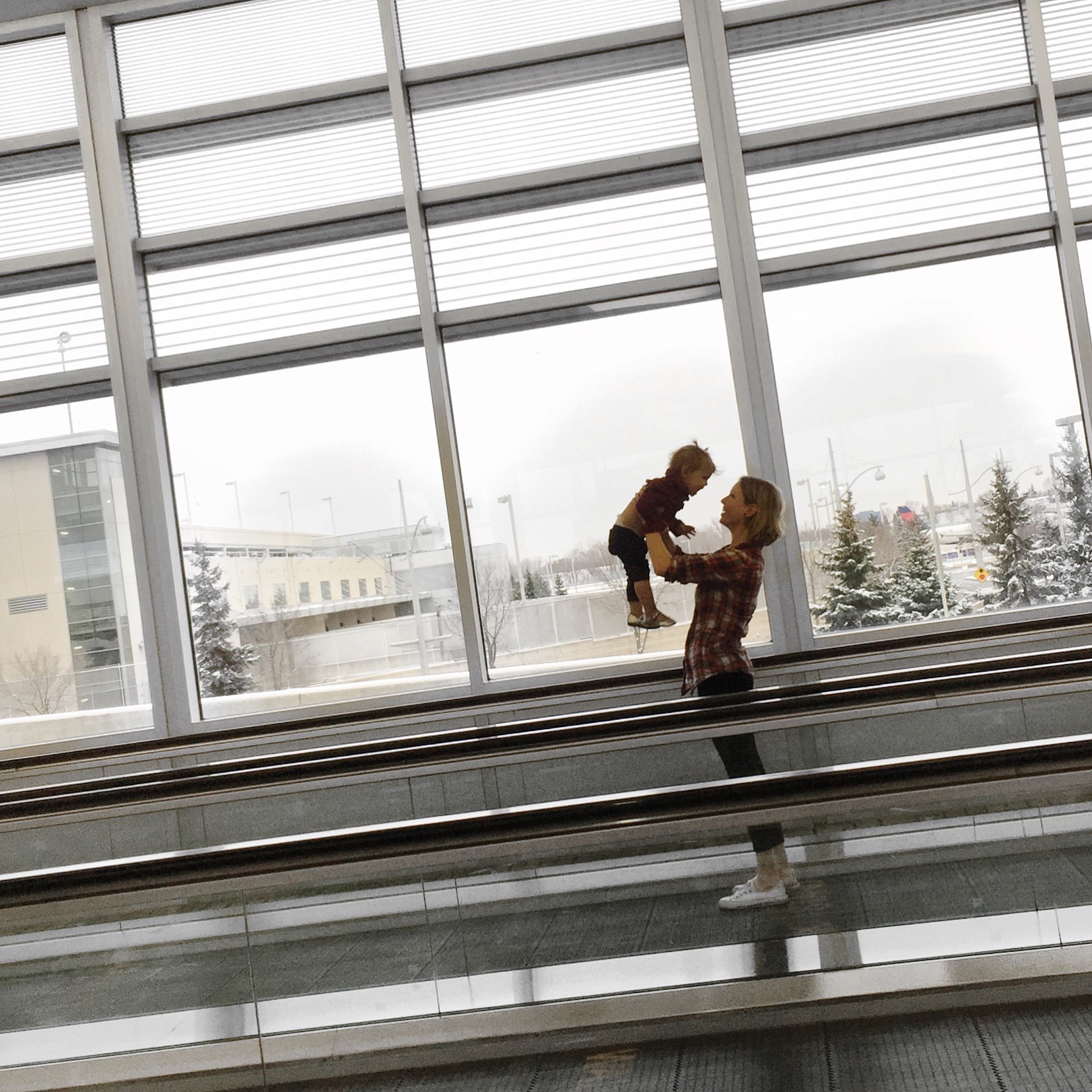