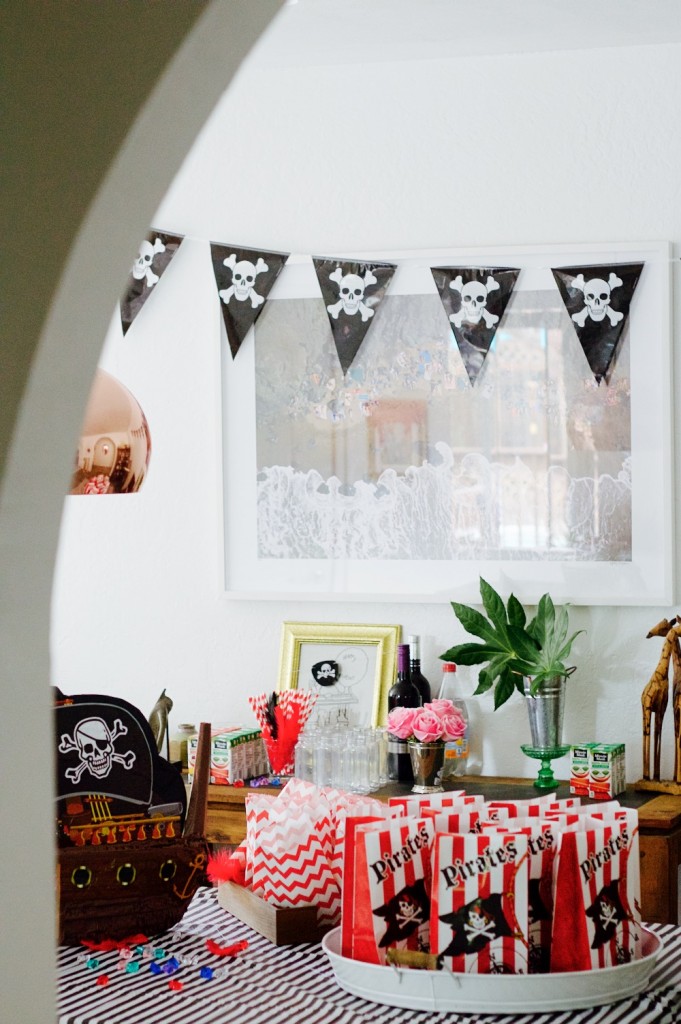 Alright, so I went into this birthday a little nervous. Because talk about a high bar; Goldie’s party in August was silly-fancy. (Seriously: as much as I loved it, it was obbbbbviously a bit much for a one-year-old, and I felt the need to explain to our guests – many of whom haven’t known me for long enough to be aware that my children’s parties have historically included pathetically lopsided cakes rather than expertly crafted mini-bundts – that I was responsible for exactly none of it). Despite my awareness that what kids need to be happy is the permission to eat ice cream and run around like lunatics (and really not a whole lot else), I wanted to make sure that Indy’s fourth birthday (!! cannot stand it) felt special, too…while still being manageable to plan and set up, because we just wrapped up a whole lot of travel and are more than a little busy at the moment.

We came up with the pirate theme (which I later adjusted slightly into a Goonies theme just because everybody loves that movie, Indy included – even if he doesn’t know it yet) largely based on the fact that Indy bought a pirate sword at the Renaissance Faire we went to a few weeks ago. Slightly random or no, it ended up being a really cool theme, and the party was easy to organize (whew), relatively inexpensive (win), and fun for both kids and their parents (double win).

The Food: Oh, Trader Joe’s, I love you so much. I bought literally everything (mac and cheese balls, a selection of pizzas, lemon squares, brownie bites, and pumpkin cookies) from the store and just heated up whatever needed heating half an hour before our guests arrived. For the cake, Indy decided that he wanted a Ladybug cake (go figure). Fine by me; Baskin Robbins does ladybugs very nicely.

We also set up a small bar area with wine, beer and sodas for the adults and juice boxes for the kids, and decorated it with faux gemstones and glam | camp’s Happy Birthday embroidery…accessorized with an eyepatch, of course.

The Decor: A couple of weeks before the party, I ordered a pirate banner, plastic gemstones, red and black feathers, red-striped straws, a black-and-white striped tablecloth, red chevron popcorn bags, and red polka-dot candy cups off of the Internet. I set out the food and sweets on white cake plates and trays that I already had, and arranged the whole thing around the pirate ship piñata (which served as the centerpiece until we were ready to whack it). For a little color, I scattered around oversize green (vaguely tropical) leaves in metal canisters that we saved from our wedding and that have come in handy countless times over the years.

The Attire: Kendrick finally, finally received my permission to wear the aggressively ugly 1960s blue silk poet’s blouse that he inherited from my father. Indy wore his pirate swim shirt because it’s his favorite thing. Goldie wore a dress that had ruffles, and was thus (very) vaguely pirate-ish. I wore this.

The Activities: The (super small, because our backyard is pretty tiny) bouncy castle we rented was obviously the primary source of entertainment, but we also had a vaguely creepy pin-the-eye-on-the-pirate game and the aforementioned pirate ship piñata. And then, after about four hours of solid motion, the children were done and the parents were even more done, and that’s when It’s The Great Pumpkin, Charlie Brown went on, to virtually everyone’s relief.

The Favors: We filled inexpensive favor bags I found on Amazon with gemstones, temporary pirate tattoos, pirate eye patches, and rubber pirate rings (and the piñata candy, of course).

Shots from the festivities, below. 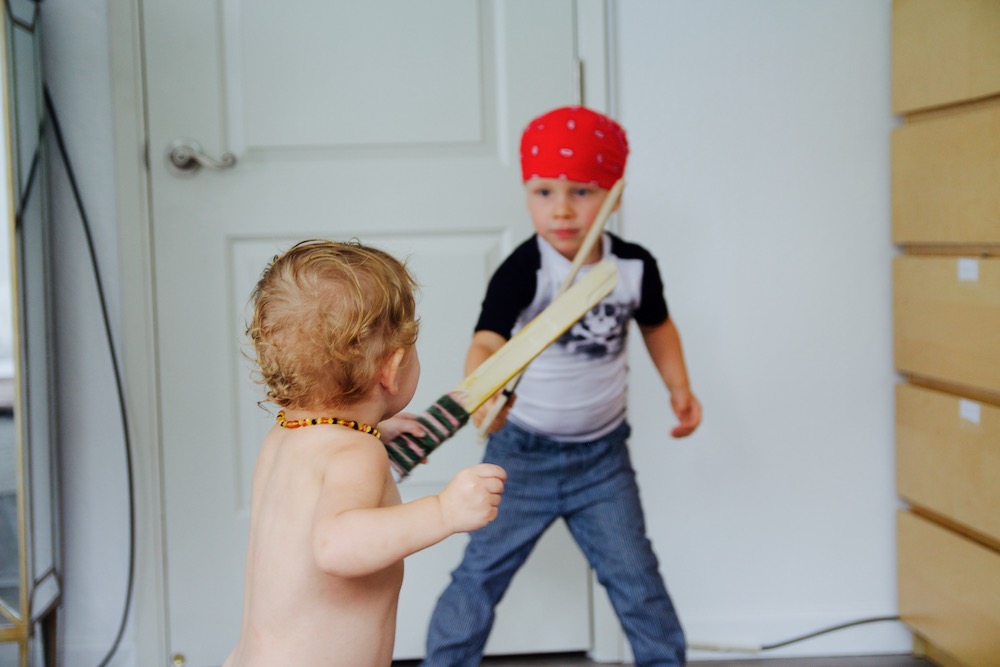 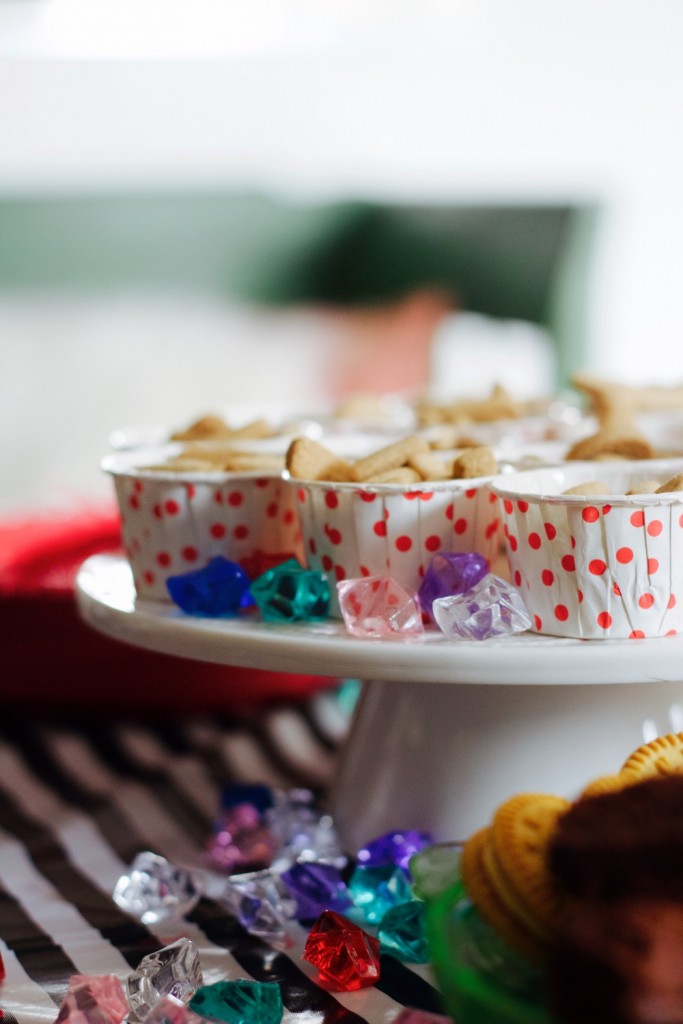 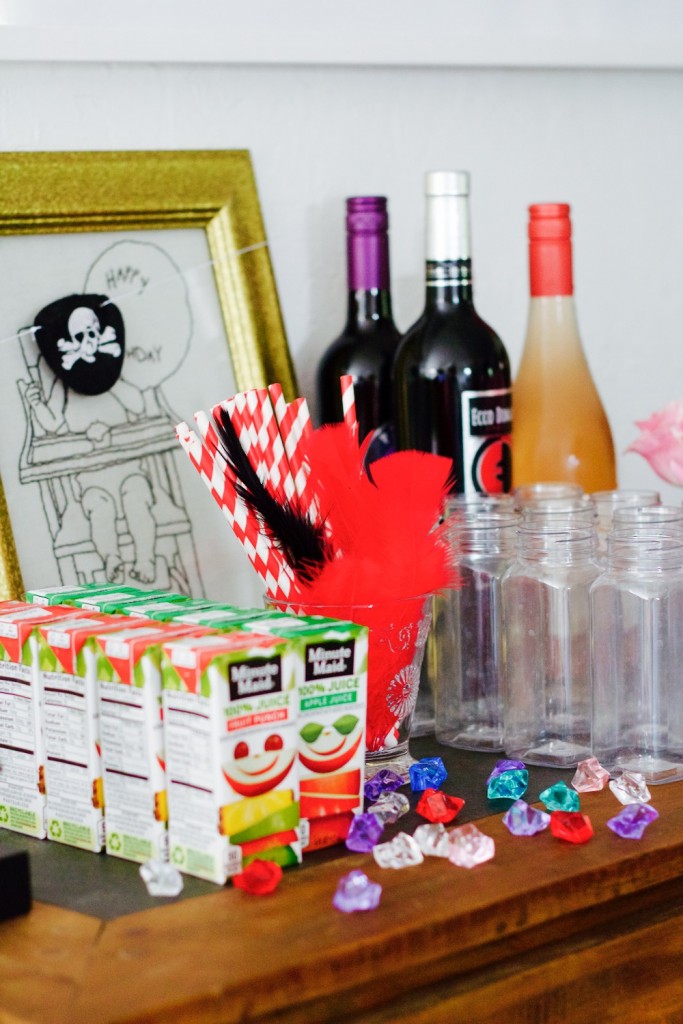 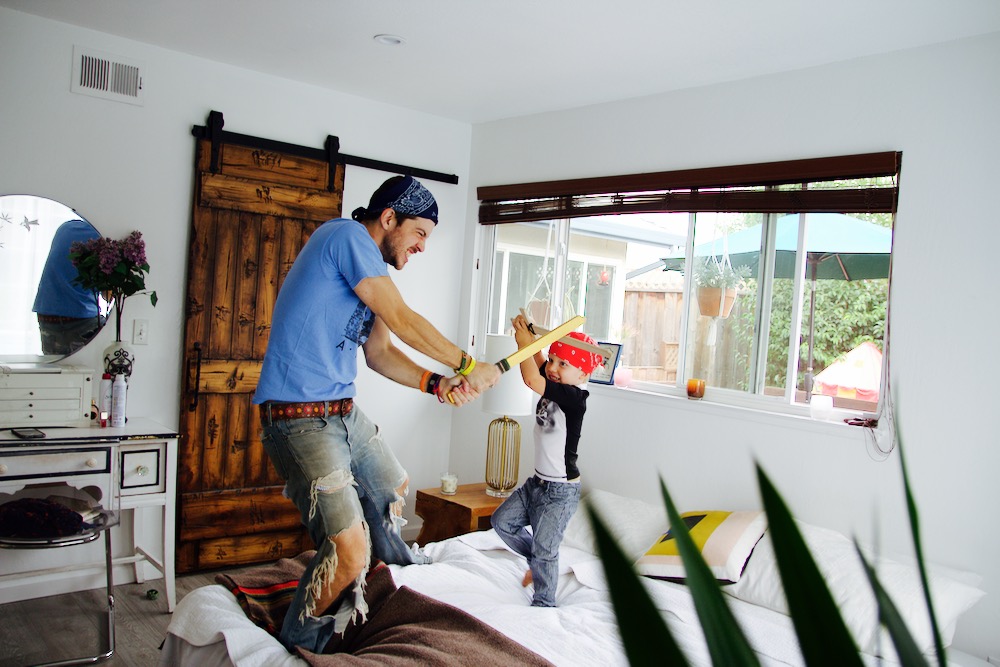 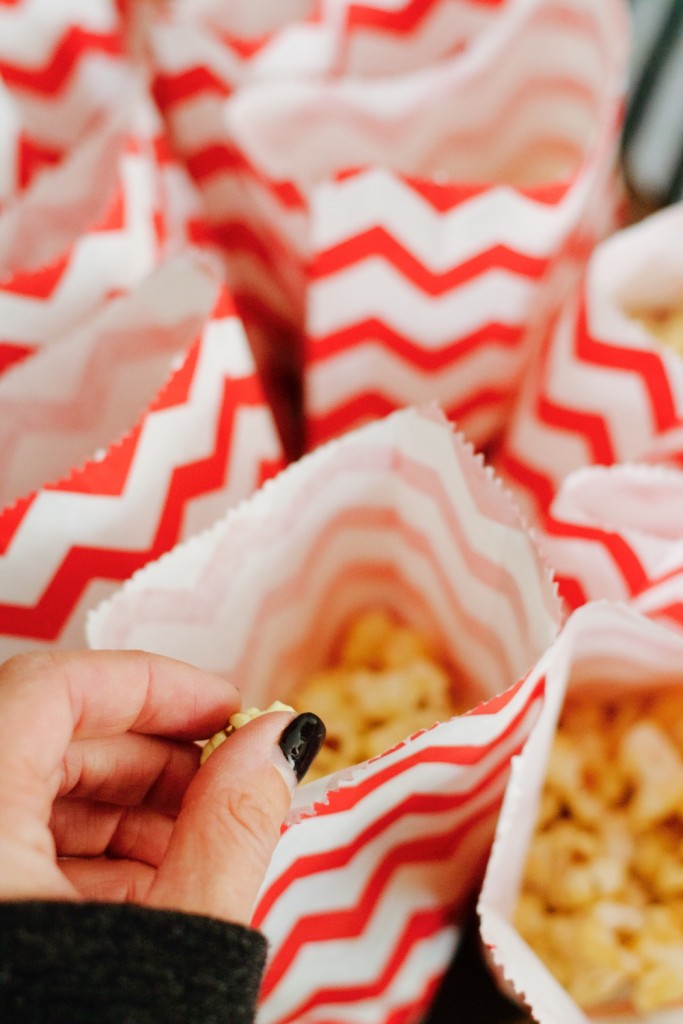 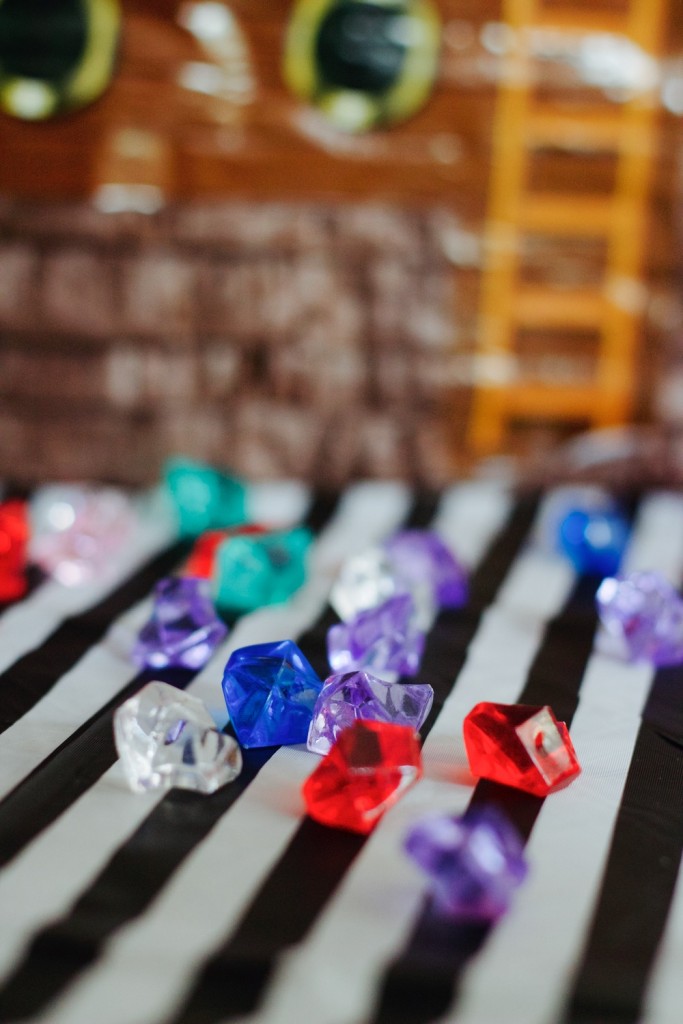 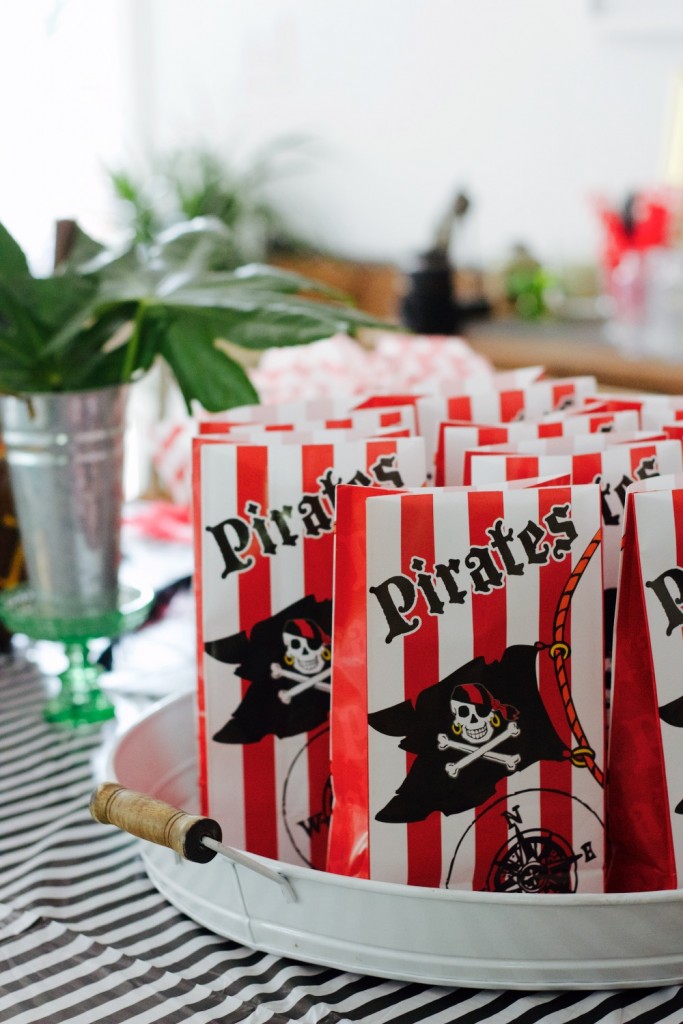 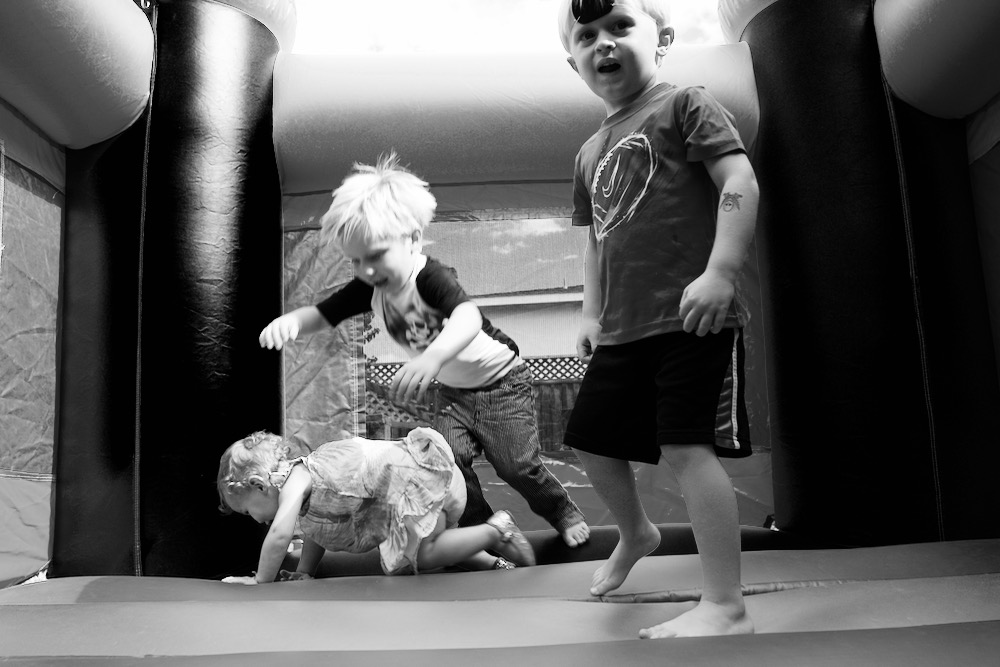 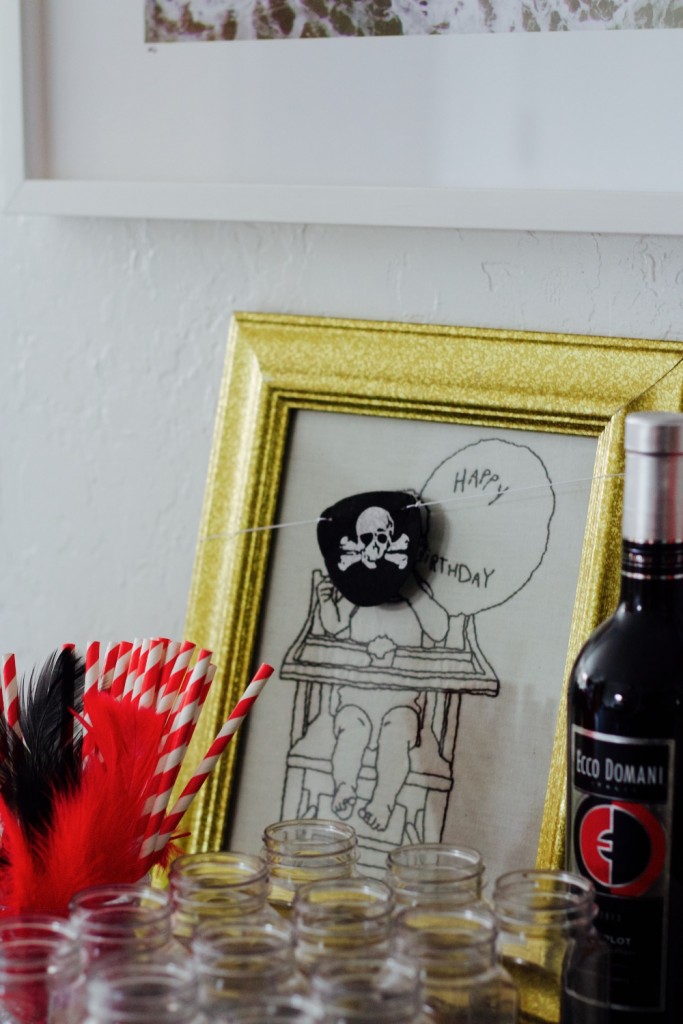 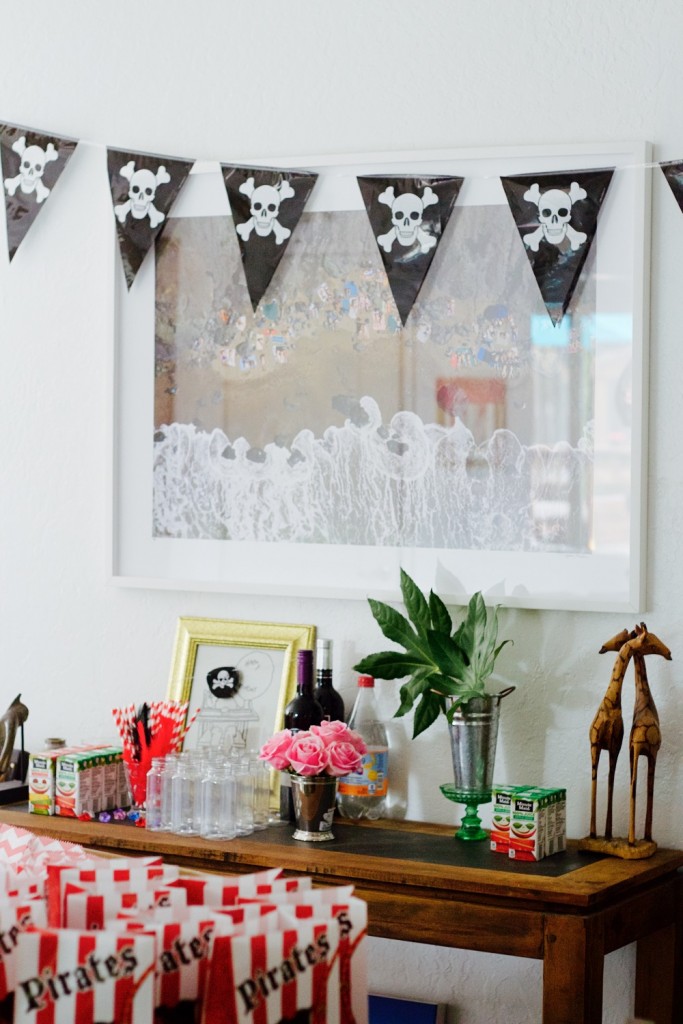 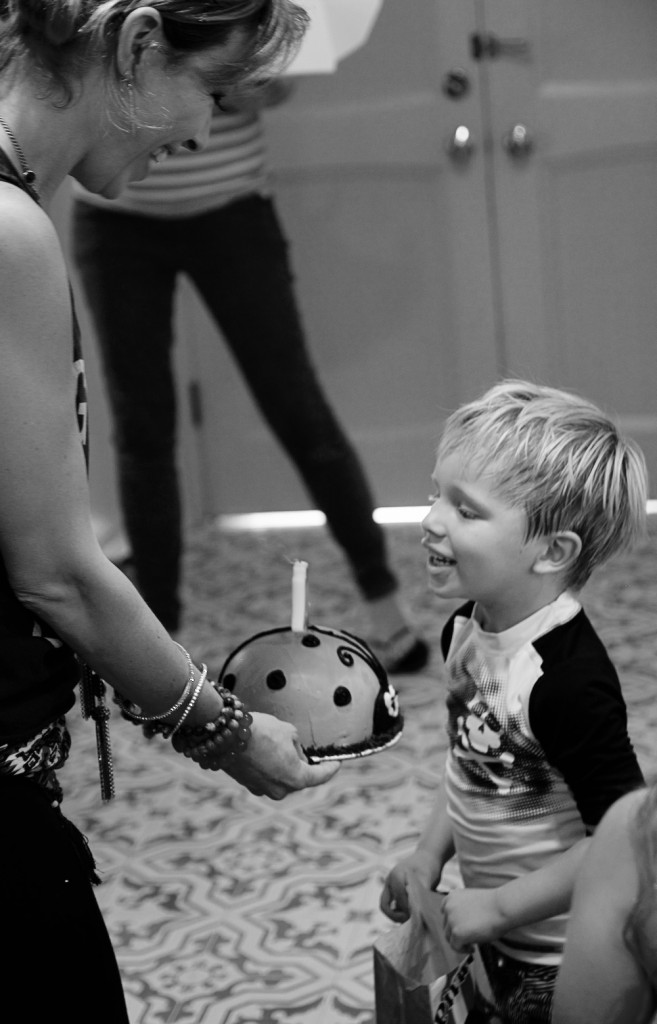 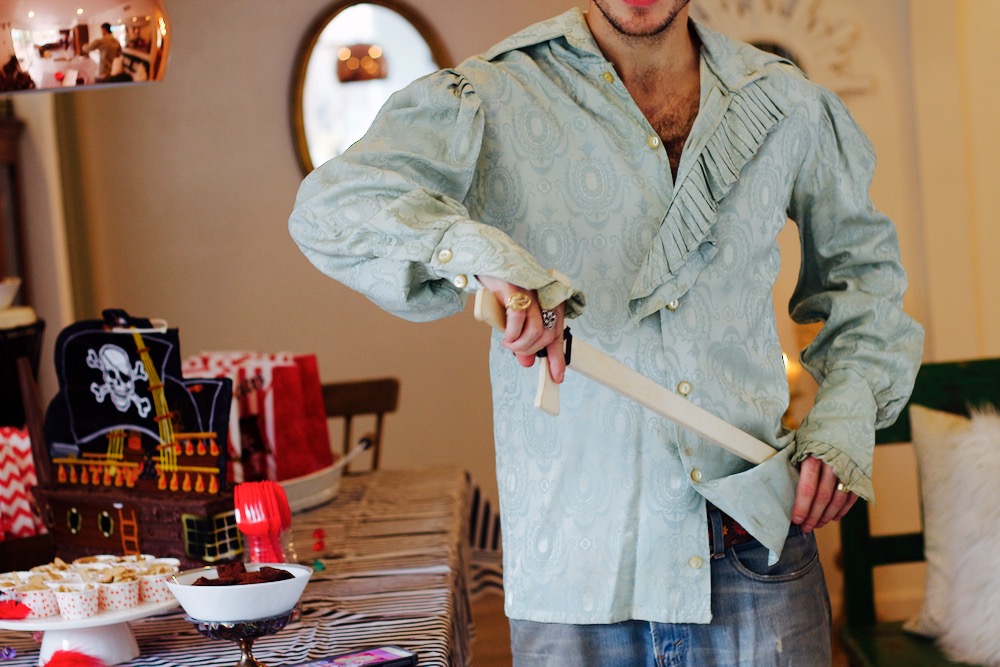 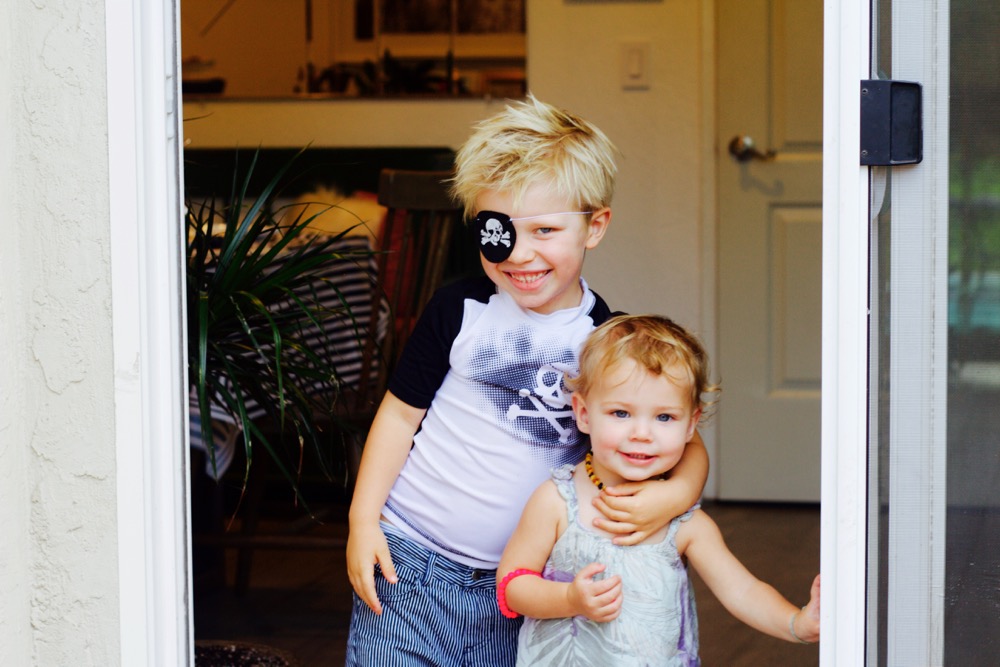 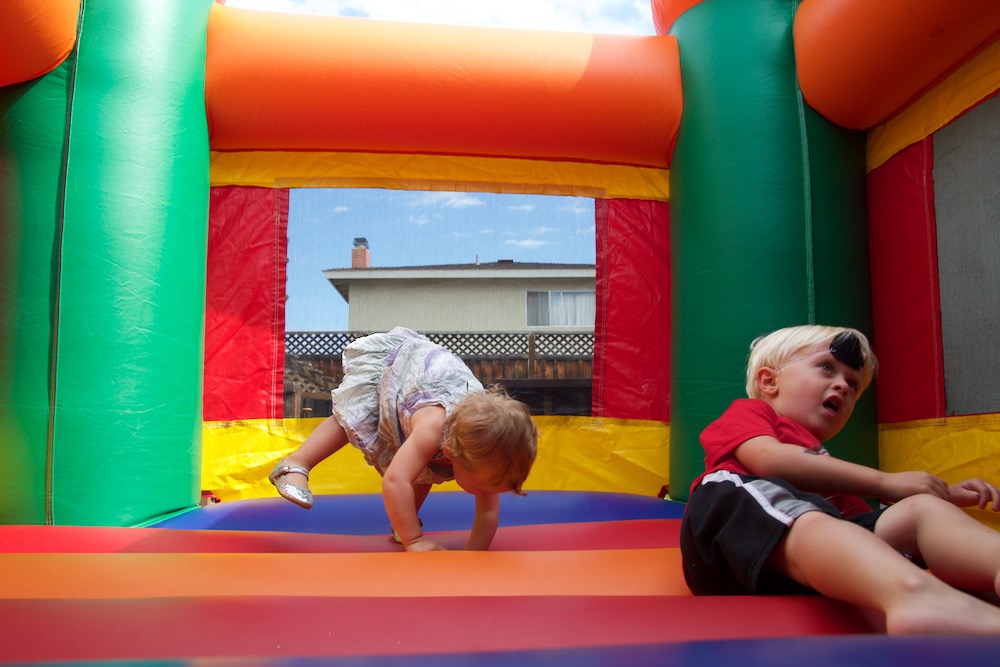 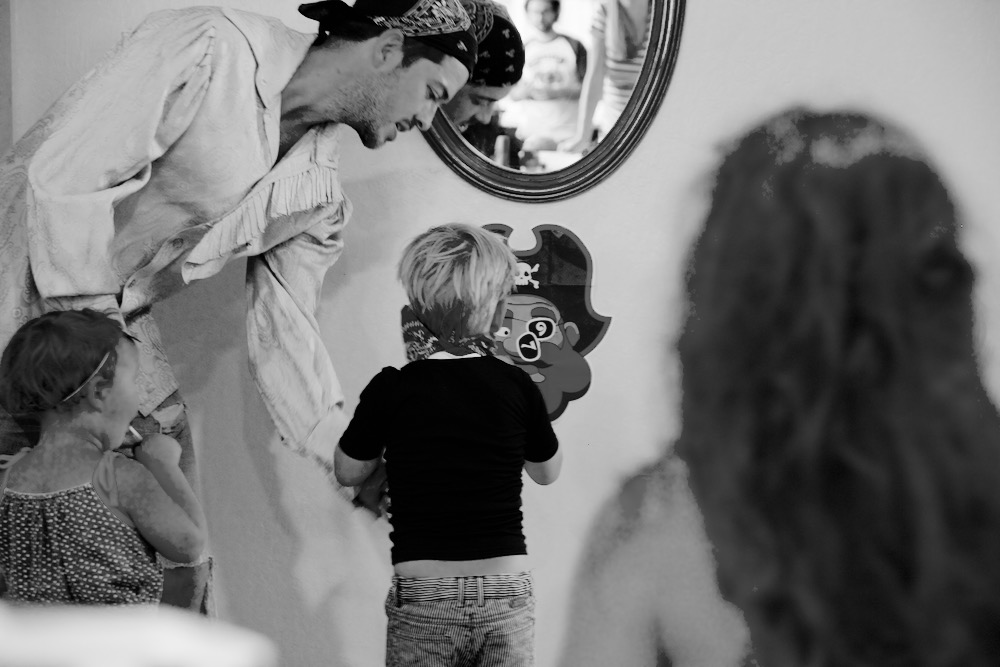 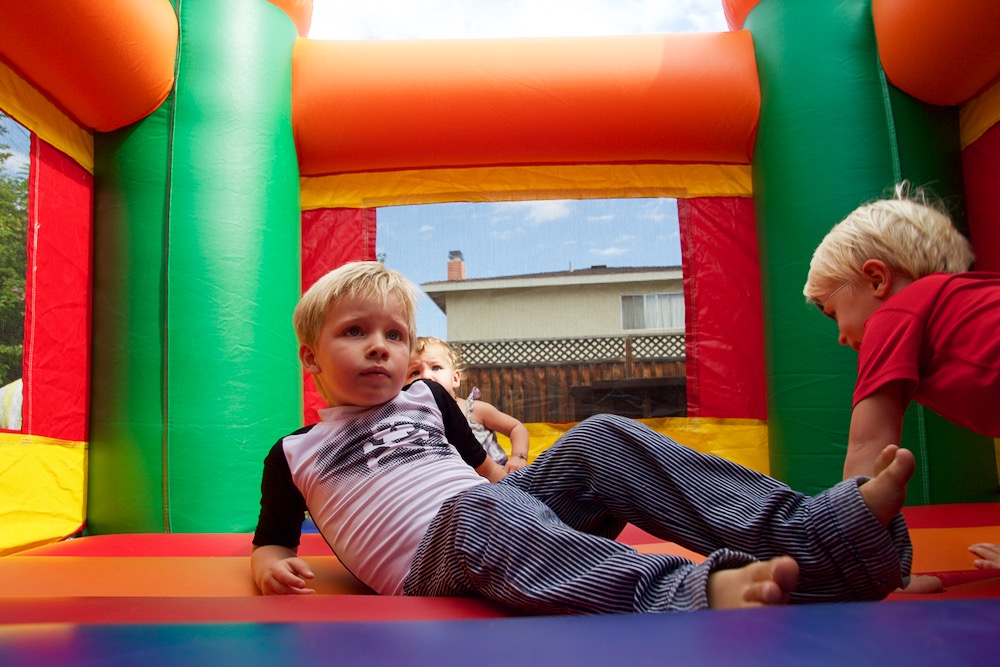 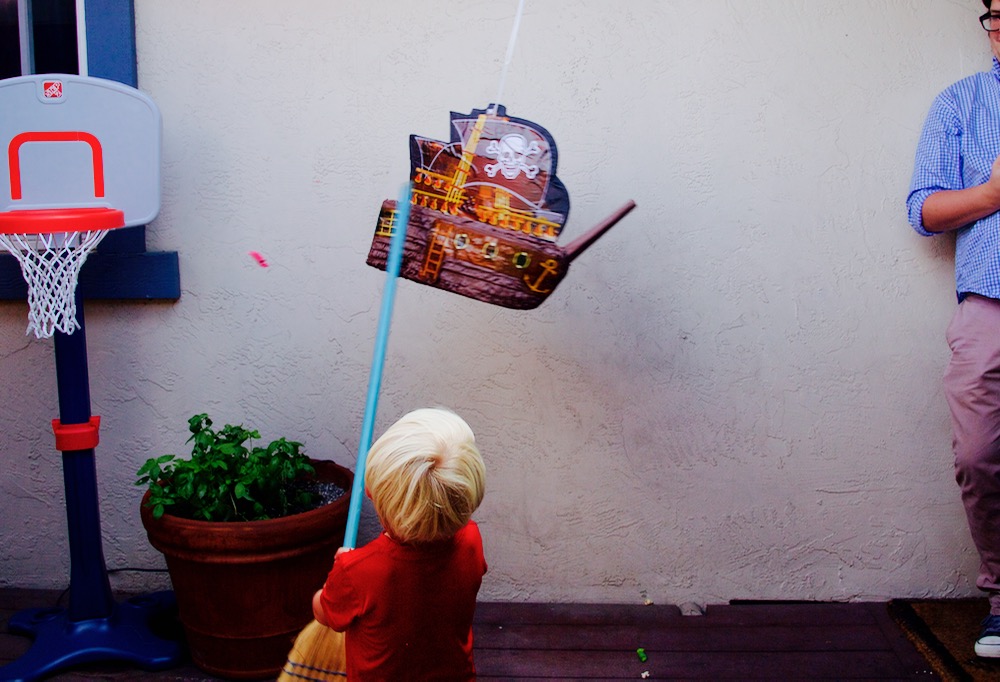 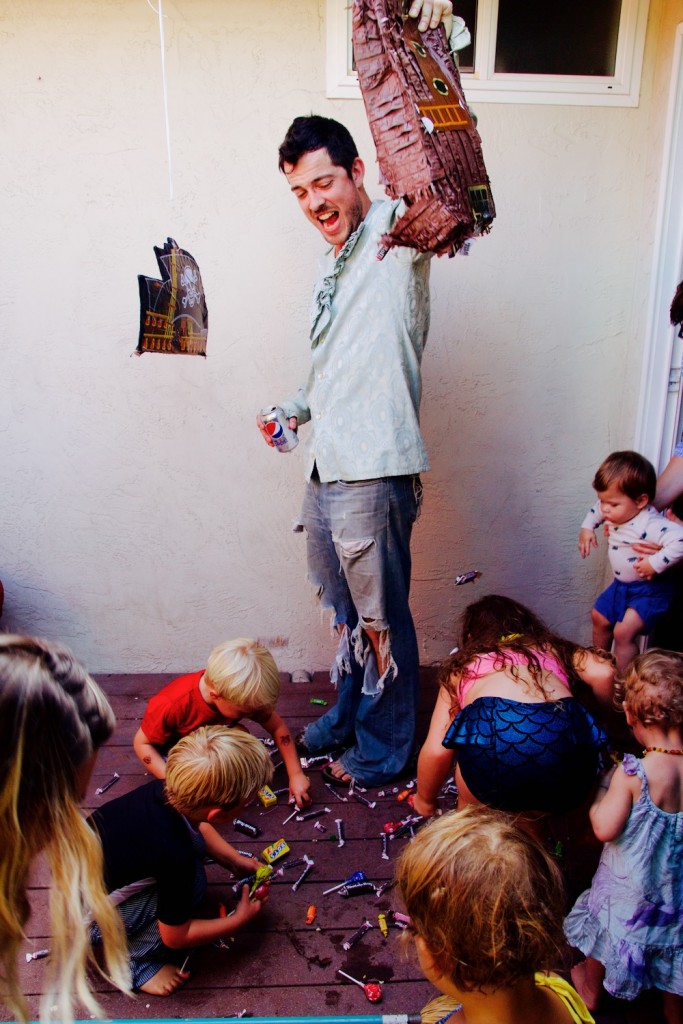