On Second-Time Motherhood And Still Being A Mess 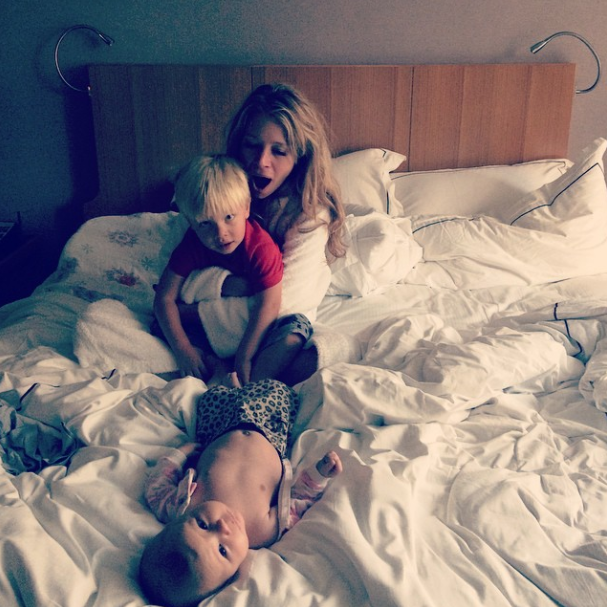 Lately I just feel sort of…blah. I haven’t exercised regularly (other than Mudderella and a forced stop into a boot camp class) in years. My nails may look worse than they have ever looked in the history of me. What I eat prior to the hour of 5PM (when I place a series of delicious things on the table largely out of a sense of guilt) is usually whatever fell off my child’s high chair, and then at midnight I suddenly get ravenously hungry and consume things like Hostess cupcakes and string cheese and these gelatinous strawberry-flavored things that Kendrick brought home from the office, all at the same time. Last night I inhaled three massive neon-colored popsicles while fully prone and staring at reality TV shows, and while my husband looked on in horror at the popsicle-eating, fuzzy-legged thing that used to be his wife.

I need a haircut. I need highlights. I need a nap.

I was talking to Morgan about this the other day – this sort of general I-feel-like-crap-ness. As the parent of two children born eighteen months apart, she’s something of an expert on the topic of exhaustion, and when I was done whining she said, “Of COURSE you feel that way. You’re still in the middle of it.”

She was referring, of course, to the middle of new parenthood (I guess you could call me Newish). See, the thing is that Goldie isn’t my first time on this particular merry-go-round, and she’s also such a weird-easy baby – happy, unfussy, sleeping, eating, et cetera – that I feel like I’m not allowed to have the normal I-recently-birthed-a-child complaints. In short: my daughter is basically a training baby that they should use to convince parents-to-be that everything will be okay, so shouldn’t I be floating along, all whooooo this is so eaaaasy? Especially since I know how seriously much harder it can be (ahem, #firstbabyproblems)?

Except it doesn’t feel easy at all. She does…but life doesn’t.

It’s not anything specific; it’s mostly just the fact that I still haven’t gotten myself back into anything approximating a long-term workable routine. I’m still waking up for one crying child or another several times a night. I’m freaked out about work virtually one hundred percent of the time, because the day needs to grow more hours if I’m going to get everything done. I have literally no idea how I would possibly make time to go to the gym, especially when I don’t have time to do things I actually want to make time for, like watch entire Bachelor In Paradise episodes without having to leave the rest for tomorrow because cannotkeepeyesopen.

Interact with my husband?

We went on a date a couple of weeks ago, because it was our anniversary. Other than that, our “dates” for the past few months have involved a couch, a bottle of Charles Shaw, and half of a movie (at which point I pass out; can you say “sexy”?).

And this is exactly what Morgan was talking about. “You’ll see,” she said. “It gets better at the year-and-a-half mark. All of a sudden you start being able to sleep, to eat normally, to exercise, to go out with friends, to go on dates with your husband. You start feeling like a person again.”

I know she’s right, because I’ve done this before. But it still sounds impossible from where I’m standing.

Here’s the thing: when you are a new-new mom of your first child, you get to be a disaster. Everyone expects you to be a disaster, including yourself. As a second-timer, though, you don’t get to collapse, or be a mess, because guess what? There’s someone right there who DGAF if you’re tired and don’t feel like making pasta with butter; he would like it now thanks and when you’re done could you please read Llama Llama Mad At Mama twelve times in a row?

Except even if you “don’t get to be a mess”? You still are.

On the bright side, here’s something I’ve learned: admitting that you feel like shit can go a long way towards making you feel less like shit again one day.

I started this post planning to write about how kind of nonsensical that outfit pictured below is – autumn pants, summer tank, cold-weather hat, warm-weather sunglasses, gold heels, et cetera. It was going to just be a “here’s what I’m wearing lately isn’t it kind of weird ha ha?” fashion post. But then I realized that what I really want to talk about is that I’m a mess. Still. And then I realized that the reason these outfit shots made me think of being a mess is that my general loopiness has extended into every part of my life, up to and including my approach to putting clothing on my body. Because while I’d like to feel more pulled-together in general, the effect that my scattered, tired, vaguely (oh let’s just say it) pissy mood has had on my wardrobe has been kind of fun.

Basically – like my son when he’s in the mood for pasta and I’m in the mood for sitting down and not cooking – IDGAF. And so I think I’ll wear exactly what I like, thanks.

Get me some more coffee, and then maybe we’ll talk. 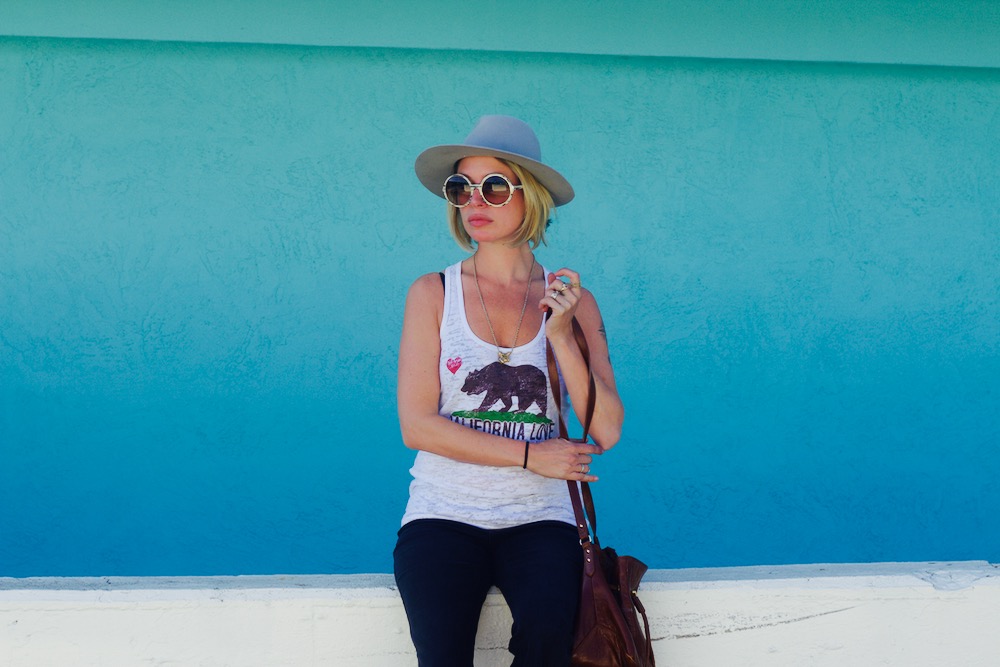 Me, looking pissy in Santa Cruz. 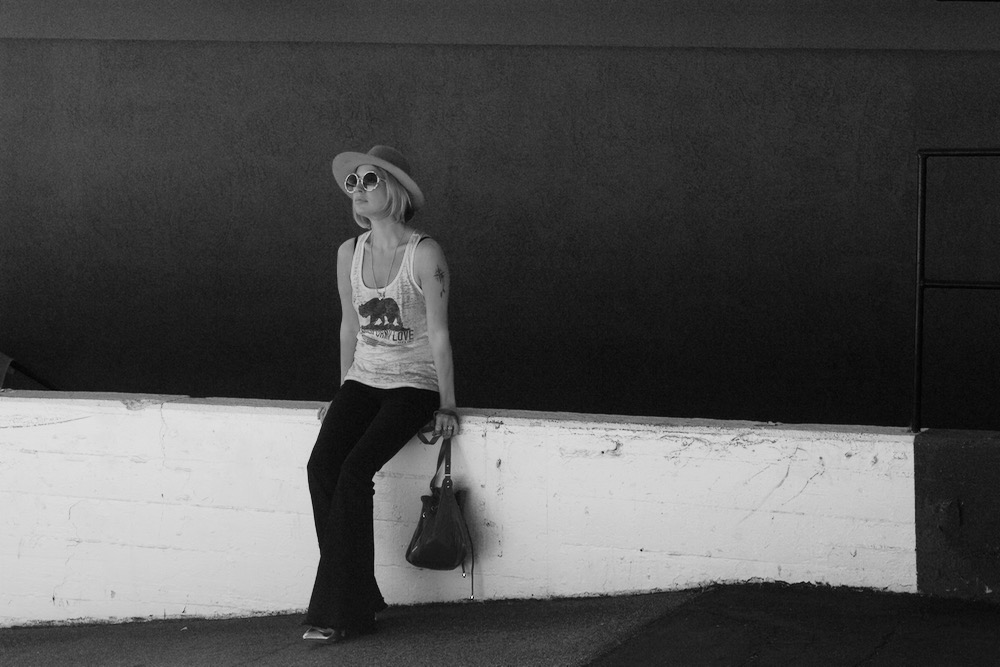 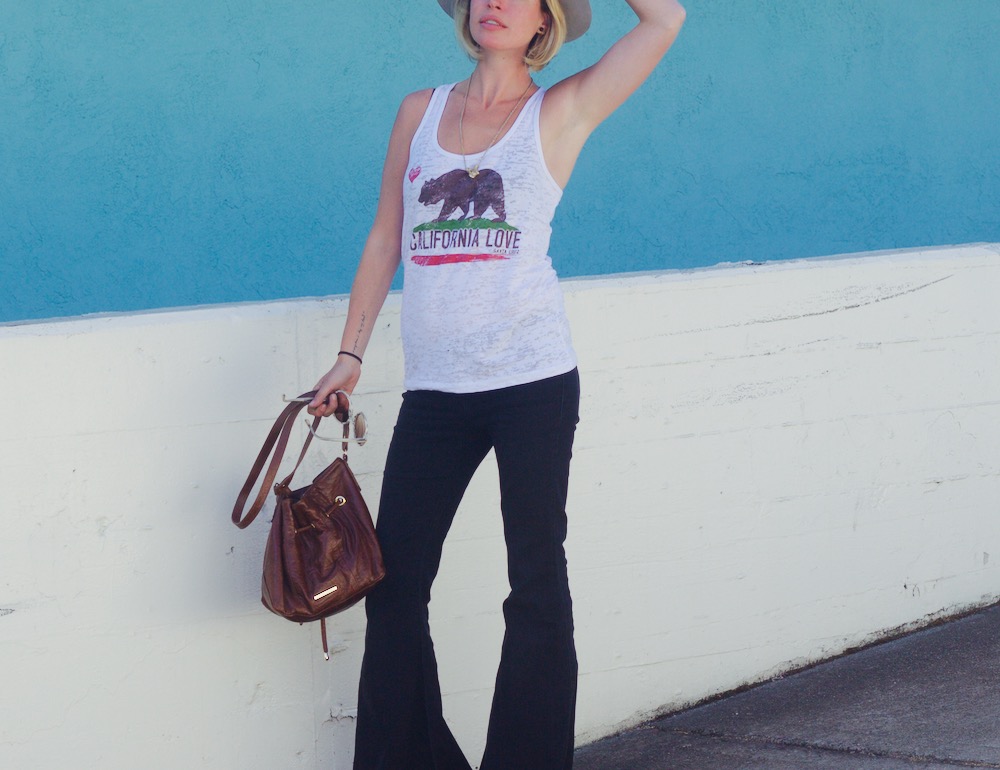 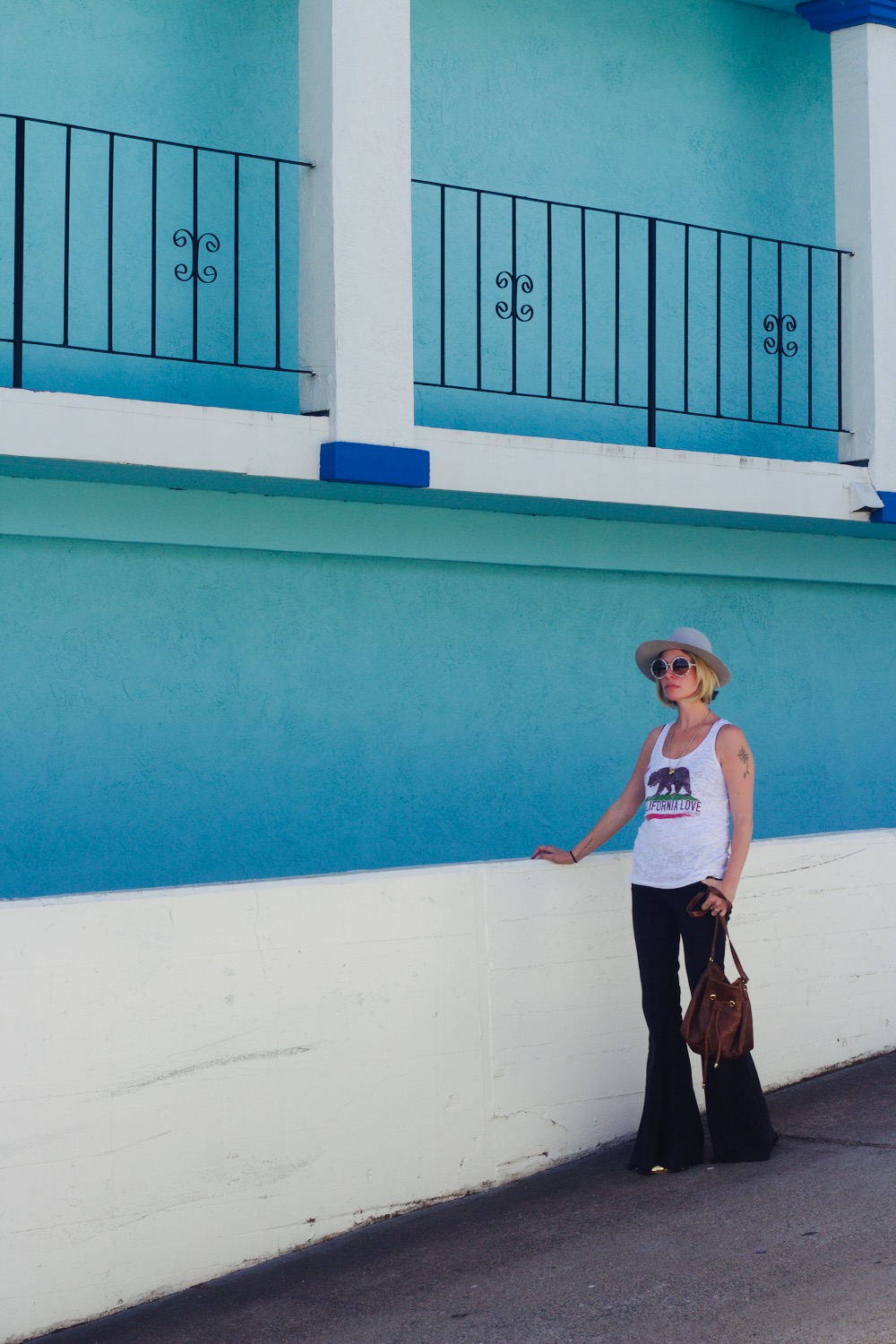 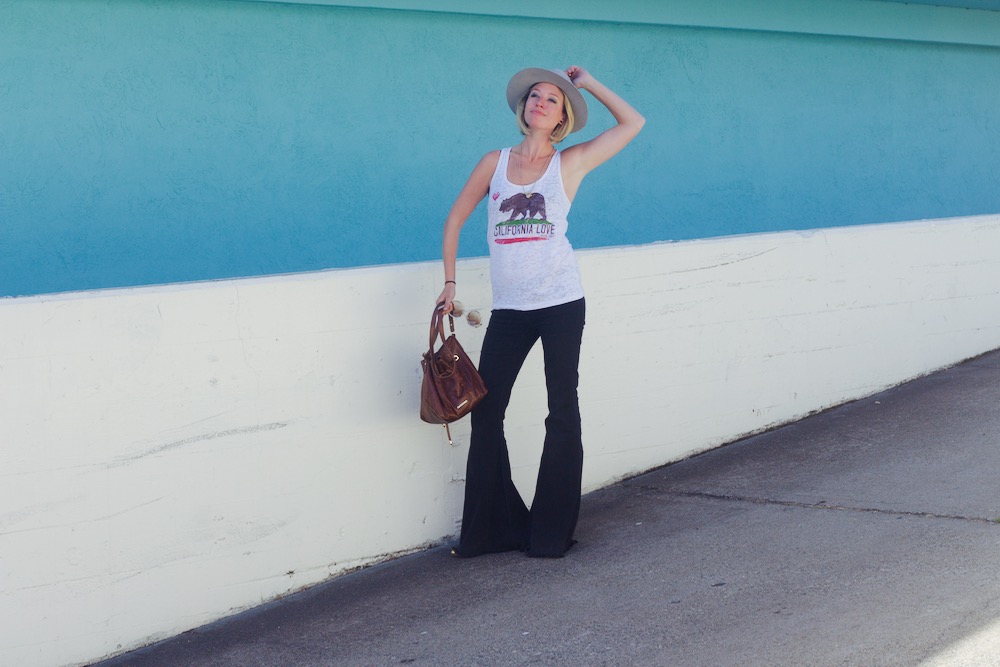