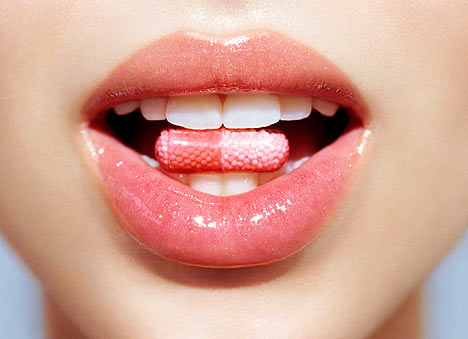 I wrote a few weeks ago how, in the days following Goldie’s birth – when I feared a relapse of the postpartum depression that I’d suffered from after Indy arrived – I was prescribed a low-dose medication to combat the chronic insomnia and anxiety that I’ve been dealing with for a good decade (and hopefully make PPD more unlikely). It’s been two months, and I figure now is as good of a time as any to write about how it’s been going.

Growing up, my parents taught me that no one would handle my problems for me; it was on me to face them, and then fix them. If I had an issue with a teacher, a fight with a friend, an essay that I just couldn’t seem to get right, they were there to listen and offer suggestions, of course, but they were not going to storm the gates and take over; finding a solution was my job. And I’m grateful for that.

A strange byproduct of this focus on self-reliance, though, is the fact that my family – myself included, as it turns out – doesn’t really believe in medication. Tylenol for a headache, Lipitor for cholesterol, sure…but drugs for the mind? Nope. Maybe it’s a generational thing; maybe it’s pride; maybe it’s a reaction to the rampant overmedication going on in today’s society, but whatever it is, my family’s attitude towards psychiatric medications (and therapy in general) burrowed itself deeply into my head. So deeply that despite the fact that I like to think that I’m a generally open-minded person – and think that if something hurts, you should look for ways to fix it – I grew up believing that (barring “serious” mental disorders like schizophrenia, bipolar disorder, a.k.a. things that happen to “other people”), you do not need pills to fix your head.

You should be stronger than that.

Or at least I should be.

The strangest part: I studied cognitive neuroscience – basically, the biology underlying psychological behavior – in college, which means that I know better than this, am more educated about the very real neural mechanisms that contribute to psychological conditions than the average bear. In particular, I spent a lot of my college career studying so-called “shadow syndromes” – the milder forms of major mental disorders that plague so many of us and go untreated because they aren’t as showy as their more dramatic cousins – and I know that these syndromes are real, and cause real problems in people’s lives. I know that highly effective medications have been developed to address them.

And still: part of me thought that for a “normal” person (such as myself, I suppose, although I also know better than to toss around the word “normal”) to take a pill for depression or anxiety – both issues that virtually everyone deals with – was…lazy. “The easy way out.”

“I’m smart,” I thought. “I’m self-aware. I studied cognitive neuroscience, for God’s sake. I can handle a little anxiety.”

I was wrong, both about the fact that my anxiety was “little” and about the fact that I could tackle it with my own bare hands, but it took me a good ten years to figure this out. And what finally did the trick was admitting to myself once and for all that what I was experiencing was way, way off the spectrum of what can be considered “normal” (because, of course, some degree of anxiety is not only unavoidable; it’s actually beneficial, helping us run away from bears we encounter in the woods and such). My anxiety, I finally came to understand, was pathological: it disrupted my sleep, my relationships, my life. It wasn’t something that I should – or could – just “deal with.”

I guess I finally just got sick of feeling this way.

I’ve been hesitant to address this subject because (deeply-ingrained biases stemming from childhood and nervousness about sharing something this personal aside), I really do think that over-medication is a real issue in our society, and the last thing I want is to contribute to that problem. I do not want to say “medication is the answer.” It isn’t always the answer. But – and this is a huge “but” – the turnaround that I’ve experienced over these past few weeks has been extreme enough that I now feel comfortable saying that my decision to finally try medication is one of the best decisions that I have ever made in my life. That’s not an exaggeration.

What was I so afraid of? I suppose I was afraid that I would feel “drugged,” that the medication would dull my feelings and my emotions and leave me something other than myself. I was terrified that my children would grow up with a shell of a mother, looking out at the world with glassy eyes that never quite saw them. Dramatic, maybe, but that’s what I pictured. But what I’ve experienced is no dulling of the emotions at all – I’d describe it, rather, as a sharpening of reality, because in these past few weeks the noise of “what-if” has been replaced by the solid steadiness of what is.

I am still stressed. I am still worried. I still get frustrated with my children, angry at my husband. But I am not overwhelmed by these feelings. They feel, for the first time in as long as I can remember, ordinary. Like rational responses to the world around me.

My worries used to scream so loudly inside my head that I couldn’t hear anything else – certainly not anything approaching logic – but now, for the first time in as long as I can remember, I’m able to hold a fear in my mind, turn it over and examine it, and then either deal with it or put it away in a shelf, to be explored at some later date. Far from feeling drugged, I feel clearer than I have felt in years. And the effect that this clarity has had on my life – and especially my marriage – has been nothing short of remarkable. I can worry about work, and then put aside the worry and play with my children before they go to bed. I can argue with Kendrick and explain my feelings rather than lashing out.

I was also afraid of something else, something even more frightening: that taking a pill would mean that I was altering my identity, somehow changing my label in this world from Someone Who’s Got It Under Control to Someone With Problems. But then, after I wrote the post in which I talked about my decision to explore medication, I got so many emails from readers saying that they struggled with anxiety but were fearful of the stigma of talking about it, and especially feared having others discover that they were seeking medical help…and I realized that the fact that I’m scared of that stigma, too, is exactly why I need to be open about it.

You know, I’m not saying that the perspective that I had growing up was “bad,” not at all. It taught me how to do the hard work that goes into confronting problems rather than skimming over the surface and seeking out miracles. And I think it’s even what ultimately allowed me to make this change now, to overturn a belief so deeply-rooted that it couldn’t even be shifted by years of education in the cold, hard facts about psychological disorders.

The thing is, I see now that I spent years determined to fight a battle with my bare hands instead of looking around me for other tools that I not only “could” use, but were in fact necessary. So maybe it’s not an overhaul of my belief system at all, but rather an evolution: a focus not on self-reliance to the point of “I got this” hubris, but rather on finding a solution to the problem, whatever that may be.

There is a difference between a crutch and a tool; one shoulders the burden for you, perhaps keeping you from building up the strength to carry it yourself…and the other just makes you stronger.