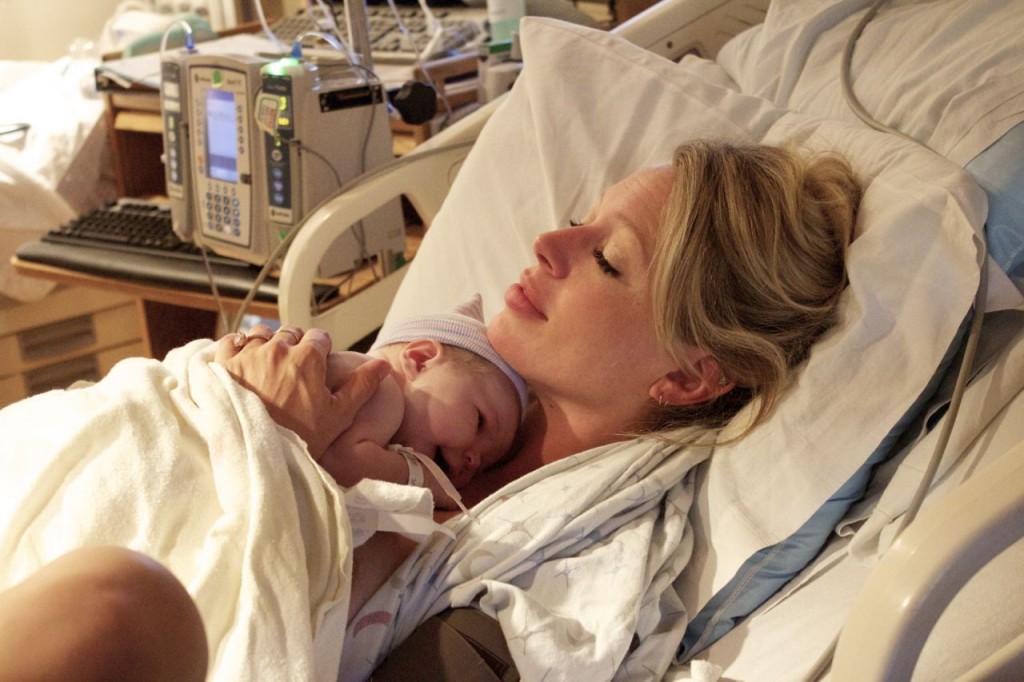 I didn’t go into this experience feeling brave.

When the nurse came into my hospital room, checked me, and said that it would be time to push soon, I started shaking so hard that my teeth clattered together. I didn’t want to do it again, didn’t want to think again that I might be dying, or that my child might be dying because I wasn’t strong enough as a person or as a mother to get her out of my body safely.

I also didn’t go into giving birth determined to have a “birth experience” like I’ve heard so many mothers-to-be talk about. I thought a birth experience was the domain of women who chose to go the all-natural route, who wrote out detailed moment-by-moment plans and wanted to involve things like baths and midwives and custom playlists and fancy breathing exercises. I thought that I just wanted to have the baby, have it hurt as little as possible, and be on my way so I could get to the real stuff of motherhood.

And then, just like that, I had a birth experience of my very own.

When I arrived at the hospital on Monday night, I told the residents and nurse who had been assigned to my room about the last time I gave birth, how my epidural had been turned off three hours before my son arrived and how my doctor had made me feel weak and ashamed and how it had hurt so much that I had thought that I had failed. “I don’t think I can do that again,” I said, and I told them I was scared. At one point, a new resident’s shift started and the doctor I’d been talking to introduced me by saying, “She had a traumatic first birth.” I started to interrupt her, “I mean, it wasn’t traumatic, I’m sure lots of people have much more difficult experiences – ” and she cut me off.

“It sounds like you were traumatized,” she told me. “That makes it traumatic. It won’t happen again.”

From that moment, I felt safe – and safer still when I realized that I could admit that I was scared. I could say it over and over again, and no one would roll their eyes or think me weak or undeserving of motherhood. I didn’t have to pretend to be tough, or not ask for more medication when I wanted it, or “suffer through” because hey, it’s giving birth and it’s “supposed” to hurt; I could voice what I needed and what I wanted and exert some small measure of control over this special beyond words moment in my life.

And once I realized that I could act as my own advocate, that’s exactly what I did. I asked for medication, I asked for more when I needed it, I asked questions throughout the delivery, and when my daughter came into the world I did feel strong, and I did feel brave, and I felt no pain at all for the ten minutes (that’s all!) that it took from start to finish…but even though I didn’t feel pain, I still felt everything.

I always felt shy around doctors, like voicing an opinion or questioning a decision was tantamount to saying that I thought I was the expert, not them. But what this taught me was that I didn’t have to go into this with a plan to have an experience; I could trust in the doctors, and still have a say. At every turn, I was given choices – this drug or that procedure, wait and see or push forward now – and I don’t know whether it was the team that helped me through the birth or my own willingness to say “I don’t know what’s best, but I’d like to have a voice” that made the difference.

But it was different.

Last time I did this, I was scared to speak; this time, I spoke through it all. I said exactly what I needed, and exactly what I wanted, and if I wasn’t sure I was allowed to ask for something I said that, too. I asked Kendrick to play music that I wanted to hear on my computer while I pushed. I asked “Is she okay?” when I knew the doctors were starting to see my daughter’s head, and I could hear them answer me because my ears weren’t filled with my own panic. I could hear the calm in their voices that told me they were speaking the truth when they said that she was. I even asked to see the placenta, because I was curious and I knew it was my only shot to check it out (verdict: interesting. Also oh my god).

Just because I made the decision to not feel pain did not mean, as I had thought it did, that I made the decision to “opt out” of the birthing process; in fact, it was because I had made that choice, because I felt safe in that moment, that I was able to be right there with my baby while she came into the world rather than desperately hoping to have her birth end. And when it did come to an end and she was laying on me, I could look at her and not feel just the absence of fear and pain, but the presence of joy.

It might sound silly to say, but the overwhelming sensation I had was that I was welcome in the room. That it was my family’s room, and my family’s time, and we could do with it what we pleased. Until that moment, I hadn’t thought I wanted a “birth experience” at all…and it turns out that I did. I just wanted one of my own.