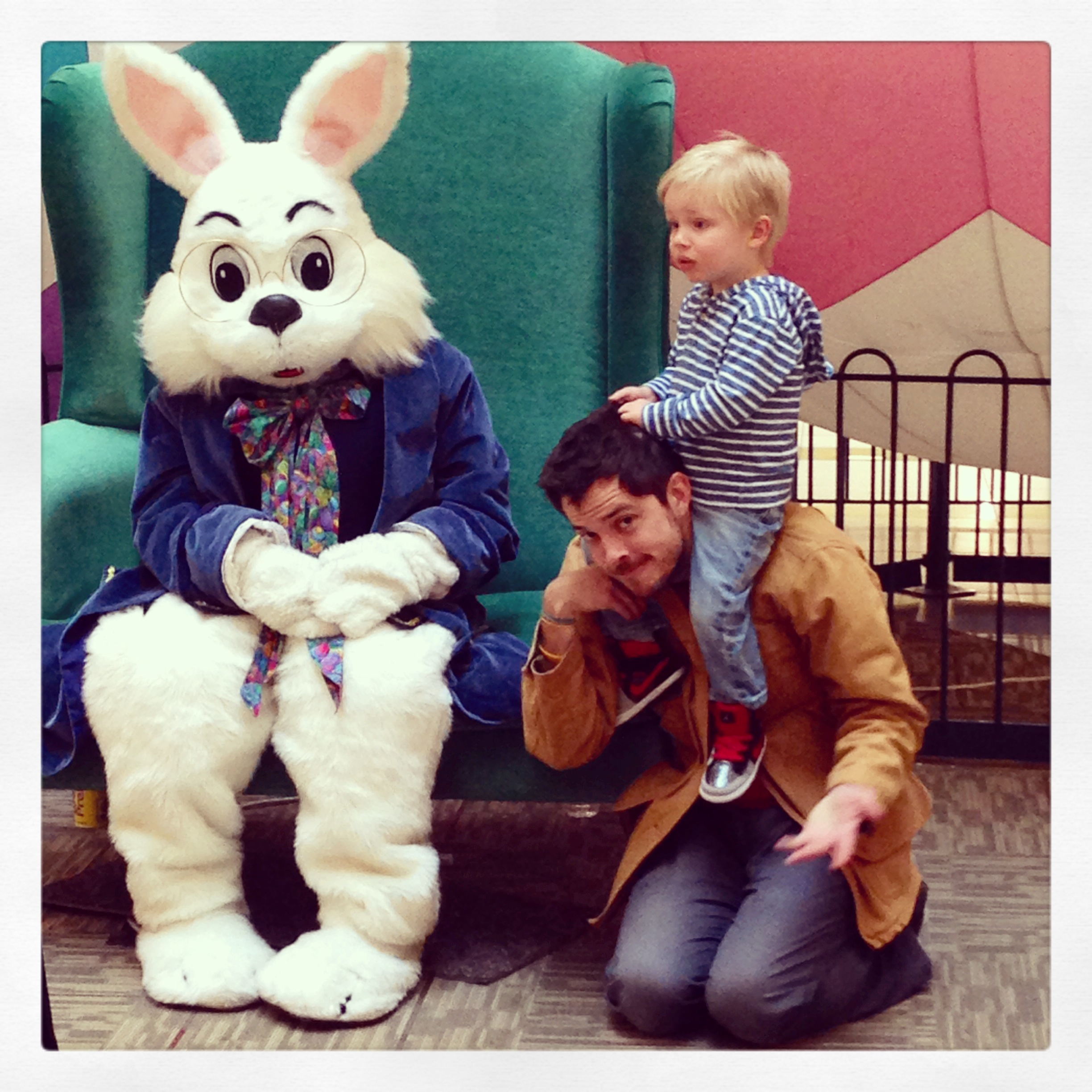 Going to the mall with a toddler is both terrible and extremely fun. It’s terrible when you do things like accidentally stay one iota of a second longer than said toddler wants to walk or be in the stroller (that’s when Dad’s Shoulders – and Grumpy Dad – come into play) and when you announce “Let’s go get an Elsa toy!” only to discover that the Disney store has experienced a catastrophic run on anything and everything Frozen-related, leaving only a sad, sad display consisting of a shirt (size 8) reading “Let It Go” and two Hans dolls. It is wonderful when you happen upon the merry-go-round, which is apparently a sight of incomparable wonder, or when you discover sushi and Coldstone and a movie theater within five feet of each other.

Seeing the Easter Bunny is somewhere in between those two extremes. On the plus side, our son was very excited and happy while waiting on line. On the minus side…

Perhaps slightly less happy once he actually got within range of what is apparently a very, very scary rabbit.

(This shot doesn’t quite rival the epic-ness that was last year’s, but I have to say: still pretty pleased with it.) 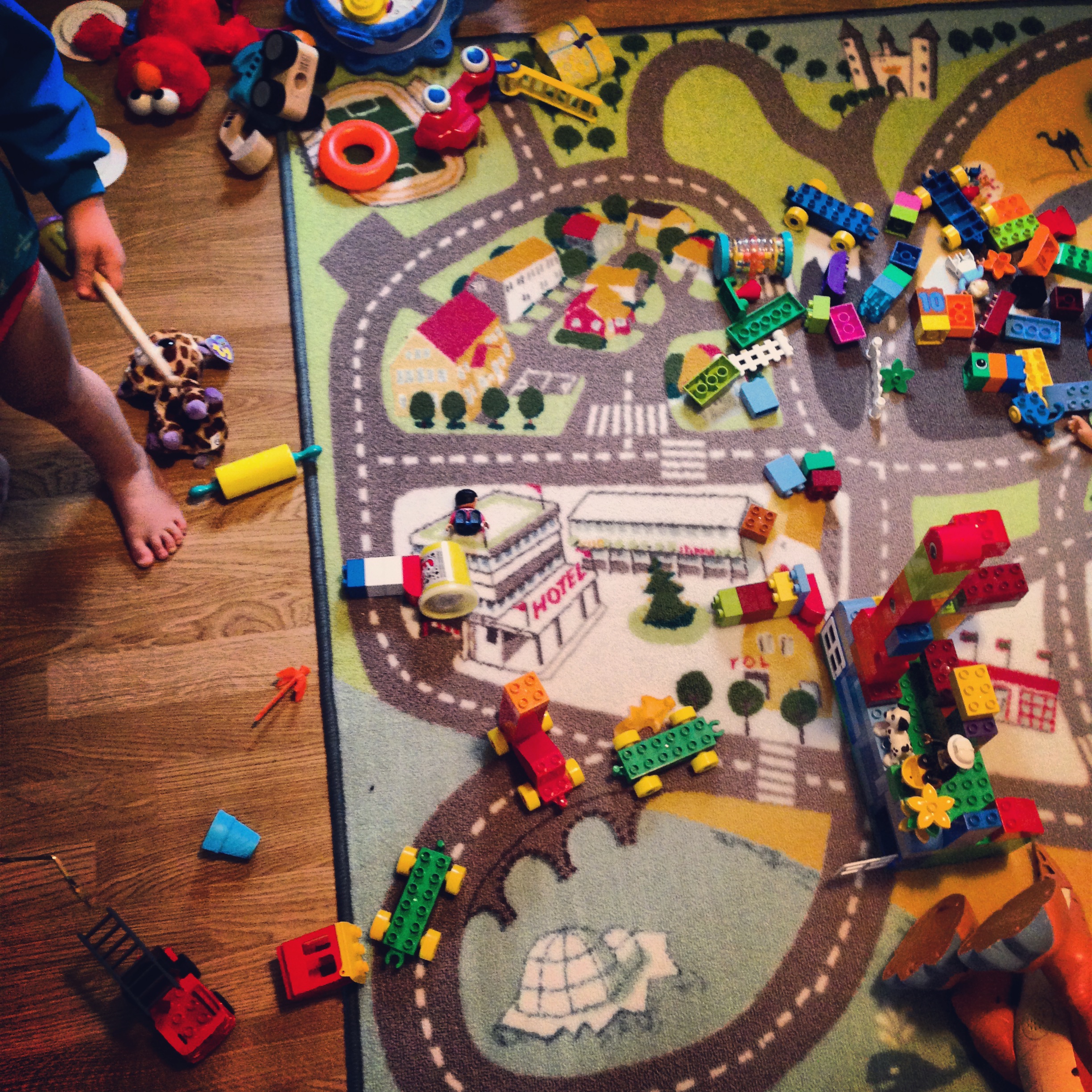 But really, this was how we spent most of the past couple of days: at home, potty training and staying entertained with Legos.

I’ve been waiting and waiting for “signs” that meant that my son was “ready” to start potty training (they – by which I mean the Internet – say that if a child wakes up with a dry diaper they’re ready, stuff like that)…but you know what ended up happening? Only a couple of the “signs” were there, but one day, in one of those psychic-mom moments that do occasionally happen (albeit less often than you wish that they would)…I just knew he was ready. There was nothing in particular that he did, but something in his general demeanor just shifted, and I woke up on Friday morning and thought: let’s just do this. Today.

Or maybe it was just because I’d gotten a decent night’s sleep, and felt marginally capable of handling what I was certain was about to be a profoundly miserable experience for all involved. Psychic-ness…or sleep. Either way, I decided it was time.

I was terrified of potty-training the way I was terrified of getting rid of my son’s (extremely beloved) pacifier; it just seemed like something that would be hugely upsetting to all involved, take forever, and result in major issues like a massively disrupted sleep schedule or something. But – just like getting rid of the pacifier (day one: kind of horrible; day two: pretty much okay; day three: forgotten entirely) – it was totally fine.

Without going too far into specifics, I basically just bought Indy some really cool underpants (cars, monsters, et cetera) and put him in them, and very quickly he realized how uncomfortable it was to not get where he needed to go in time. Lots and lots and lots of positive reinforcement, Pull-Ups for longer out-of-the-house excursions (and for nap time and bedtime), and two and a half days (and, yes, quite a few accidents) later: I’d say we’re pretty much there. And it was so much less stressful that I imagined, I can’t even tell you.

More than that: it was an oddly special bonding experience for us. He was nervous, and excited, and I could tell he felt anxious when he had an accident…and it was just so sweet how much he trusted me to tell him it was okay and that he was doing a good job.

Literally the last thing I ever thought I would call potty training is “sweet”…but it really was.

Also: it’s crazy adorable to see your child look that proud of himself.