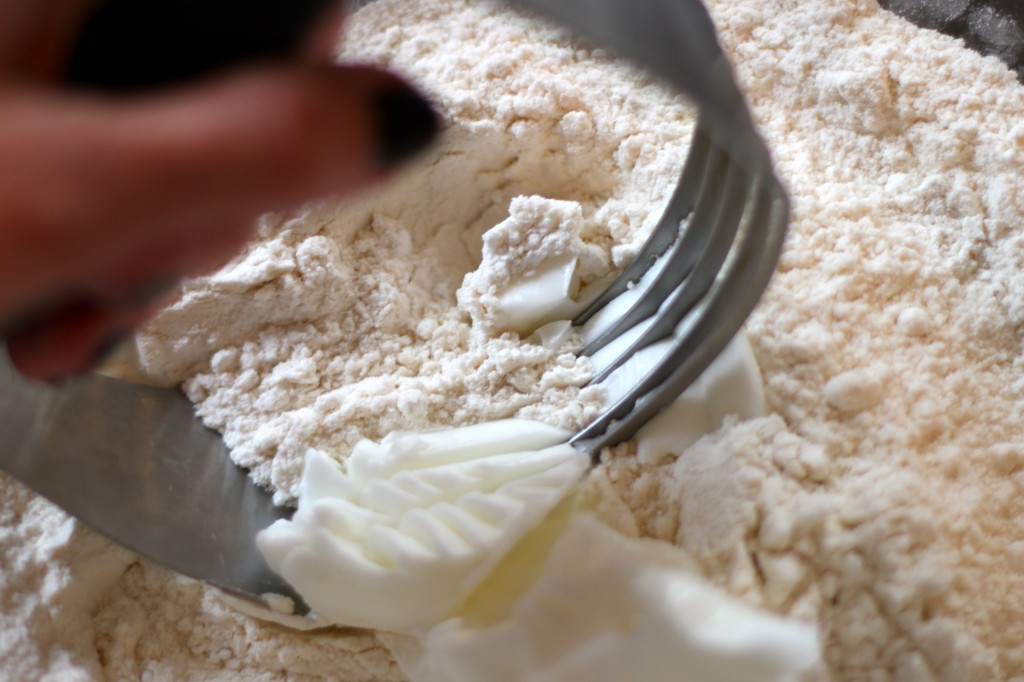 There is, at this very moment, a mad Nutella craze on Tumblr, and I have fallen victim to it. I cannot stop making Nutella Banana Bread – seriously, I can’t stop – and next up is something called Nutella Bacon (…yes).

But when I found Nutella Cinnamon Rolls, I thought they just sounded so ridiculously delicious that I had to try my own spin on them, incorporating my favorite cinnamon roll recipe and some crunchy peanut butter.

2 cups flour (plus more for sprinkling)

About half a cup of Nutella

About half a cup of crunchy peanut butter

1. First, sift the dry ingredients (flour, baking powder, and salt) into a large bowl. Add the shortening and cut it into the dough using a pastry cutter (or two knives) until pebbly. 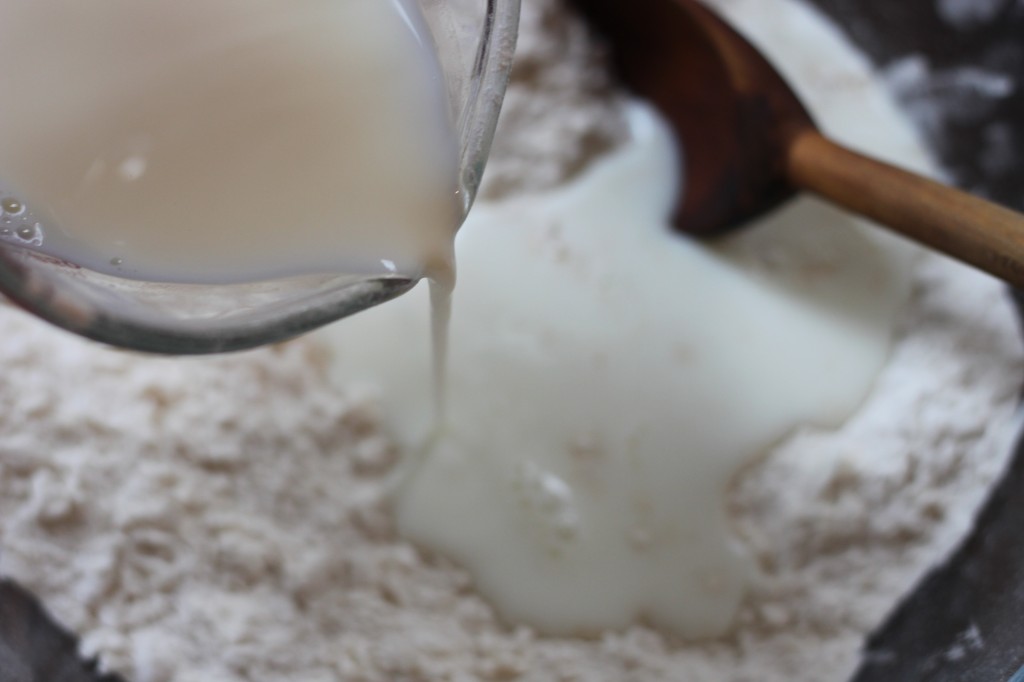 2. Pour in your milk and stir well.

3. Next, flour a surface (I set out a bit of wax paper on my countertop for reasons I’ll get to shortly, but you don’t have to) and pour out the dough. Flour your hands lightly (the dough will be a bit wet), then shape the dough into a ball and knead it 30 or so times. 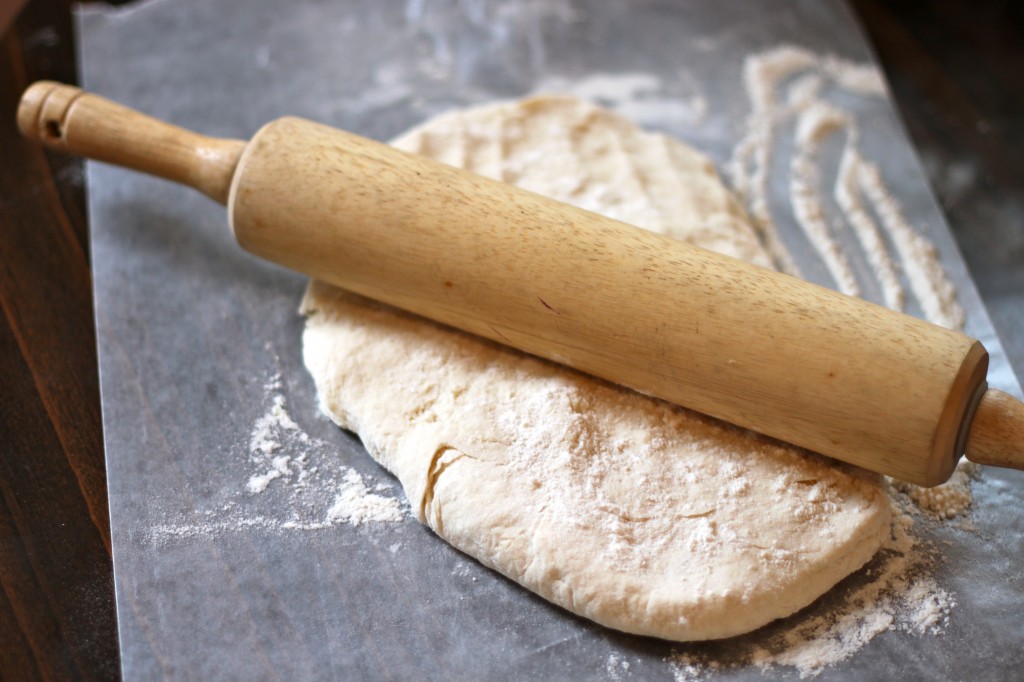 4. Pat your dough to flatten it out a bit, and sprinkle a bit more flour over the top (so the rolling pin doesn’t stick). Roll it out into an oval shape until it’s about 1/4″ thick. 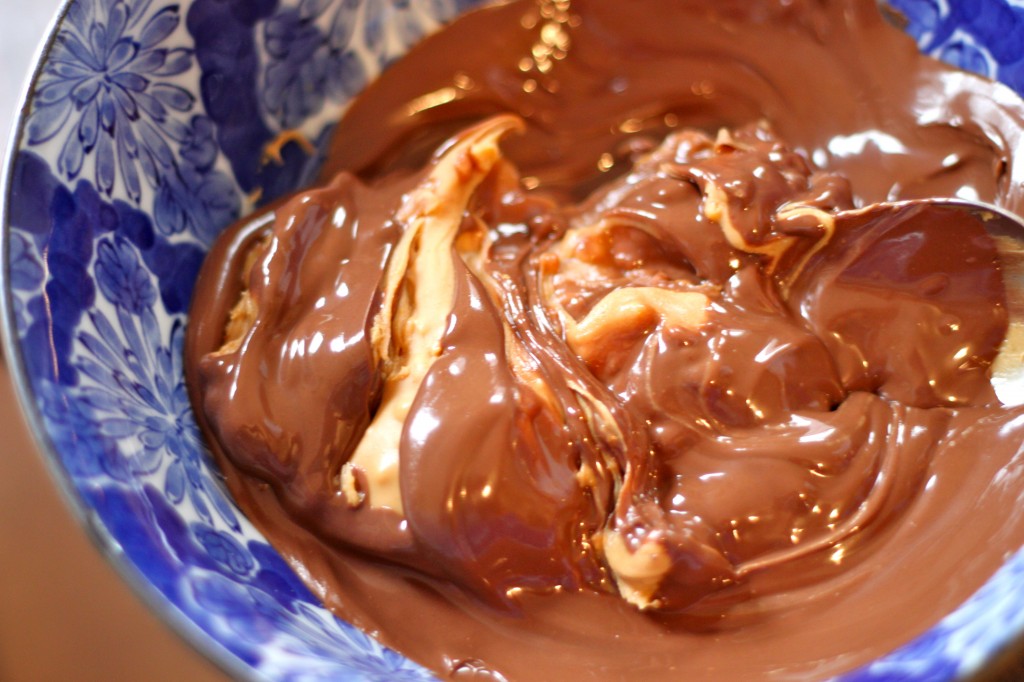 5. Combine the Nutella and peanut butter in a small bowl and microwave it for about 10 seconds, to soften it up. Mix thoroughly. (Spoon-licking encouraged.) 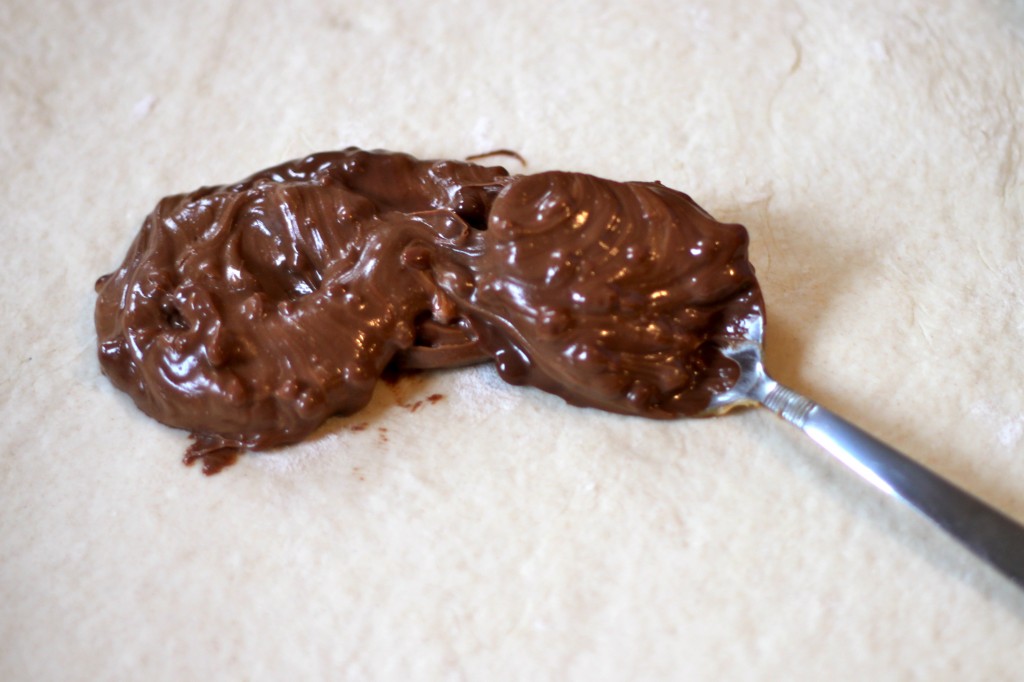 6. Spoon the Nutella/peanut butter mixture onto the surface of the dough, and use a butter knife to spread it out evenly. 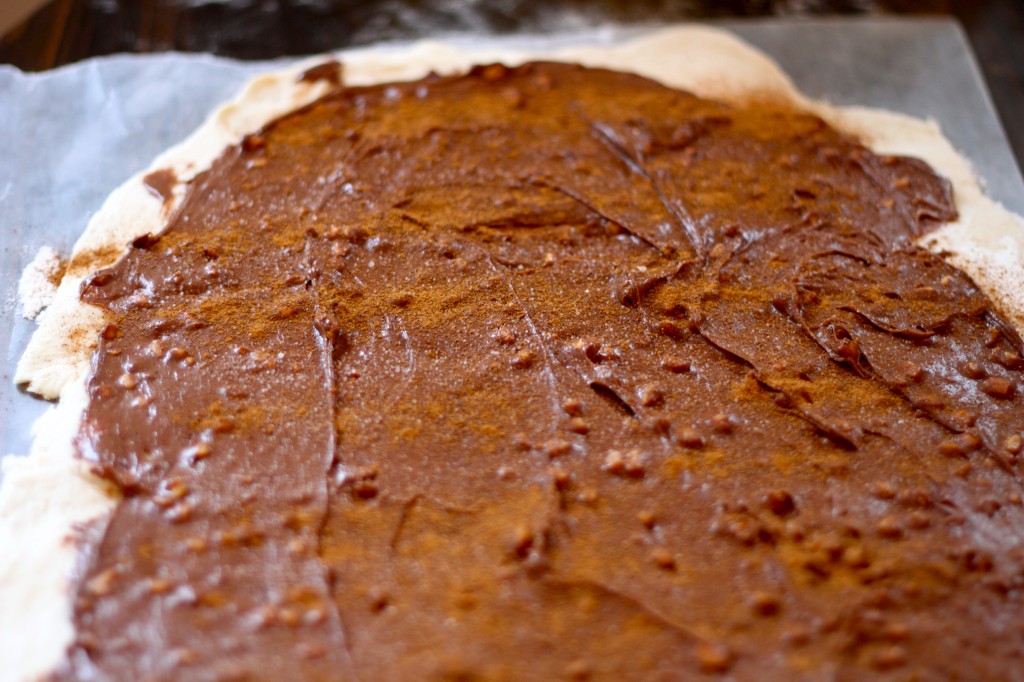 7. Once the Nutella and peanut butter are spread evenly across the dough, sprinkle the surface generously with cinnamon, and then lightly with sugar (brown or white; doesn’t really matter). 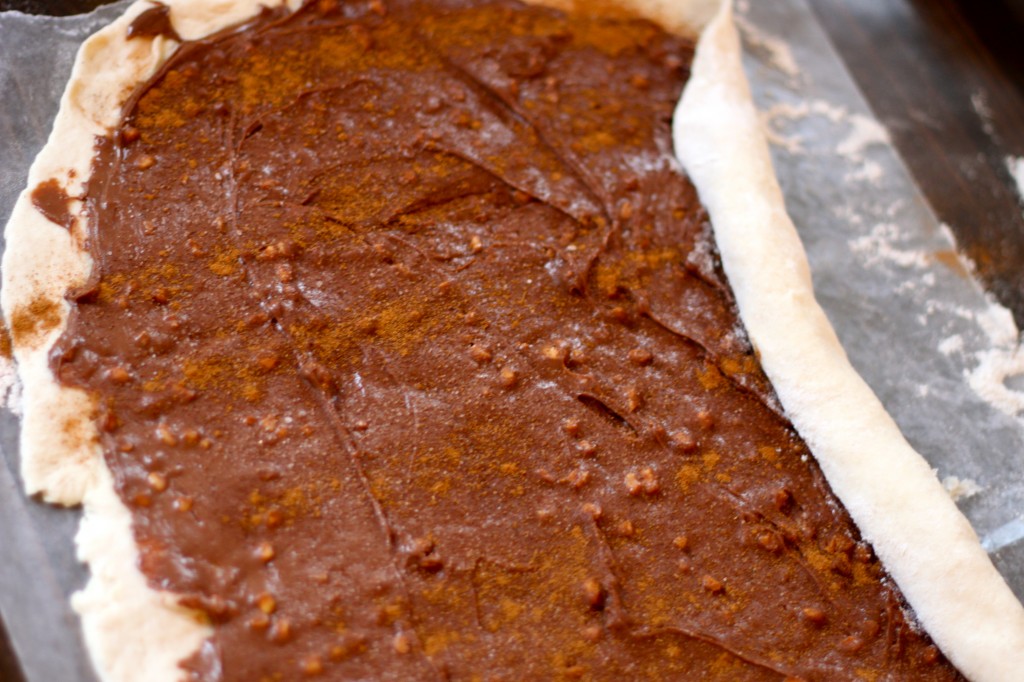 8. Now, here’s why I set down the wax paper. When you start to roll up your dough lengthwise (as pictured above), you may find that certain spots are sticking to the surface. If this happens, just sprinkle a bit more flour along the spots where the dough is sticking and gently work it up. If you’re using wax paper, though, you can just sprinkle the flour onto the wax paper, and then pick up the wax paper by the corners and sort of bounce it so that the flour falls evenly into the crack between paper and dough. That way, you don’t risk making holes with your fingers. 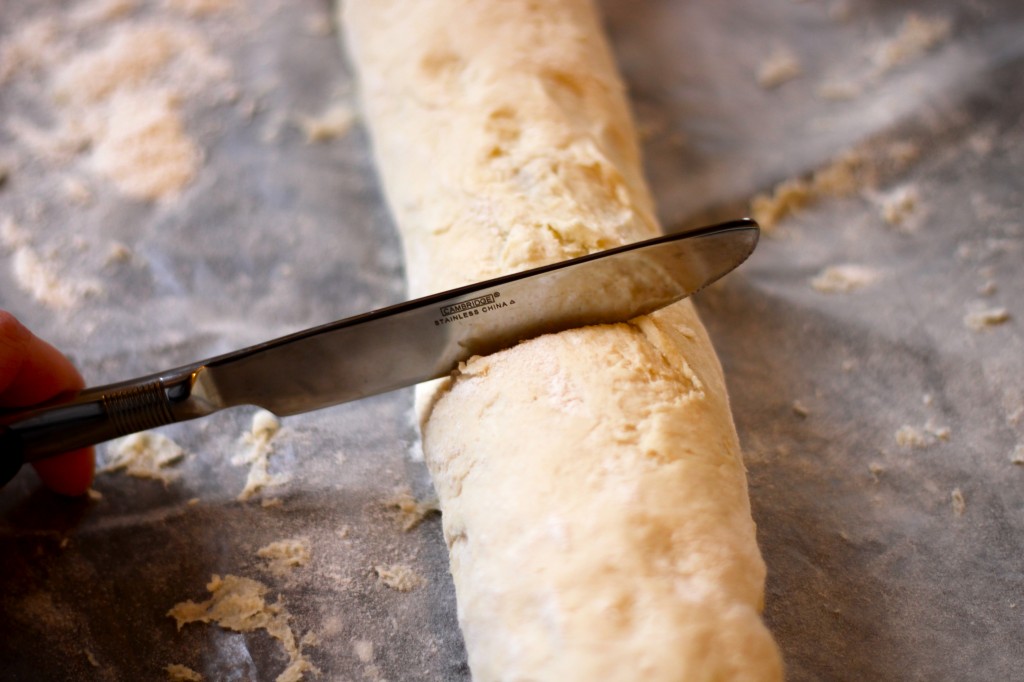 8. Slice the dough into even rounds… 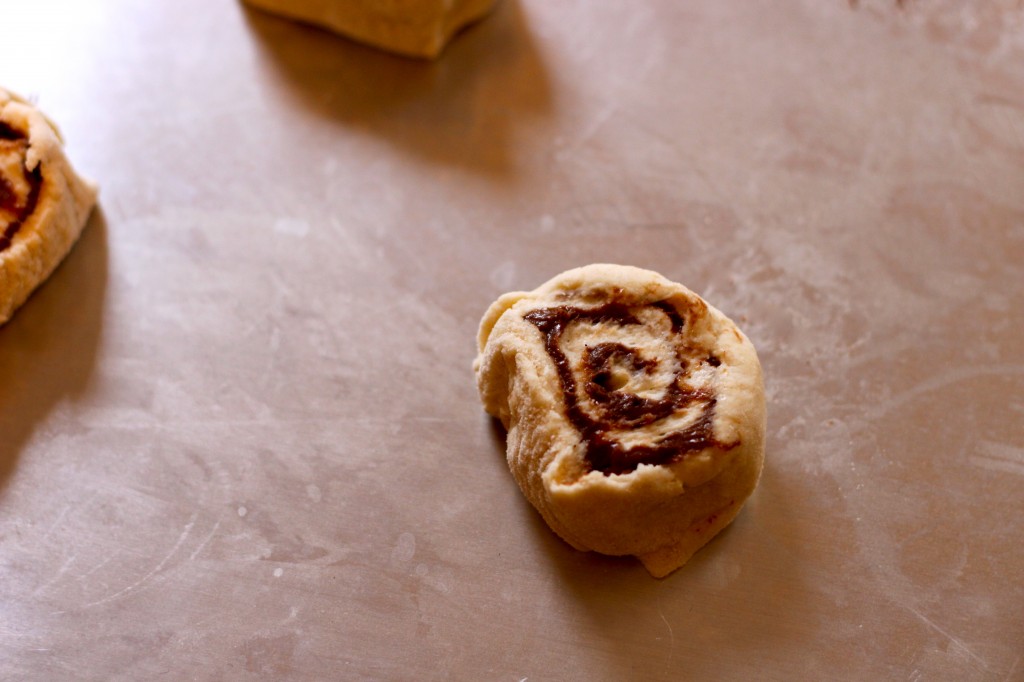 9…and set them about 2″ apart from each other on a lightly greased baking sheet. 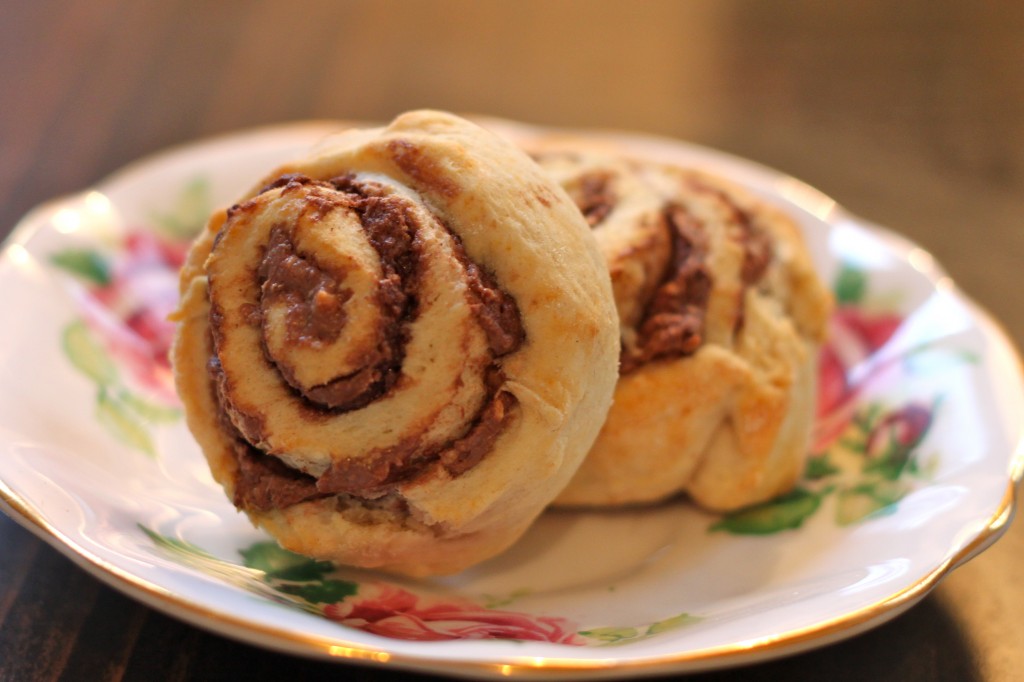 10. Bake at 450F for 12-15 minutes, or until lightly golden brown. Eat immediately (ooh), or store in a tightly sealed container at room temperature. 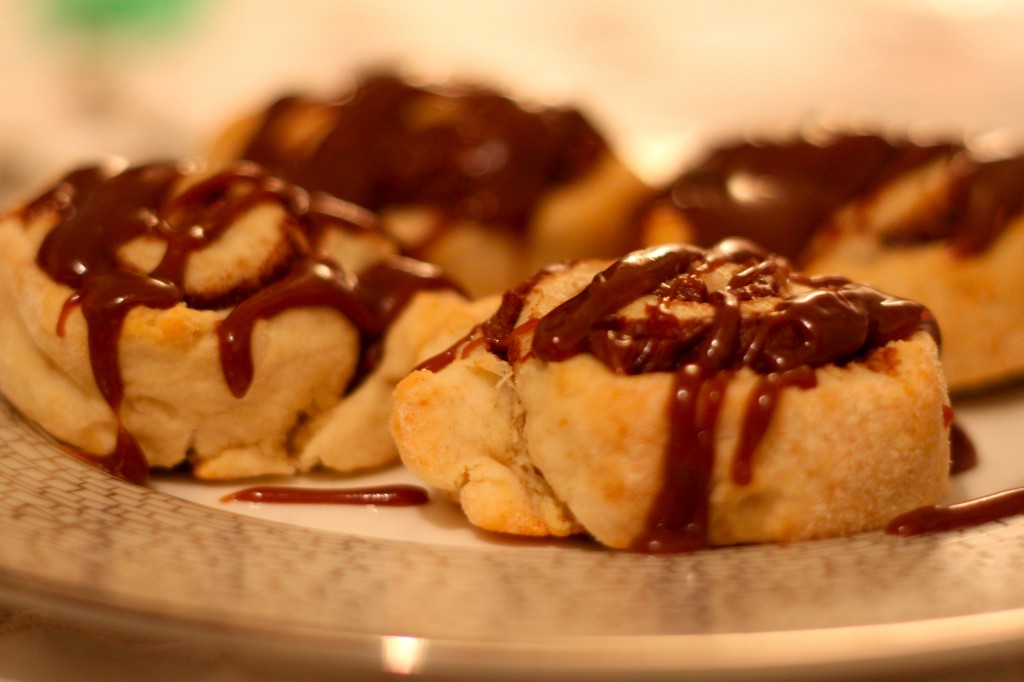 For breakfast/snacking purposes I prefer the unadorned cinnamon rolls, but if you’re serving them for dessert I recommend topping them with Nutella & Cream Cheese Frosting (recipe via).

To make this, all you do is combine a cup of confectioners’ sugar, 1/3 stick softened butter, about 3 tablespoons of cream cheese, and 1/2 teaspoon of vanilla extract in a bowl and mix until smooth. Then add 4 tbsp Nutella and microwave for 15  seconds or so. 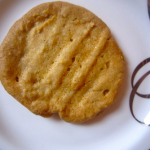 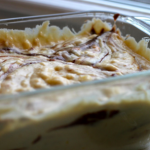 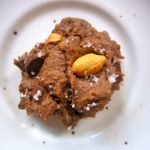