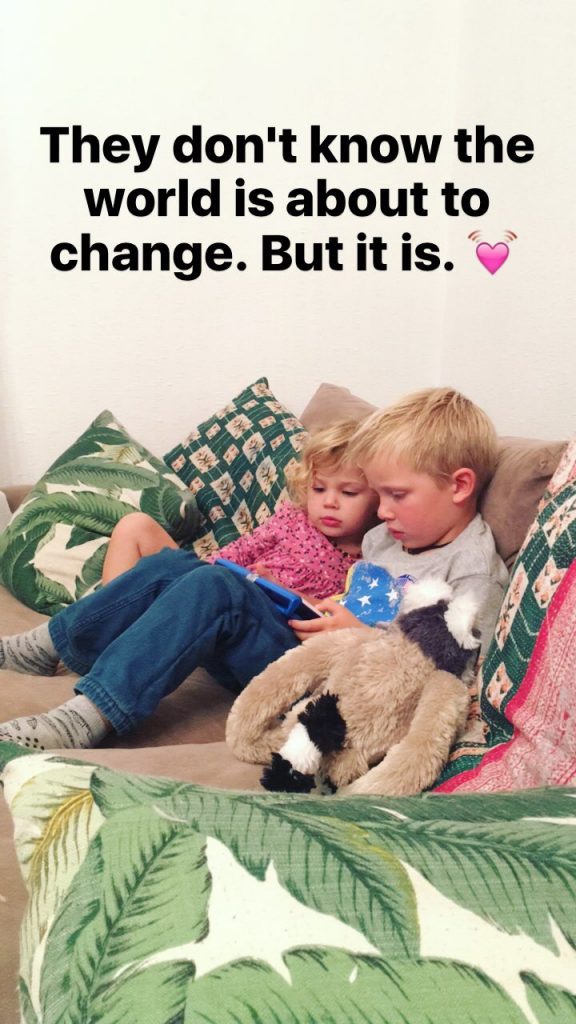 Four years ago to the day, I tucked my daughter into bed, and she asked me to snuggle with her. I laid down next to her and petted her head, listening to the faint sounds of cheering when Hillary won Virginia, and whispered to her, “Are you a boy or a girl?”

“You’re a girl,” I said. “Which means you can be and do anything. And tomorrow morning, you’re going to find out that you can be the President of the United States.”

Then I went to my son, tucking him in and promising that he wouldn’t miss anything, that I’d wake him up to tell him who’d won. I checked the freezer to make sure we had ice cream for our middle-of-the-night party.

Two hours later, I rubbed the tears off my face with a square of toilet paper and went into the bedroom. I tried to wake him up, just to keep my promise. But he mumbled and turned over, so I didn’t try that hard.

The next morning, I awoke at sunrise – not that I’d slept much, anyway – and wrote this:

I am devastated this morning, as are millions of Americans and people around the world. But I have to believe that what we have here is also an opportunity. Trump’s election lays bare a reality that existed before, regardless of whether or not we knew it was so, and that reality was going to exist even if the election had gone the other way. Misogyny and racism and hatred and xenophobia were poisoning our country long before Donald Trump showed up, but the difference now is that these undercurrents have a very big spotlight shining on them. Which means that we can no longer pretend that they do not exist. We can no longer sit back and rest on our faith that everything will work out just fine.

That’s what I did, you know. Sure, I wrote posts about Trump, sure, I was vocal in my support of Hillary – but really, I rested. Because not for one single second did I ever actually believe that this day would come.

Donald Trump is the next President of the United States of America, and what that means is that now we have a responsibility – all of us – to remember who we are, and what we stand for, which is nothing less profound than democracy. Humanity. We can feel sad today, but that sadness better turn to action tomorrow. Because you know what? I’m exhausted and I’m terrified and I’m completely heartbroken…but underneath it all: I still believe. America is great. Americans are great. And we will come back from this because that is what we do.

I’m always telling my son that you stand up to bullies; that you don’t just look the other way when someone is doing something you know is wrong. Now, I suppose, we all have the chance to not just “tell” our kids about bullies and bravery…we get to show them. So let’s do that. Let’s show our children what fighting back looks like, and let’s show them how to be strong. And then let’s show them that we – all of us, together – have the power to fix what’s been broken.

Today is Election Day. Record-breaking numbers of Americans have voted already. As hideous and exhausting and shattering as these past four years have been, it has also been exhilarating to watch what I had hoped to see come true: We fought back – hard. I am frightened. I am hopeful. I love our country, still.

Deep breaths. Hope. Faith. A belief in the fundamental goodness of humanity.