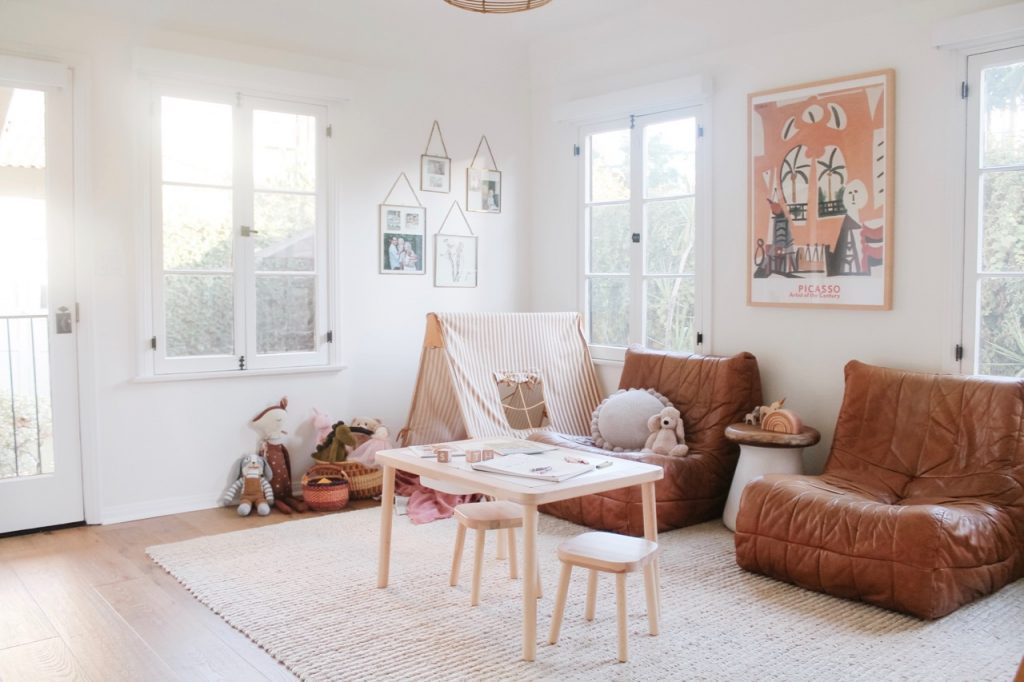 When we found our new house, we knew immediately that we would make one of the downstairs rooms into a play space for the kids. Our first house didn’t have a dedicated playroom, which meant that our living room essentially functioned as their play area.

In other words, the toys were everrrrywhere.

Quick backstory here, because I always think it’s nice to know a little about the history of a house: The previous owners were both scholars, and they each had their own office in the main house. Her office (which is now our playroom) was downstairs, with an exterior door leading out to the backyard, and his office was upstairs. They also had a library downstairs and a guest room, which became Huxley and Tilly’s rooms, respectively. Despite being 100 years old, the house was in great shape – it just needed a little rethinking to make it work for our growing family. 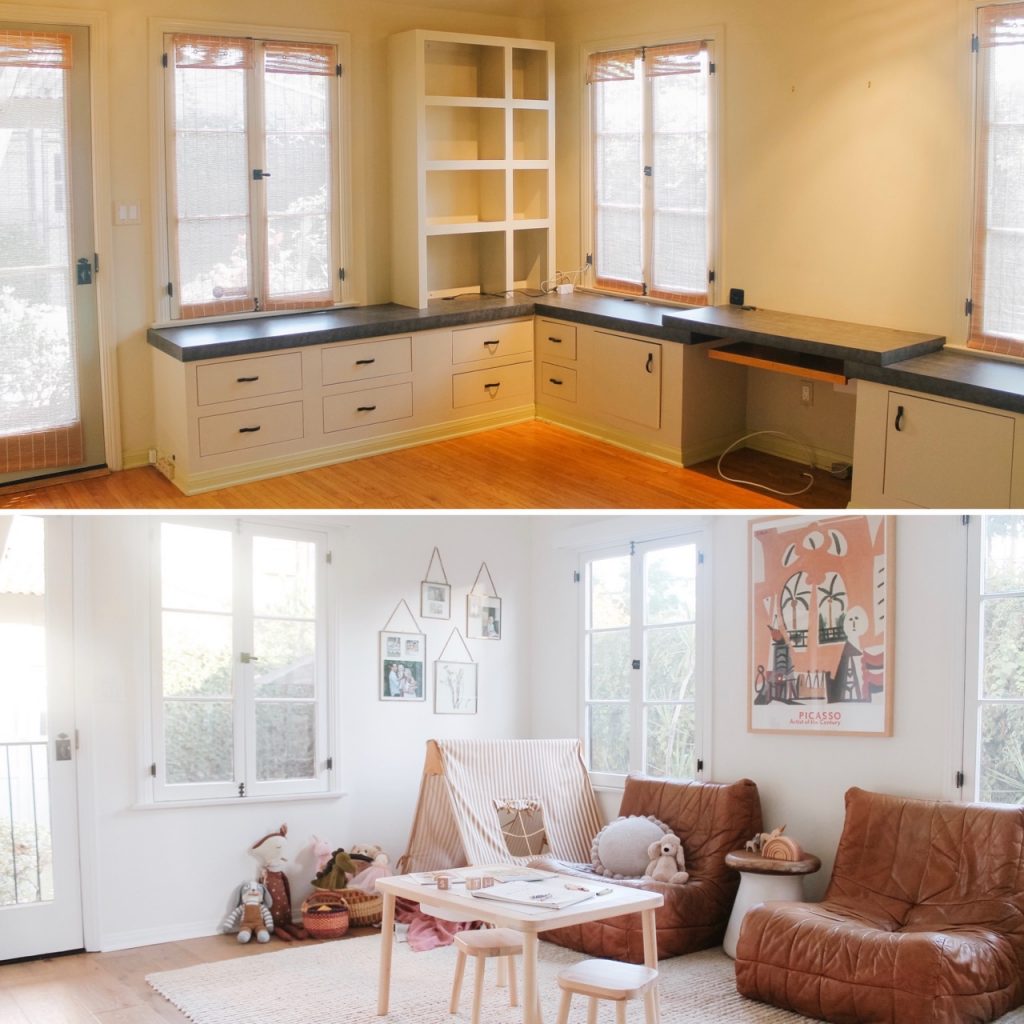 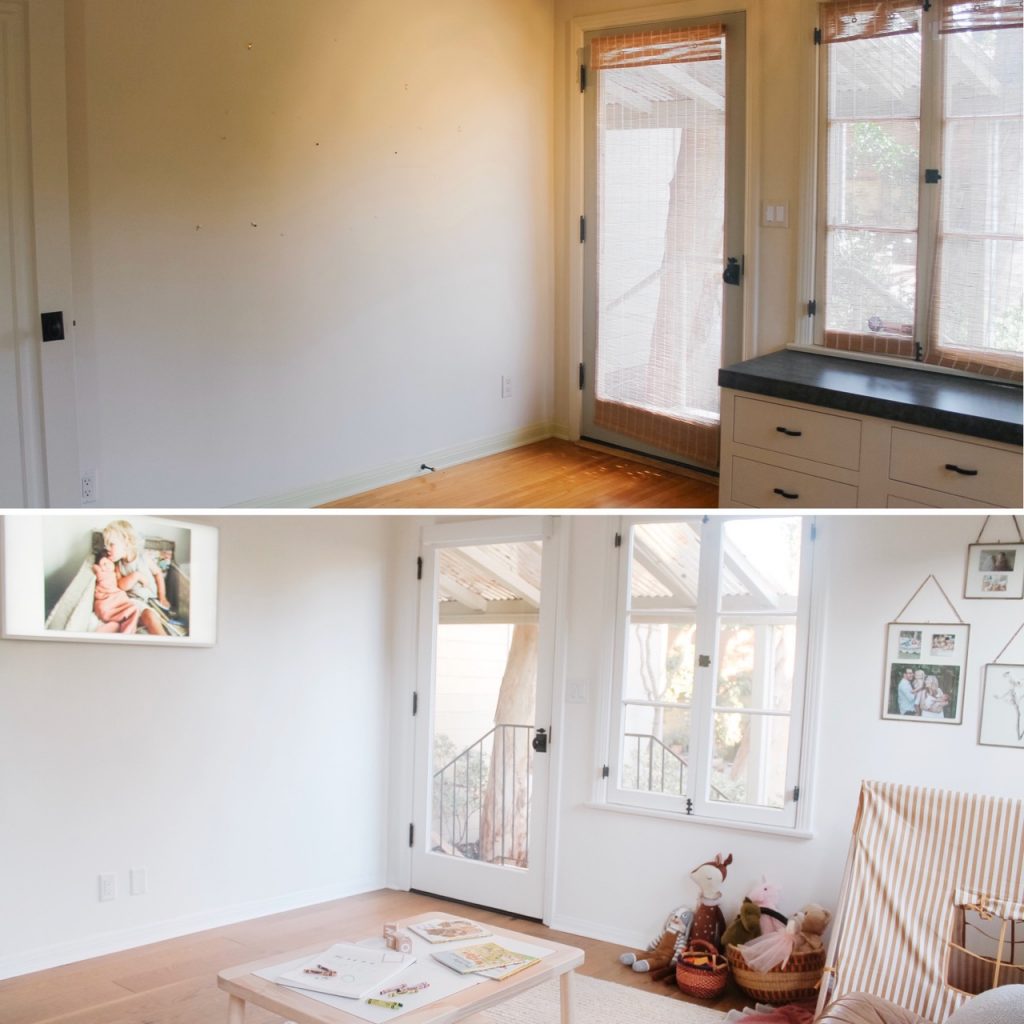 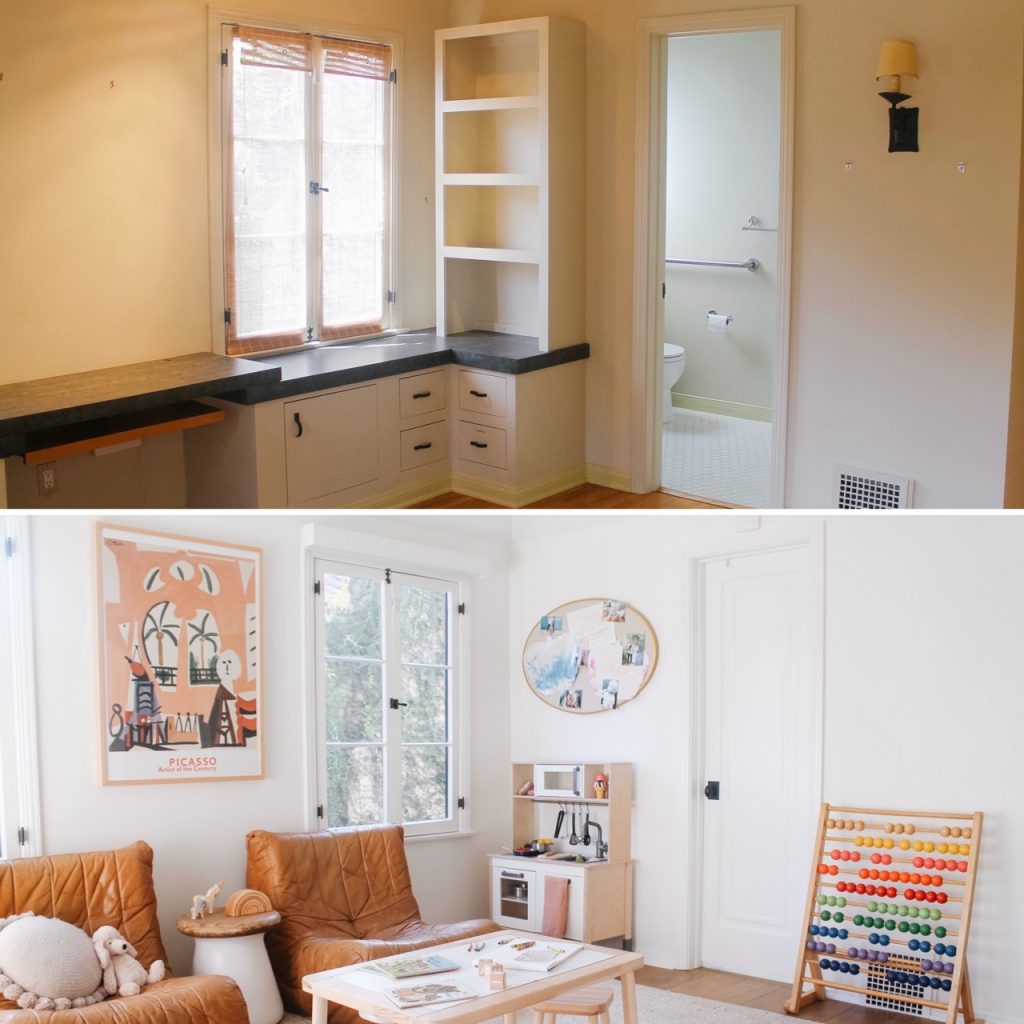 When it came time to design the playroom, I knew that we would need to demo the built-in desk and shelves to give the kids more usable play space. We also did the following:

There were also a few improvements we did throughout the house that made a big impact: we laid new hardwood floors, painted the full interior (Benjamin Moore Simply White), and removed all of the old wiring from the house (old phone and internet lines, alarm wires, you name it). 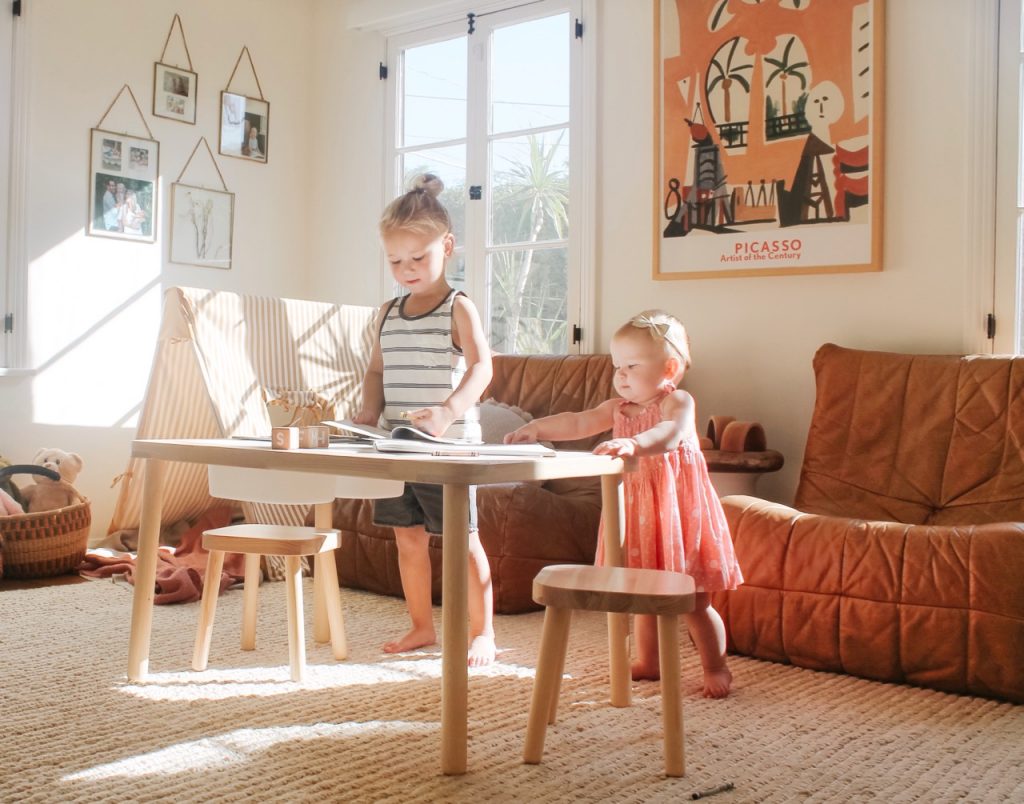 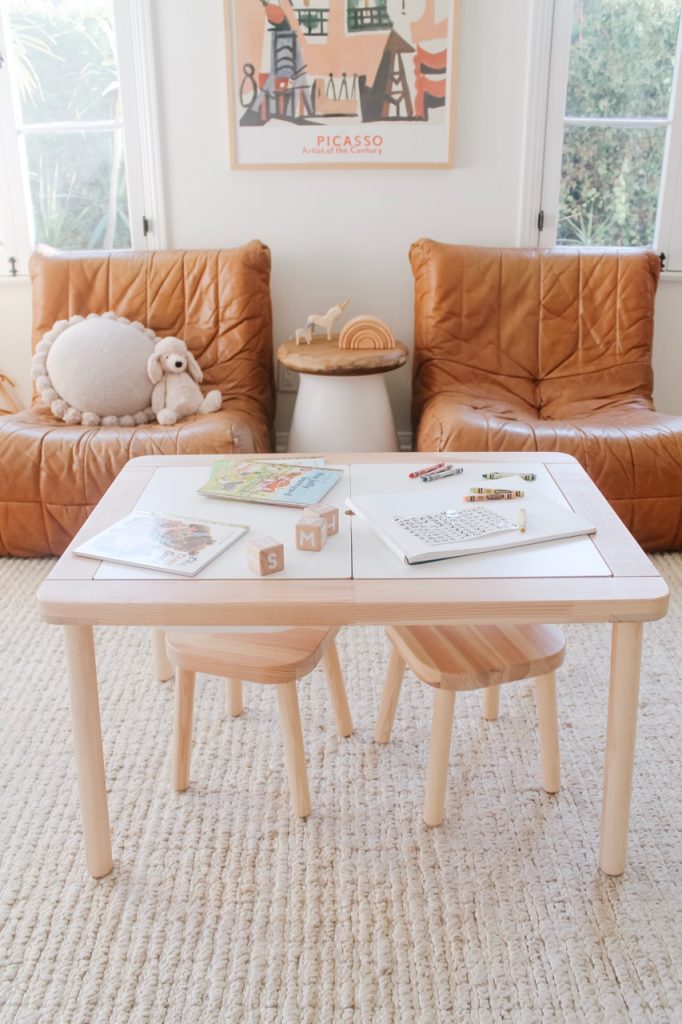 Back in March I was at one of my favorite stores in Los Angeles, Big Daddy’s Antiques, and I spotted this pair of Belgian vintage chairs that I knew would be great for the playroom. They’re low enough to the ground for the kids to easily get on and off of them, and they’re super easy to move around the room. I found the round side table the same day, and it fits perfectly between the two chairs.

We had the play kitchen at our previous home, and I grabbed the matching play table + stools for the new house so that there wouldn’t be too many contrasting wood tones in the playroom. I also fell in love with the mustard stripe tent, which I bought before we moved into the house. Since the room wasn’t that large, I stopped there and decided to wait to see whether the room could accommodate any additional furniture. 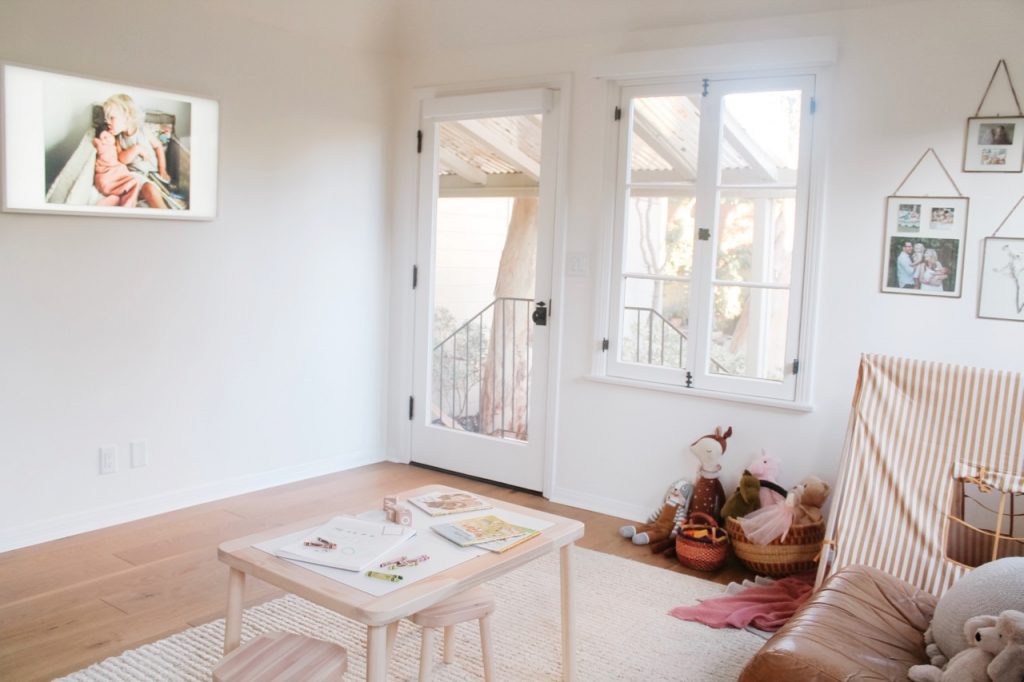 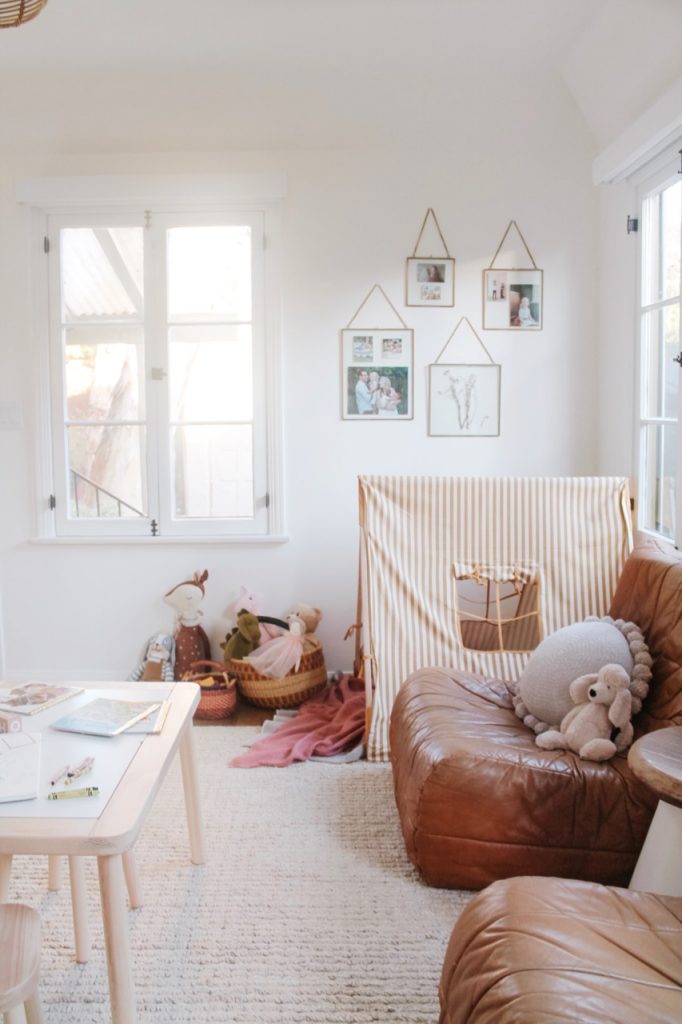 For the walls, I knew I wanted a mix of family photos and the kids’ artwork. I found the bronze hanging frames at Anthropologie and filled them with pictures and dried flowers. On the opposite side of the room, I hung an oval pinboard above the kitchen to display their masterpieces. I love the colors in the Picasso print between the chairs, and I used Framebridge to frame the poster once it arrived.  The opposite wall has a Samsung Frame TV on it, which we use to display our favorite photo of the kids.

The room is full of beautiful light, but I wanted window coverings that wouldn’t get in the way. I ended up going with motorized shades in a soft, textured white fabric. They roll up into a cassette that’s mounted on top of each window frame, and we can choose the stopping point for each of them when they’re rolling down (this is key, as Tilly is walking now and loves to pull on things!).

We’ve been in the house for four months now, and I’m so glad I didn’t buy any more furniture for the playroom. It’s been really nice having open space to accommodate whatever activity the kids are into. I’m sure this room will go through many iterations as they get older, but for now it’s exactly what we need for a 1 and 3 year old, and we all adore it. 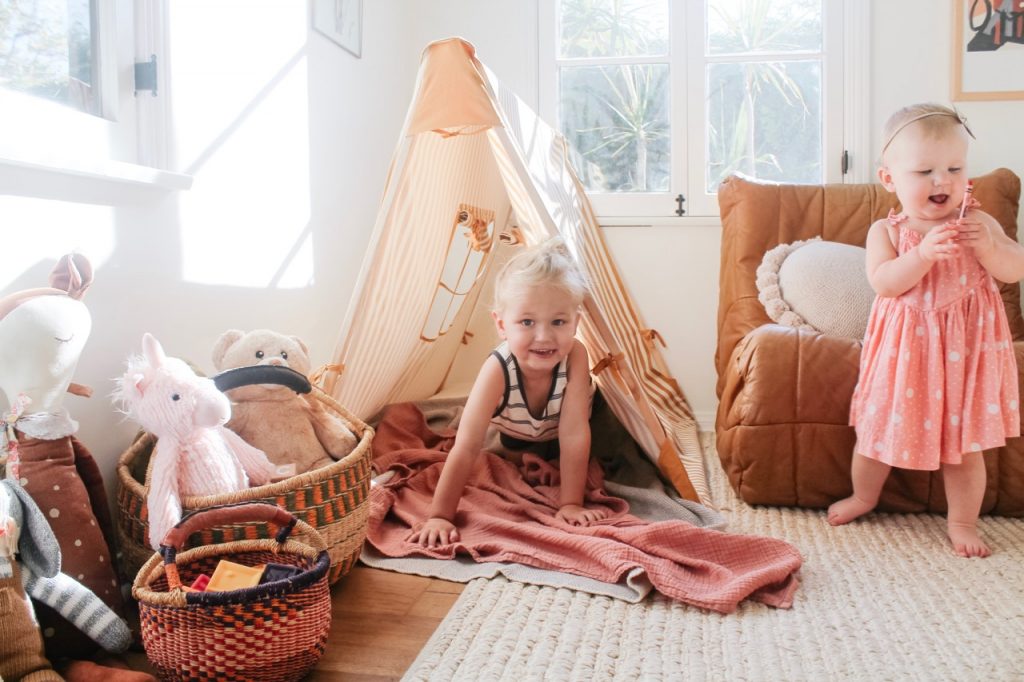 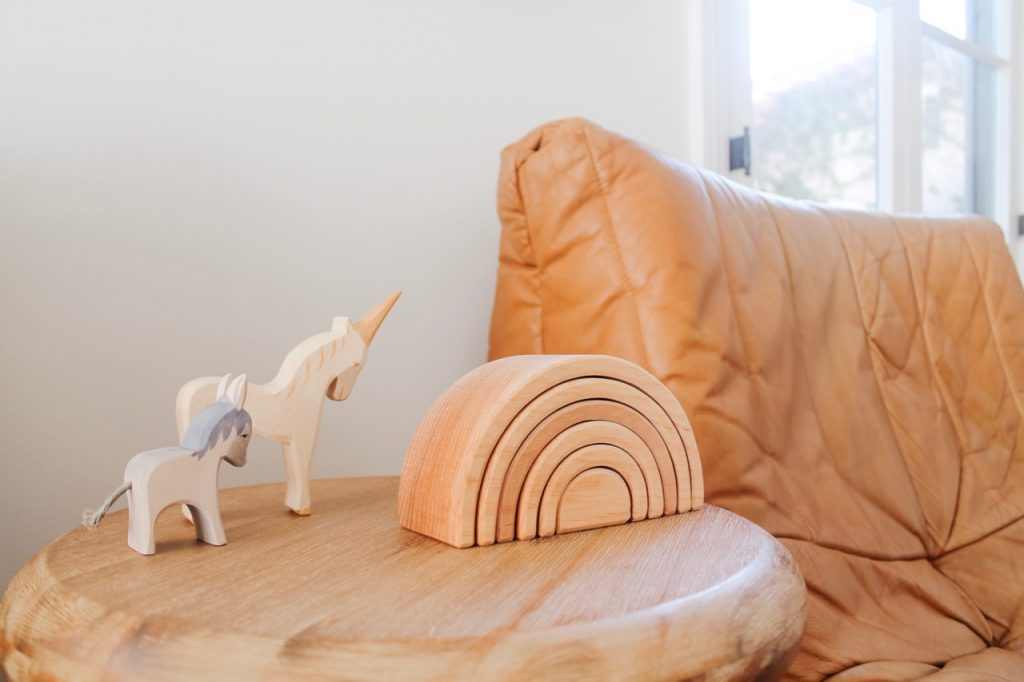 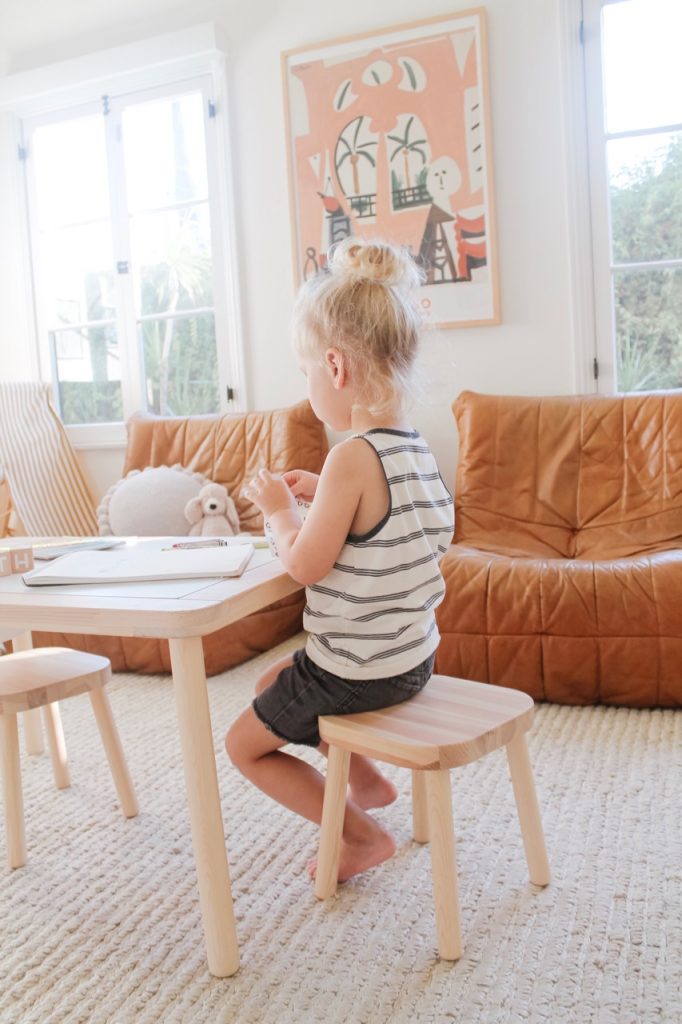 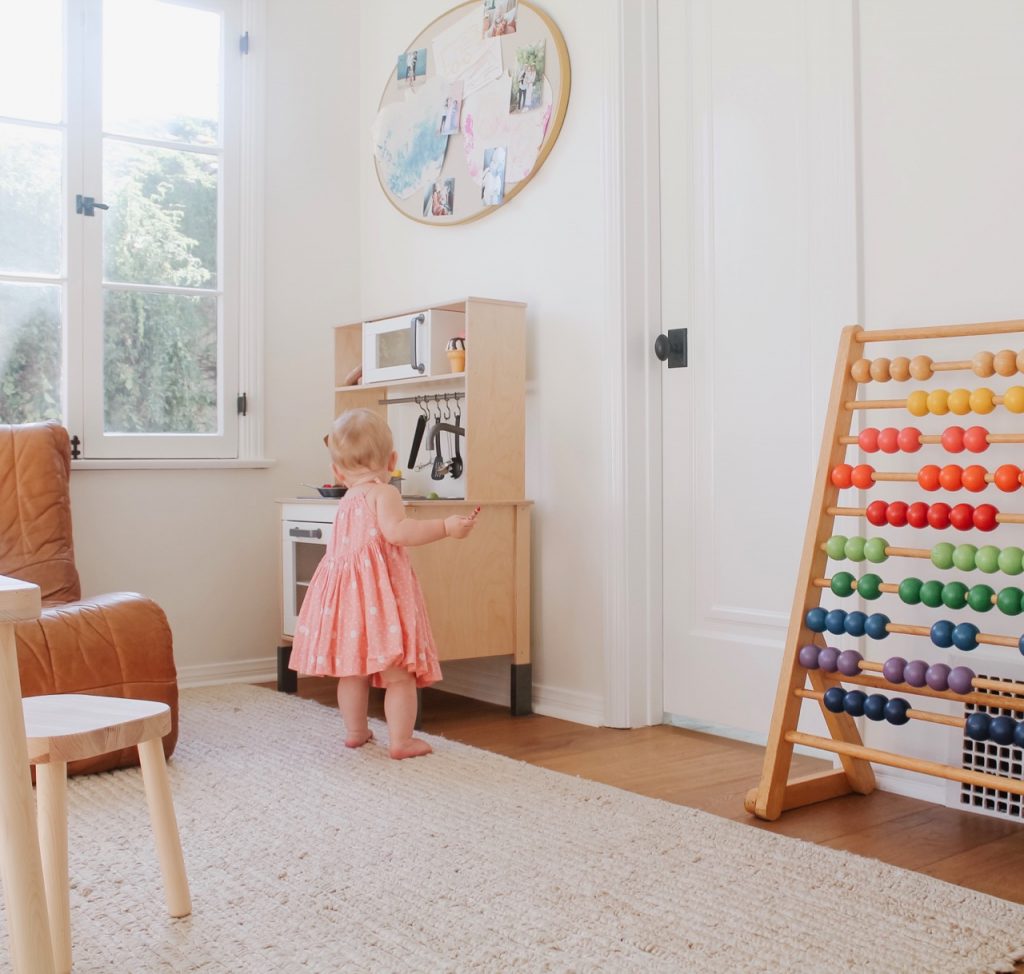 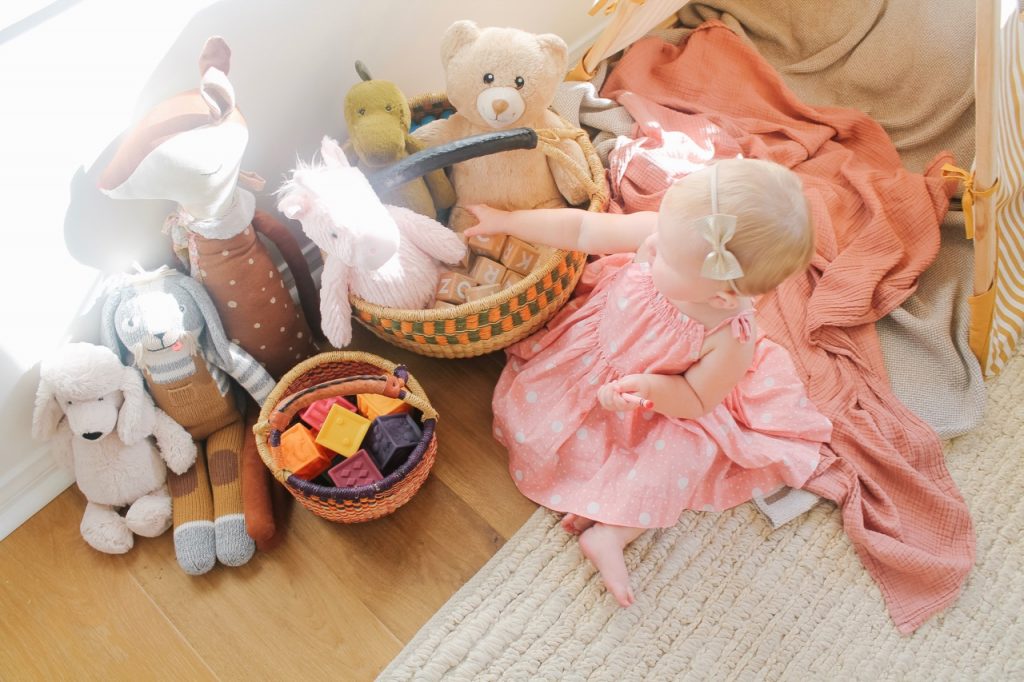 Audrey is a native Texan living in Los Angeles with her husband (Matt), their two kids (Huxley & Tilly), and a four-pound poodle (Shadow). She studied advertising at the University of Texas in Austin and worked in the ad industry for 10 years before leaving to pursue her passion for interior design. On RG, she’ll be sharing all about her full renovation of her new 100-year-old house in one of L.A.’s most historic neighborhoods.