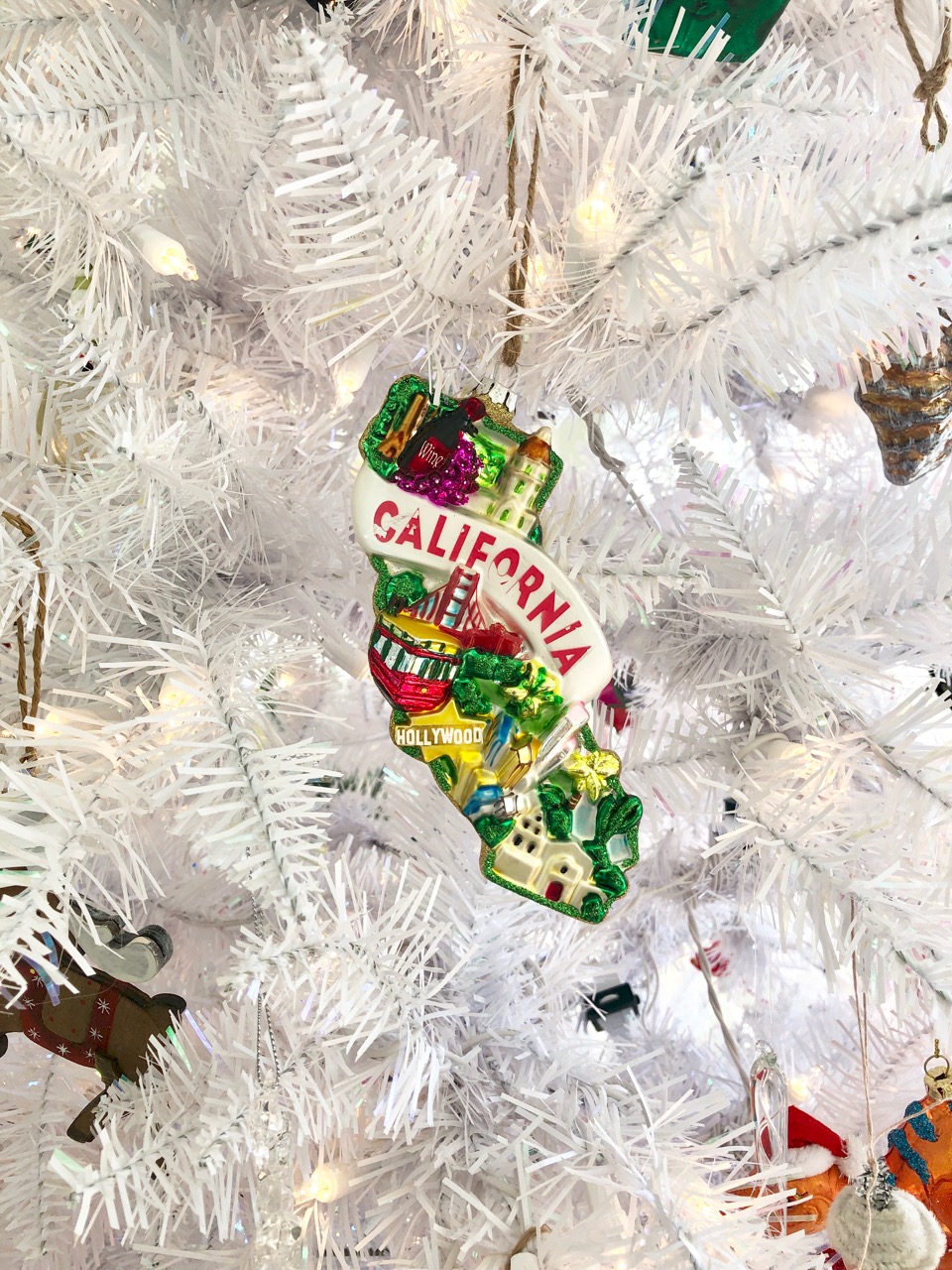 Kendrick asked me the other day whether it’s weird for me to live in a house that I don’t own. He knew how important to me it was; the ability to work on a house and make it my own felt like…I don’t know, like an intrinsic part of who I was. And the pride that I got from home ownership after many years of not thinking it was anywhere within the realm of possibility for me was enormous.

But you know what I said to him?

Because when the pool equipment breaks, or there’s a catastrophic sewer issue, or the plumbing needs repairing, you know who handles it?

It’s kind of lovely. And there’s also this: I’ve gotten to know a whole lot of divorced women over these past few months, and there’s an odd little shared detail that comes up over and over again in our conversations. You know how I spent a solid three years renovating my house from top to bottom, and then ended up splitting up with Kendrick and selling the house virtually the second it was done?

Apparently this isn’t uncommon. And I’m not making an “Oh, renovating is so stressful it ends marriages!” joke; I think the reason that I keep hearing from so many people that they were actively working on their homes at the time that their marriages collapsed is simple, and real: When everything is falling apart, it can help – or feel like it helps – to create the appearance that it’s all being held together.

If your life looks perfect, maybe it will be.

I see that now, that what I was doing was trying to stitch up the fissures in our marriage with wallpaper and tiling. With dinners made with fancy ingredients, and colorful Bento box lunches for the kids. With hors d’oeuvres served at parties, and clawfoot bathtubs, and everything just-so.

Look, I haven’t all of a sudden transformed into a sloth. I still care about how the place I live looks; I still want things just-so; I still admit to enjoying a bit of pretension in my approach to entertaining (pretty wine charms FTW). But I think I also feel more able, nowadays, to step back a bit and figure out what actually matters to me…and then just let all the rest of it go.

Aaaanyway. My house. I LOVE IT. It is all white walls and high ceilings and windows and mirrors everywhere, and there’s a bit of a Miami Vice vibe to it that I like very much. I also lucked into having landlords who were cool with me swapping in my own light fixtures, which was really the only major thing that I felt like the place needed (as with our last place, this house has very little in the way of overhead lighting, and I’m alllllll about the ambient glow).

Let me address the elephant in the room: This place is huge. Like, farrrrr bigger than I had realized when I decided to rent it, and definitely bigger than I needed it to be. I saw four bedrooms, and thought, “Cool! We’ll have a real guest bedroom!” Except I didn’t process that we’d also have an office, and a massive eat-in kitchen, and two living rooms. It seems that the fact that the house was empty plus the fact that I had about thirty seconds to find a place for us to live left me unable to comprehend just how much furniture I was about to have to buy.

But still: I love it. Worth it. May never leave it.

Shall we do a room-by-room? Let’s go. 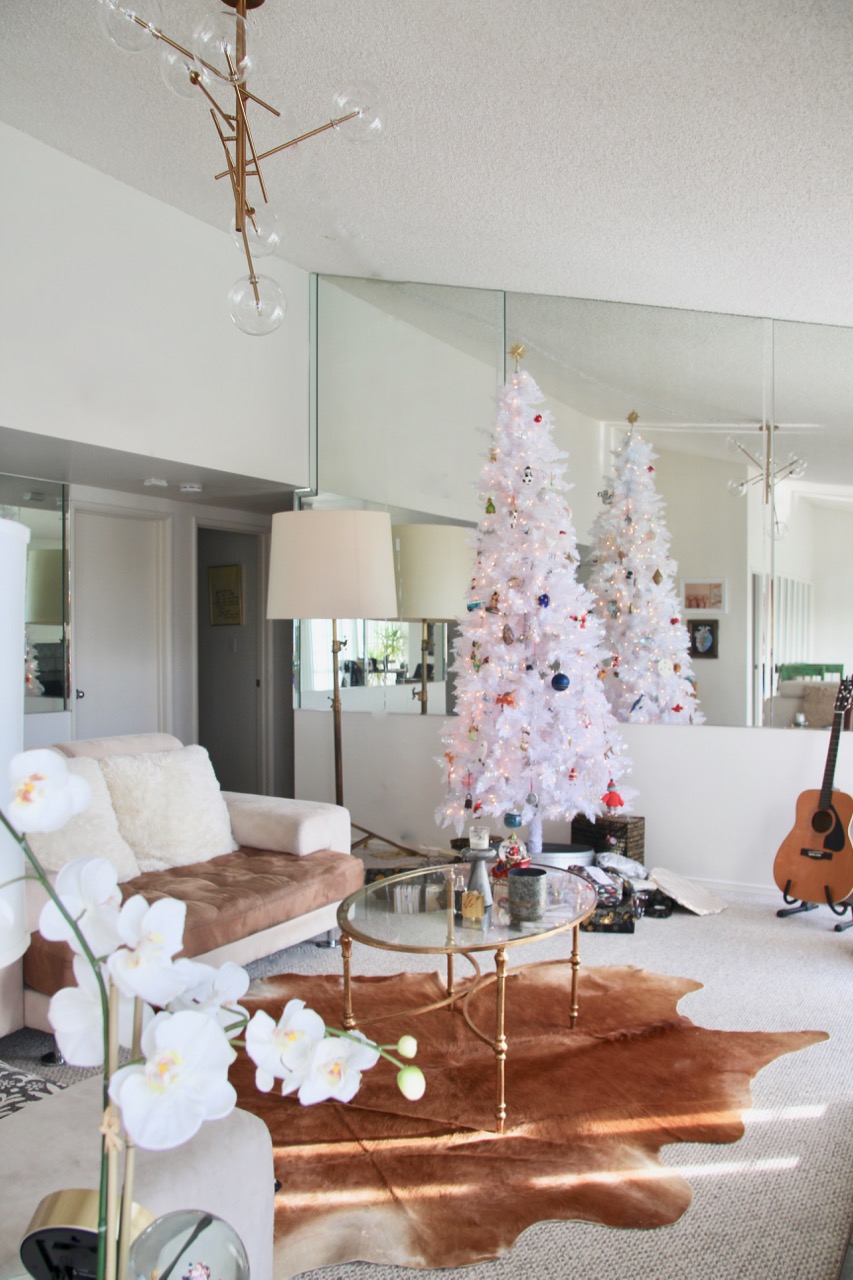 This is the “formal” living room – I know, fancy fancy – and is where I spent most of my just-me time, because it’s where the fireplace is and because it looks directly out onto the pool, which makes me happy. It’s also where my cowhide rug is located – and as much as I miss Virgil (who lives with Dad now), I do not miss being unable to own a cowhide rug.

And can we please talk about that white Christmas tree??!?? I have wanted one forever, and decided that what the hell: newly divorced and living in Los Angeles seems like a good time to pull the trigger on this particular life choice. 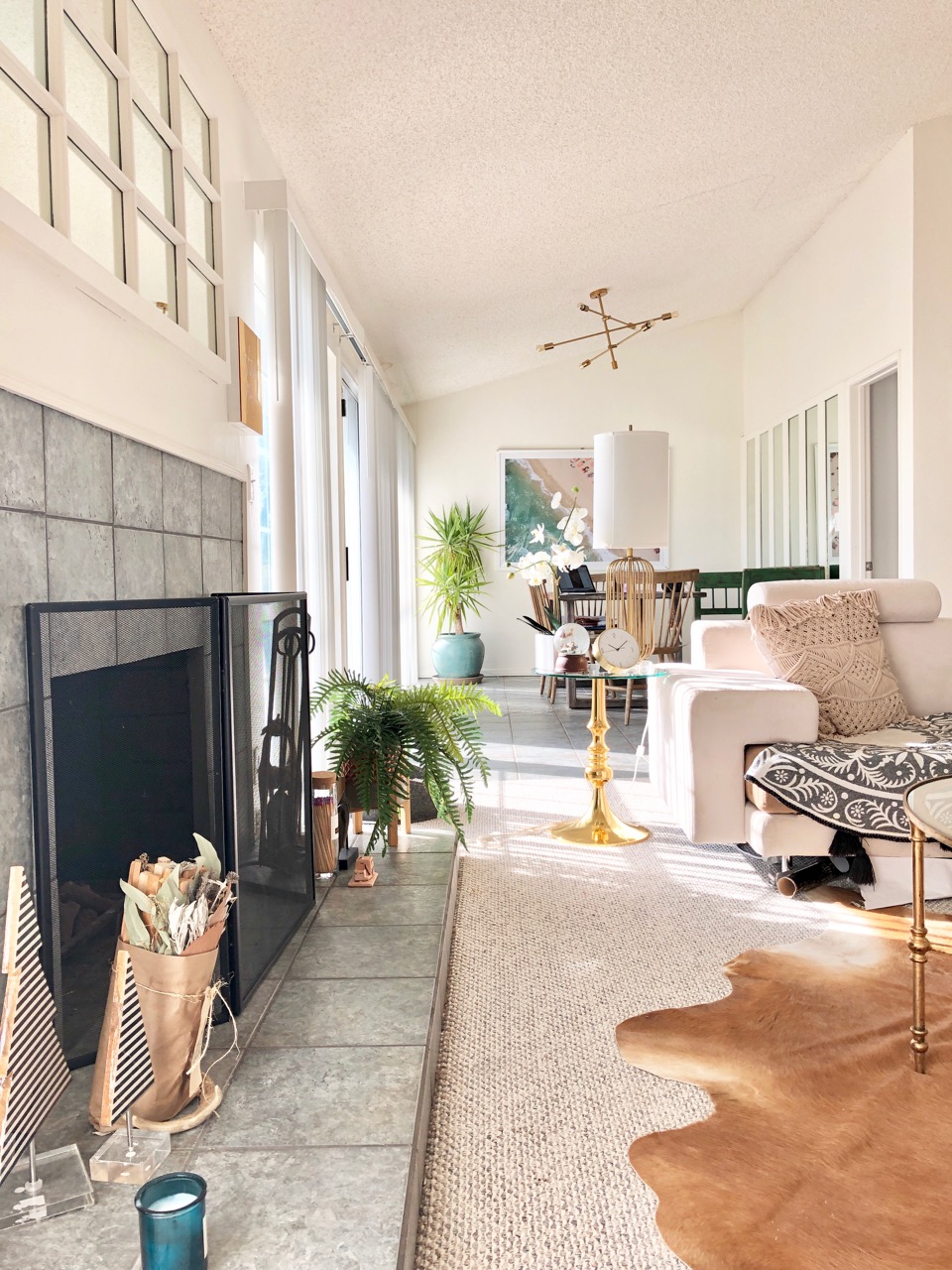 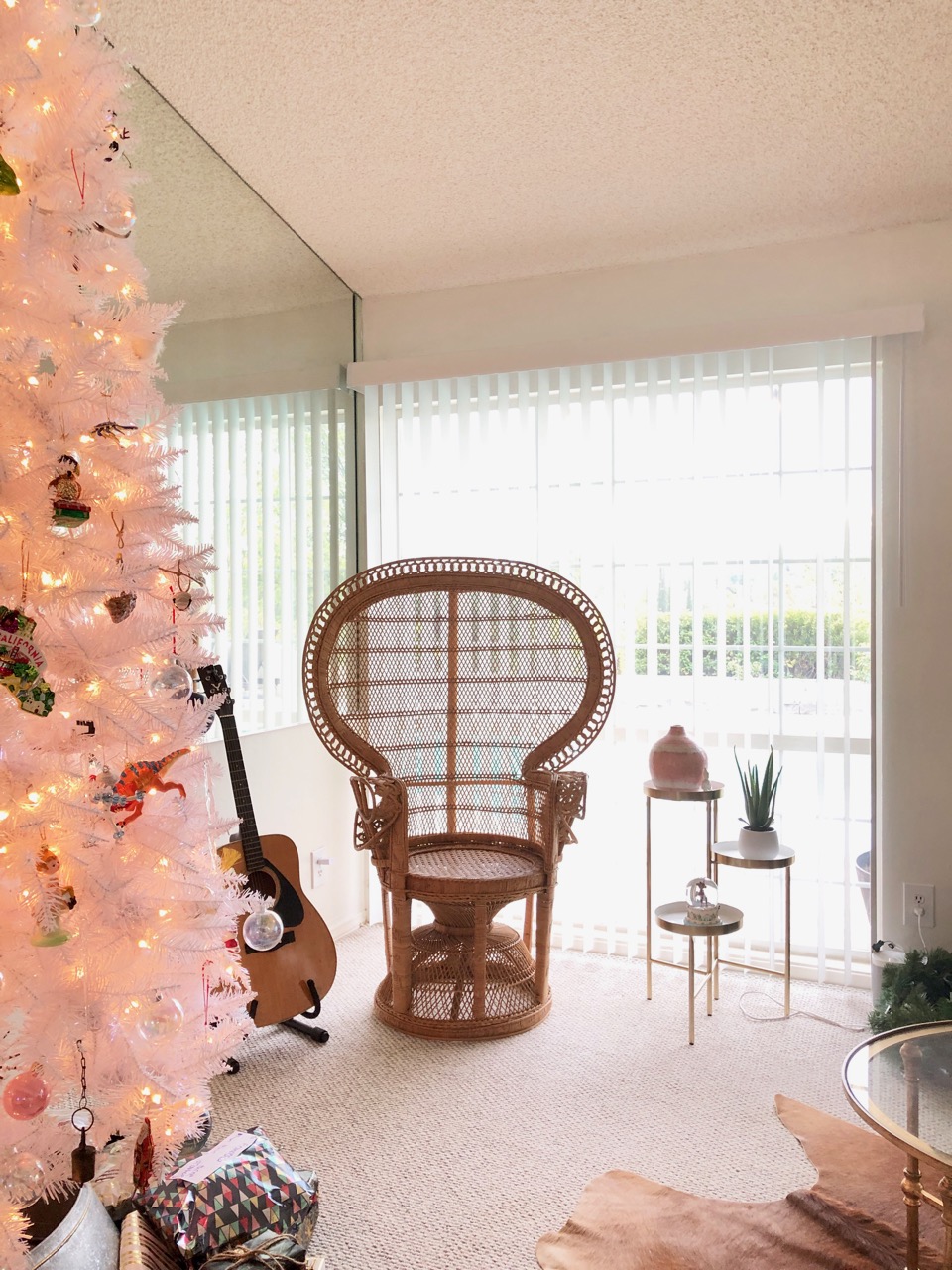 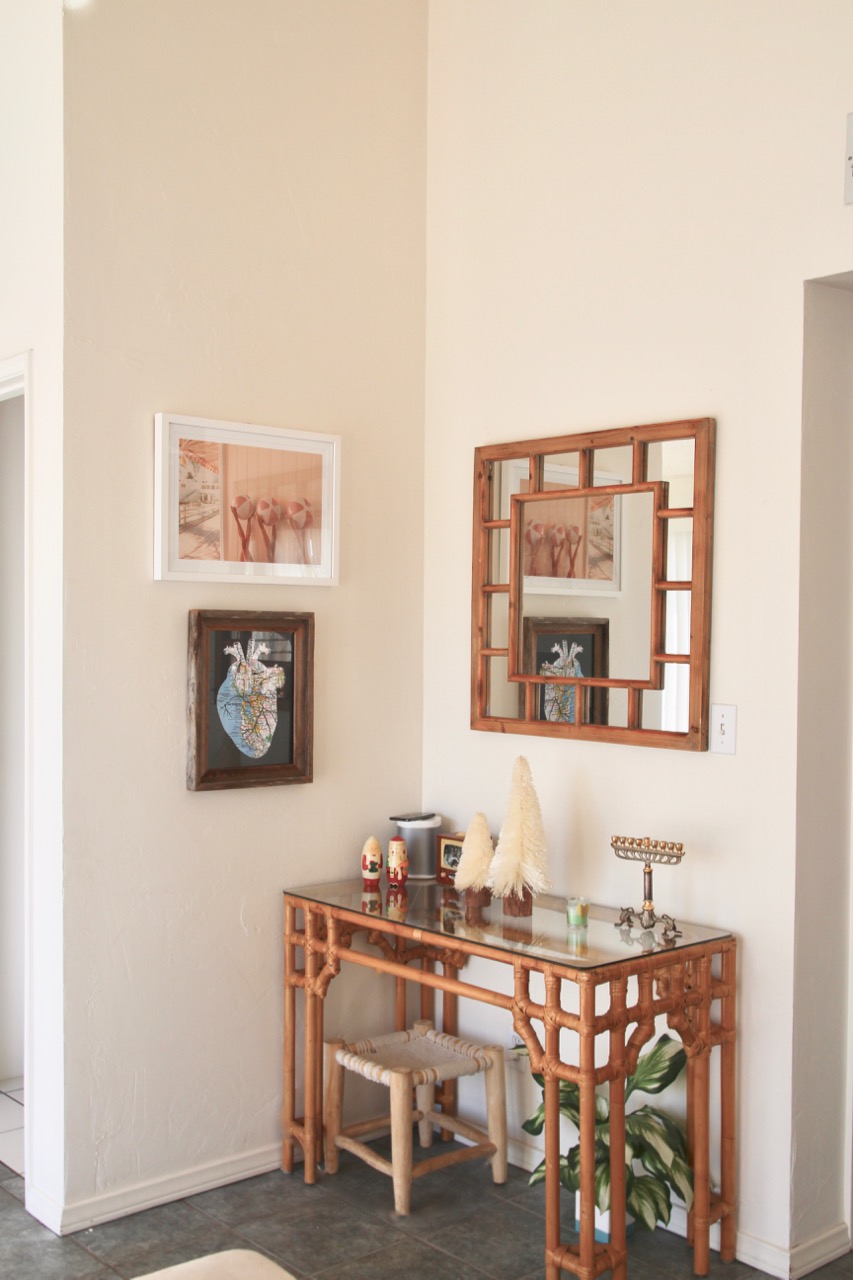 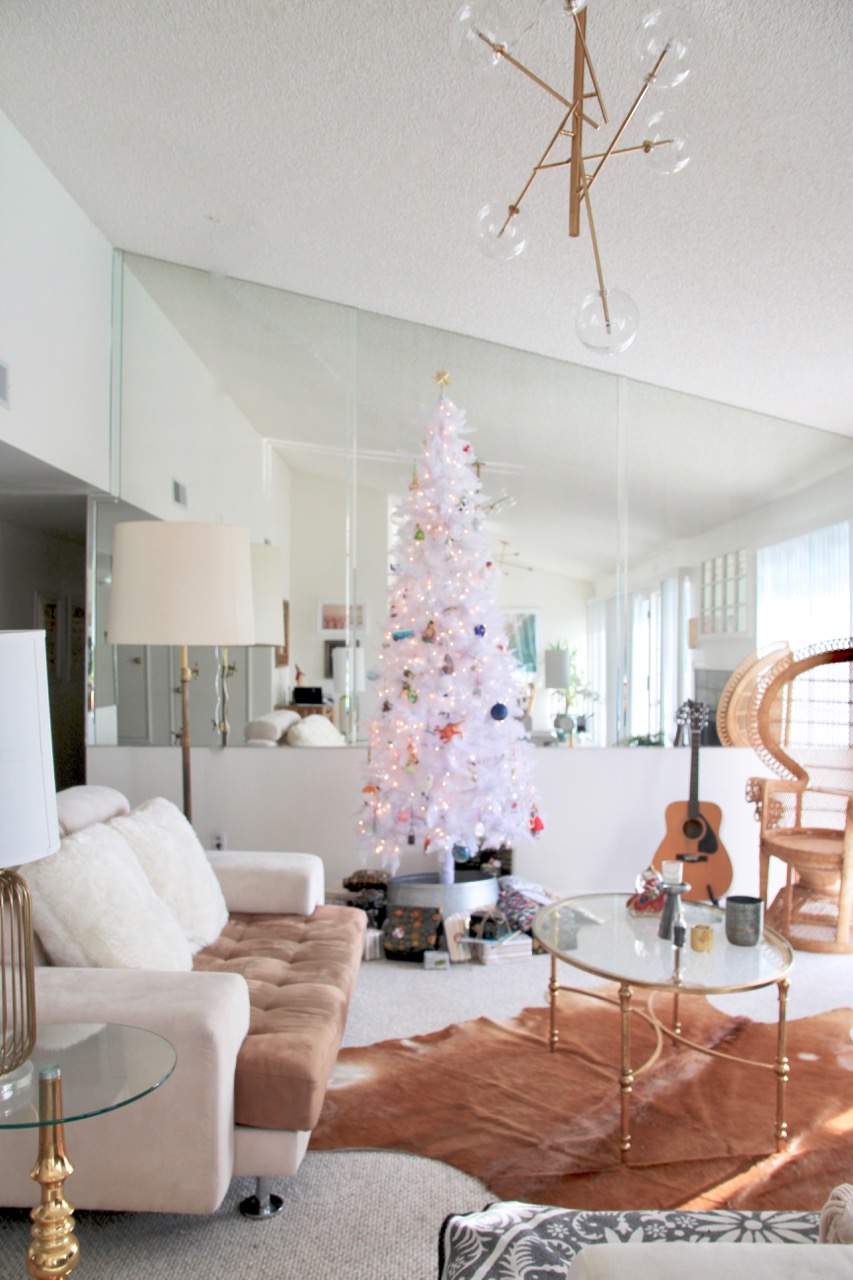 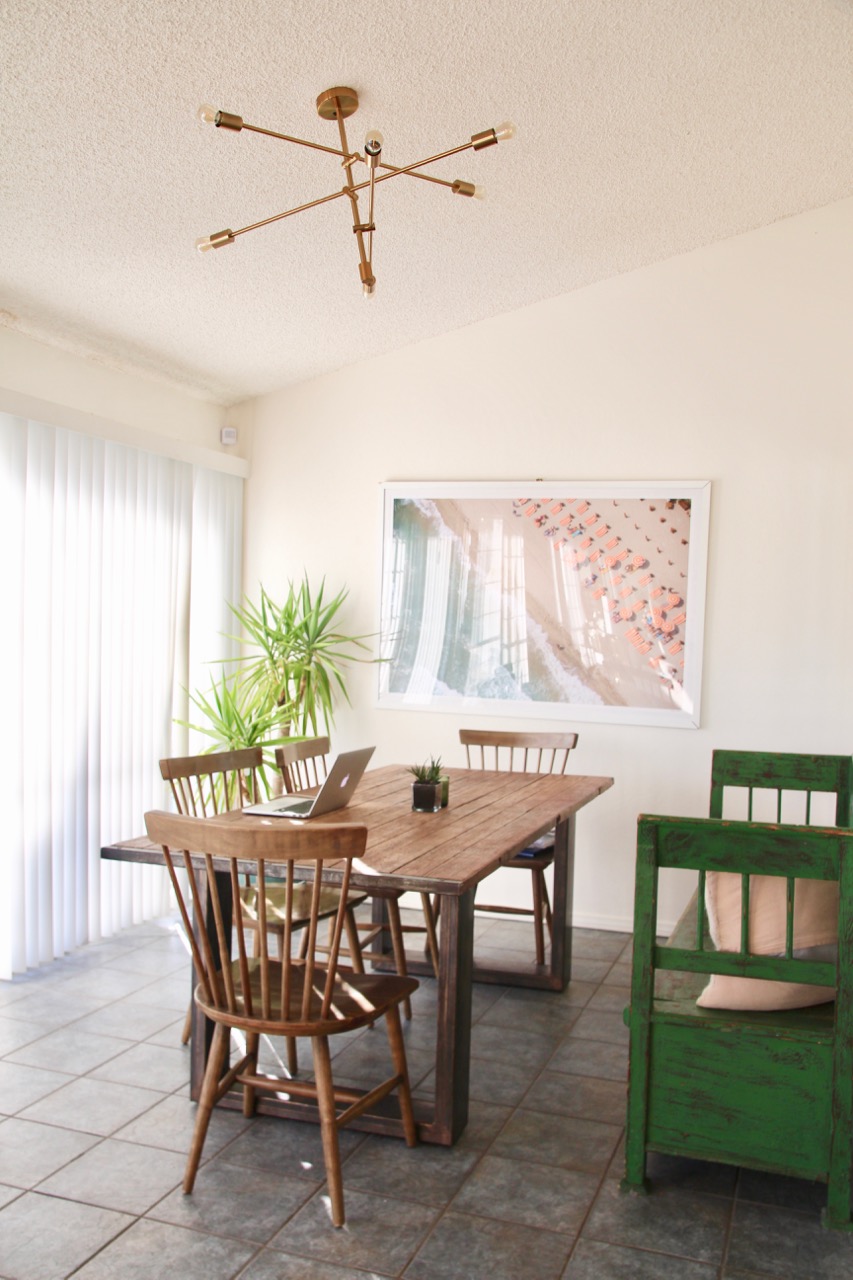 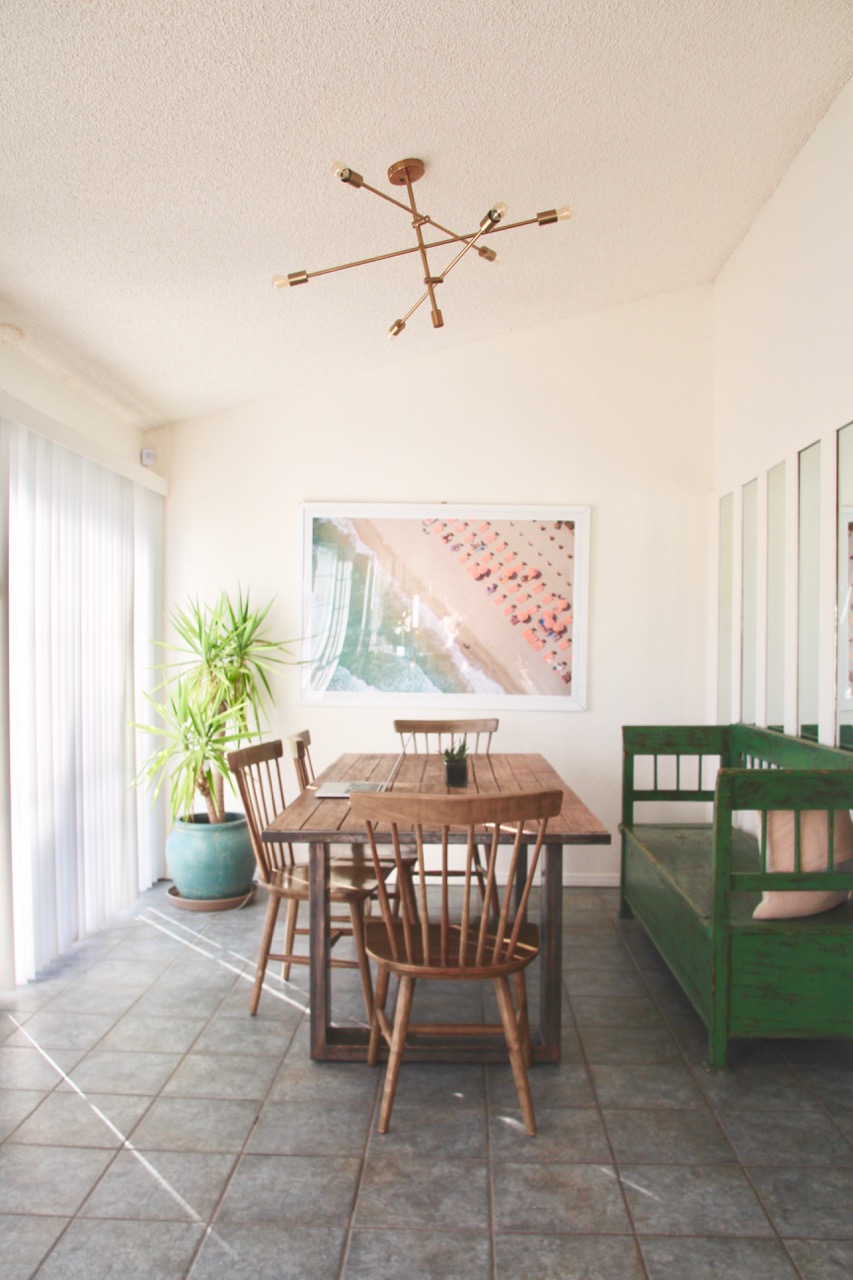 The dining room is pretty much a virtual replica of our old one: It was the perfect size and shape for our table, bench, and chairs – all I added was the chandelier. And, just like in our last house, the dining room also doubles as my office, despite the fact that I technically have a separate office space. 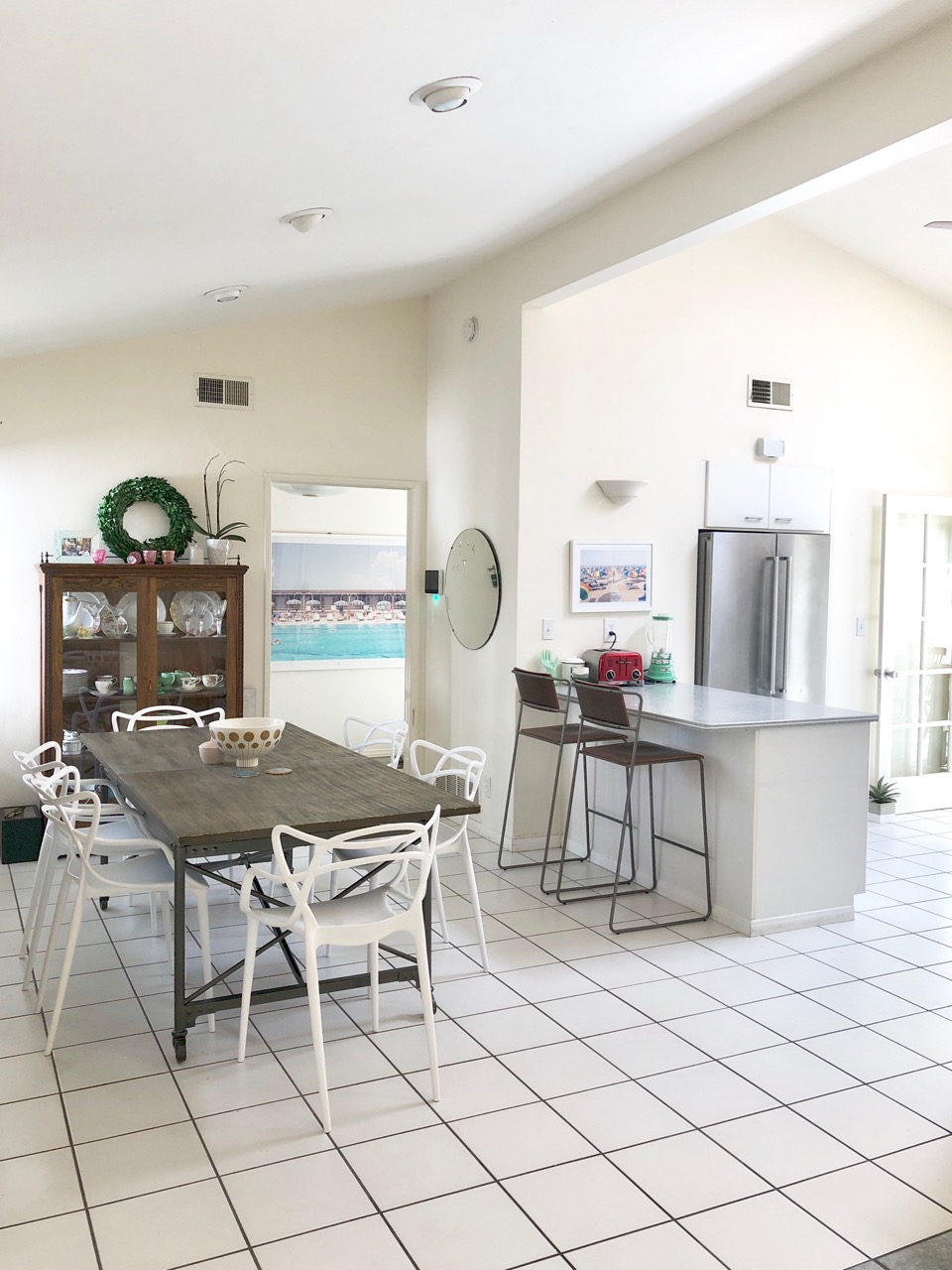 The kitchen. Shortly after we moved in, I picked up that table at HomeGoods, and found the chairs – Eames replicas – on Craigslist. The bar chairs are from Target, and – thank you, Target – came pre-assembled, hooray. 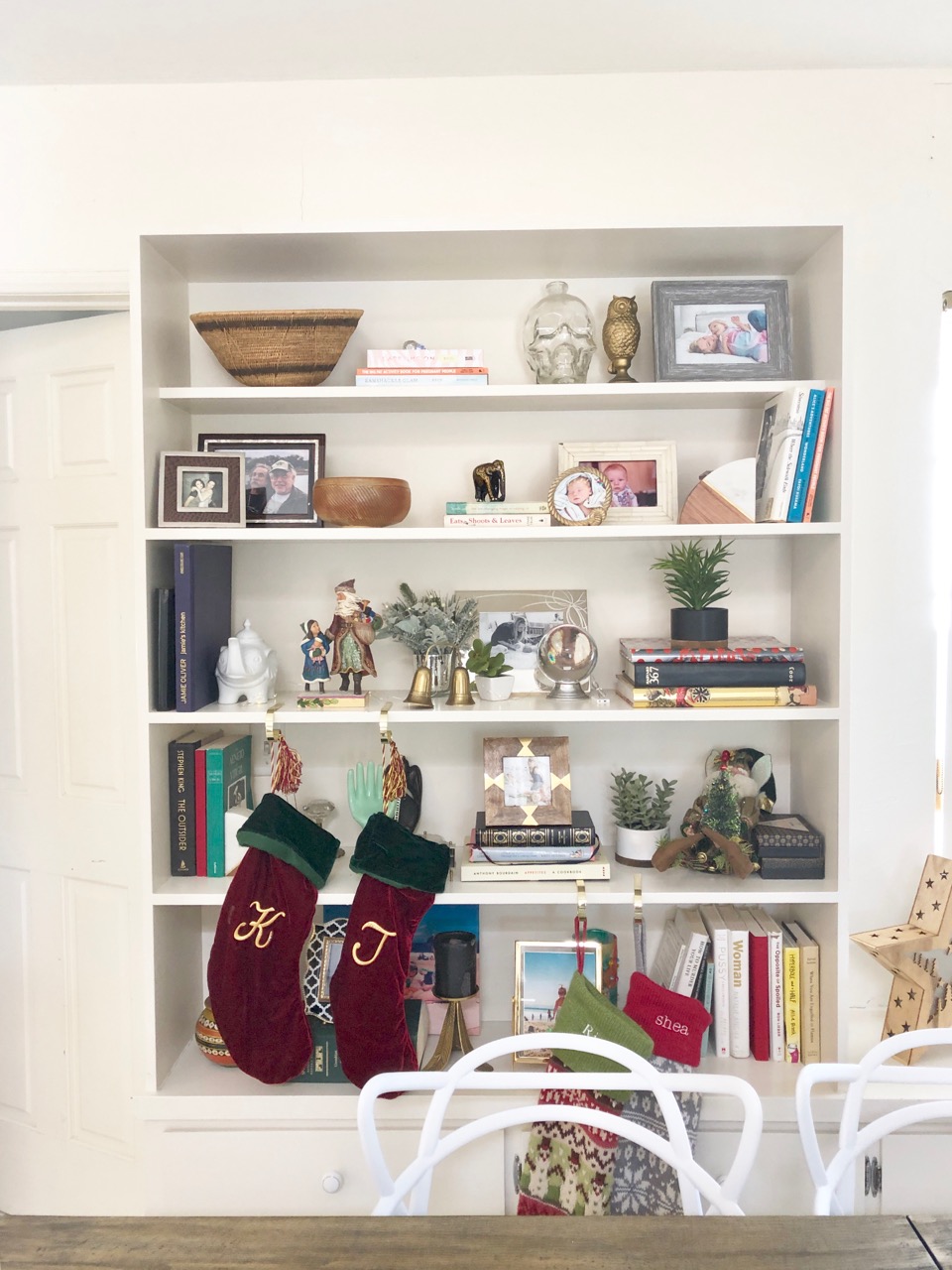 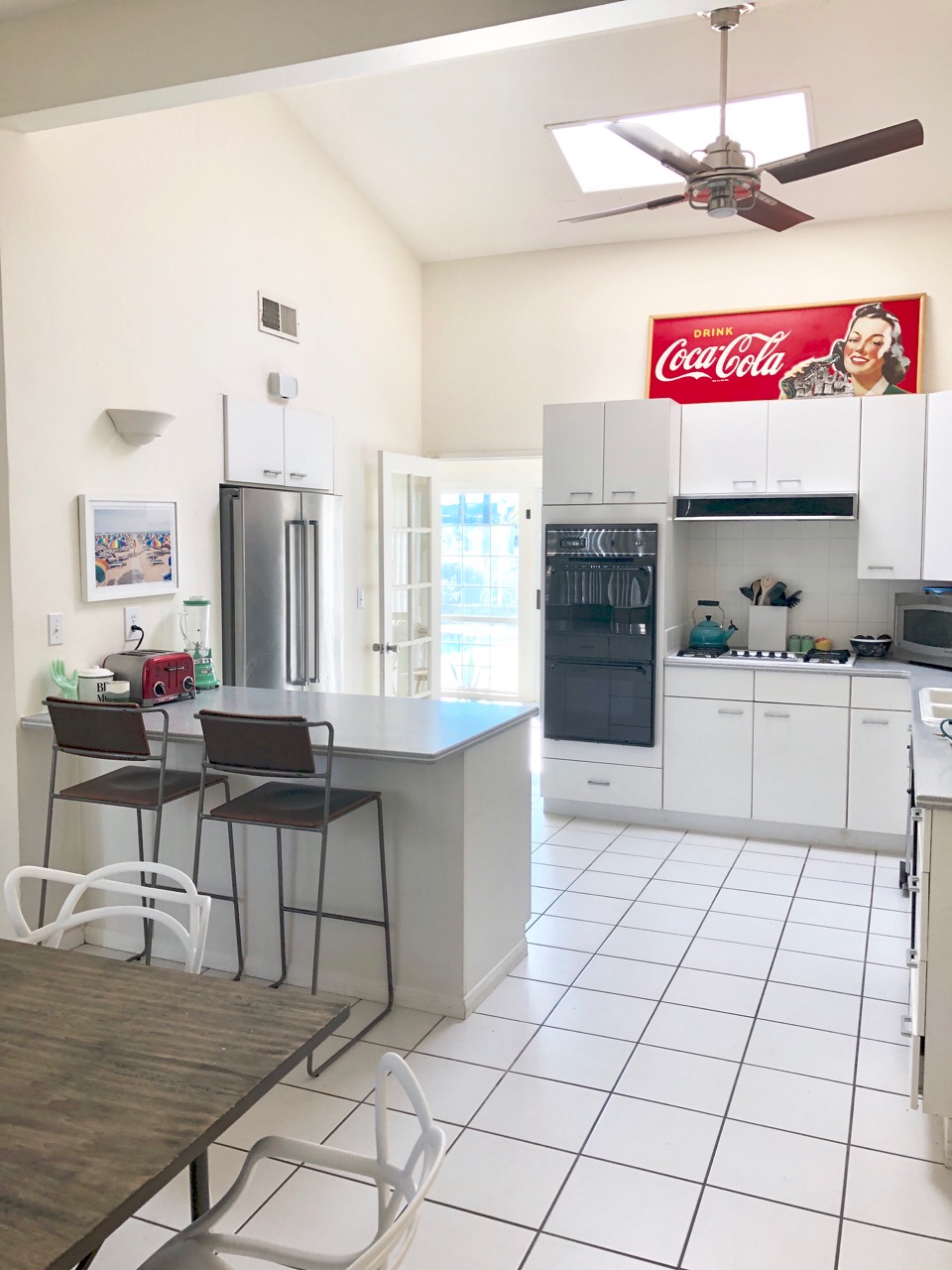 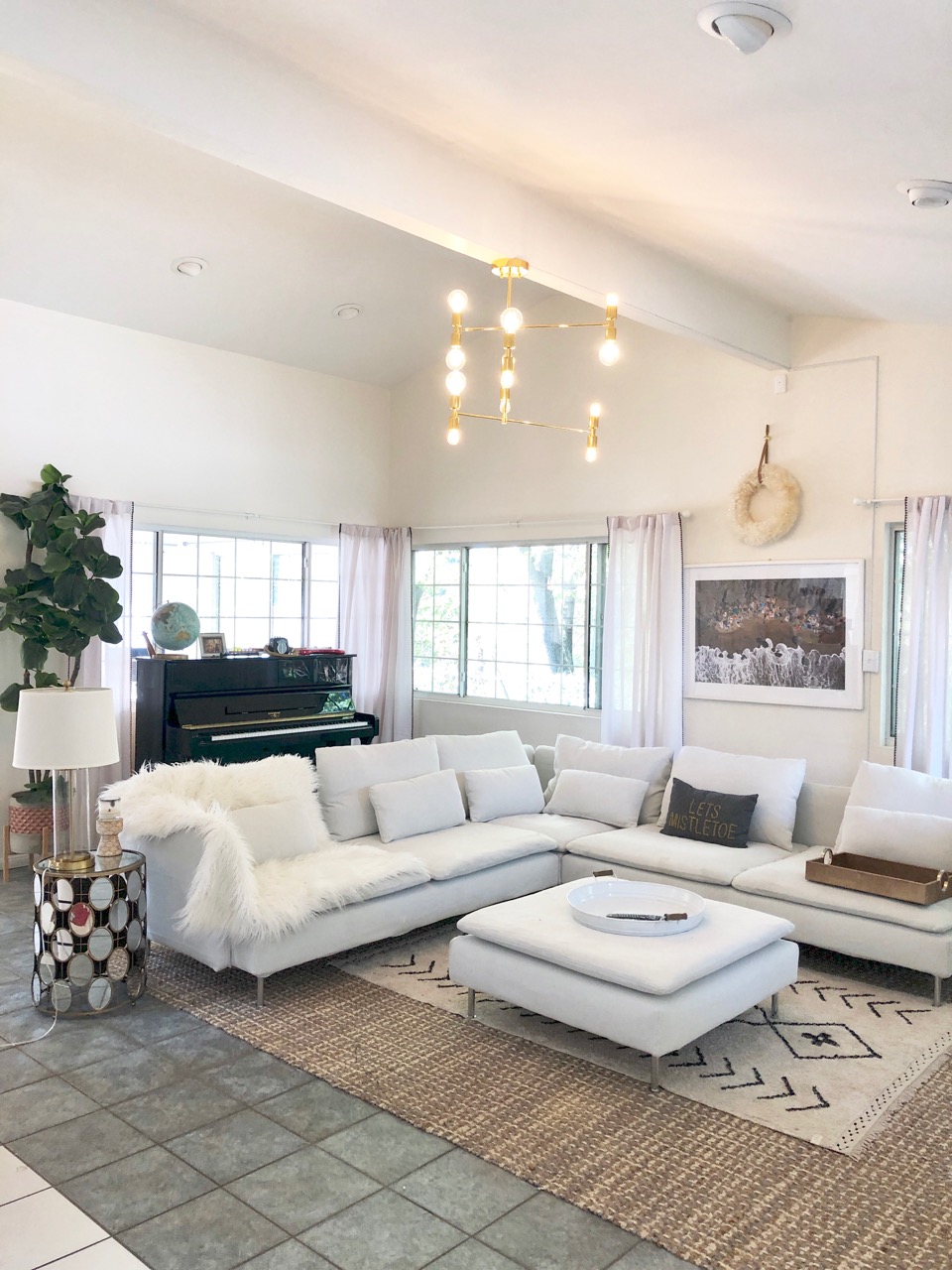 The family room – which I divided into distinct sections for the sitting area and the piano – is definitely my kids’ favorite spot in the house. Not coincidentally, it’s also the only room in the house with a TV; that was a major change I made from our old place, which had sets in the living room, garage, kitchen and master bedroom.

I’m obsessed with that Ikea couch – I hunted around a ton for a sectional that was the right size and shape, and this one was a tiny fraction of the price of the other options I considered, while looking just as nice. (And it has removable slipcovers, hence my willingness to even consider owning a white couch.) The jute rug is an indoor/outdoor rug from Target, and I layered a (machine-washable) Lorena Canals Bereber rug on top of it for a bit of texture.

This is another room where I added to the existing lighting. That chandelier is from Amazon, and is one of my favorite finds – it looks super high-end (IMO), but was just over a hundred bucks. I also installed dimmers throughout the house for extra control over the ambiance. 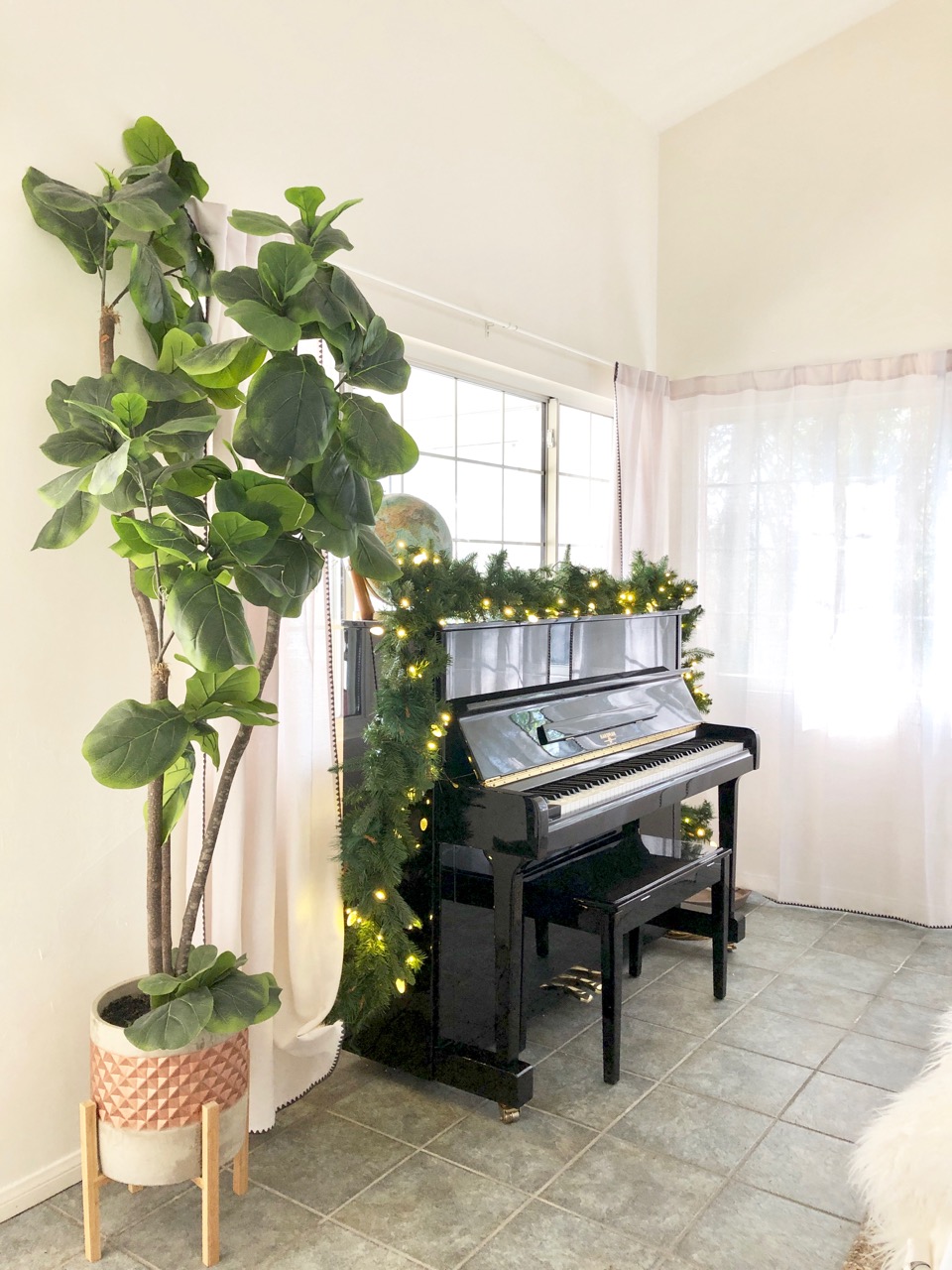 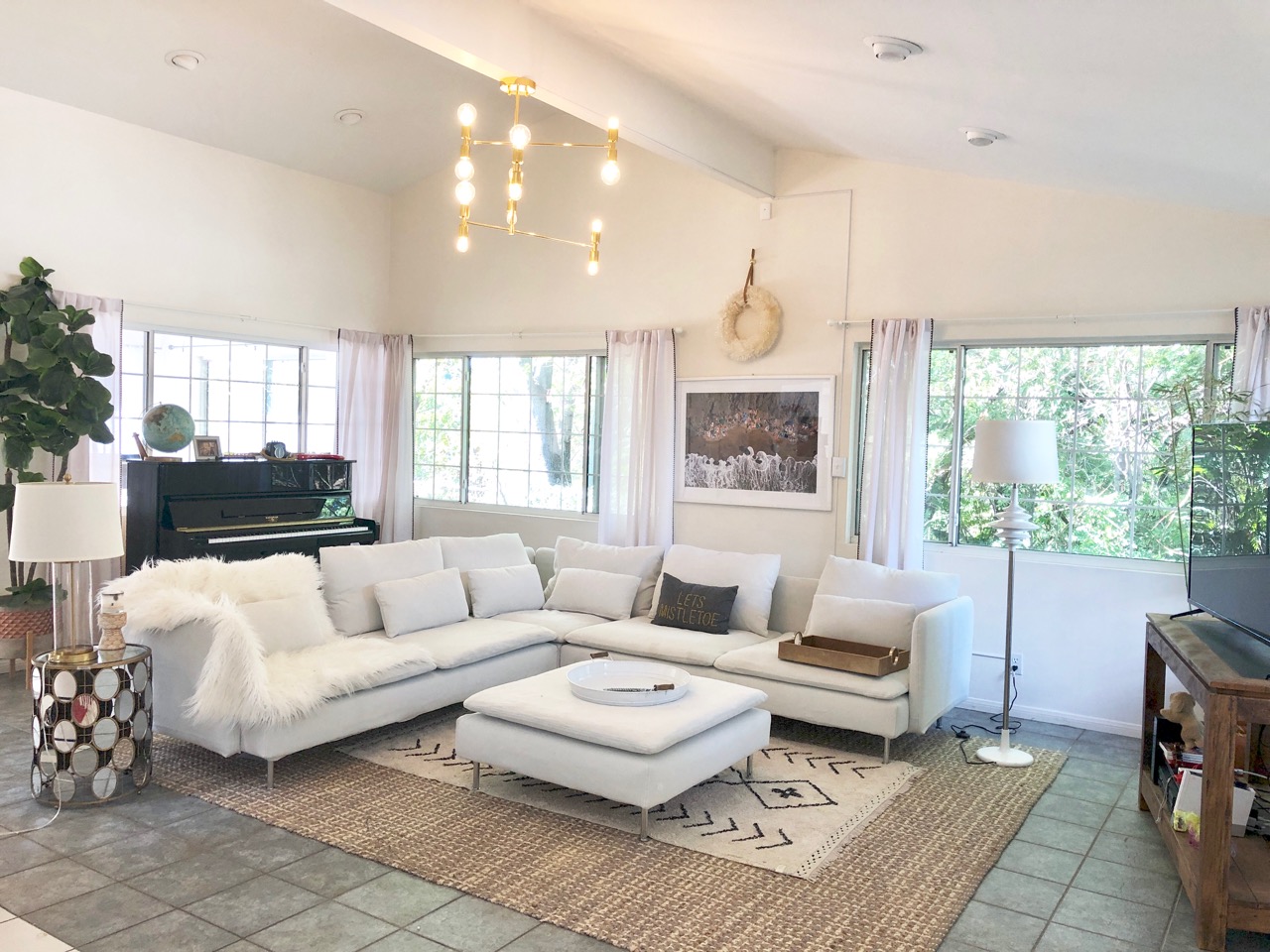 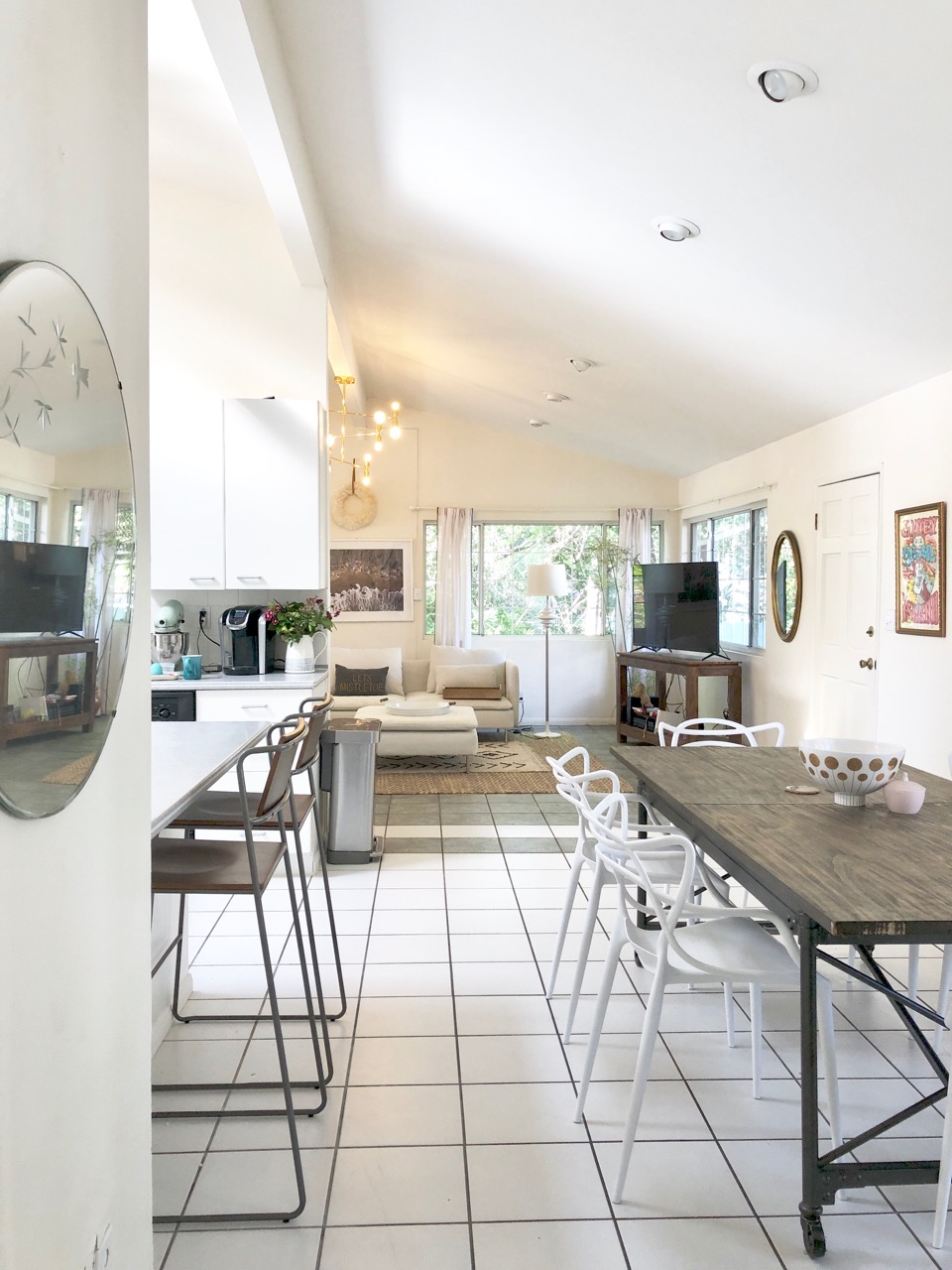 Next, a room that needs a bit of work: 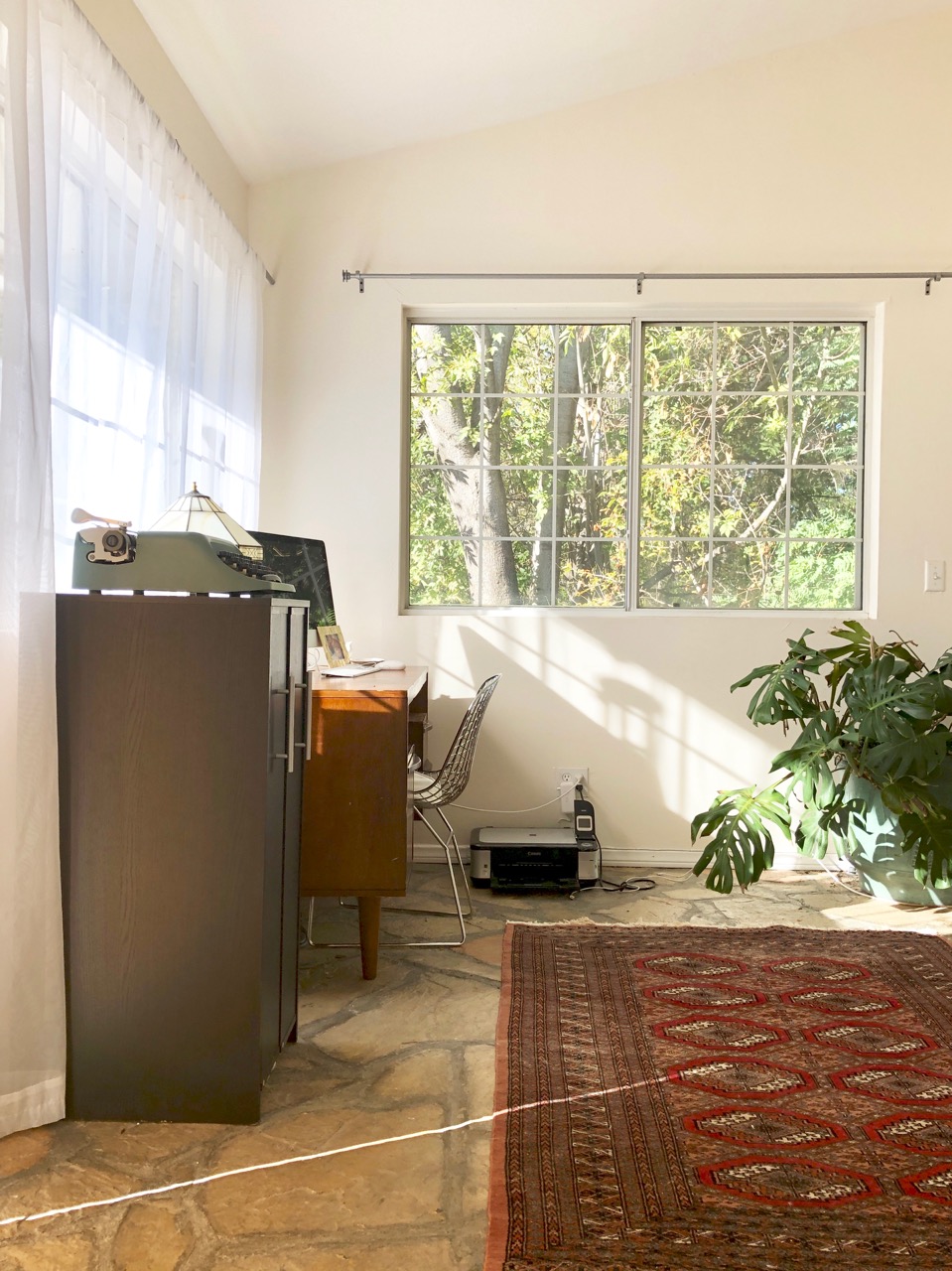 The thing about offices is that I have never actually used one, so I’ve had very little impetus to focus on making this room pretty. I’ve had a dedicated office space in each home that I’ve lived in, because it feels like…I don’t know, shouldn’t a person who works from home have a desk? Except I’ve always worked from my dining room table, so the for-real offices have largely sat unused.

My plan for this room: To turn it into a photo studio, with workbenches set up for product photography and props that I can use to transform the blank white walls into cool backdrops. 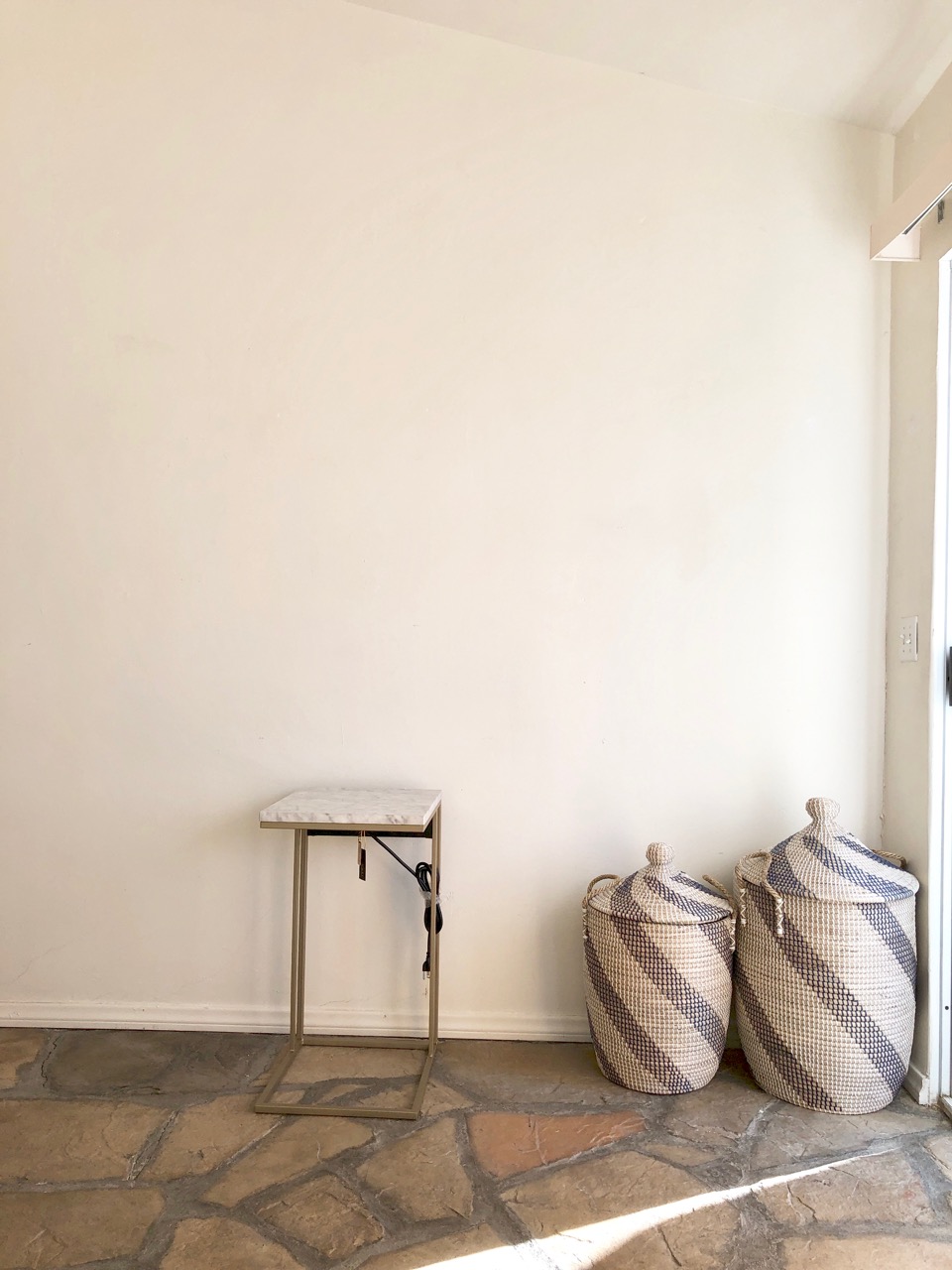 See? This wall gets beautiful light all day long, and I feel like I’ll be able to use it a ton. 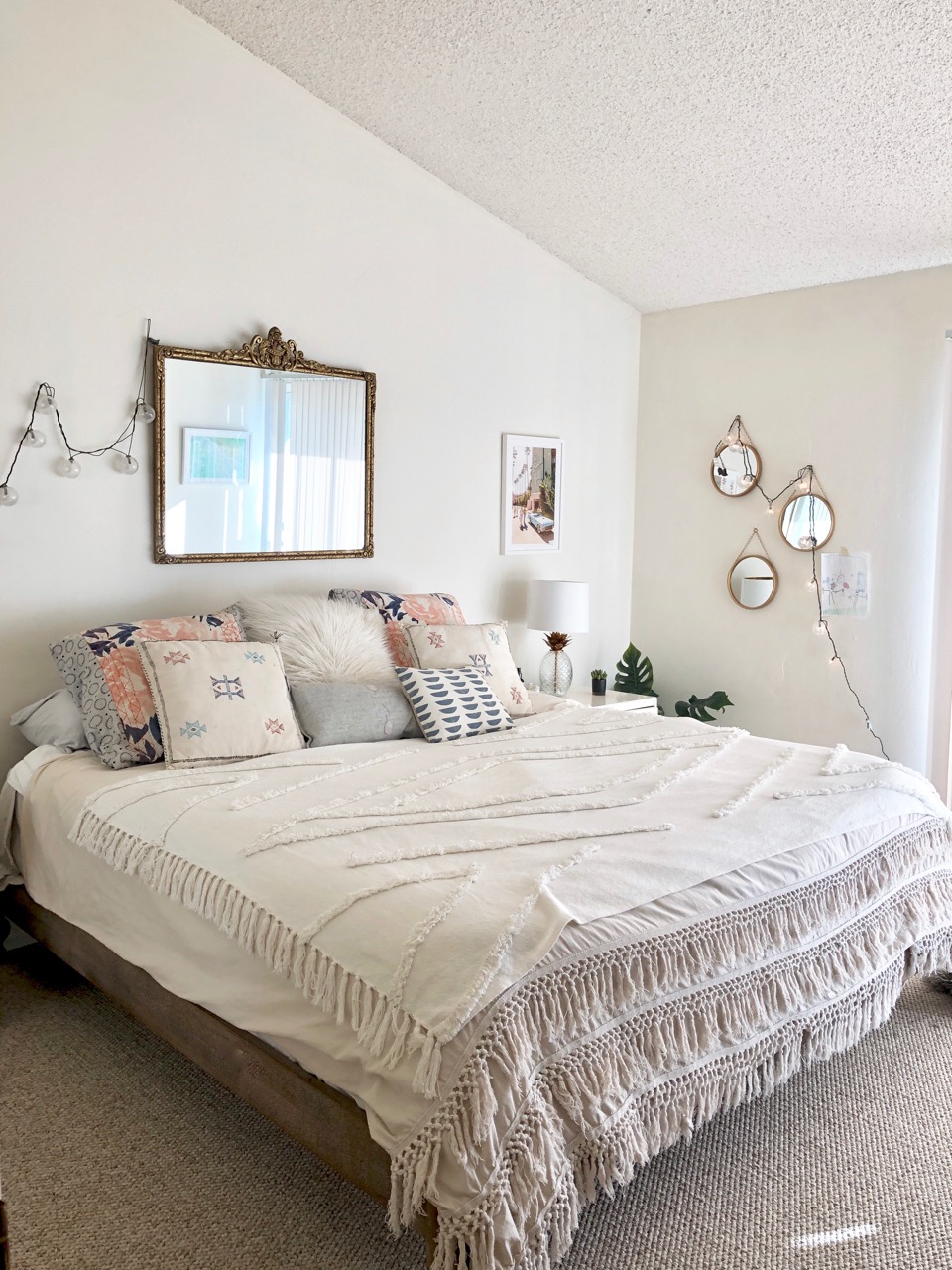 Finally, here’s my bedroom. (You can see the kids’ rooms here.)

This room is sort of the purest example of what I was talking about above, what with the embracing-of-what-I-really-care-about-and-letting-go-of-what-doesn’t-matter thing.

I love sparkly string lights still. And this is my house to do with exactly what I wish.

And so now I have sparkly lights in my bedroom. All year round. 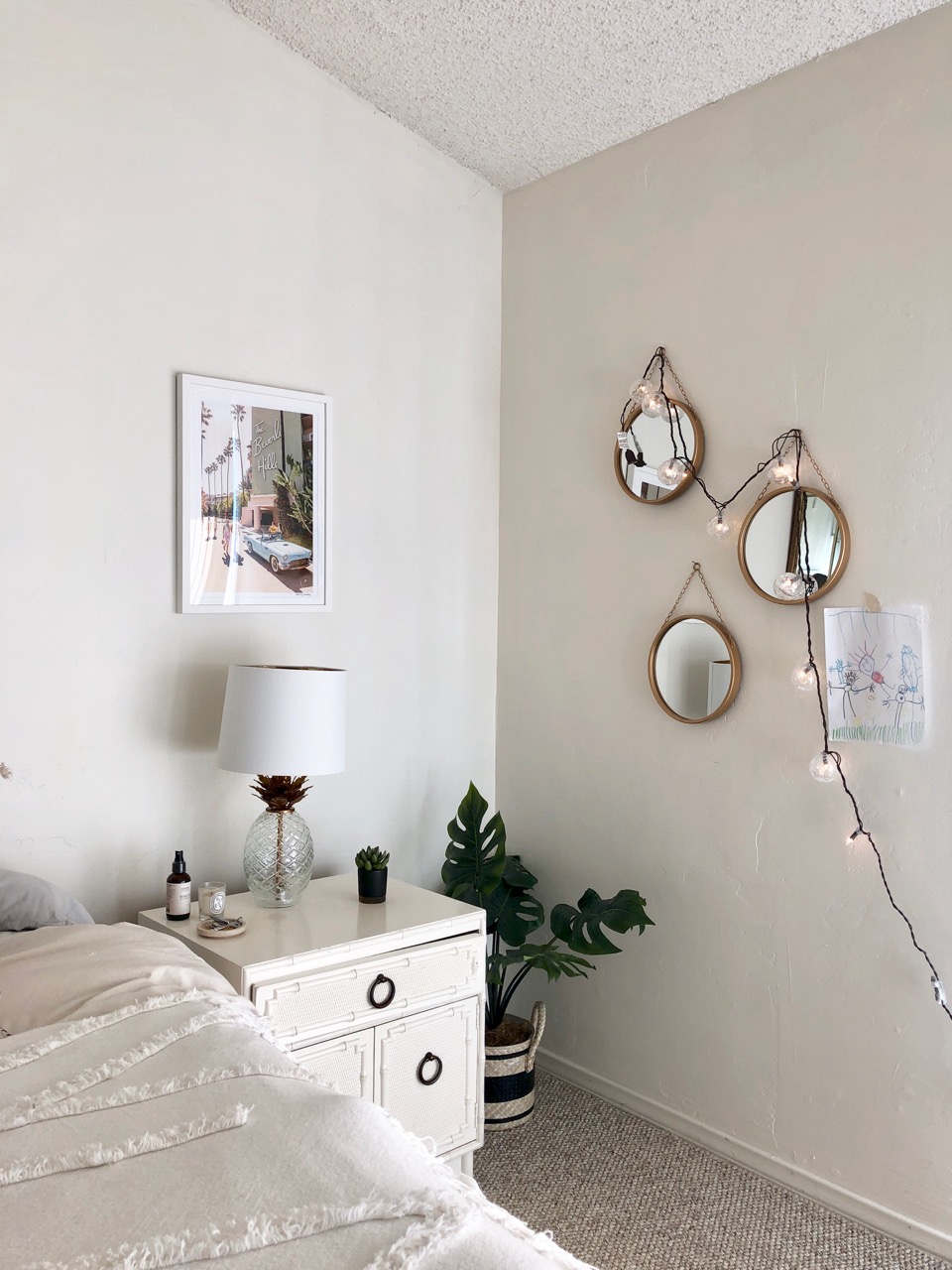 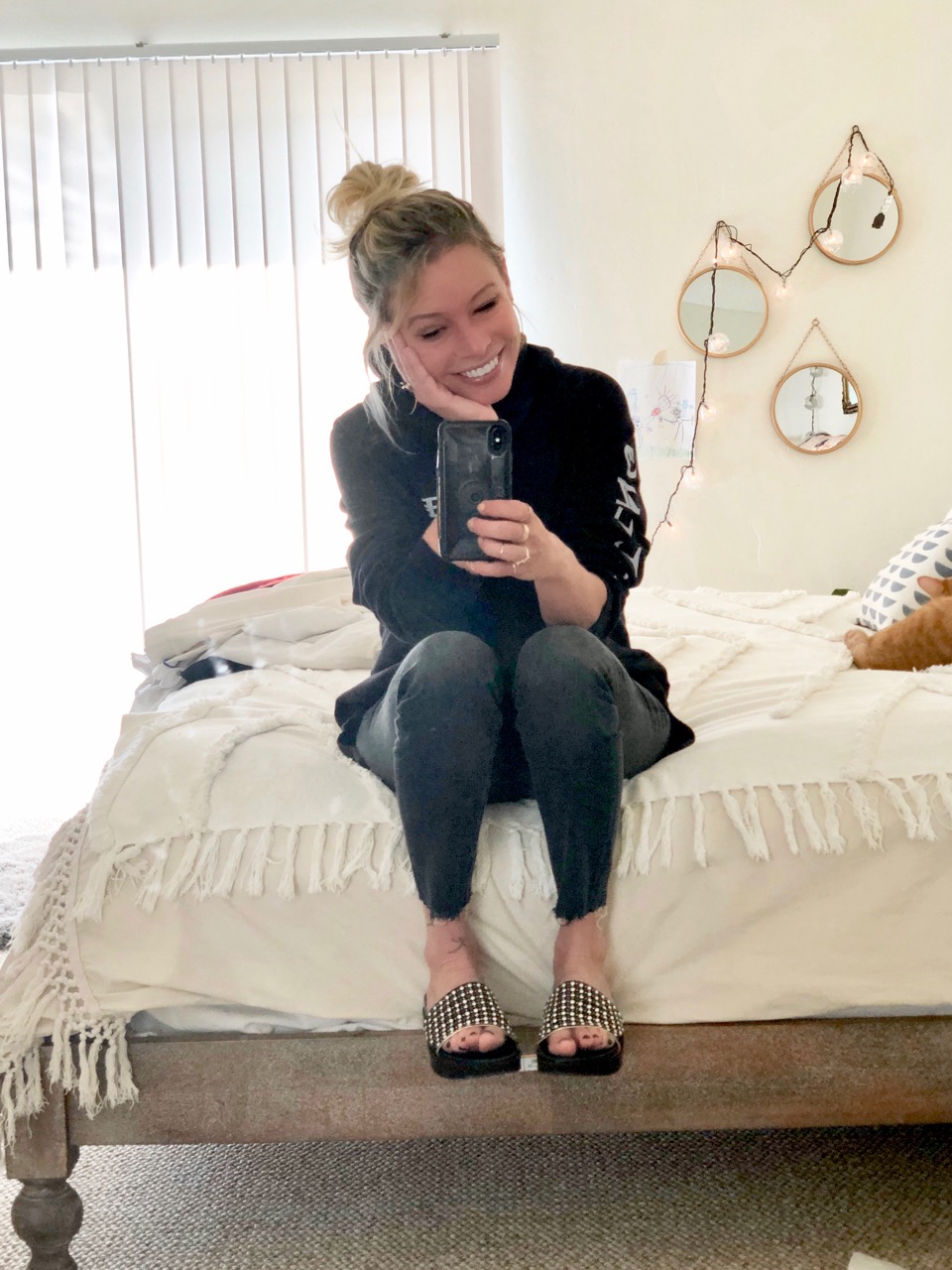