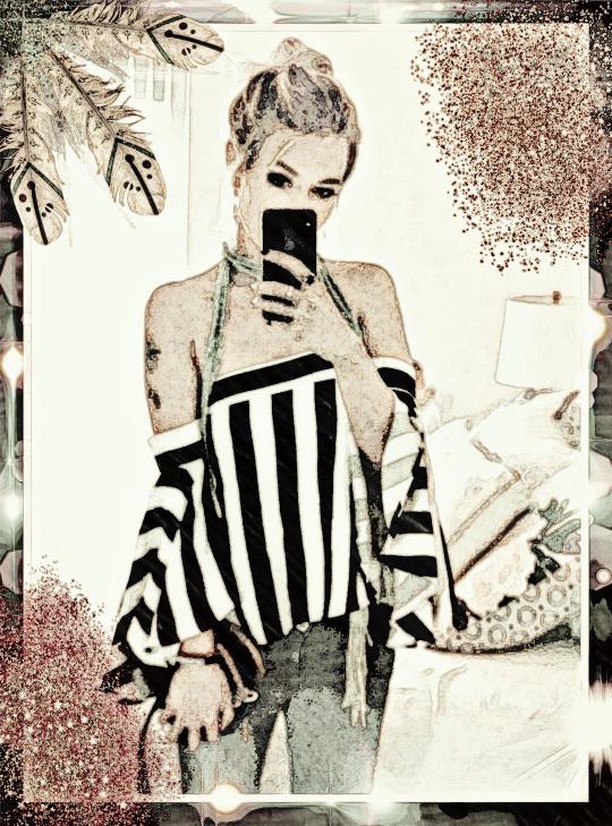 Me, in the bedroom that’s just mine. (Image by @smiechbuziak)

When I think about the first time I lived in LA – right after college, when I moved out here to look for acting work – there’s rarely anyone else there, in those memories. It wasn’t like I spent all my time alone – I had friends, and I had my boyfriend – but most of the time, whether by choice or not…I was. Me, at the do-it-yourself car wash, feeding quarters into the soap machine. Me, driving north towards Santa Barbara, then turning around when I got there and driving right back. Me, wandering through the Fairfax Farmer’s Market. Buying a donut, just to have a thing to do.

I was so lonely.

Nearly everything in my life today looks different than it did then, but here it is again, come back into my life like palm trees and the 405 freeway: The loneliness.

Isn’t it crazy how loud an empty house can be?

I haven’t really had much time to feel lonely yet. I’ve been busy, you know, what with the enormous life upheaval and the court dramatics and the move and the two young children who need schools and uniforms and lunches and something approximating stability. I have friends here – more than I’d realized. We make plans, fill up our weekends with trampoline jumps and sushi and ferris wheel rides. Whenever I have a free minute, there’s a project to fill it – a box that’s still sitting unemptied, towel racks to install, a bed to assemble. I’m grateful for the projects. They keep me distracted, and distraction feels better than its opposite. It wasn’t until yesterday afternoon that I stopped moving for a second, and all of a sudden realized – as in, fully understood – the fact that my children were not with me because there is an order that said they had to be with someone else.

Here are a few facts:

My marriage is gone. It’s not coming back.

My husband doesn’t love me anymore. Or at least not in the way he did. It’s possible no one else will ever love me as much as he used to.

My children will grow up with parents who live in different homes. They will probably always be a little bit sad about that.

My decision created holes in our life that I don’t know will ever be filled. I did that. I have to live with that.

I will have days – weeks – where I will not be with my children. I will miss them often, and furiously. Like I do right now.

These are realities that I have to accept – and I do – but still: they are hard pills to swallow.

I woke up exhausted yesterday morning. The night before, Kendrick had come to pick up the kids, and I’d gotten all excited about the idea of watching something other than Teen Titans Go. Visions of sleeping until 9 started fluttering through my head, and so I stayed up until 1:30AM watching The Haunting of Hill House on Netflix. Except then, because I am a parent and an old person, I woke up at 6AM despite the fact that I really didn’t have to, and that was that. By midday, I was the kind of tired that made me a little frenetic, and found myself pacing from room to room, half-completing every task I started and getting nowhere with any of them. And then there I was: Standing in my kitchen, crying into a ham sandwich.

I called Francesca, and she told me to just stop. Take a sick day. Close the shutters and get in bed, and spend some time doing absolutely nothing at all.

This is not a thing that I am good at doing. So we decided that instead of calling what I was doing “giving up” (my words) we’d call it “taking to my bed” (Francesca’s). I enjoy that phrase enormously; it sounds very glamorous and French, like perhaps one has acquired a touch of cholera, or maybe a hint of consumption. And you can’t be held responsible for anything you do when you’ve acquired a touch of cholera or a hint of consumption.

Around 4PM, I took to my bed. I put on Netflix and stole a bunch of mini Butterfingers from my kids’ Halloween stash, and for two entire hours I did nothing.

It got dark early; daylight savings, you know. When I got up I went into the backyard, and sat down, and realized that I didn’t want to launch myself into the process of catching up from a day largely wasted. I didn’t want to do any of the things I would typically do while sitting in my backyard (check my phone/call a friend/water the plants/et cetera). I just wanted to sit there. Think.

For some reason this one day kept running through my mind: A day before our daughter was born – our son was maybe one and a half. We decided to take a drive up to a farm we liked. We bought sandwiches and ate them on a picnic bench, and when we were done I took my son’s hands in my own and swung him back and forth, around and around, while he giggled like a little maniac and Kendrick took photographs of us. It wasn’t an especially exciting day; I don’t know why it got stuck in my head. I suppose I just remember feeling, that morning, like life would always be that way: the three of us, together, laughing and spinning in the sun, nothing to do but decide where we want to go next.

I wrote this post in the morning. And in the afternoon, Kendrick came over to grab some things before picking up the kids at school. We decided to go pick them up together, and then take them to ice cream. When our son climbed into the car, he stared at us for a minute.

It’s been a long time since we’ve done this, he said. Drive with both of you in the same car.

We picked up our daughter next, and then we drove to Baskin Robbins. We sat there in our plastic seats with our plastic spoons, our son explaining a coding game he’d just learned and our daughter chattering away about ice cream cakes. It wasn’t perfect – Kendrick and I got on each other’s nerves, and snapped at each other once or twice – but still.

When we were done and headed back to the car, my daughter clung to my legs for a moment and asked me if I was going to get in the car, too. She wanted to know if next time maybe I could stay longer. I told her I would. And I was telling her the truth: I think I can, and I think we will. So I buckled her in, sat down in the passenger seat of the car that was once ours and is now just his, and we – the four of us – decided where we wanted to go next.