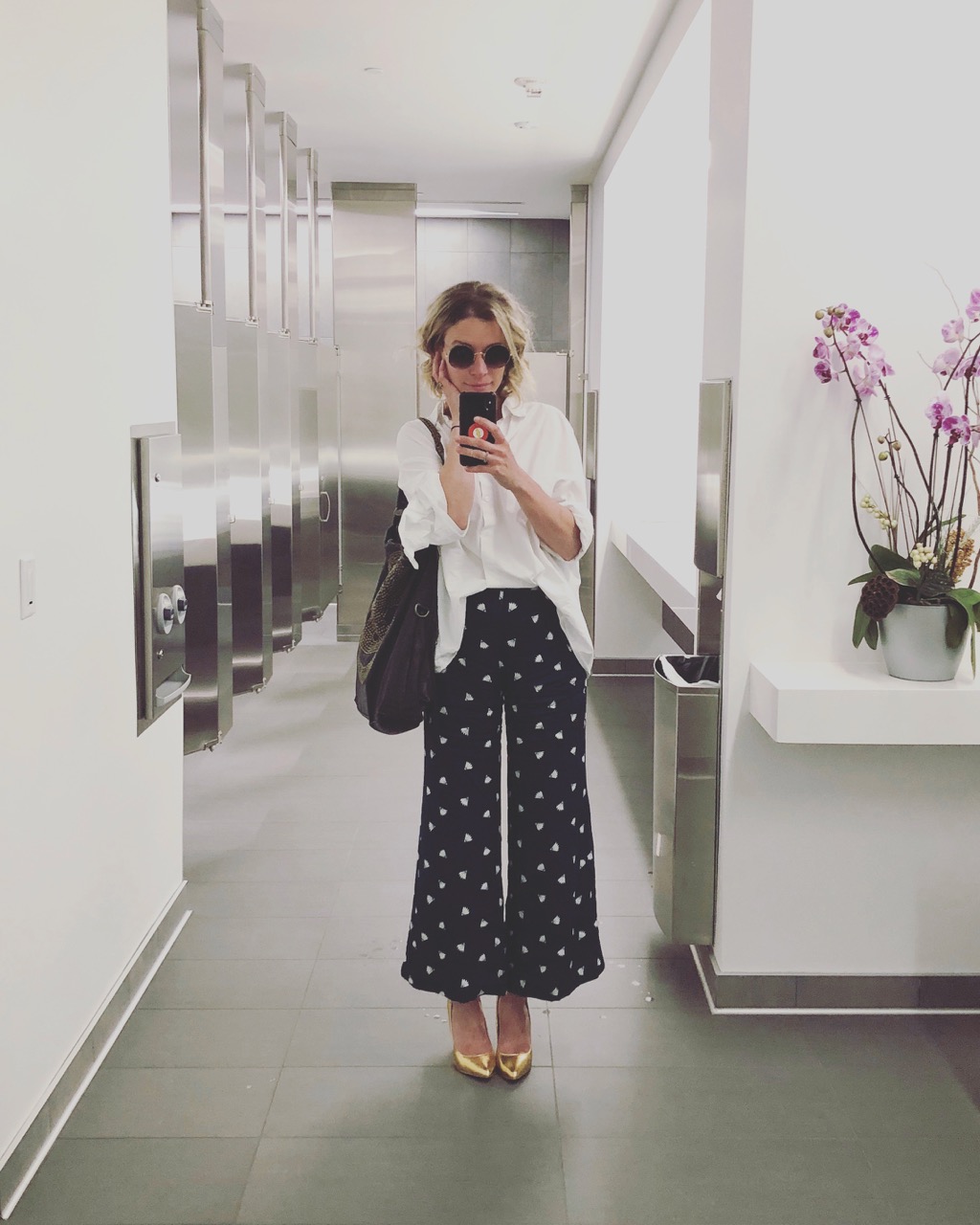 eBay bathroom selfie featuring the outfit I never want to take off lately (pants – part of a two-piece set – here, shirt here, shoes here). P.S. That tampon dispenser is definitely looking at me.

I just added this (super cute and way affordable) round rug to our living room, layered on top of another rug, and I’m obsessed. (Especially obsessed with the fact that it’s technically an outdoor rug, and thus extremely durable and resistant to disasters of the child-and-pet sort.)

The fact that I saw the title of this article and said “Ooh!” and immediately clicked over confirms my suspicion that advanced age is making me boring. I’m ok with that. (7 Surprising Things You Can Do With Cream of Tartar, via The Kitchn.)

My friend Katie has these spectacular shoulder-skimming earrings, and I think they may need to come to live with me, too.

In my purse right now: this cult-favorite universal balm, which has a hundred and one potential uses.

The bath bombs by Sky Organics are SO MUCH FUN – they have things like glitter and rose petals (and even toys) embedded in them, and turn your bathwater crazy colors. They are also literally the only thing that can convince my daughter to take a bath, so they’ve become a household essential over here.

I write about (and shop on) consignment sites all the time, and this article neatly sums up why I’m such a huge fan: it’s not only good for your wallet, it’s good for the planet. (What You Save By Shopping Consignment, via TheRealReal.)

I did one of those genetic testing kits – the one from 23andme – and it turns out I’m 49.6% Ashkenazi Jew (and 50.4% European mutt). I also found out that I do not carry the BRCA1/BRCA2 genetic variants, but that I do carry one of the variants for late-onset Alzheimer’s. All of this is good information. (FYI, 23andme is offering 30% off of kits through April 25, which is apparently “DNA Day.”) Update: A reader who works in medical genetic testing wrote in to let me know that 23andme (and similar) tests should be used for entertainment only, and should not be considered accurate in terms of detecting and diagnosing medically important genetic variants. The site definitely upsells you on the BRCA/Parkinson’s/Alzheimer’s testing, so proceed with caution. 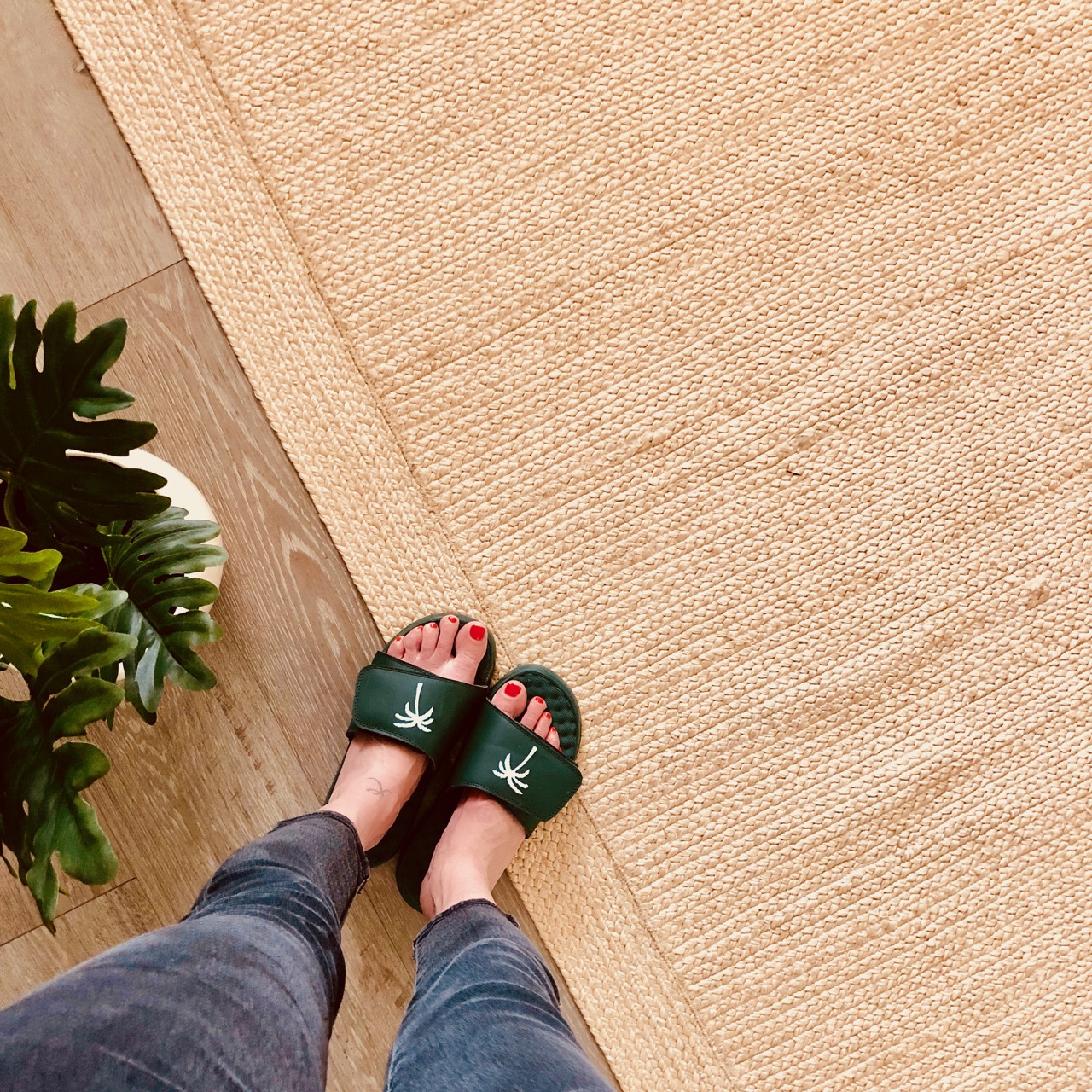 In my spare time, I design adorable sandals. (Kidding, sort of: These are customizable slides from iSlideUSA – you just tell them what color and what image you want, and presto.)

The answer to most of these is “much more than you thought.” (How Often Should You Clean Your Sheets (& Other Things Around the House), via Food52.)

The Happiest Baby on the Block guy is now selling a $1,200 vibrating bassinet. It totally has the feel of snake oil, but I’d be lying if I said I wouldn’t want one if I had a baby right now. (How Harvey Karp Turned Baby Sleep Into Big Business, via NY Times.)

Suuuuuper into Kiehl’s Ginger Leaf & Hibiscus Firming Mask at the moment – it’s one of those masks that you leave on overnight (which I love), and I find the texture of this one to be just about perfect: it’s thick enough that it coats your skin and works all night long, but not so heavy that it feels gloppy.

Speaking of masks: I stopped into a K-beauty shop in New York called The Face Shop, and bought this (among other things; I was total kid-in-a-candy-store in there and spent way too much money). I’m nervous to try it, because my skin is sensitive and doesn’t always react well to unfamiliar new products and omgggg this mask looks so weird, but come on: I HAVE TO. Probably while videotaping myself in the process. I mean, look at it.

I like Givenchy, generally speaking. I do not like this. (Related: Balenciaga makes the actual ugliest footwear ever created.)

Do you enjoy Cards Against Humanity? Are you also a parent? Get these.

The answer to this one isn’t always as obvious as it may seem. (To Rent or to Buy: The Great Home Ownership Debate, via Curbed.)

If you’re in the Bay Area and have kids, you have to check out The Binkees: they’re a punk band that plays kids’ songs (think: This Old Man, The More We Get Together, She’ll Be Comin’ Round The Mountain, etc), and you can book them for birthdays and such…and they’re so much fun.

My friend just told me about the VivoFit Junior – essentially a FitBit for kids, but even cooler: these things are waterproof, have a year-long battery life (so no charging required), and apparently incentivize kids to get active…and do chores. What. 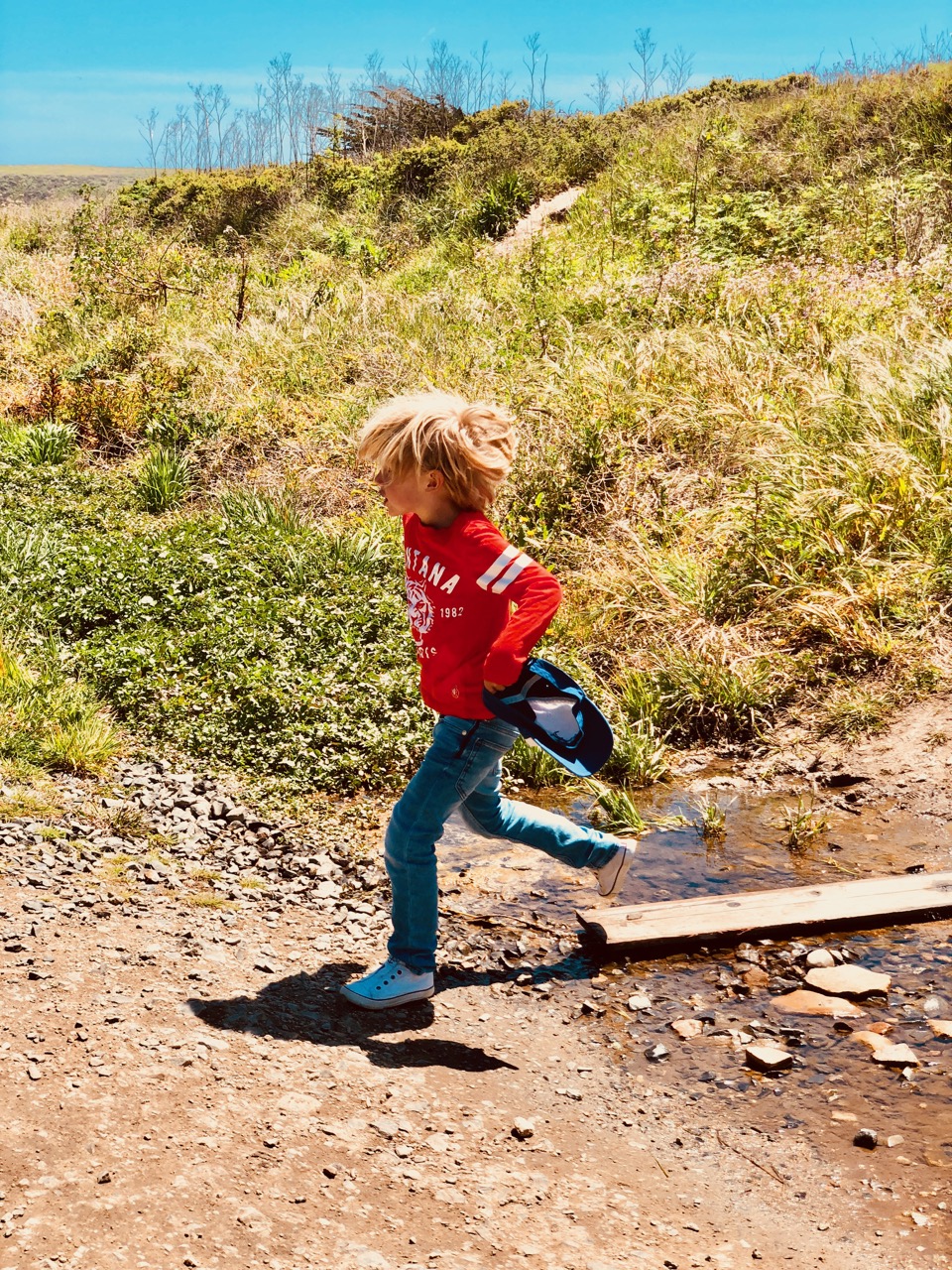 My son refuses to wear any pants that don’t fall into the category of “soft pants.” I HAVE FOUND JEANS THAT COUNT AS SOFT PANTS. (If you are a parent of a child with extreme fabric pickiness, you get why I’m celebrating over here.)

Looooove all the circular rattan purses I’m seeing everywhere these days. J.Crew’s is my favorite – and they’re offering 30% off plus free shipping on online purchases (use code GOSHOP).

Just FYI, because you need to know this: Frozen grapes make the best snack. Even my daughter thinks so. (“They taste almost like ice cream, even though ice cream is better.”)

Hideous. (This is the World’s Most Instagrammable Hotel, via PopSugar.)

This Gucci dress is a total work of art. As it should be, considering it costs as much as a new car.

“Got this for the mother-in-law for bath time, hoping it’d be crap and her Kindle would slip out and electrocute her. So far, the bloody thing is staying in one piece. Great for waterproof Kindle-ing, crap for murder.” (17 Outrageous Amazon Reviews That Will Make You Whisper to Yourself, ‘Oh My God,’ via Buzzfeed.)

This is insane and fascinating. (Sea Nomads Are First Known Humans Genetically Adapted to Diving, via National Geographic.)

Aaaaaaaand finally: this. (A Comedian Broke His Penis and Wrote A Book About It, via CNN.)