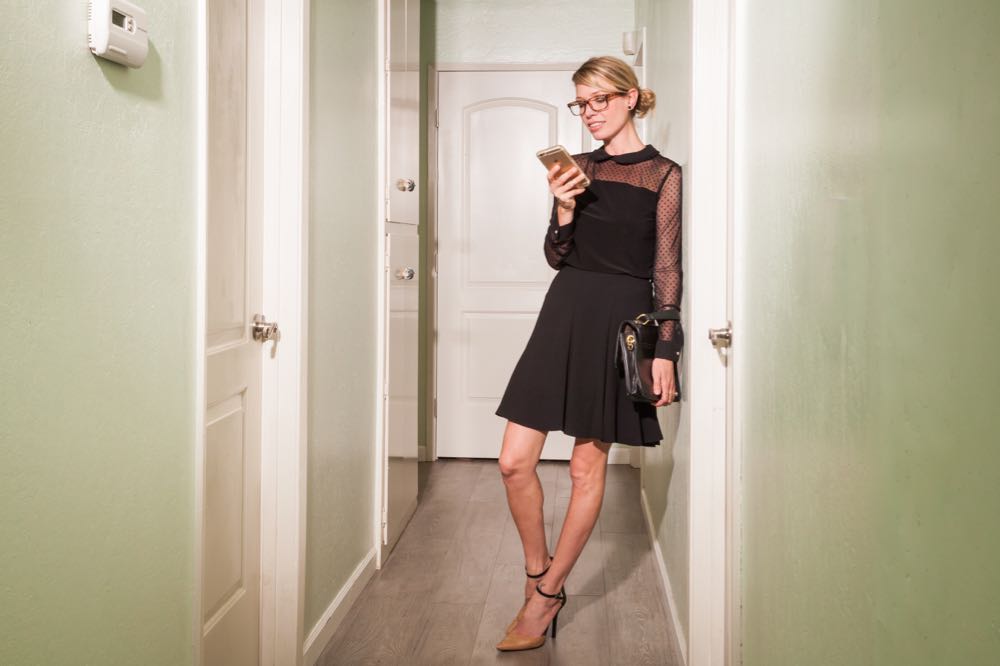 My hallway before I made it awesome.

I painted my hallway green before we moved into our house (or even saw it in person). I did this to a lot of things in my house, actually – painted them, tore them out, replaced them, et cetera – before we first stepped foot in it, because we bought it over FaceTime and I wanted to get as many of the bigger projects as possible done before we drove across the country and had to actually live in the place.

Sometimes this remodeling-via-WiFi turned out pretty well for me – with our light-grey floors, for example, which I continue to love – but the green hallway I regretted almost instantly. The color, which I’d envisioned as a cool mint, was a touch pea-soup-y in the non-existent light, and worked much better in my daughter’s room – the spot I’d initially chosen it for.

So I painted the hallway white again. 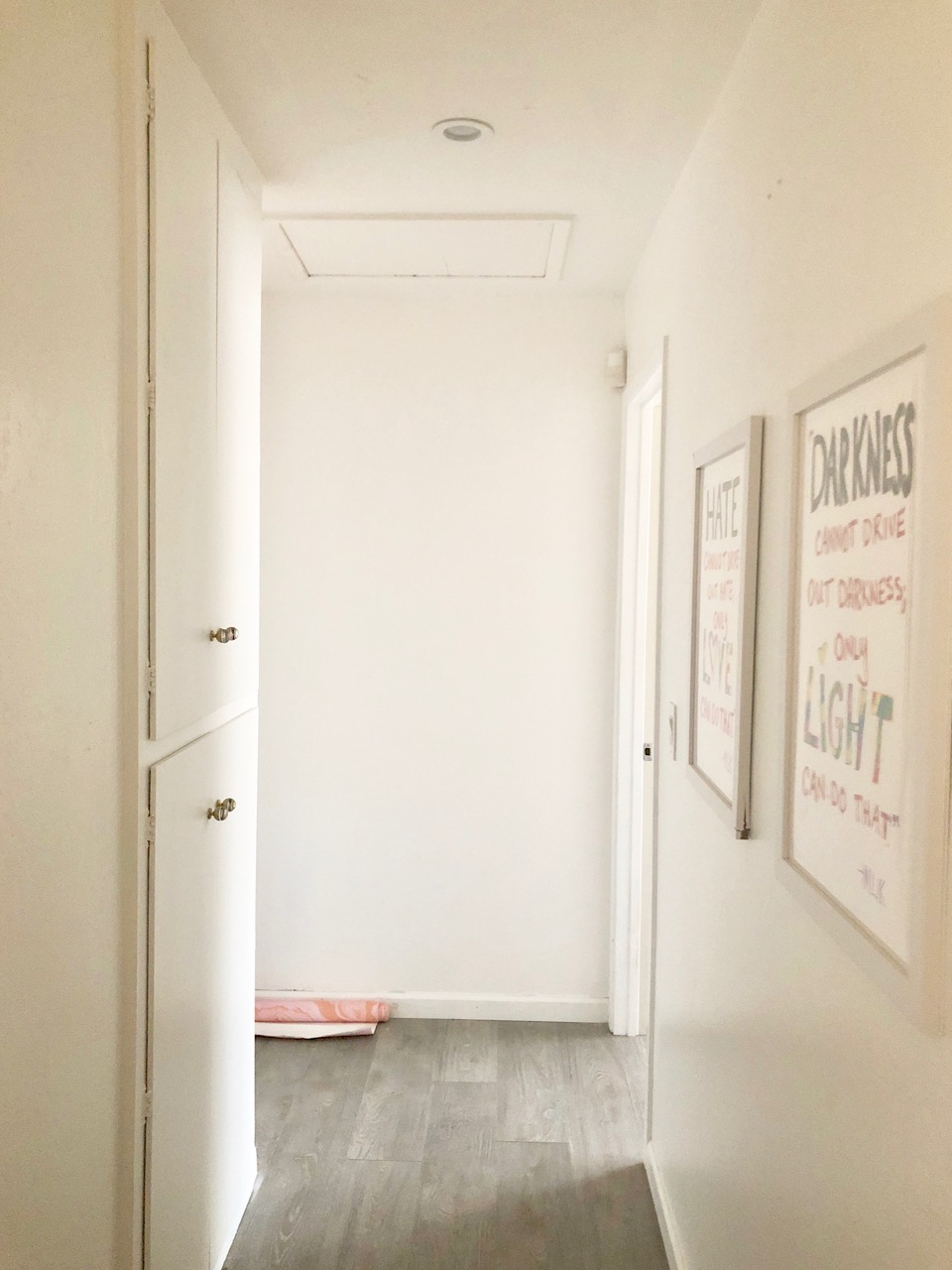 I put the posters my son and I carried at the Women’s March in frames, and hung them along one wall. I replaced the generic ceramic cabinet knobs with black-and-white marble pulls that sparkle. I took out the closet at the end of the hall, and incorporated the space into the walk-in in my bedroom.

Then, a couple of weeks ago, I went on a bit of a wallpaper kick and covered my daughter’s walls with baby bunnies and deer and hummingbirds. While I was at it I started thinking about how I had that sample of Sarah Sherman Samuel’s Pink Marble wallpaper laying around, and how it was exactly the right amount to cover the narrow wall at the very end of my hallway.

I had a friend hold up the sample against the wall while I looked at it from the far end of the hallway. “I don’t know,” I said. “It’s a lot.”

My friend and I switched places so she could see. “It’s really…pink,” she said.

It is, indeed, pink. And it is a lot for a large, central area, but as a focal point at the end of a long, boring hallway? …Maybe? Anyway, I reasoned, this particular wallpaper is stick-on, making it easy to remove should it end up being, in the end, not only “a lot,” but much too much.

Except once it was up, I decided it was just enough. 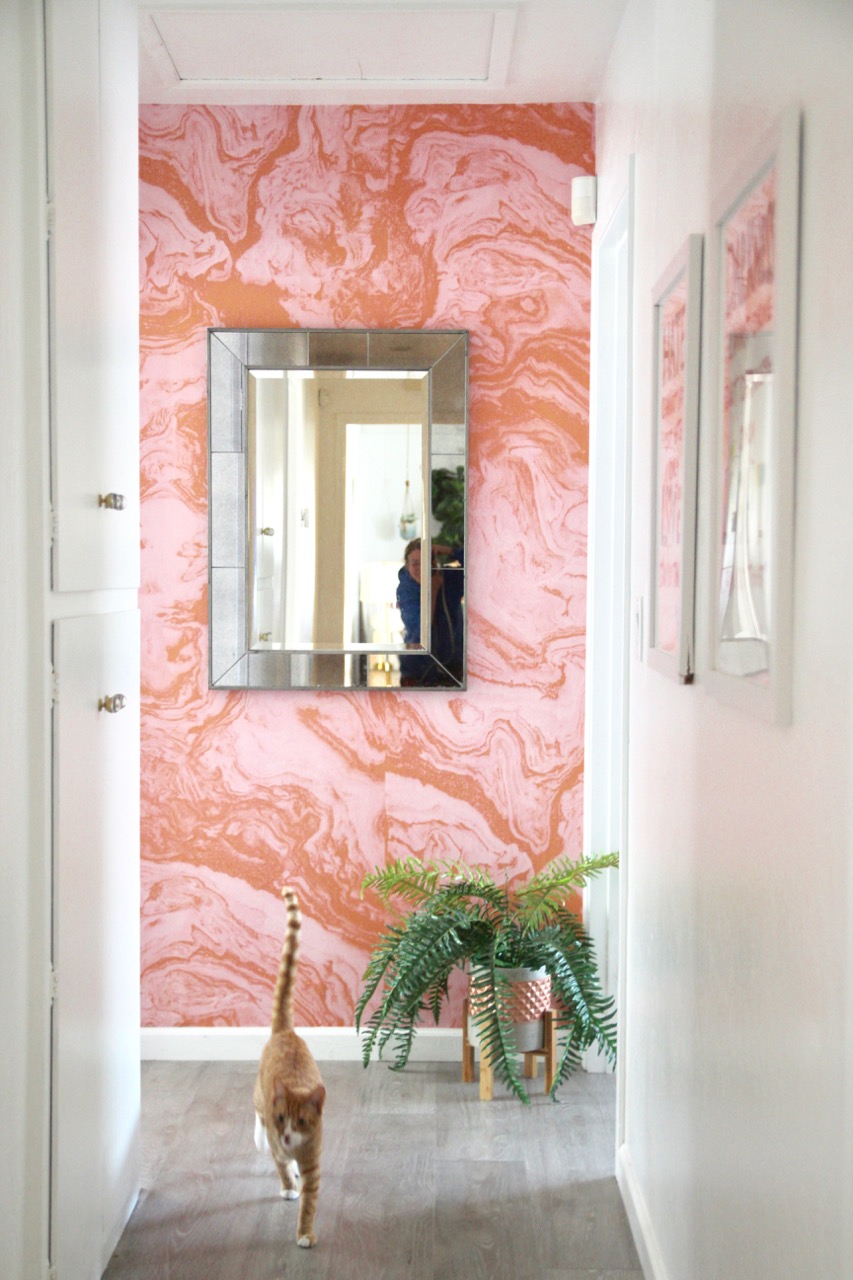 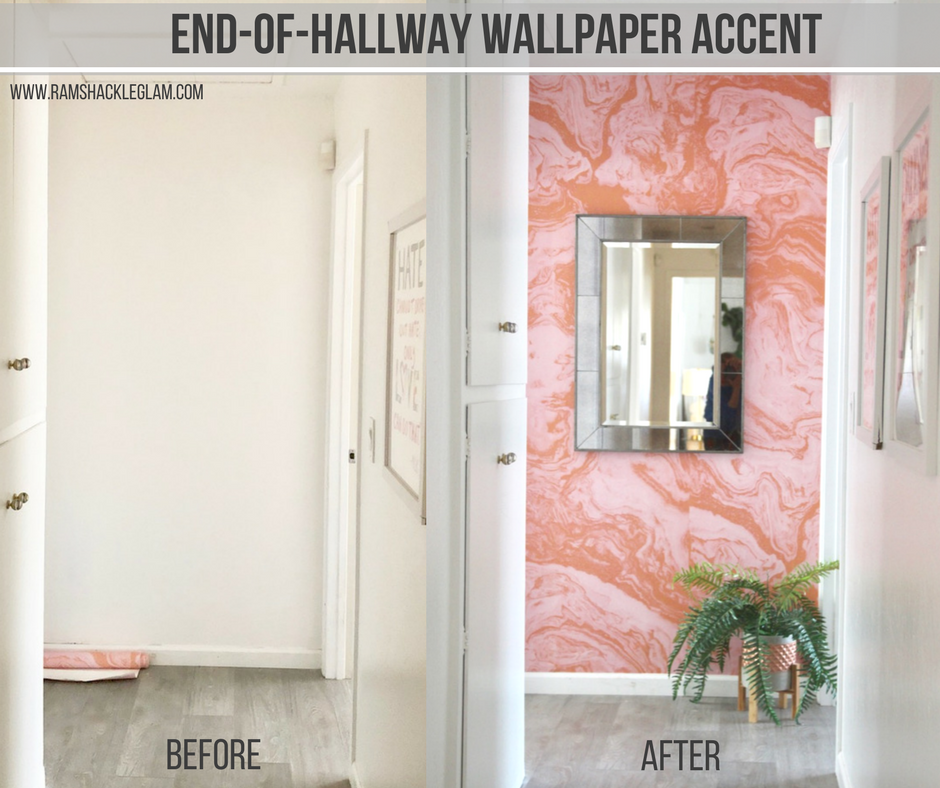 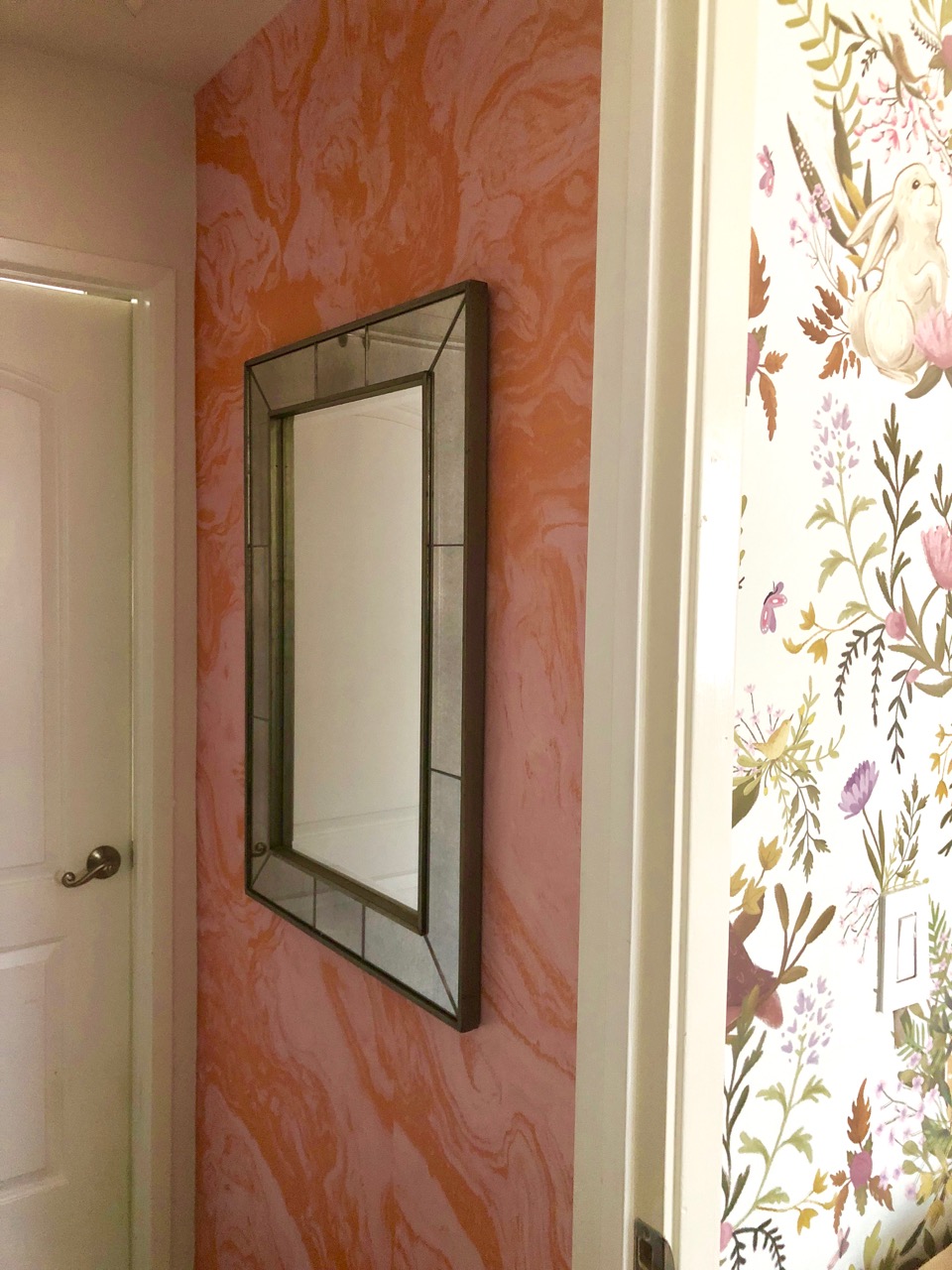 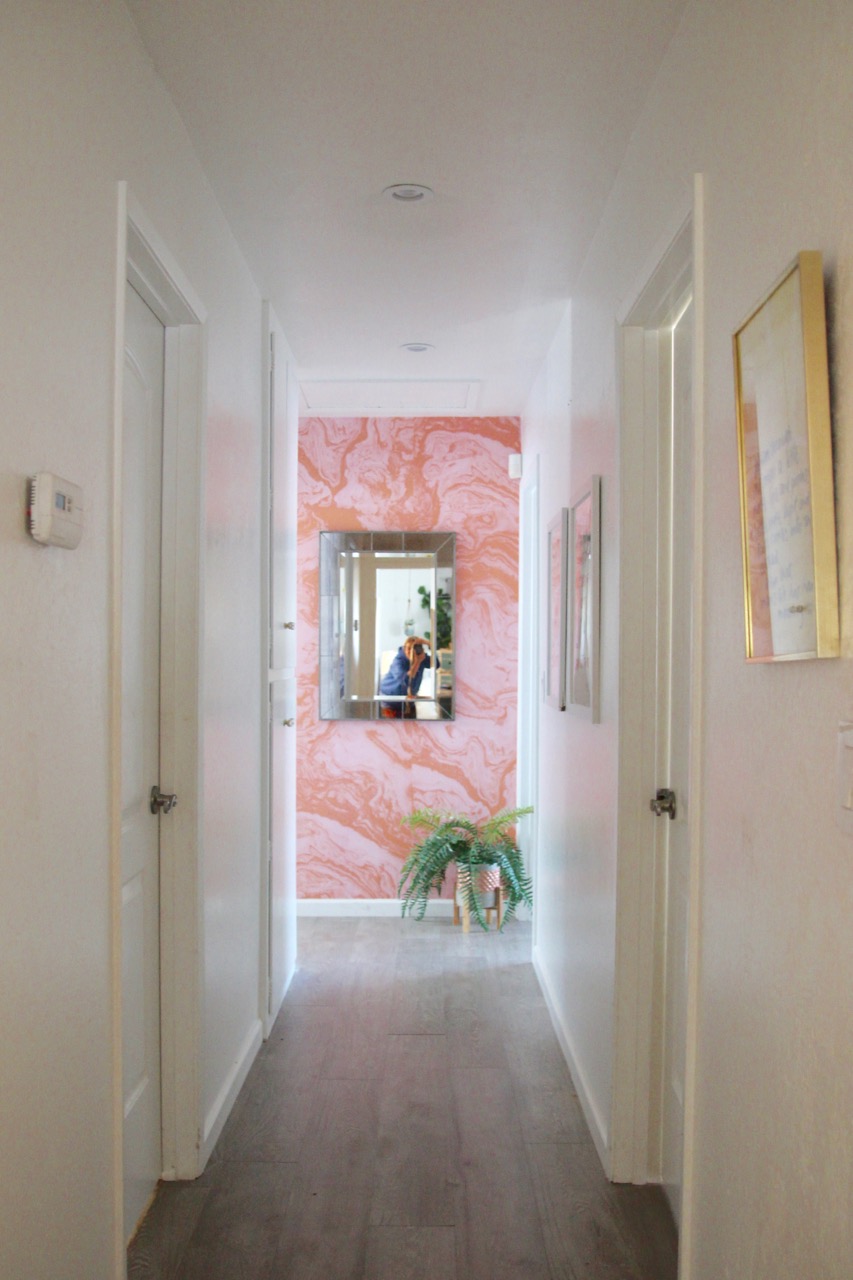 P.S. If pink isn’t your thing, below are a few more bold, retro patterns that I love just as much.