10 Wallpaper Murals You Have To See 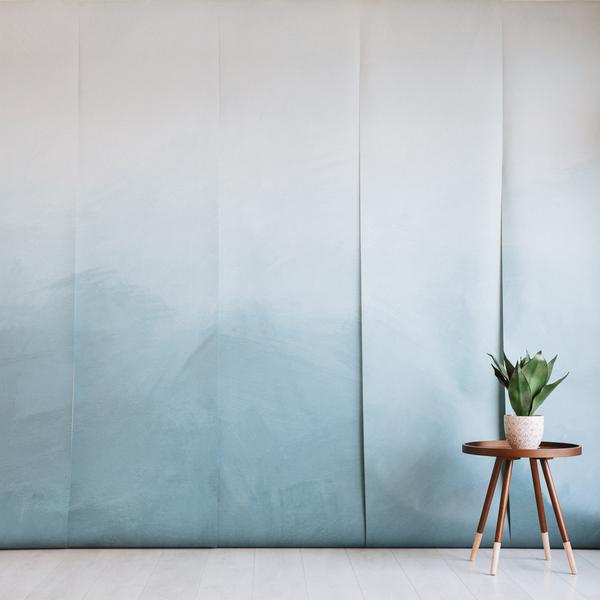 Now that I’ve shown you my daughter’s made-over bedroom, I wanted to talk mural-style wallpaper in general – because personally, it’s not something I’d ever considered before…but now I totally get the appeal.

What is mural wallpaper?

While most wallpaper patterns can go on indefinitely and just have to be matched up seam-by-seam, mural wallpaper contains a finite number of panels and shows a distinct scene.

Mural wallpaper is perfect, in other words, for a statement wall (or two) – but does present some issues if you want to cover a space longer than a single mural, as you’ll have to make sure the first panel of the second mural matches up with the last panel of the first mural, or shorter than the mural, because it might end up feeling sort of truncated. (I love how the woman I hired to hang the wallpaper dealt with the latter issue: by letting the print sort of bleed onto the next wall, as if the animals are hopping right off the paper.) But in the right spot – and especially in kids’ rooms, which mural wallpaper feels practically made for – they can be spectacularly unique and striking.

Something you can’t really get away from: Mural wallpaper can be expensive. Cheaper versions are certainly out there, but a look around the Internet showed me that this is one of those areas in which design quality goes significantly up with price. And that’s a little annoying, yes, but consider this: How much would you spend on a piece of artwork that visually anchors a room, virtually eliminates the need for additional wall decor, and is flat-out awesome in every way? There you go. 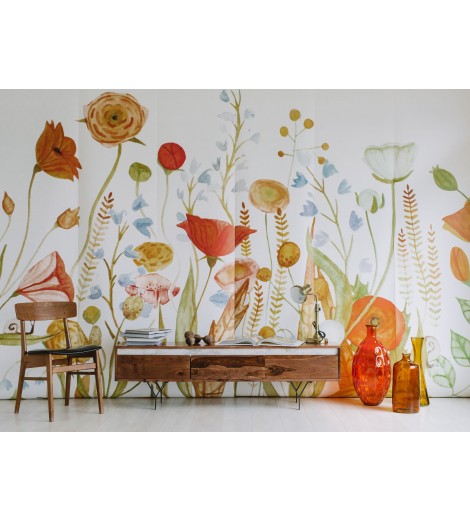 These colors! Having this mural on your way would be like living in an Alice in Wonderland forest in the 1970s. 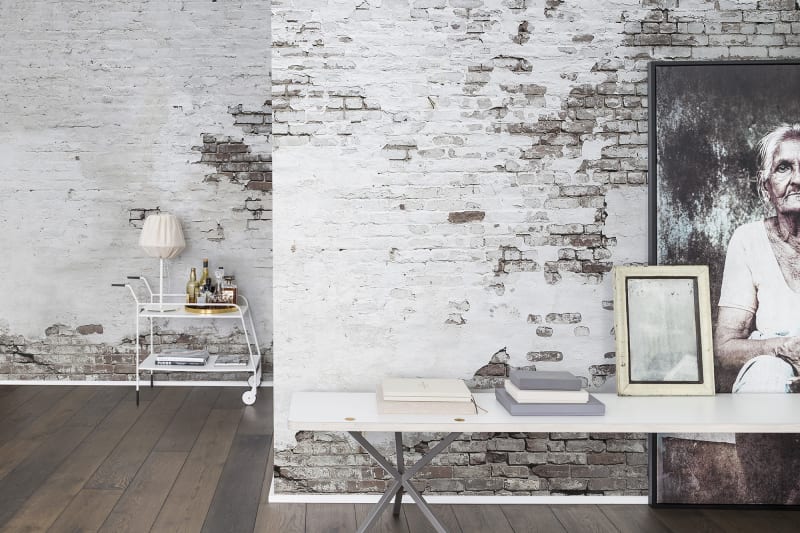 Wallpapered-on fake bricks should not work (and, based on my research, usually don’t).

This one works. And I love it. For the most realistic effect, I’d put them on a wall set back from the main living space, so that the paper is viewed from a slight distance. 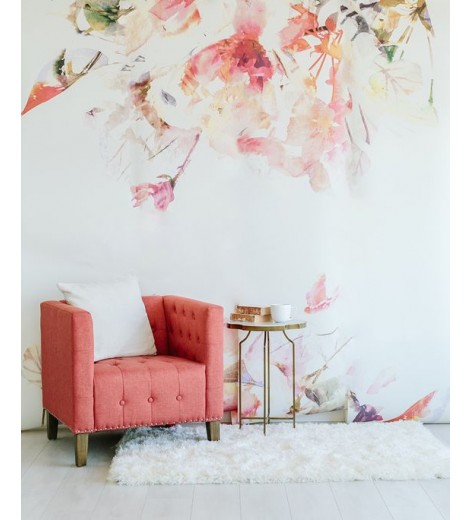 …Anyone else’s parents have a comforter with this exact floral pattern on it in the 1980s? This gives me all the romantic, nostalgic, cup-of-tea-and-some-toast-please feelings. 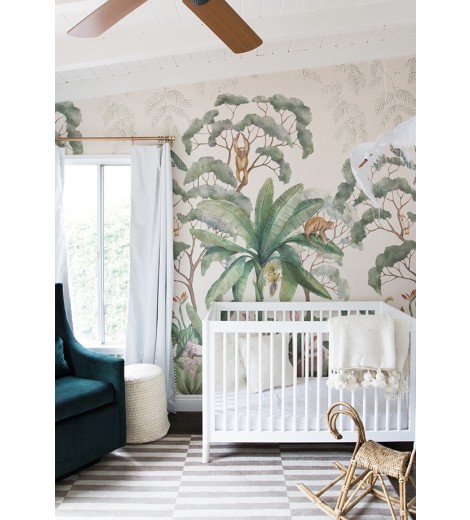 The most obvious place to use this mural is in a nursery (monkeys!) – and it’d be great in one, definitely – but the muted colors and elegant lines mean that it’d work as an accent in an adult space, also (in an entryway, maybe, or a small bathroom). 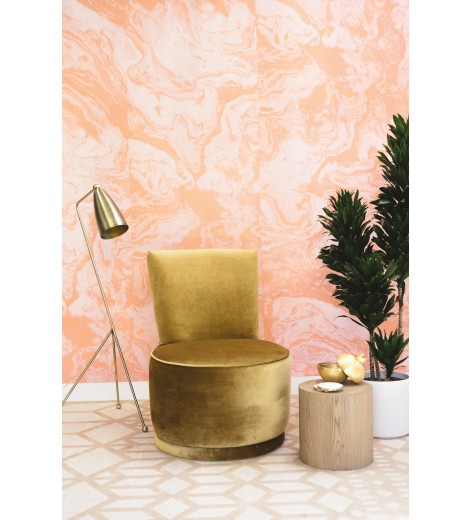 This marble-effect wallpaper mural is definitely girly, but it’s also more on the “salmon” end of the spectrum, and while I think it’d be overwhelming on a large area, I really love it for a hallway accent – and am in fact covering the narrow wall at the end of our hallway with this as soon as my order arrives. 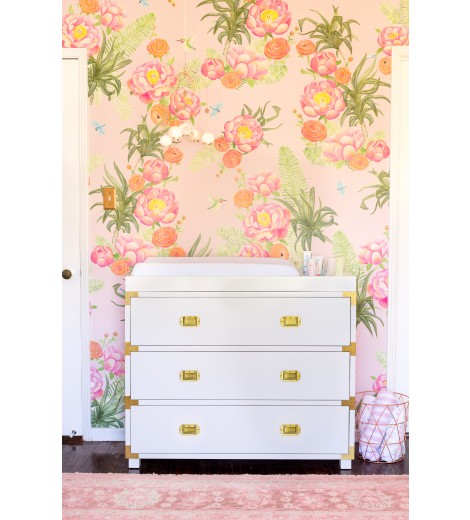 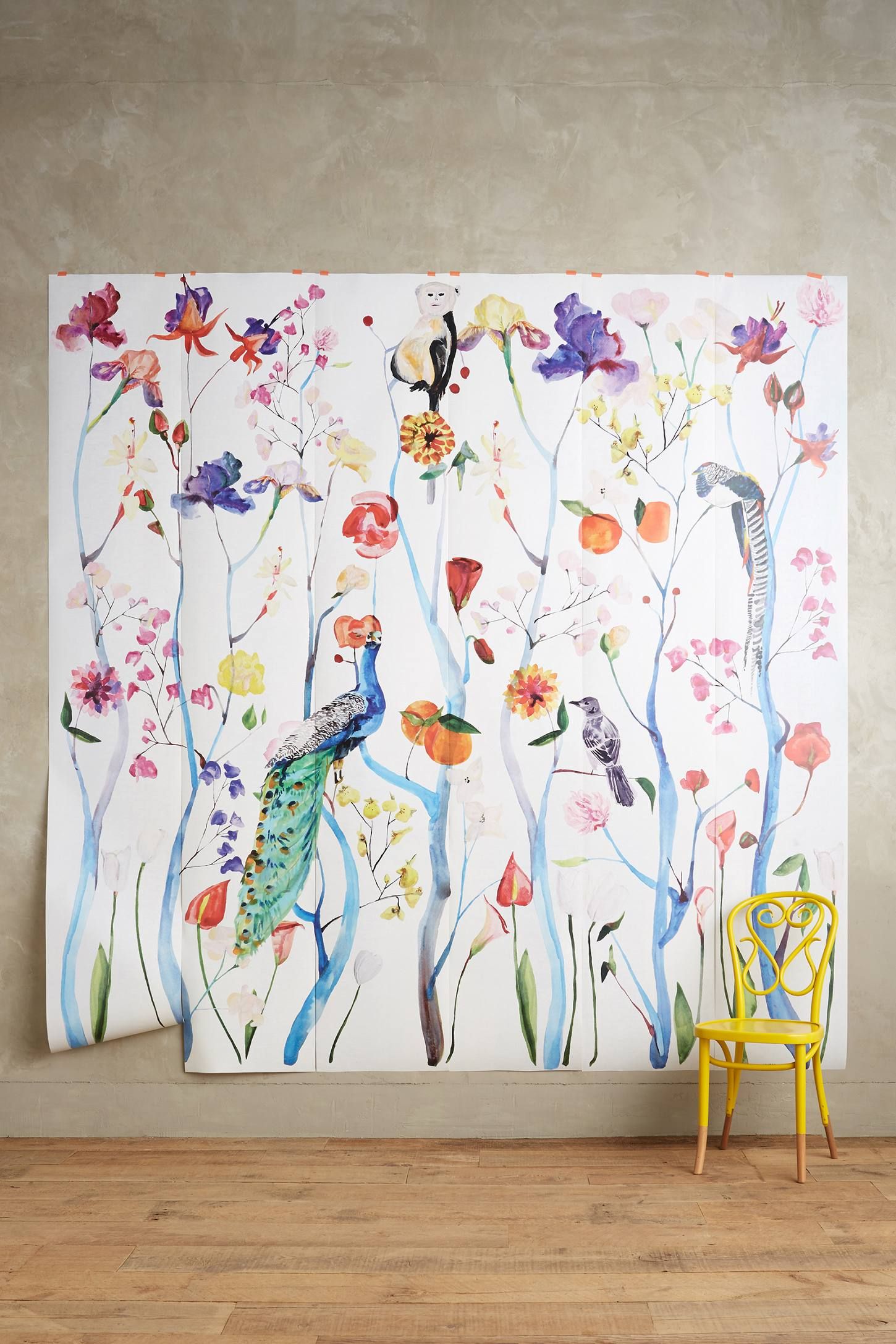 This is a big statement…but remember how I said wallpaper murals could visually anchor a room and virtually eliminate the need for additional wall decor? 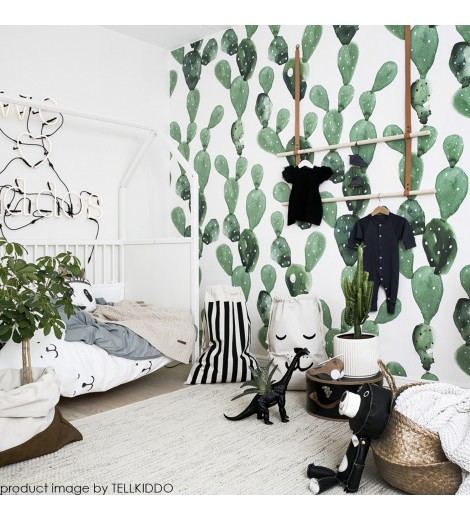 Yeah, yeah…this design is basically the wallpaper equivalent of the white-with-black-diamonds Moroccan shag rug at the moment. I don’t care; I think it’s perfect. 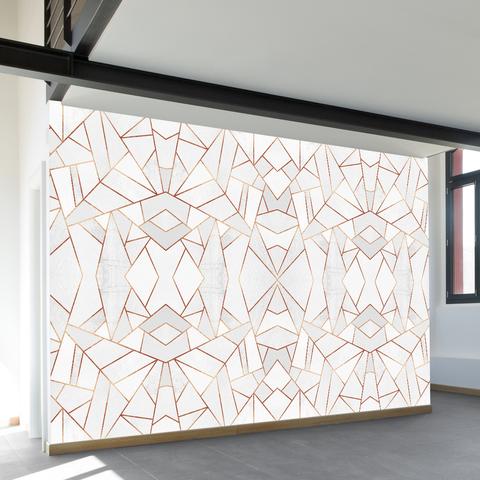 Clean and modern, this design would be beautiful in a bathroom or as a backdrop for a master bedroom. 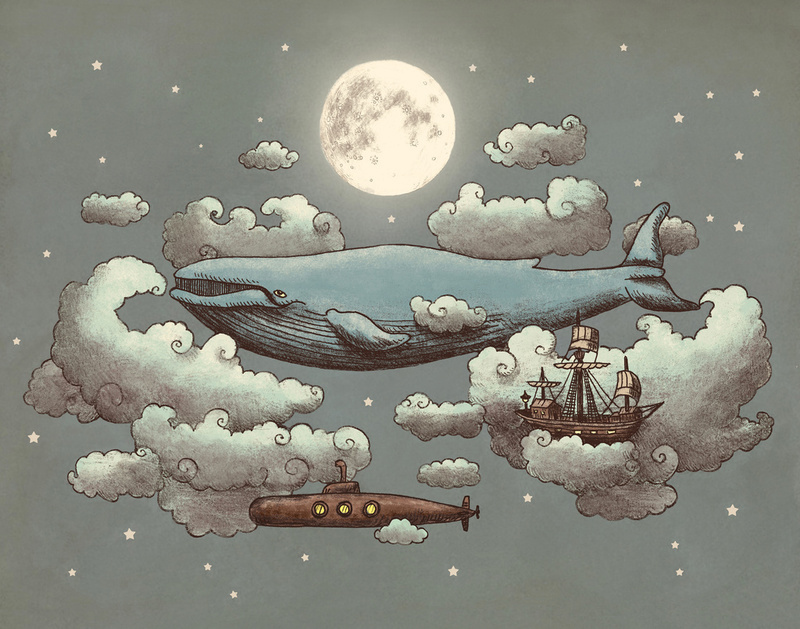 This design, based on the popular children’s book, is pure magic. 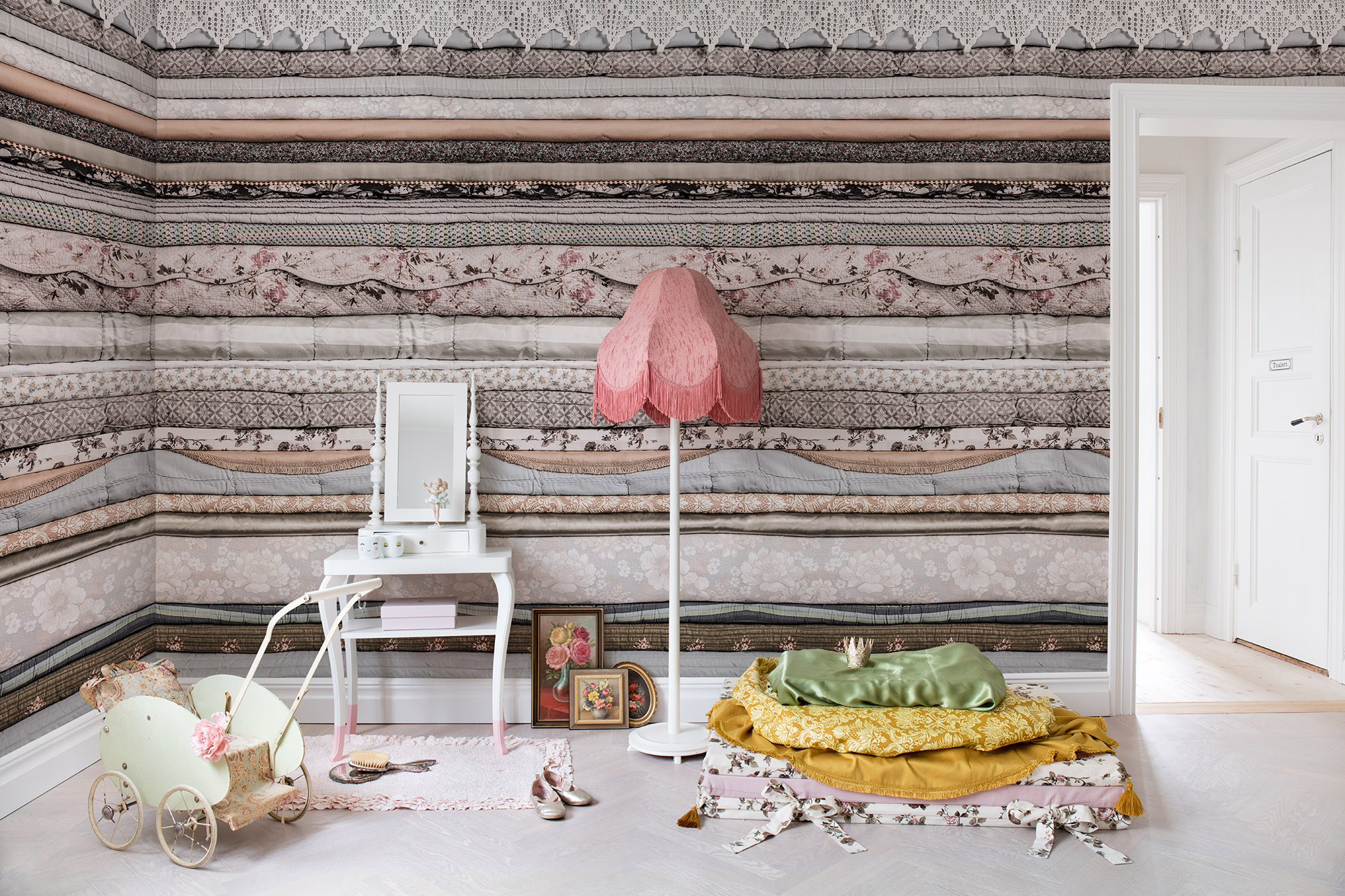 OK, one more. Ever dreamed of being the princess in The Princess and the Pea, minus the insomnia and the suspicious mother-in-law?