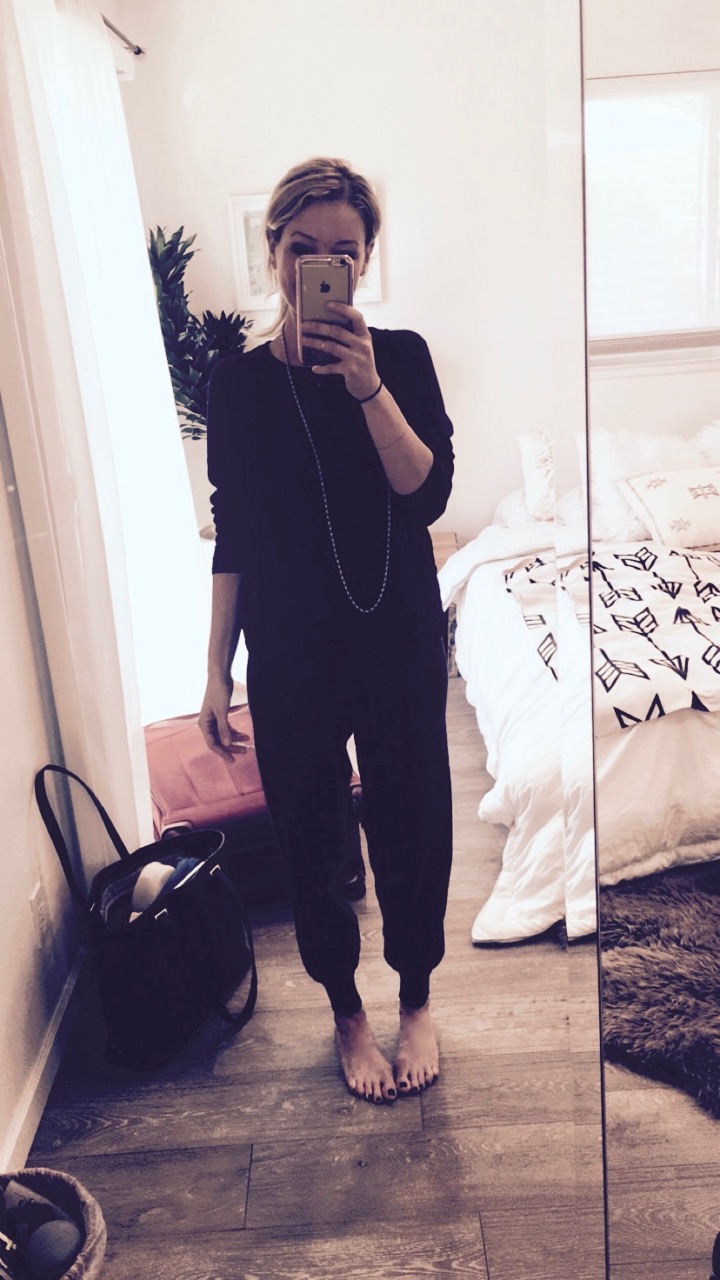 Wearing cashmere sweatpants (thanks mom!) to maximize the chances that they will end up ruined.

My feet look weird because I blurred them so as not to frighten you.

For whatever reason, our annual Ohio trip is always a bit of a thing, and has been even more spectacularly drama-filled in the three years since Goldie was born.

2014 went (pretty) smoothly, until five minutes before we were set to leave for the drive back home. We buckled our four-month-old into her carseat, put on our jackets, and were just about to step out the door of our hotel…when she threw up. (All over her car seat, which – as any of you who are a parent might know – is quite literally fucking impossible to clean.)  We were all “ohhhhhh I’m sure she just…ate something…” – mmmhmmm – but no: by the time we finished our ten-hour drive (made several hours longer thanks to the blizzard we were driving through) her eyes were completely crusted shut, and we got to end the party at the emergency room. (She apparently had pneumonia in her eyes, which I hadn’t been aware was something a person could have, but fortunately she was also the happiest ER patient ever, and for some unknown reason smiled through the whole decrusting process.)

2015 was the year of the toe that started out in one spot, and ended up in another, requiring us to make our way through the airport with both a stroller and a wheelchair. On the first flight, my daughter threw up all over both herself and me (FUN), requiring a frantic leggings-acquisition expedition during our layover. Within hours my son and I had picked up whatever plague she was carrying around, and thus spent the entire first night in Ohio shuttling back and forth to the bathroom. Kendrick took over for us the day after that, thereby completing the family circle of doom. Then I got naked on the flight home. (2015 won, I think.)

Last year started getting iffy on the way to the airport, when Kendrick suddenly stopped speaking. It turned out that he had gone silent for a good reason, because he spent the rest of the day living through what had to be the worst stomach flu that anyone has ever had (on a PLANE. Oh my god). We also got stranded in Chicago on the way back home, but that turned out to be pretty lovely, actually. Except it ended with raw sewage and fleas.

Anyway, this year’s trip has been going so well thus far that I’m starting to panic because I can actually feel God gearing up to laugh. Sure, Kendrick left his carry-on at the check-in counter, and sure, I lost both my boarding pass and my credit card seconds after arriving at the airport, but we’re on a plane! And I’m about to drink wine and watch Stranger Things! Sounds good, right?

Except here are some numbers that will help explain why I started out this post by saying that I am at this very moment jinxing myself:

(11) The number of hours we will have been traveling by the time we arrive at our hotel.

(0) The chances that the car rental place will have our booking information on file.

(60) Minutes that we will be driving in between Cleveland and North Canton.

(2) children, who between them will have eaten…

Thanks to my previous experiences I do, however, have the following on my person: