The House Booties That Died 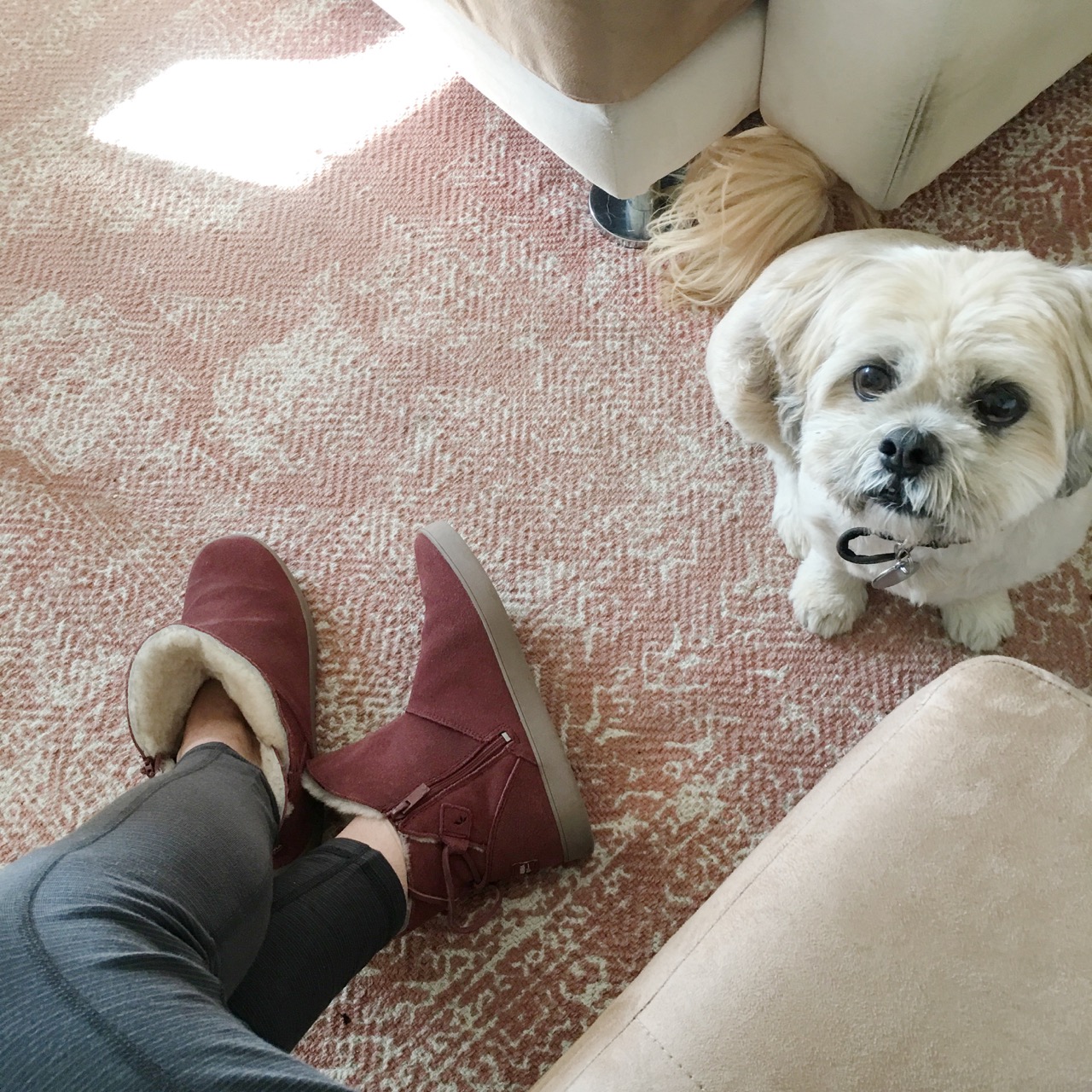 Everyone – and I believe this from the depths of my soul – should have a pair of house booties. I don’t mean “slippers”…I mean house booties.

It is vital that said house booties possess the following qualities:

(1) They must hit precisely at the ankle;

(2) They must be filled with fluffy sheepskin gloriousness;

(3) And they must never, ever, on pain of death, be permitted to come into contact with even the tiniest speck of ground that is not physically located inside one’s home.

Some of these booties are lacking in the requisite qualities, but they are all cute nevertheless.

Let me tell you how my first pair died, because it involved me doing something completely illegal in front of my children – two things, actually – and stories about doing illegal things tend to be fun.

I was at home with my kids, happily puttering around cooking or whatever, when the phone rang. It was my friend M: she was visiting family in another state, and had left her brother-in-law in charge of her dog. The dog had gotten sick and had been taken to the vet for surgery, but her brother-in-law couldn’t pick him up. Could I go grab the dog and bring him back to her house? Of course. No problem.

I was all flustered and rushed trying to get out of the house in time to beat rush hour traffic, and so the kids and I made the forty-five minute drive to the vet wearing exactly what we’d been wearing when I received the call. No big deal whatsoever for my children…but for me? Oh, for me it was a big deal. Because guess what I was wearing on my feet?

Anyway, I picked up the dog, discovered that he weighed approximately eighteen times as much as I do, and yet somehow managed to wrangle him into my trunk by planting both hands on his dog-butt and pushing with every speck of my distressingly un-muscled body while yelling “FUUUUUUUCK” (which, sure, one should never scream when children are nearby, but there are exceptions to every rule, and this was one of them). I got in the car and began driving to my friend’s house to drop off her dog.

It was then that I noticed the smell.

Remember last month, when I spent a morning scrounging around in a dumpster with slime walls that smelled like Cheetos and death? Even as that was happening – like, at the very same moment that I was absorbing the fact that my head was located in a narrow passageway of death-slime – I actually thought to myself “Oh! I remember this smell!” Because as singular as it was, I had actually smelled it once before: In my car, while driving M’s post-surgical dog to her house.

At the time, I figured the smell was some kind of dog-surgery thing – I mean, I’ve had surgery a few times in my life, and you don’t really leave smelling like peaches. But this was BAD, you guys. Like, roll-down-the-windows-and-breathe-through-the-mouth-but-it’s-still-an-emergency bad.

Five or ten years later, I arrived at M’s house, and the dog and all associated smells ceased to be my problem. I have never been so happy to say good-bye to a theoretically adorable four-legged creature in my life. So I got back in the car, and we drove away, up the on-ramp to the highway. The car still smelled just as terrible as it had with the dog in it, so we rolled all the windows down to air out the car…but it just kept getting worse, if that’s possible. And worse. And worse. And then I was on the highway, going about sixty miles an hour, with two children in the backseat, and quite literally panicking about the smell because seriously, I was definitely going to throw up and throwing up in a moving vehicle is a terrible, horrible idea, especially if you are the driver…and all of a sudden I realized:

It wasn’t the dog.

It had never been the dog.

I picked up one of my house-bootied feet and yes, there you go: Embedded in those formerly-pristine rubber treads lay the scent’s source, which I shall not describe to you because I love you. (Suffice it to say you should probably watch where you’re walking next time you swing by the vet.)

(Except the rule about letting your house booties leave your house. Just please don’t ever do that.)