A Trip Down Memory Lane: The “Personal Box” 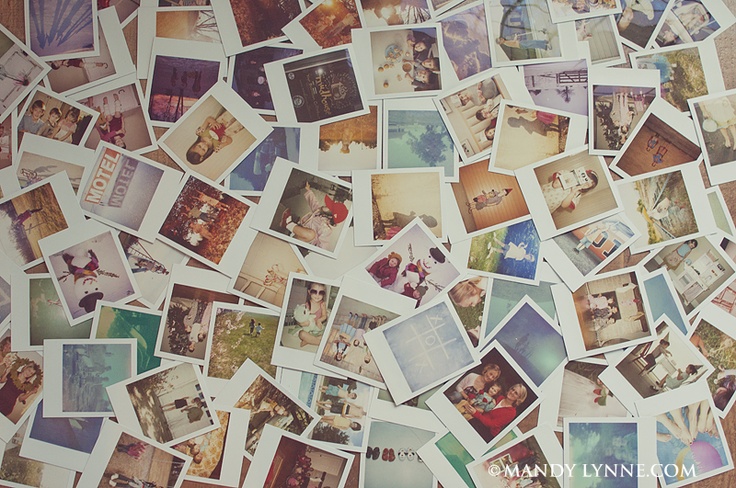 Sifting through my “personal box” gave me all the feelings. (Mostly horrified ones.)

Remember how I mentioned in the post about my (probably ill-advised) new living room furniture that we decided to keep our old couch, so we could do something awesome with it? What we’re planning to do – and started doing over the weekend: a massive, massive garage remodel that’ll include a separate area for laundry, an office space for Kendrick to record in, and a family room – plus a lofted bed up in the rafters. I’m obviously going to post all about the process, because I’m SO excited – and if it turns out anything like what I’m hoping, it’ll be the best thing ever.

But in the meantime, let’s look at some embarrassing stuff, shall we? Because while going through my overflowing “personal box” (basically a huge pile of crap dating back to 1984 that I never threw out for one reason or another), I came across a treasure trove. 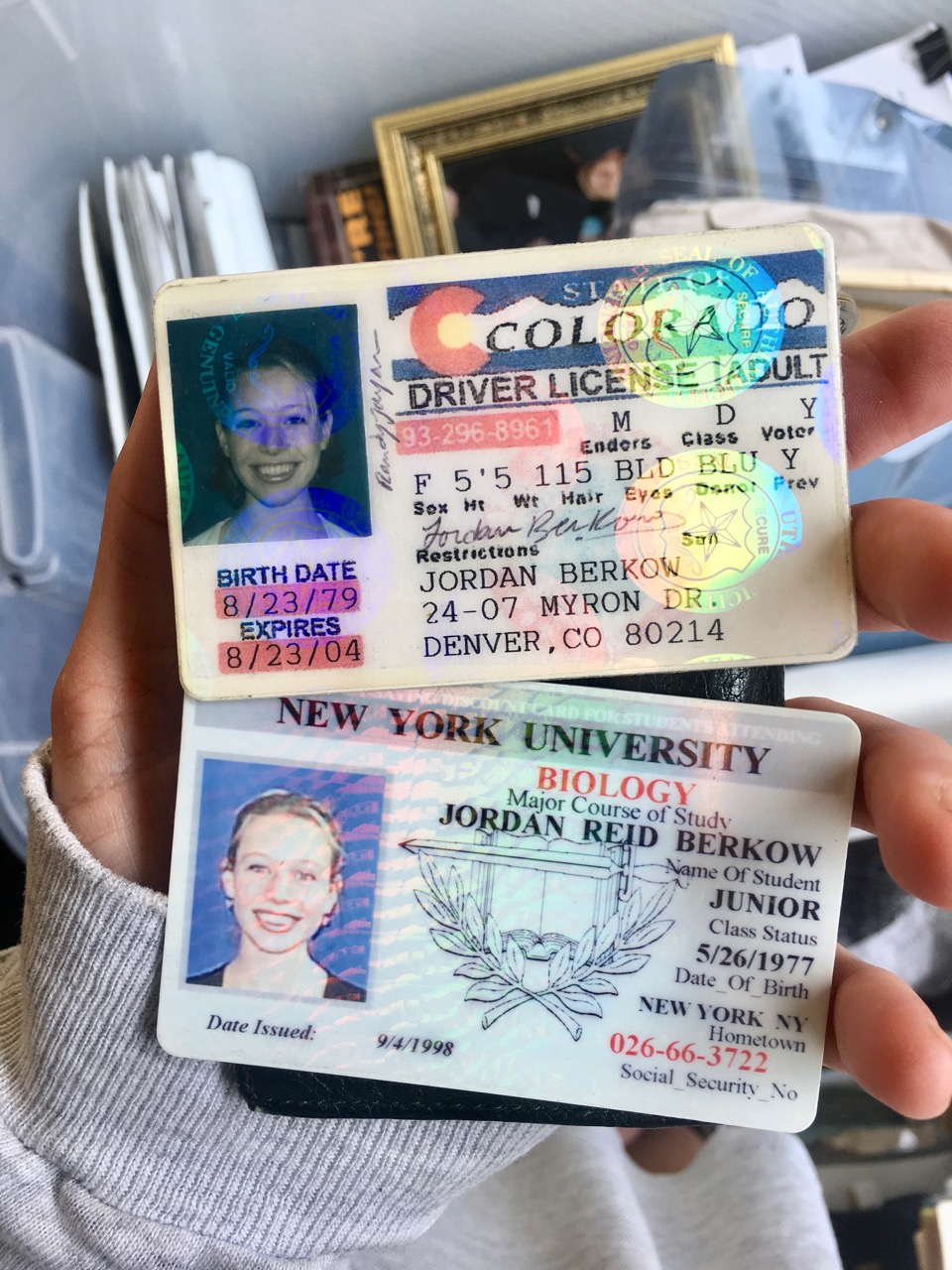 Hi, fake IDs! (Believe it or not, that one on the top worked pretty well. The one on the bottom…ah, not so much.)

Want to hear a related (and extremely pathetic) story? The first time I decided to try to get a fake ID my friend Danielle and I – both of us 14-year-olds in search of a way to get our hands on some Zima and clove cigarettes – spent an afternoon wandering around in Times Square until someone asked us if we wanted to buy fake IDs. (These kinds of things happen if you wander around in Times Square for long enough, or at least they did in 1995.) Why yes sir, we would!

So we followed this random guy into a pizza parlor (sidenote: this is not recommended), where he sat us down at a table and gave us very official looking forms to fill out listing our (fictional) address, (fictional) date of birth, etc. Then he asked us each for a hundred dollars. We handed over the wads of cash that we’d saved up for just this purpose, because clearly we could totally trust the man who was ostensibly supplying minors with illegal government identification to keep his word. He said he’d be back with the IDs in twenty minutes.

…How long do you think we sat there in that pizza parlor, waiting for him?

The next thing I’m going to show you is super creepy, so beware. 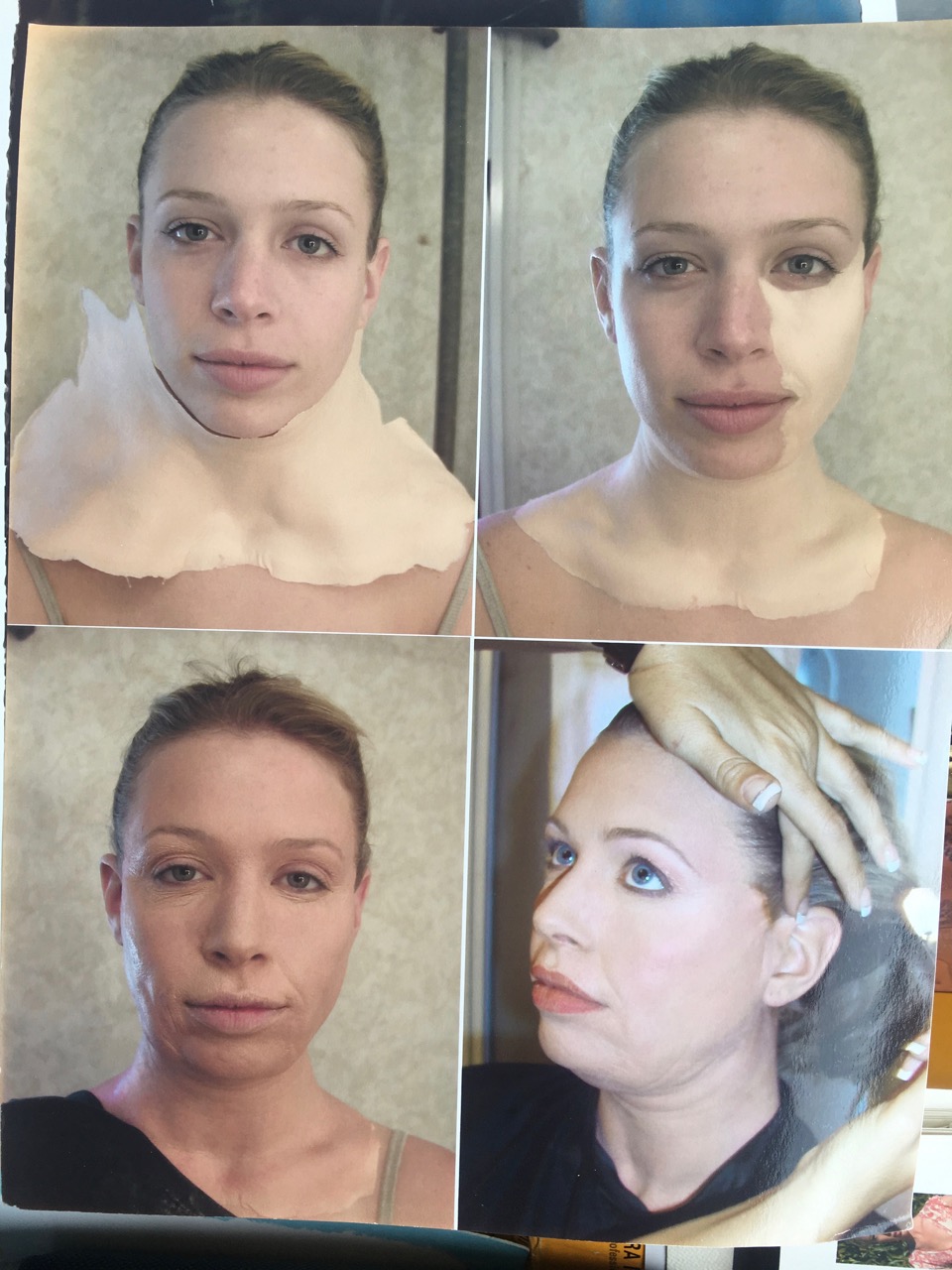 This is me being transformed into an old lady for a Capital One commercial I shot in 2004. It was the worst, and I mean that pretty literally: the first step in the process involved them covering my entire head (including my mouth and eyes) with a heavy plastic cast so that they could make an impression of my face (which they then later used to make the creepy rubber face you see being applied up there). I couldn’t see, or speak, and could only breathe through two tiny straws that they’d inserted in my nostrils. And if I panicked, it would take them however long it takes to remove cement from a person’s head – which I’m assuming is awhile – to get me out, so panicking wasn’t an option.

…Did I mention I’m claustrophobic? 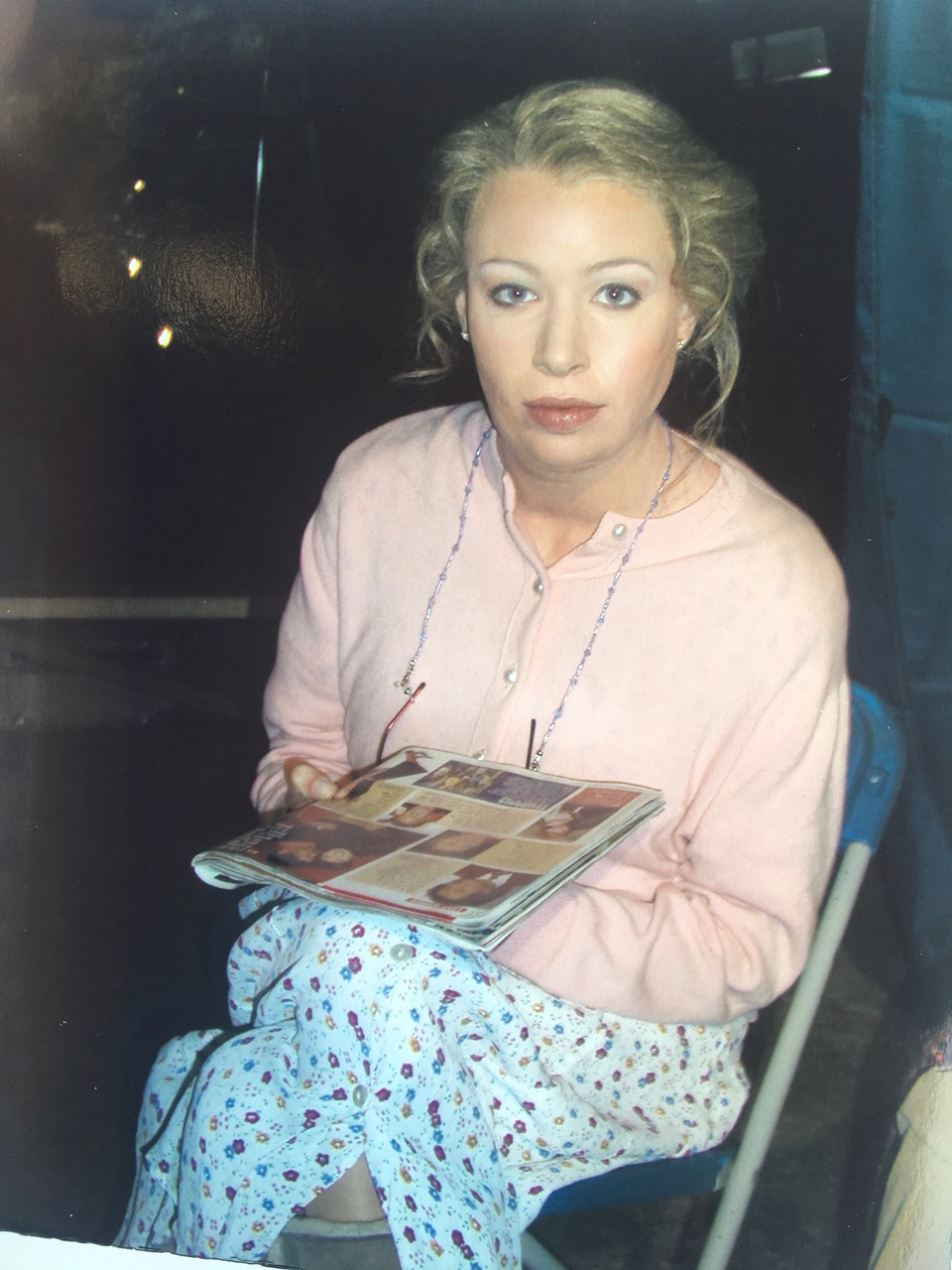 At least now Kendrick knows what he gets to…look forward to. Or something. 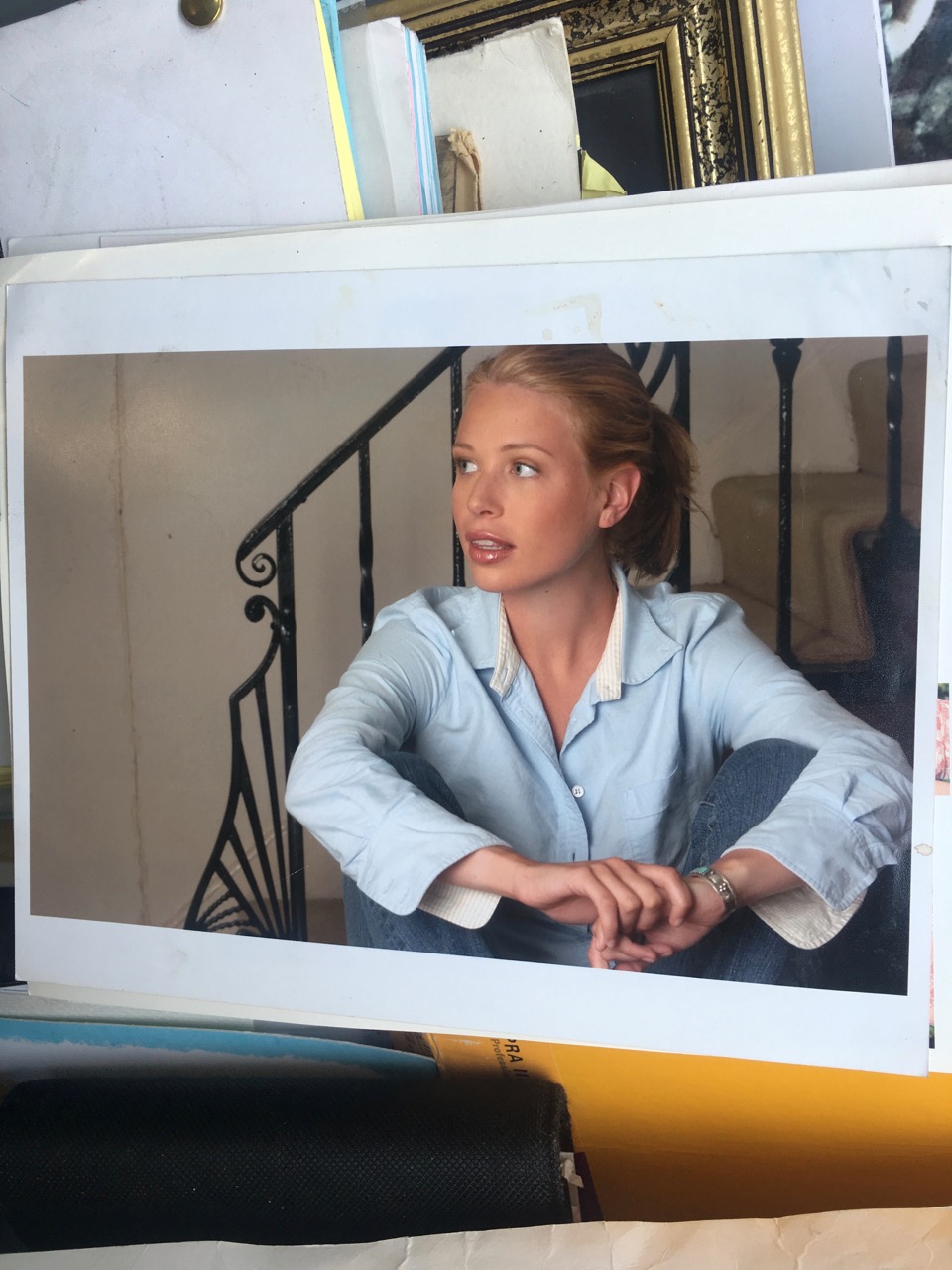 Oh, this 2004 headshot. Never have I ever been quite so blonde. Or orange. 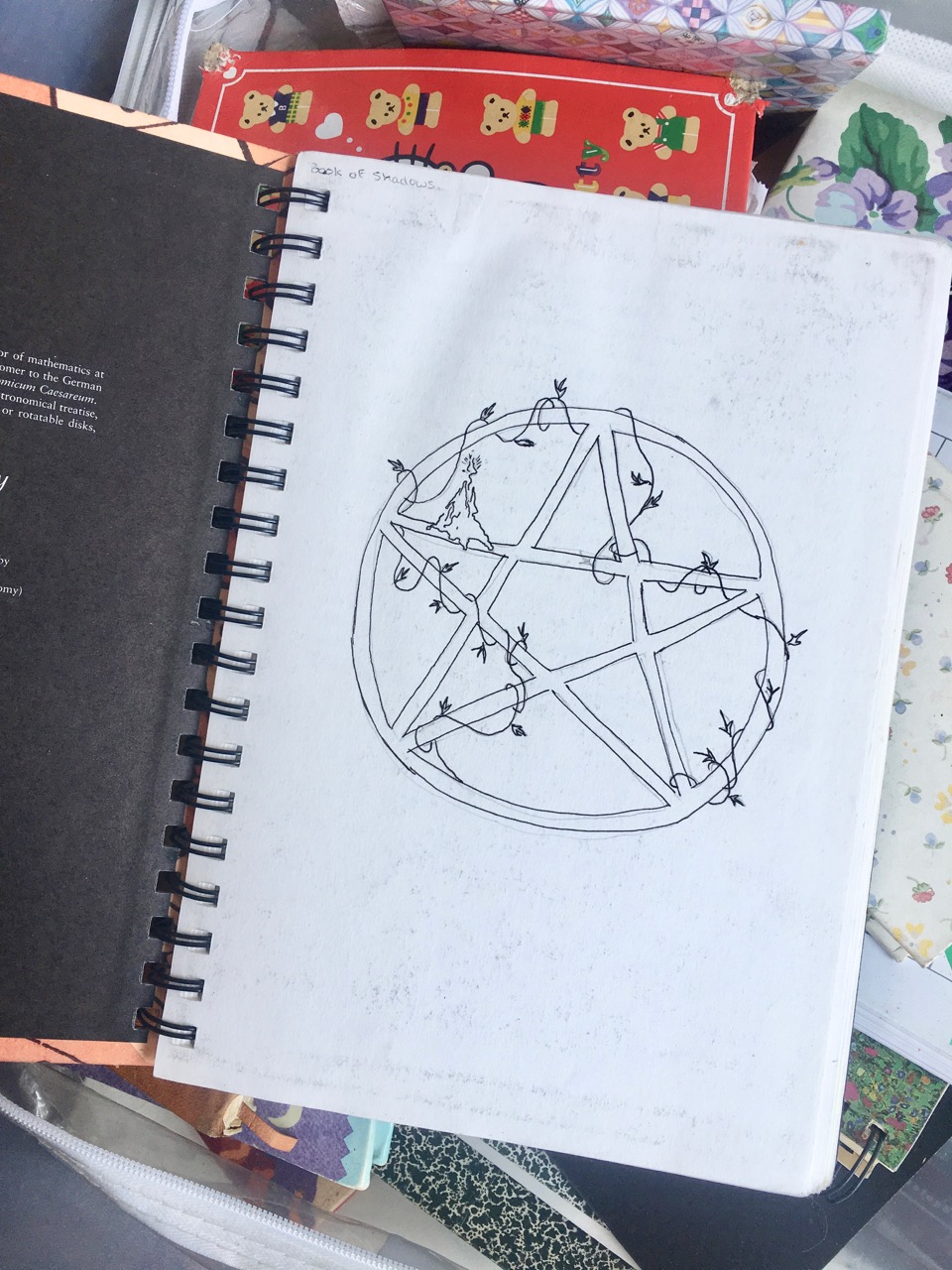 I’ve written before about being 15 and depressed and spending an entire summer taking the M11 bus uptown to a little Wicca shop on the Upper West Side, then back down again.

Did you forget that I used to be a witch?

I used to be a witch. That right there was my journal, and it is indeed as painful to read as you’d imagine. 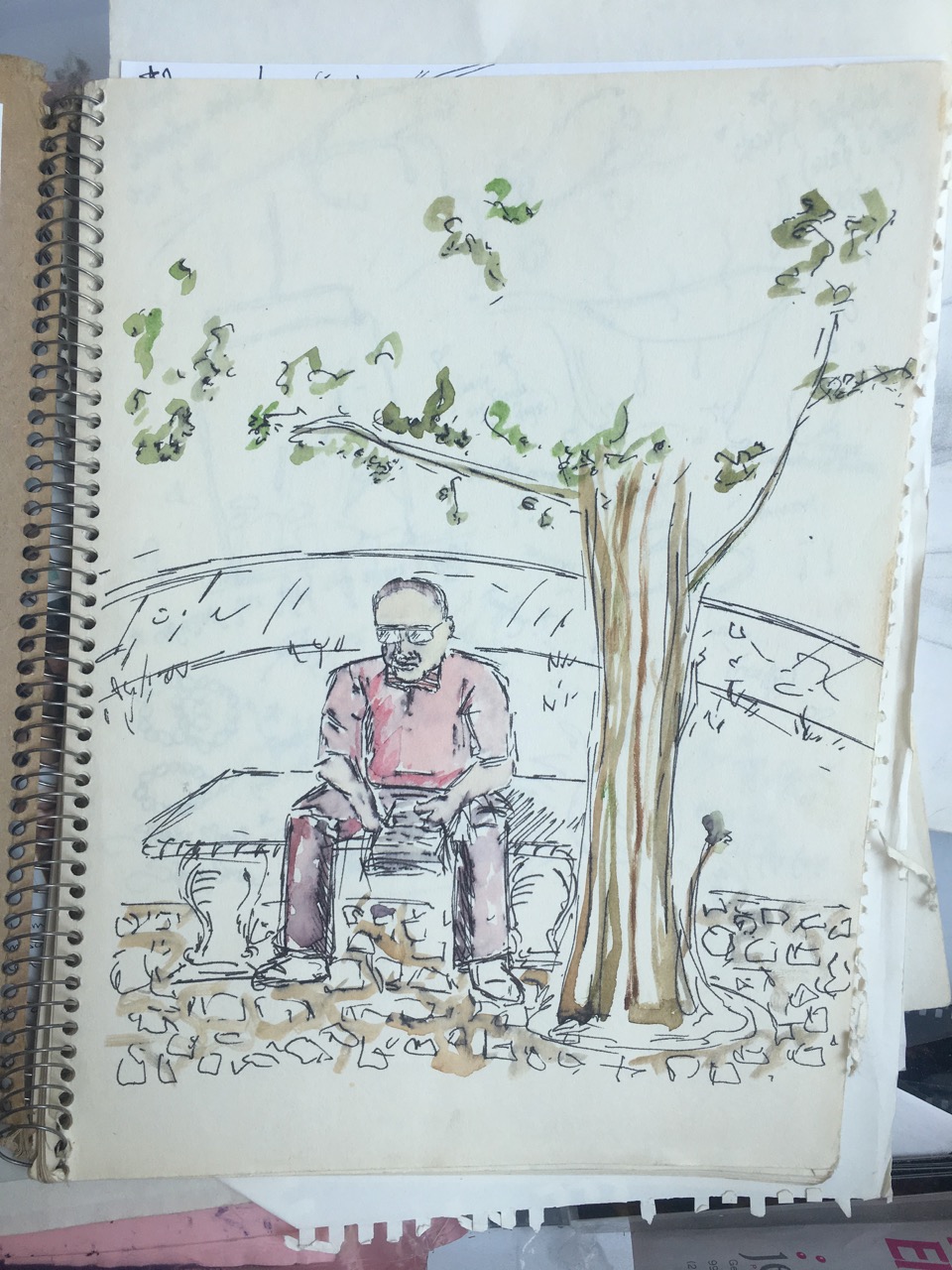 I also spent a lot of time that summer sitting in Central Park with a sketchbook. I’d forgotten about this particular ink-and-watercolor – it’s not really finished, and it’s not especially good, but it reminds me of a very specific moment in my life. I’m glad I still have it.

And now, moving on to a less melancholy topic, allow me to present: 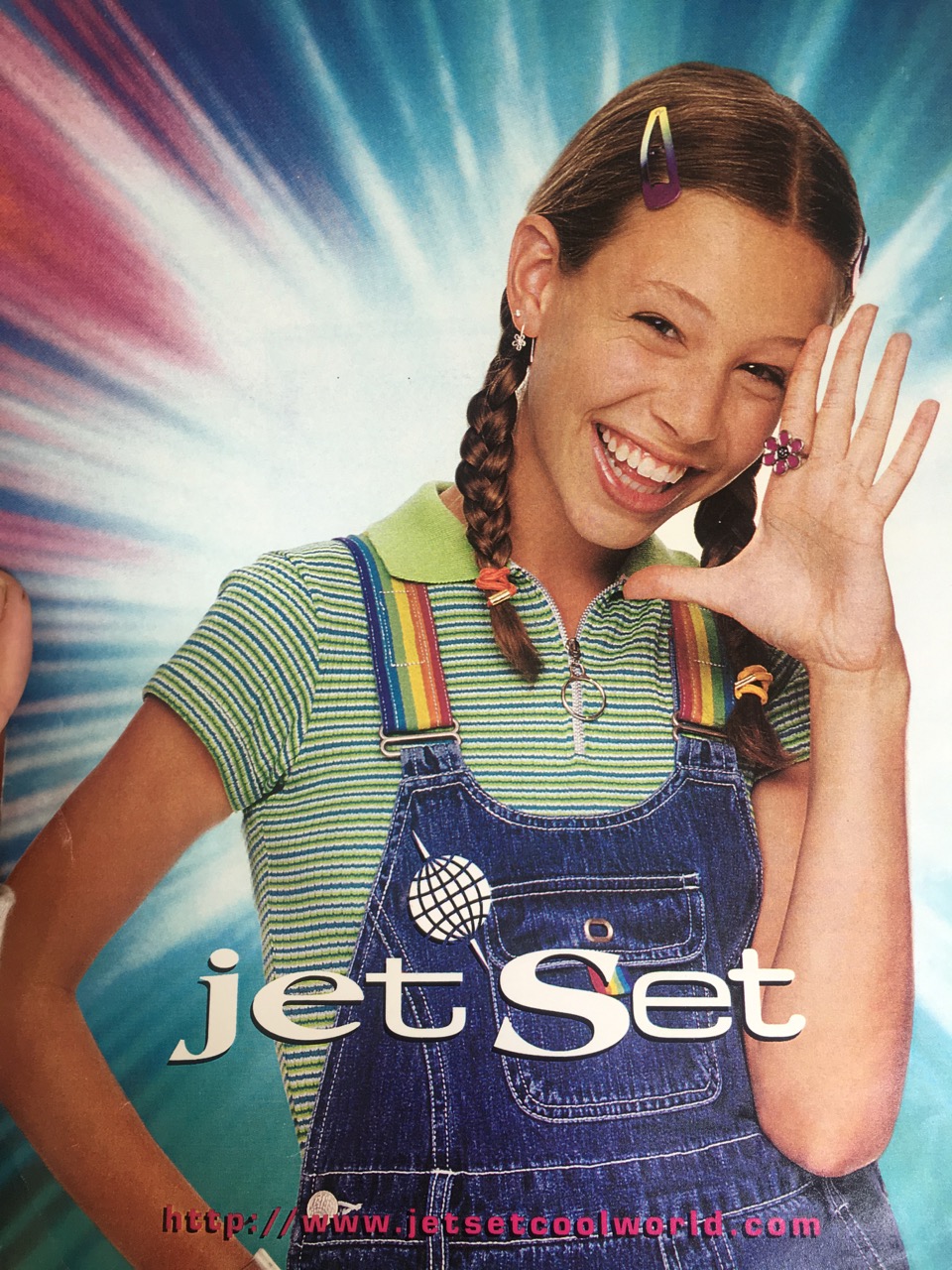 It is an ad for a late-90s clothing line called Jet Set that apparently specialized in unfortunate collar choices and happiness via plastic flowers. I think there’s a strong argument to be made that this is, in fact, the most embarrassing teenage photo in the world. It’s up there, at least. (The HAIRCLIP.)

Want to hear the worst part? My orthodontist – who was also the orthodontist for like 60% of the other kids in my school – hung it up on the wall in his office. For five years. 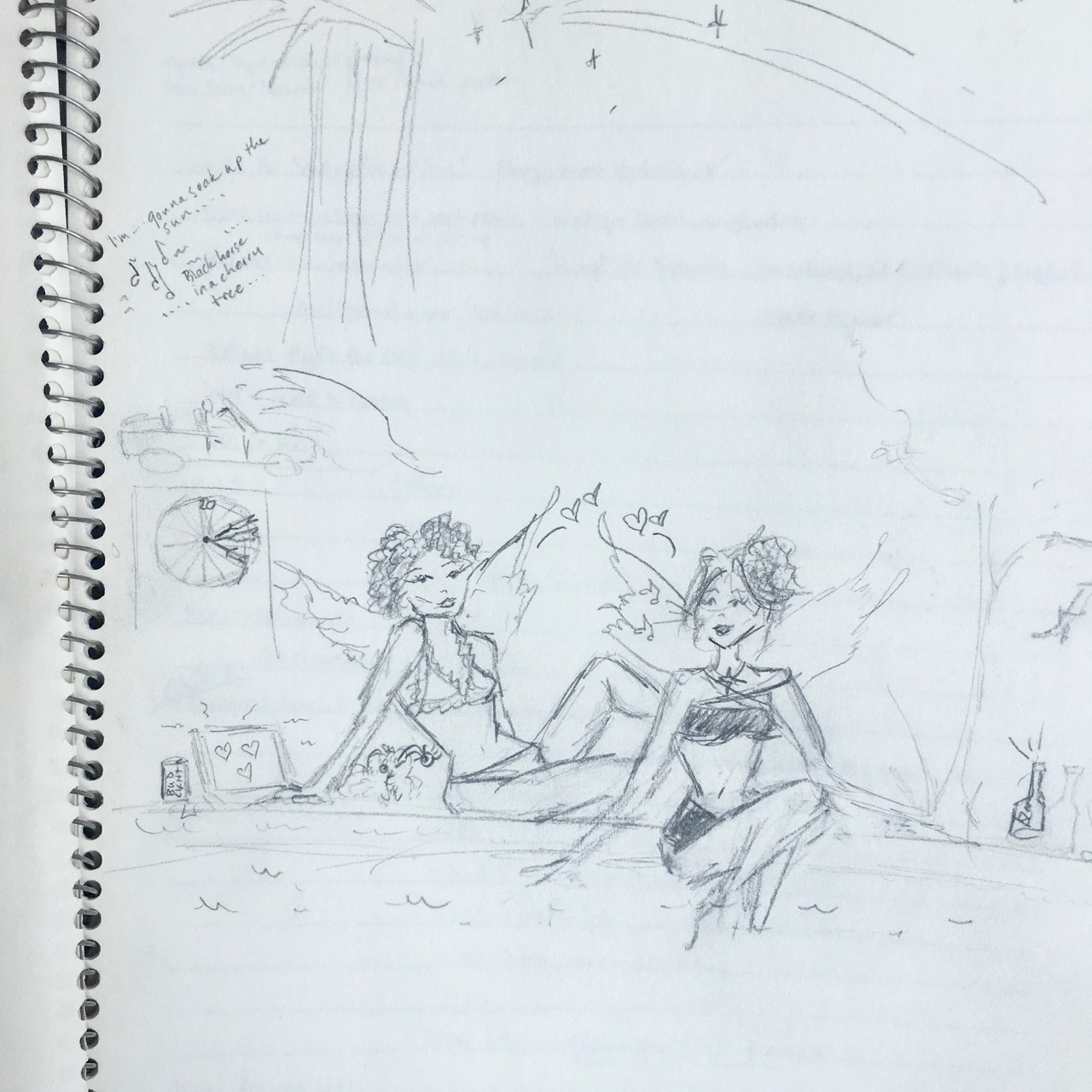 And finally, there’s this. When I was in high school I had a habit of drawing little illustrations of my friends and me. I’d place us in scenes filled with little inside jokes, number each of the jokes, then pair the drawing with an annotated list explaining what they were. Apparently I started – but never finished – this one of me and Francesca sitting by the pool when we lived together. There’s a lot of solid gold here – the Bud Light cans; the dartboard with bullseyes; the rampaging, tequilaed-up pirate coming to get us (you can see her boot off to the far right) – but the real gem can only be seen if you know exactly what you are looking for, because dog-drawing isn’t in my wheelhouse. 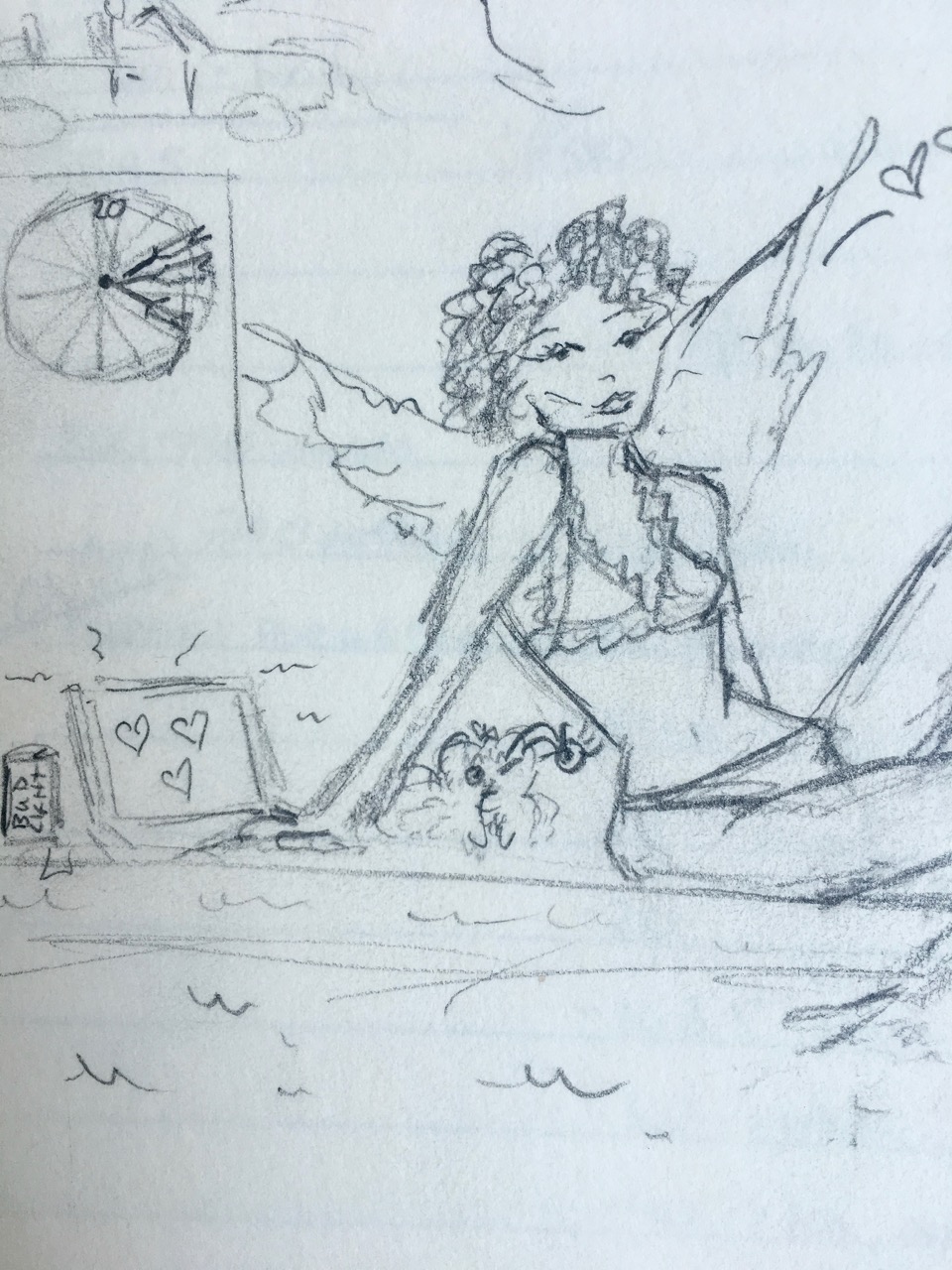 That creature tucked under Francesca’s arm, with the little bow in its hair? That would be Lucy. And the doodad hovering over there on her right? That would be her eye. Popping out.

I drew an illustration of my dog’s eye popping out. And the eyeball has eyelashes.