An Ode To My Couches 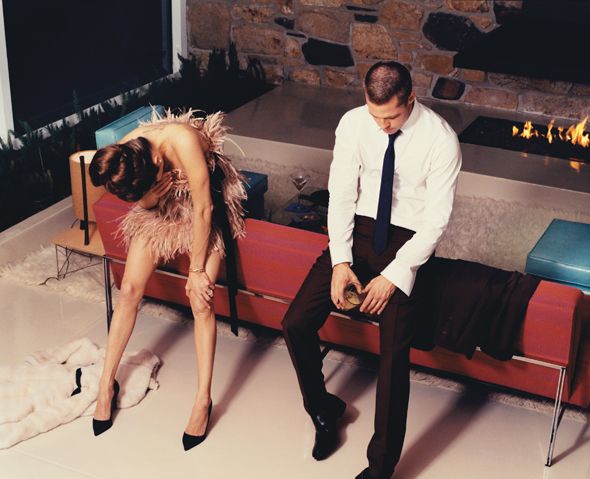 If you’ve been reading Ramshackle Glam for awhile now, you may have noticed that I have what could be called a “mild couch fixation” (or, as Kendrick refers to it, “Jesus, Jordan, what’s wrong with the couch we already have?!”)

Let me take you back to where it all started, because it started – as oh, so many things do – with a trip to Ikea. I was 22 years old and had just driven across the country from New York to Los Angeles (where I very sanely expected to commence an enormously successful and lucrative career as an actress). I had just rented my very first apartment, right off of the Sunset Strip: a junior one-bedroom with antiseptically new vertical blinds that, when pulled aside, could reveal the Hollywood sign if you stretched your neck way, way up. My parents had offered to take me on an Ikea furniture-purchasing trip, and immediately upon entering the sofa section I discovered the slipcovered beauty that I was absolutely certain would elevate my junior one-bedroom from “featureless box” to “glam single-lady dwelling.” It was exactly the same couch that every other person I knew owned, except mine was snow white.

Why white, you ask? Because I had convinced myself that a person who harbored a strong affection for Two Buck Chuck cabernet should drink herhighly pigmented wine while sitting on white furniture, and because I had not yet internalized the rule that I held on to for many, many years, up until about two weeks ago: “Never Own Anything White, Ever” (more on that in a minute).

My white sofa, of course, eventually turned a vaguely urine-esque shade of yellow that was likely a combo of Two Buck Chuck and Los Angeles smog, and I moved on to Chic Espresso Couch #1. Chic Espresso Couch #1, alas, ended up looking slightly less-than-chic in the aftermath of an apparently exhausting cross-country trip during which I have to assume that all three of the very large movers whom I hired to help me get it from L.A. to New York sat on it, slept on it, and took it to parties and gave it tequila shots.

Formerly-Chic Espresso Couch #1 was replaced by Big Apple Circus Couch: a striped hand-me-down from my parents that ended its life at a rave. (This is true: I posted the couch on CraigsList under “free stuff,” and later that afternoon opened my door to find three intensely, almost impressively stoned young men who evaluated my couch for approximately half a second before telling me that they were going to cut off its legs and take it with them to a rave. Which they then…did.)

Then there was The Powder Blue Couch of Misery, which I purchased from a nice old lady who lived near me on the Upper East Side. I loved it for about a week, at which point I realized that laying on the thing felt like chilling out on a bag of cement. I moved on to Chic Espresso Couch #2, which was perfect for a short while, until we spontaneously grew a second dog and a human child, and realized that, diminutively elegant as the couch was, exactly one-fifth of our family was able to comfortably fit on it at one time.

Finally, at last, I found it: My perfect, perfect couch, soon named The Smooshy Couch Boat (and immortalized in the Vine above). It was my very first for-real, grown-up (by which I mean horrendously expensive and previously owned by no one else) couch I had ever bought. It was the couch of my dreams, and I mean that literally: I dreamed about it before I bought it, because I am the kind of person who dreams about couches.

And now The Smooshy Couch Boat is gone. Not out of our lives – oh, wait until you see the plans I have for it; it’s going to be AMAZING – but certainly out of our living room, where it never fit in the first place. It cut off half of the archway leading into our dining room, had no room for a side table on either side, and absolutely refused to move out of my way when I was wandering around the house late at night (this was extremely annoying, and resulted in a large, seemingly permanent bruise across the front of my right thigh). Yes, it was very, very smooshy and comfortable, but after five years of hard living, it had also, as they say, had the biscuit.

I wasn’t going to get rid of it now, you know; I’m not crazy. I have two young children, and figured I’d put a pin in the whole “new couch” thing until they reached an age when I could be 100% certain that they would poop where they were supposed to poop (so around…15?). But then I was on a local consignment store’s website because there are some chairs I’m trying to sell, and I saw it: 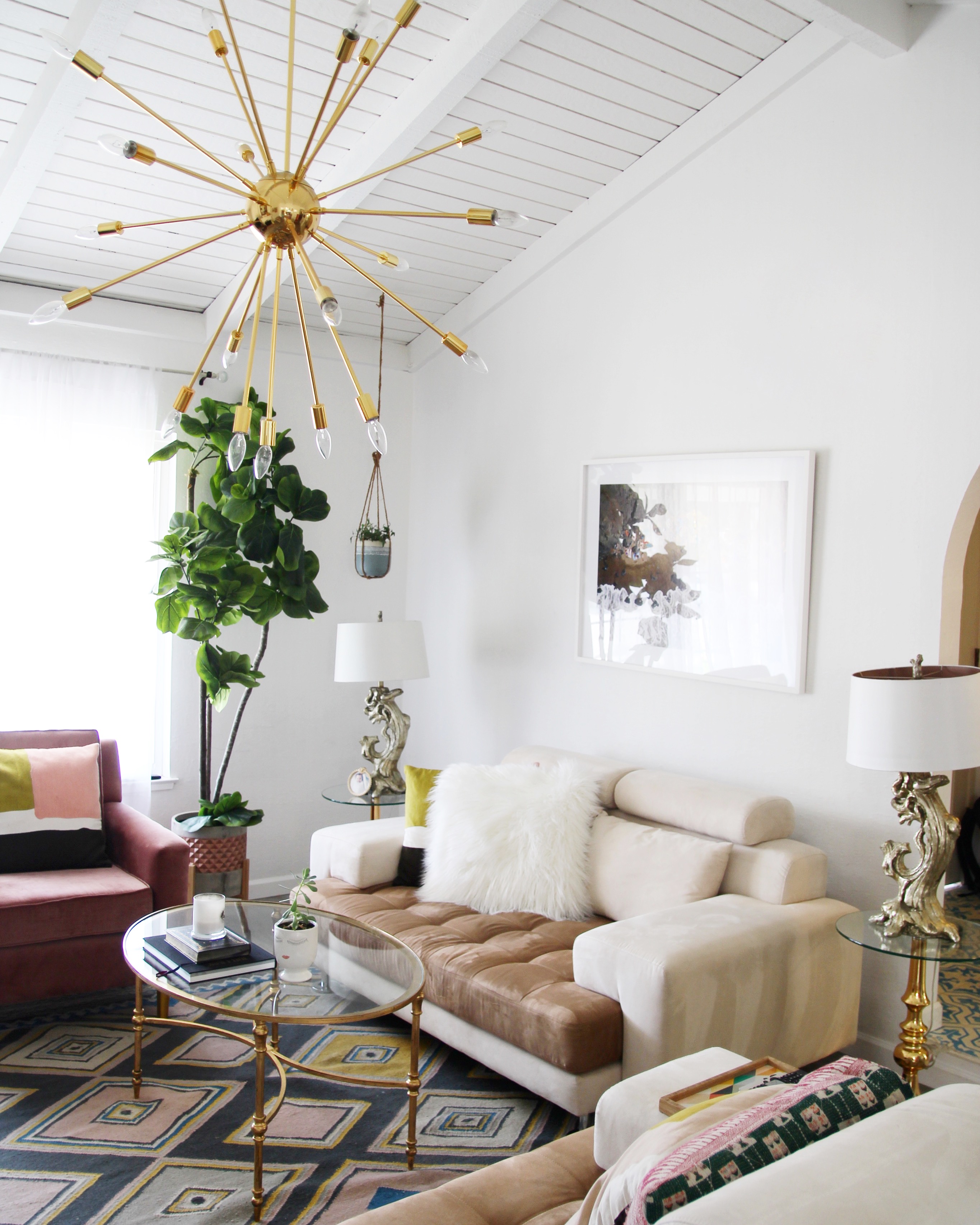 A Scandinavian Designs loveseat, side chair and ottoman – all the perfect size and shape for my oddly sized and shaped living room – for four hundred dollars total. Did I mention that they had been previously owned by a house stager, and had thus never actually been for-real used? The very next morning I was sitting in the consignment store, writing a check for my new living room furniture and figuring I’d work out to do with my Smooshy Couch Boat later (again, ohhhh I figured it out, and ohhhhh my god I’m so excited).

So now? Now I own a cream-colored couch. It appears that I have come full circle: more than a decade after I loaded that snow-white couch into my junior one-bedroom, I am once again living in the land of sun and sea and making poor, poor choices.

Hopefully they’re confined to furniture selection this time around. 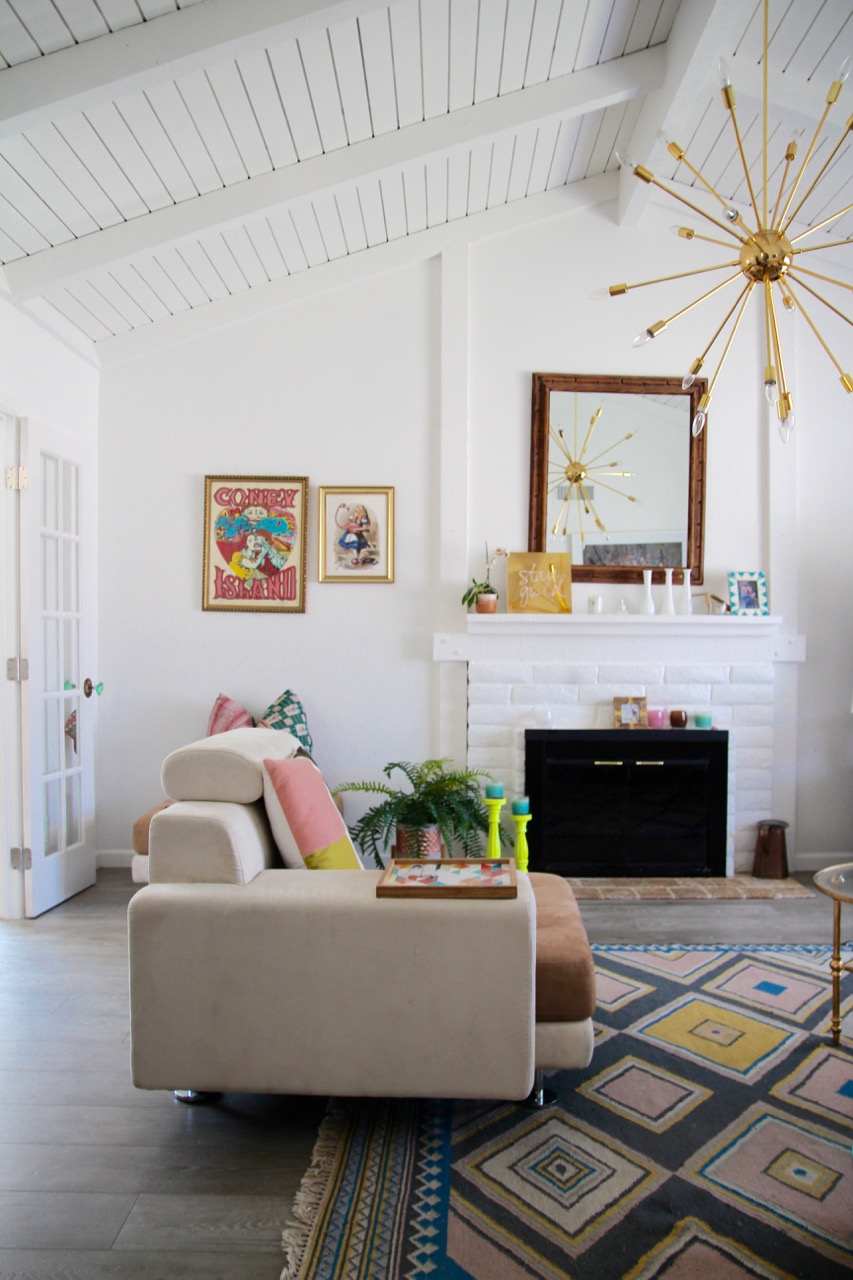 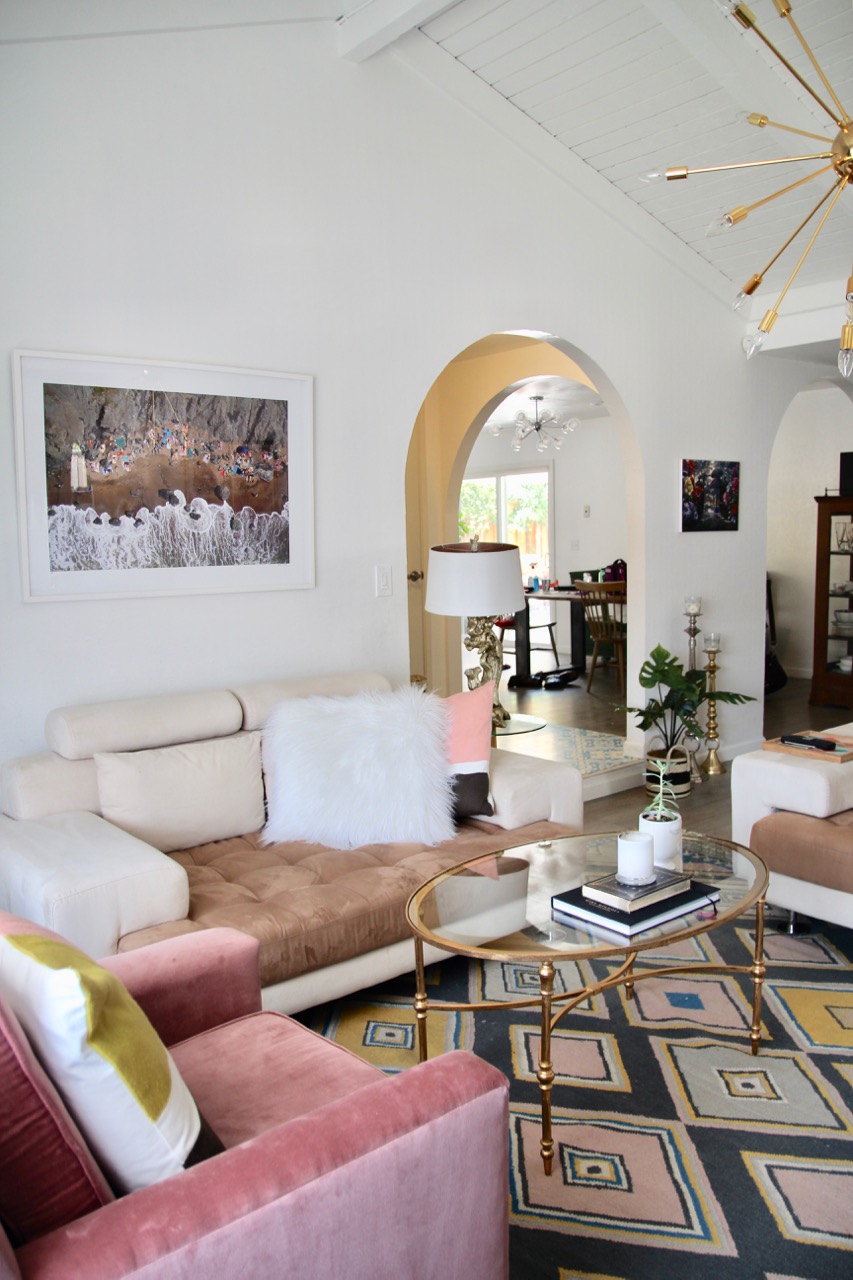 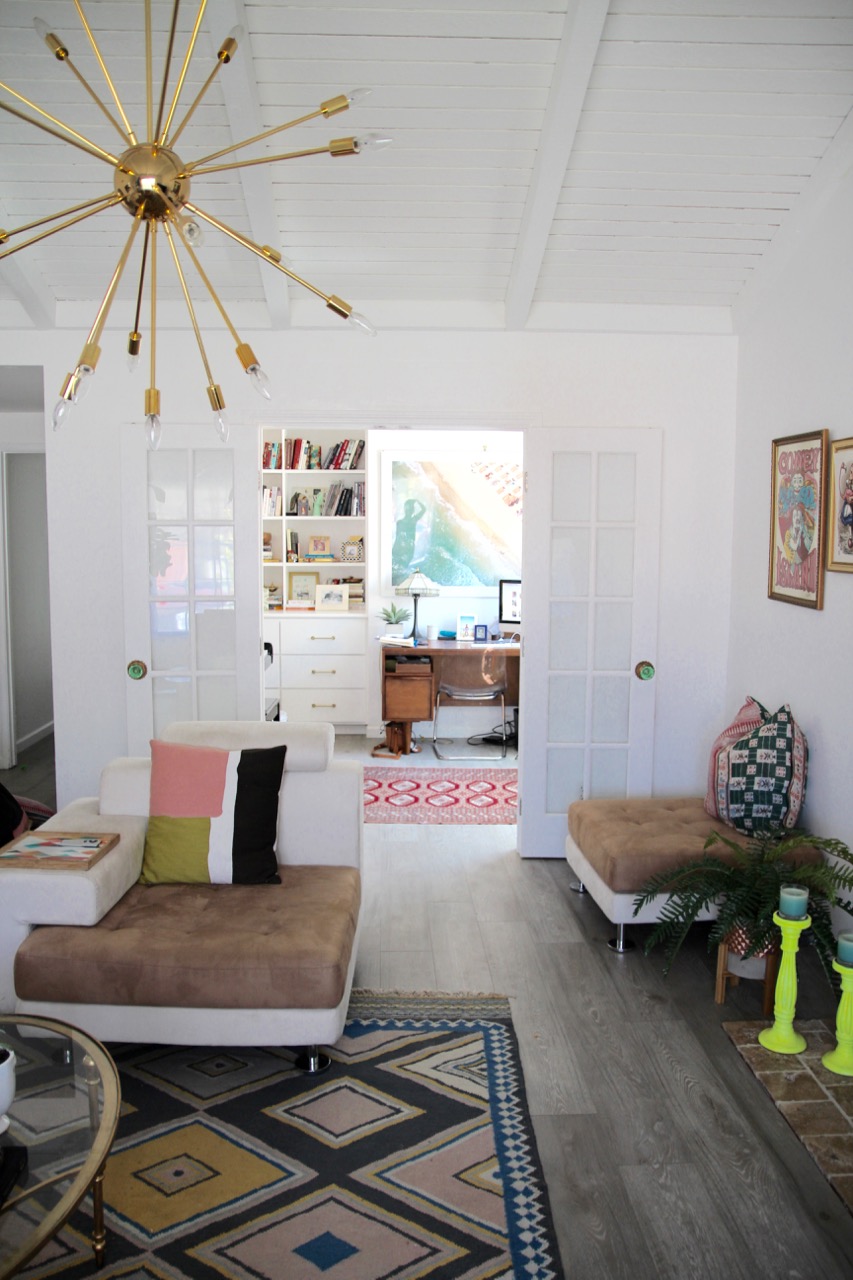 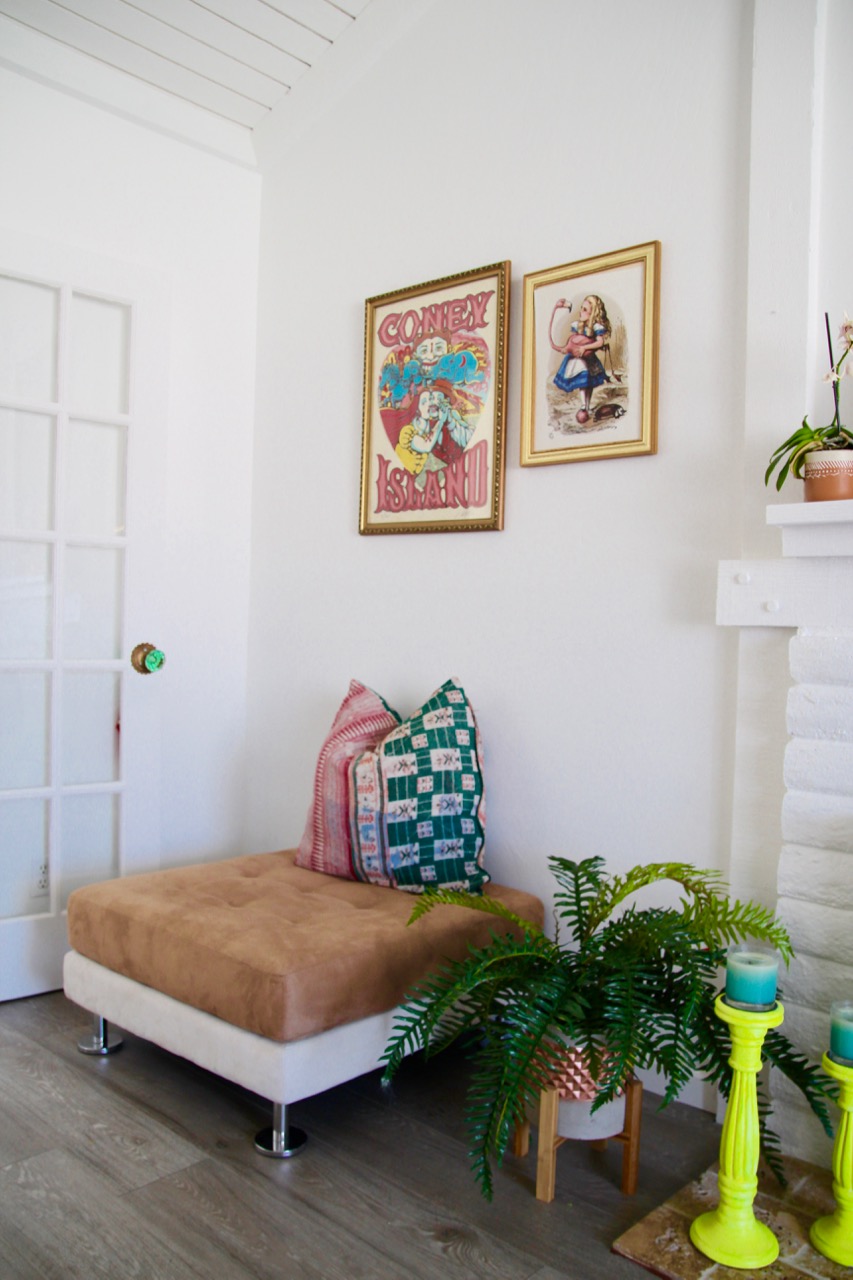 P.S. I have no idea what to do with that ottoman, as you can see. So I put it in the corner; my kids seem pretty happy with it there.

P.P.S. If you like this set, it’s available new from Scandinavian Designs in lots of different colors and fabrics. It is not, alas, $400 if purchased this way.