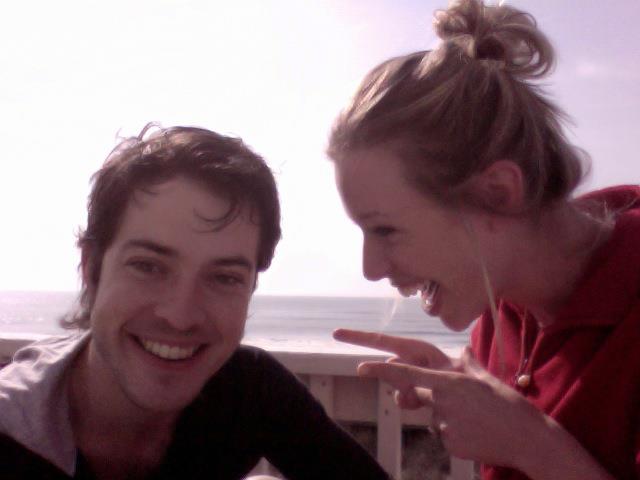 Us, at the beginning

If you’ve been reading here awhile, you’ve already heard my engagement story, so I’m going to apologize in advance for telling it again – but I started out writing this post about what I did to fix up my original engagement ring, which had kind of fallen apart…and then felt like I had to say a sentence or two about our engagement…and then I got all mushy and just kept writing about it and including lots of weird little details that I’d never included before, and now, well…

I’d just like to leave this here. For posterity, you know.

Kendrick and I got engaged about six weeks after we first met – our first date took place during my cat-carrying/modeling job during Fashion Week 2007, and since then we’d spent about 14 days in each other’s company, either on the West Coast or the East. The weekend we ended up deciding to get married, he’d flown out to LA (where I lived) from New York (where he lived) to spend the weekend with me. We’d fallen madly in love in that way that makes you want to smash yourself against the other person and breathe them in; the kind of love where being apart for even a minute feels like torture. (The kind of love, in other words, that probably shouldn’t result in marriage in the absence of things like time and rational thought, but hey.)

A couple of hours after Kendrick landed at LAX we randomly decided to drive to Vegas for the night. We booked the cheapest hotel room we could find, stashed our bags, and then made our way down the Strip. We drank too much bad champagne and chased each other through hotel lobbies and crashed parties in clubs and had a stranger take a photograph of us outside the Hard Rock. I was wearing a vintage white lace minidress that Francesca had given me, because (and I would never have said this to Kendrick, obviously) I was absolutely certain that we were either going to get engaged or married that night. Around 3AM, we decided that we’d eaten enough and drunk enough and been crazy enough, and went back to our room at Treasure Island (super classy, obviously, complete with gold-painted furniture and a mirrored ceiling). Then all of a sudden Kendrick was down on one knee on the crusty carpet, asking me to marry him.

I should have been surprised – I mean, we’d only known each other for a minute – but I wasn’t. He apparently was, though, because when he got to the point where traditionally one might present a ring, he didn’t even have a rubber band, and we got into bed together and laughed and kissed and tried to figure out what to use for my ring: a twirled-up paper clip; a loose string from his shirt; a band drawn onto my finger with the pen sitting on the bedside table.

Then we took my mother’s original wedding ring – a ring that she’d stopped wearing when she “upgraded” during a trip to Italy with my dad and had subsequently given to me – and moved it onto my ring finger, and that was that. Except neither of us was in the mood to go to sleep yet, so we decided there was no time like the present to formalize things. We ran out the door of our hotel room and into the elevator, where we yelled “WE’RE ENGAGED” at a group of drunk bachelorette partiers, and they cheered, and then we hailed a cab and told the driver to take us to a pawn shop.

In the pawn shop, we browsed the diamond ring selection, and finally I pointed and said: “That. That’s the one.” It was a wide woven band with three tiny, differently-sized diamonds on top and little etched lines covering the gold. It was $350, and Kendrick cleared out his bank account to buy it (I mean that literally; the next morning he had to call his landlord – who very fortunately happened to be the drummer in his band’s mother – he was sleeping on their couch – and ask her if he could have a couple more weeks to pay rent because he had just asked a girl to marry him). We left the pawn shop, and on the way out Kendrick got down on his knee again in the pitch-black parking lot, and a man walking by said that if I was being proposed to in a parking lot, I should say no.

We couldn’t get a cab, and so we hitched a ride with a car full of kids who were obviously on hallucinogens (please do not ever do this; it is a bad idea) and who hit us up for cash for gas within moments. When we said we had none, they stopped the car and kicked us out, and so we spent the morning of the day we got engaged walking miles through empty, gray Las Vegas streets while the sun rose, taking photos with a disposable camera and saying “I can’t believe this” over and over and over.

The ring that I first put on my finger that night is one of the small handful of possessions that I cannot be without; it’s on the “save from a fire” shortlist along with my computer and my dogs (perhaps not in that order). Except over the years it’s sort of…languished. Some black spots appeared on it that I was told by a jeweler couldn’t be removed unless the ring was re-dipped, and I didn’t want to do that because of the little etchings. A diamond fell out once, and then again. And so a few months ago I took my ring and stuck it in a vaseline glass bowl sitting on my bookshelf along with a little sparkly chip that I’d found on the floor and had thought was maybe the missing diamond (spoiler: it wasn’t), and just sort of…let it be. I wore random rings on my wedding ring finger (a pink topaz Kendrick bought me in Macy’s during a friends and family sale; my mom’s old ring; a vintage snake ring I found at an antique market in Ohio), or nothing at all.

Then a couple of weeks ago my friend Erin, whose dad was a jeweler, told me where to go – to a jewelry store in Los Gatos owned by her dad’s good friend – and so I took my ring and I went.

Remember how this post was originally supposed to be about what I did to my ring to bring it back to life? That’s coming up in the next post, because a discussion of gemstone shades feels a little off-topic at this point. For now, suffice it to say that my ring is back on my finger. It is more beautiful than ever. And this morning my husband – the same man who asked me to marry him naked and tipsy and kneeling on the floor of a crappy hotel room all those years ago –  snuck out of our bedroom and left me there sleeping. He packed up our beach bag with suntan lotion and Tupperwares filled with prosciutto-wrapped cantaloupe pieces, and then made me coffee and woke me up and took us to the ocean, where he spent the day jumping over waves with our children before getting in the car once again to drive his sleeping family all the way back to a home where happy, weird dogs were barking in the entryway, waiting desperately for us to step across the threshold. And I just feel grateful. Happy. New, even.

I like that the ring that started it all was so odd and imperfect and special; I like that it fell apart over time. I like that we put it back together, fixing what needed fixing, while leaving what was beautiful just so. 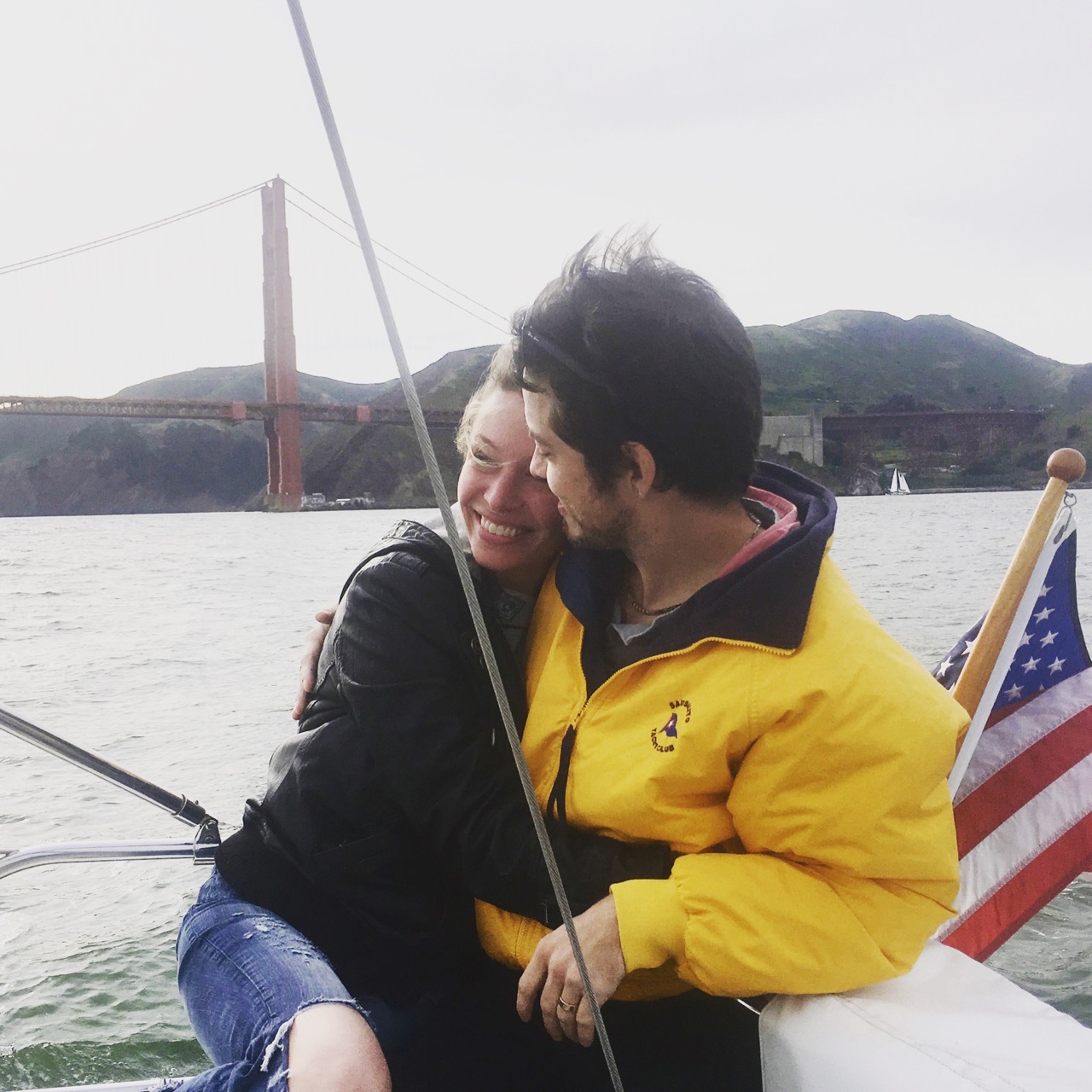