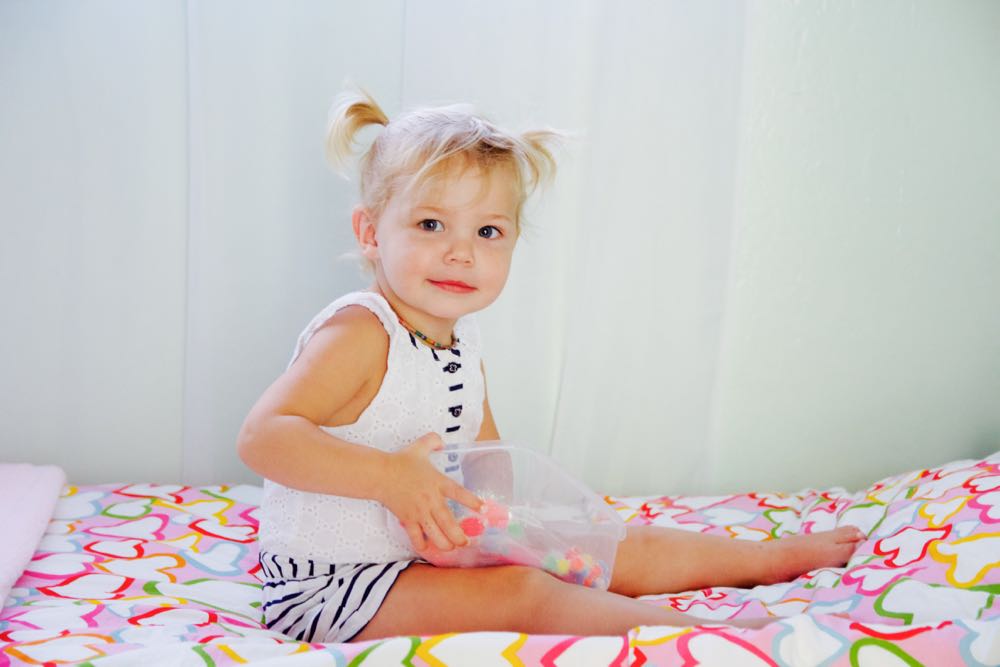 So big I can hardly stand it.

I expected to get a little misty-eyed about seeing my baby girl move out of her crib into a “big girl bed” (aka my son’s old toddler bed)…but she is so freaking excited about it that it made me excited, too. (OK, so I may have cheated a little by putting a pink, heart-covered comforter on the bed. She was ALL ABOUT that thing.)

If you recall from this post, my major issue was that I needed to keep our futon in my daughter’s room for when guests come to visit, but the room isn’t big enough for a futon and a dresser and a toddler-sized bed – I tried, trust me. Kendrick came into the room one night and found me dragging pieces of furniture back and forth trying to find any iteration that worked, and it just wasn’t possible. The solution: we picked up an inexpensive narrow dresser that would fit into Goldie’s closet, and moved her old dresser into our room. The coolest part: the top of a dresser was a changing table, but it was removable – so we just slid it underneath the futon so it’d be out of sight but still accessible for diaper changes until we’re done with potty-training.

Oh, and the other coolest part is her sheepskin rug. It is so soft that I sometimes wander into her room barefoot just so I can stand on it for a minute.

P.S. One note about toddler beds that I wish I’d known at the start: you really don’t need to buy one if you don’t want to (although if you do, this one is very reasonable and nice and simple). You can go straight from a crib into a twin bed and add a rail yourself…orrrr you can just tuck a styrofoam pool noodle in between the fitted sheet and the mattress, so it creates a discreet-looking barrier. (This really works; I’ve done it myself.)

P.P.S. While putting together the below widget of places to find items similar to the ones I used in Goldie’s bedroom, I came across a child’s toy not unlike one that we own…except it costs nearly two thousand dollars. That seems reasonable. 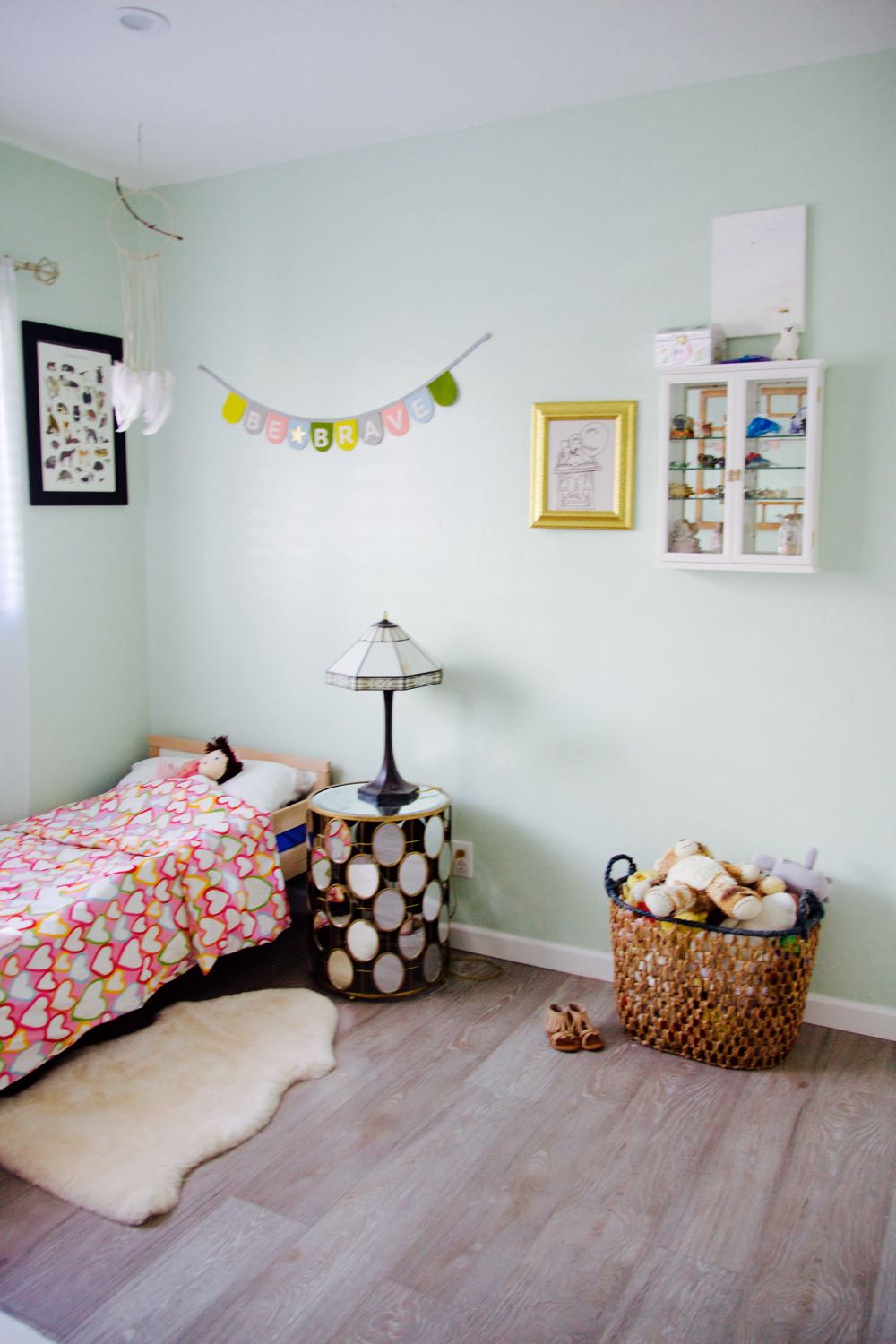 My daughter is all-pink, all-the-time, so I had to include the color despite the fact that I’m not a big “pink” person myself. I love that it’s pretty and obviously a little girl’s room, but still not frilly at all. 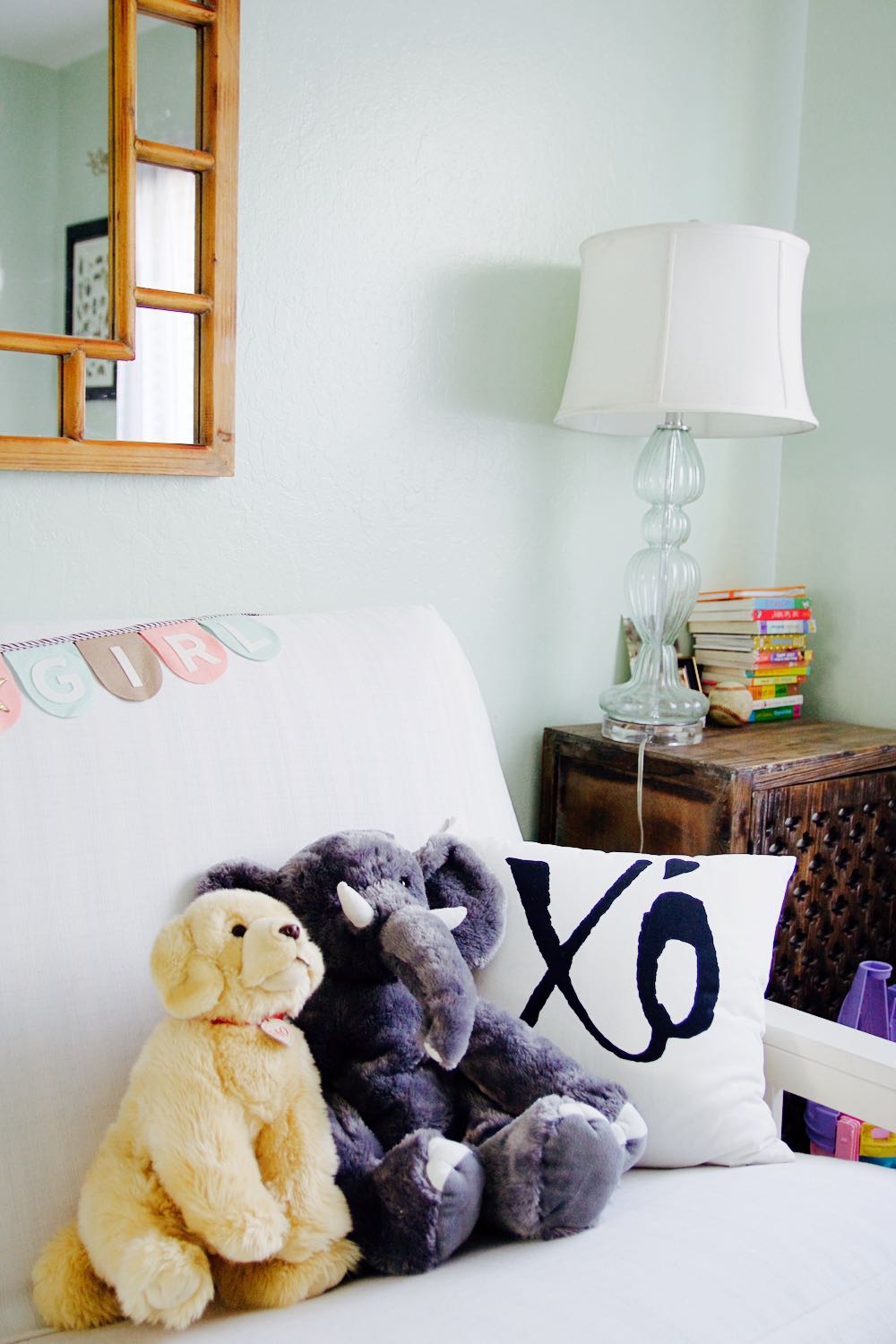 While it would be lovely to go out and buy an all-new set of furniture for a room, that’s obviously not in the budget – so I pulled in pieces that used to live in other parts of the house (a seafoam-green lamp from my office; an XO pillow from our bedroom, etc). 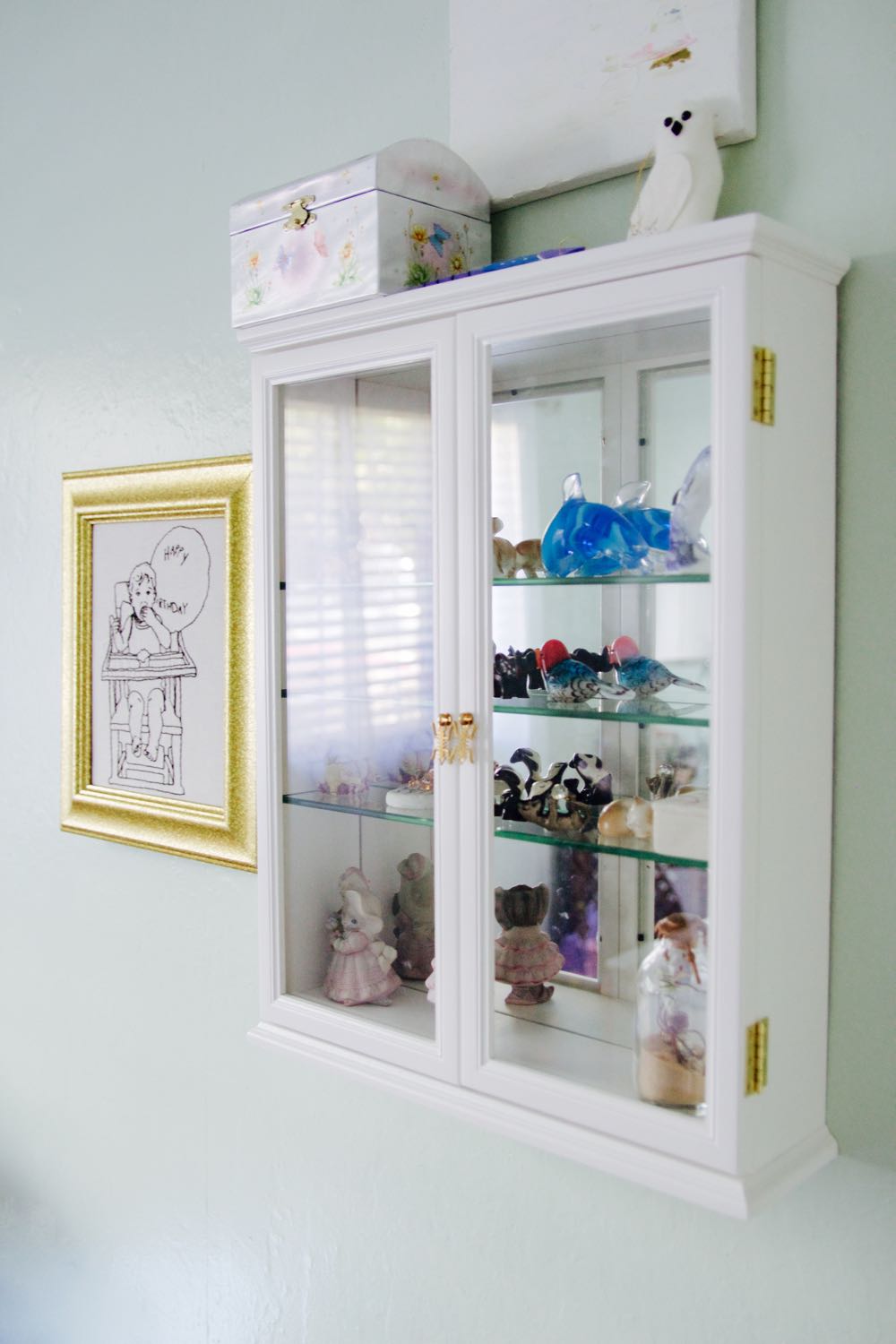 When I was a little girl I collected crystal and china figurines, and I was so, SO excited to put my old collection into a cabinet I hung on the wall, along with a few new pieces to get my daughter started on her own collection. 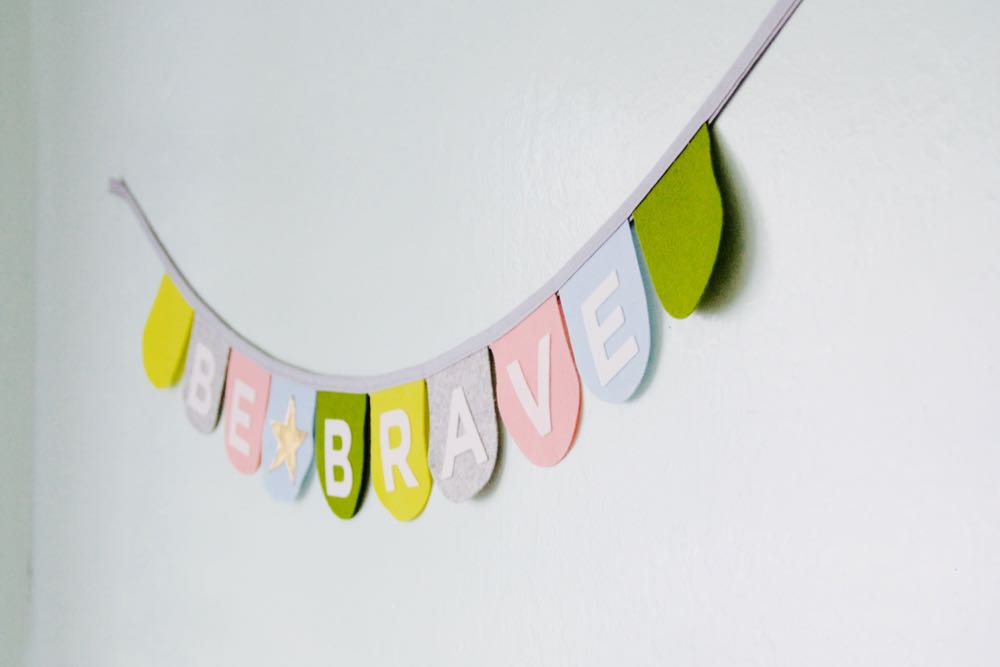 This banner (made exclusively for glam | camp by Maypole) was originally in “boy” colors, and the “Make Magic” banner was in “girl” colors. We switched ’em. 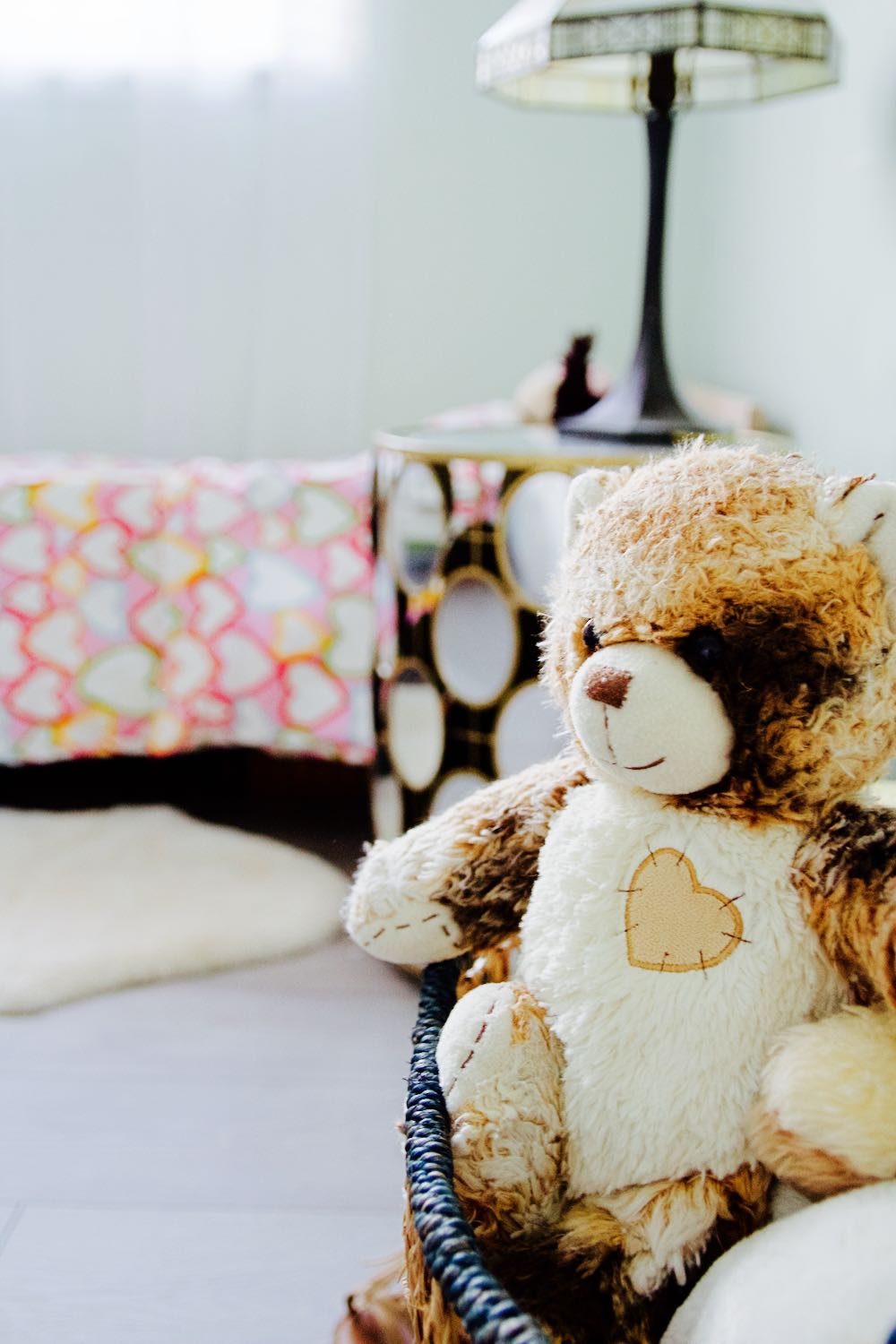 This is actually Indy’s bear – we bought it for him on our very first (but not last, oh no) trip to Build-a-Bear, when he was just five weeks old. He doesn’t seem especially enamored with it, though, so it’s become his sister’s by default. 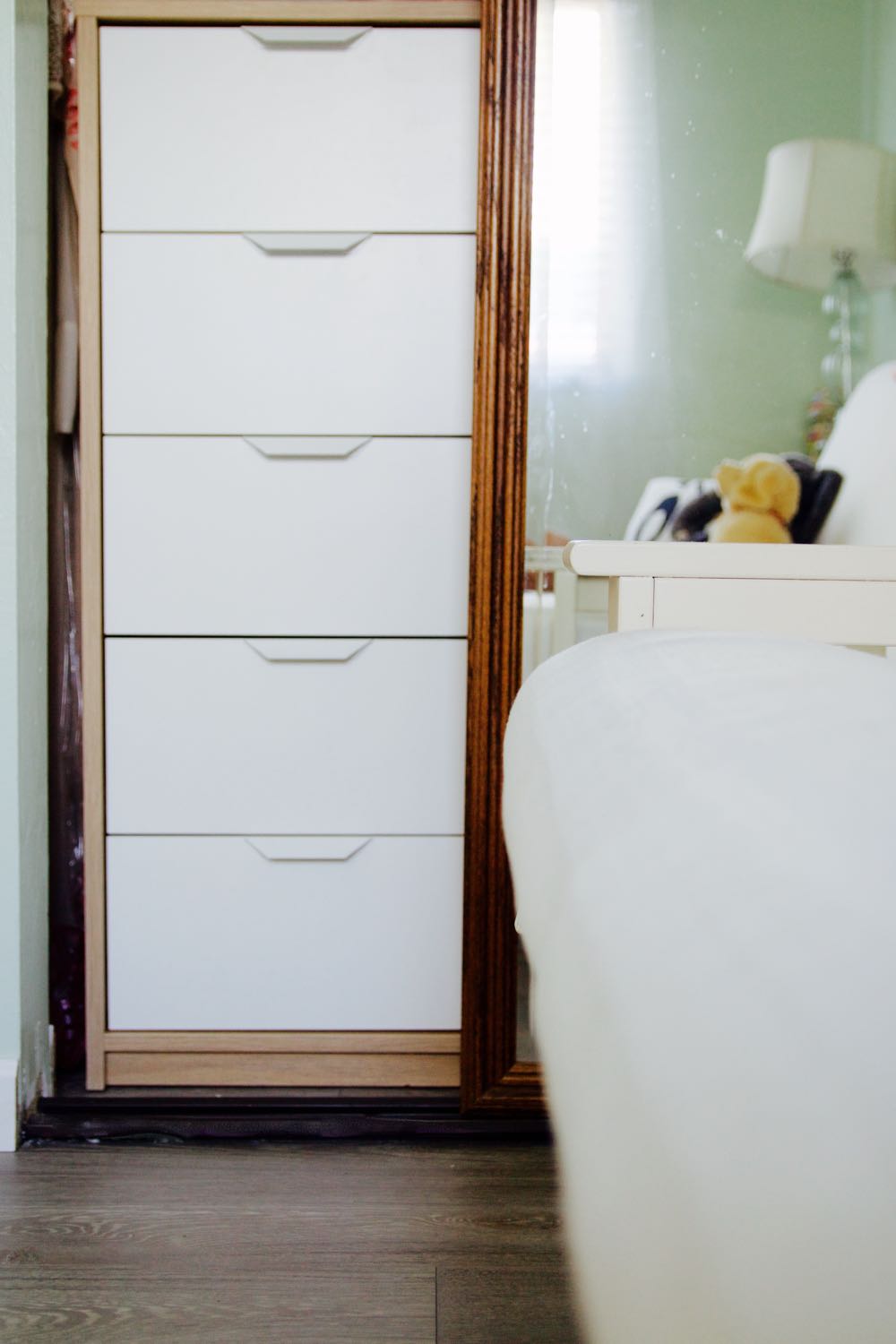 This Ikea dresser is tall and narrow and a great space-saver, in addition to being super inexpensive. 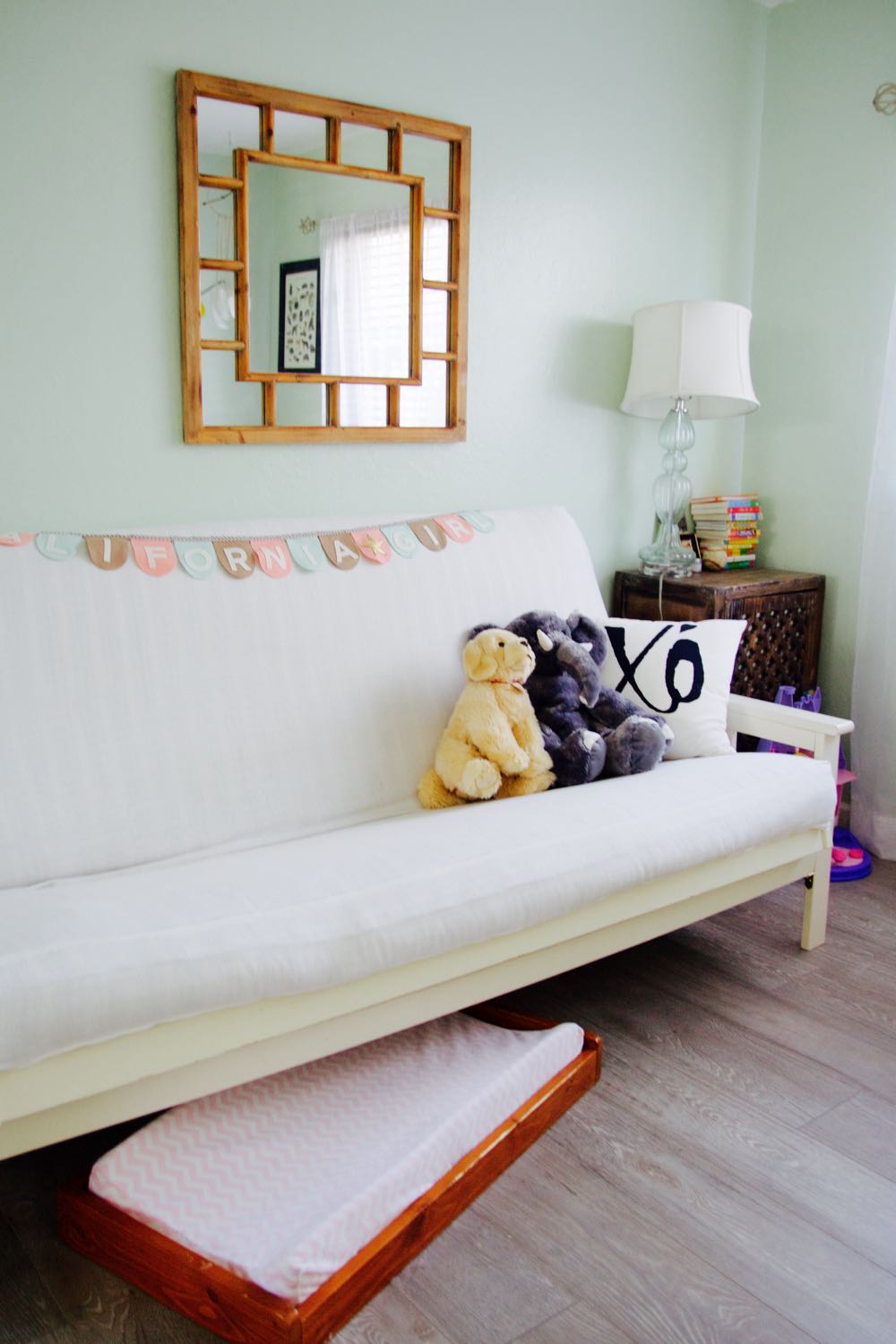 That changing table used to sit on top of Goldie’s dresser, but we separated the pieces. We put the dresser in our room, and stashed the changing table part under the futon for diaper changes (which we hope won’t last much longer). 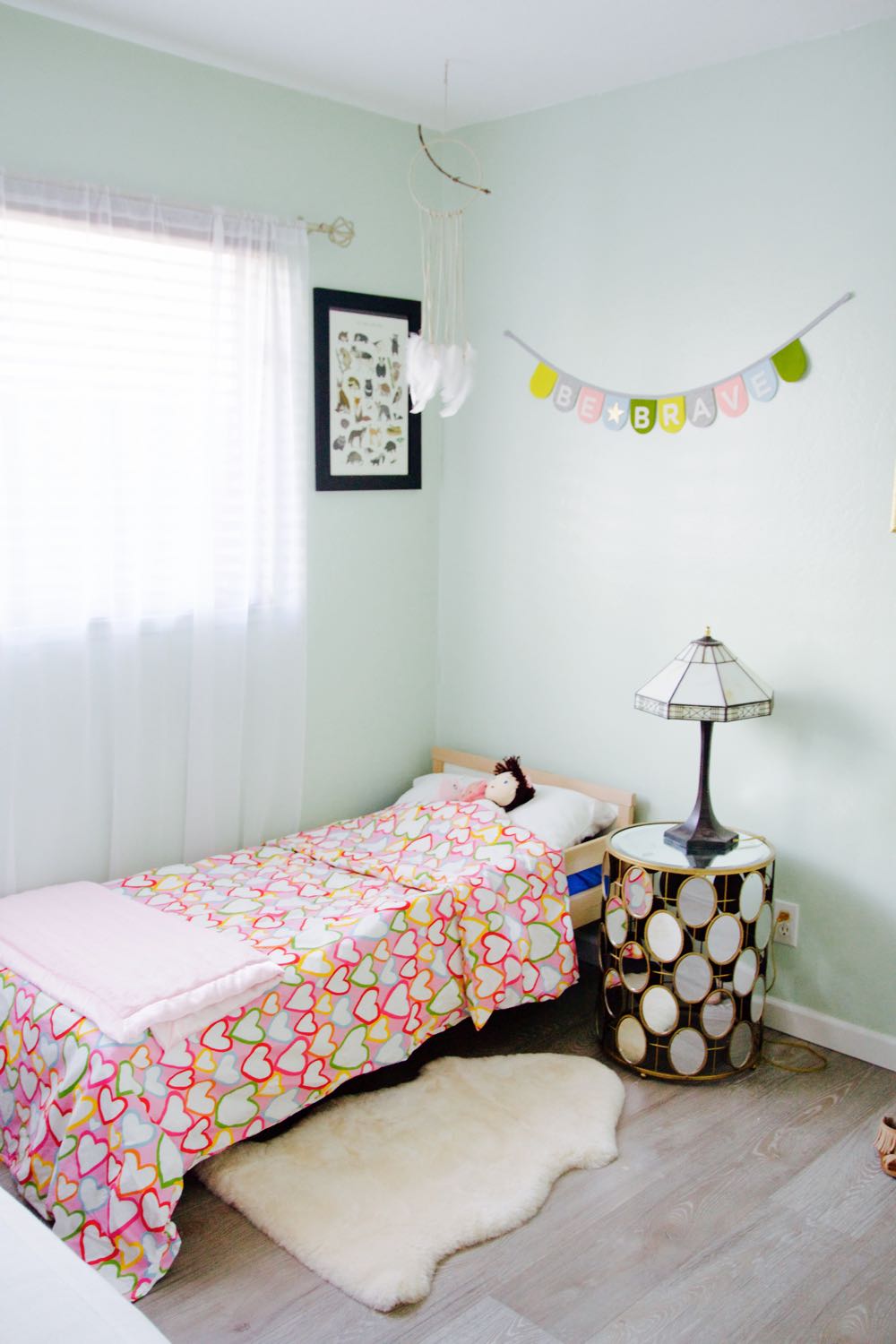 I really do love it. (But the best part is that I think my girl loves it even more.)