I Have Conquered The Ikea 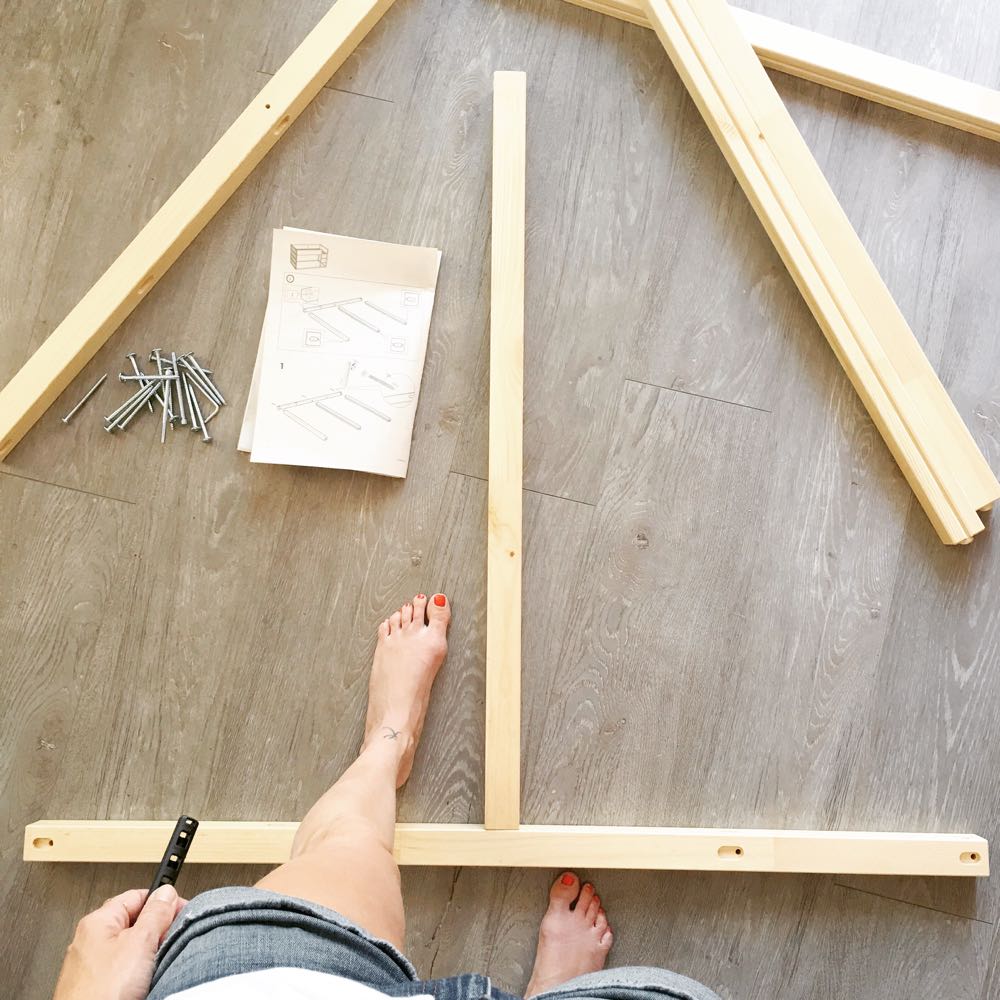 My son would like to know if he can sleep in his new bunk bed tonight.

I am guessing the answer is no. #sendhelp #andsnacks

You want to hear something super annoying? Yesterday I was about an hour and a half into assembling my son’s new lofted bed (the solution that most of you suggested when I asked what I should do about getting a twin bed into his tiny bedroom), and I was completely ready to give up. I was pouring sweat (I hadn’t realized that furniture assembly constitutes cardio, but apparently: ayup), I could not for the life of me figure out what the random black plastic thing in my hand was supposed to do, and I had managed to somehow lose a seven-foot-long piece of wood that was a tiny bit essential to the construction process.

Howwww do you lose something that is SEVEN FEET LONG?

The fact that this is something I am entirely capable of doing is one of the many, many reasons why putting together items from Ikea has historically fallen into the category of Things I Do Not Do. I first arrived at this conclusion when I moved to Los Angeles at 22 years old and bought an entire one-bedroom apartment’s worth of furniture from Ikea. I sat down and started to help my dad put together the bed, spent twenty minutes creating something that far more closely resembled a medieval club than the bed leg that it was supposed to be, and then decided to set up the cable instead. If I am actually electing to spend 200 hours on the phone with a customer service representative, you know I’m really unexcited about the alternative.

In the years since, whenever we have purchased something from Ikea I have either paid someone to assemble it for me so that I don’t have to cry, or have put Kendrick in a room with an allen wrench and many, many caffeinated beverages, closed the door, and tried to ignore the fact that he is emanating fury-rays at me through the walls while making him Rice Krispie Treats as a peace offering.

I have actually put together one item from Ikea all on my lonesome. It was a chair. It had two parts, and I kind of screwed it up.

The Ikea Kura Lofted Bed consists of – and this is a ballpark figure, but I think it’s pretty close – 250 parts. You tell me what the chances were that I was going to make this happen. Zero, correct. And so, about an hour and a half into the process, around the time when I lost the seven-foot-long pole, I told my son I thought I was going to have to get some help with this.

And then the super-annoying thing happened.

“But mom,” he said, “don’t you want to finish it so you can be proud of yourself?”

(I’m going to have to have a serious conversation with his preschool teacher about this whole “encouraging perseverance” thing.)

So obbbbbbviously then I had to be a Good Parent and Set An Example. I spent the next four hours sitting on the floor of my son’s room in the company of an allen wrench that I quickly grew to hate with the heat of a thousand suns, huffing and puffing and pulling muscles in my back and banging my head on things and cursing very loudly in a very not-good-parent way but whatever, and then, just five minutes before Kendrick came home… 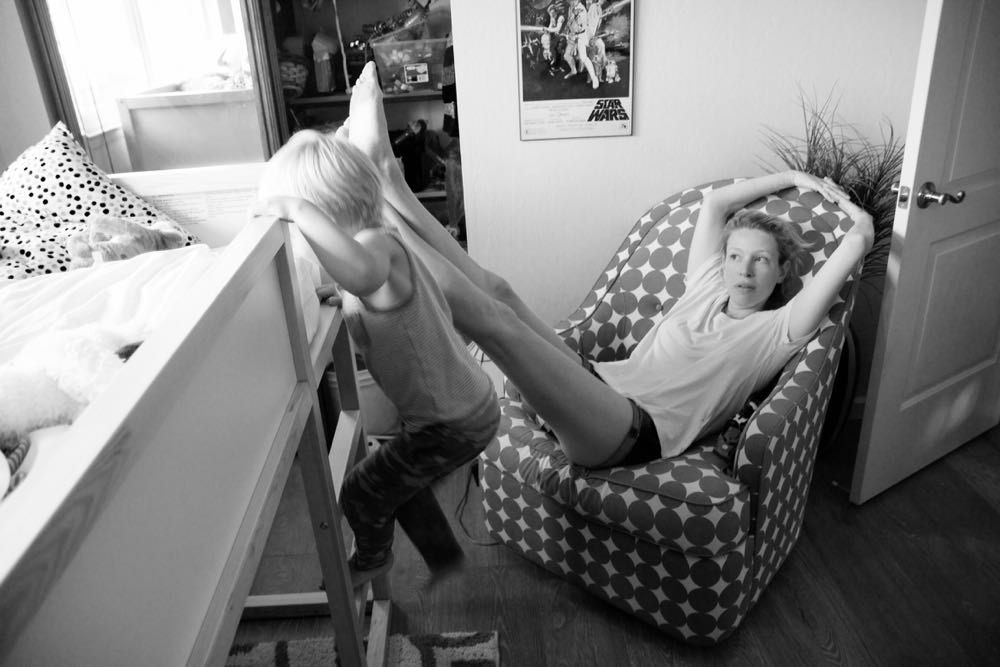 When you spend five-plus hours in the company of Ikea parts, you are so tired that your face appears to be actually sliding off of your body.

I MOTHEREFFING DID IT. (See? I said “effing.” Like a good parent.)

(I’m totally proud of myself.) 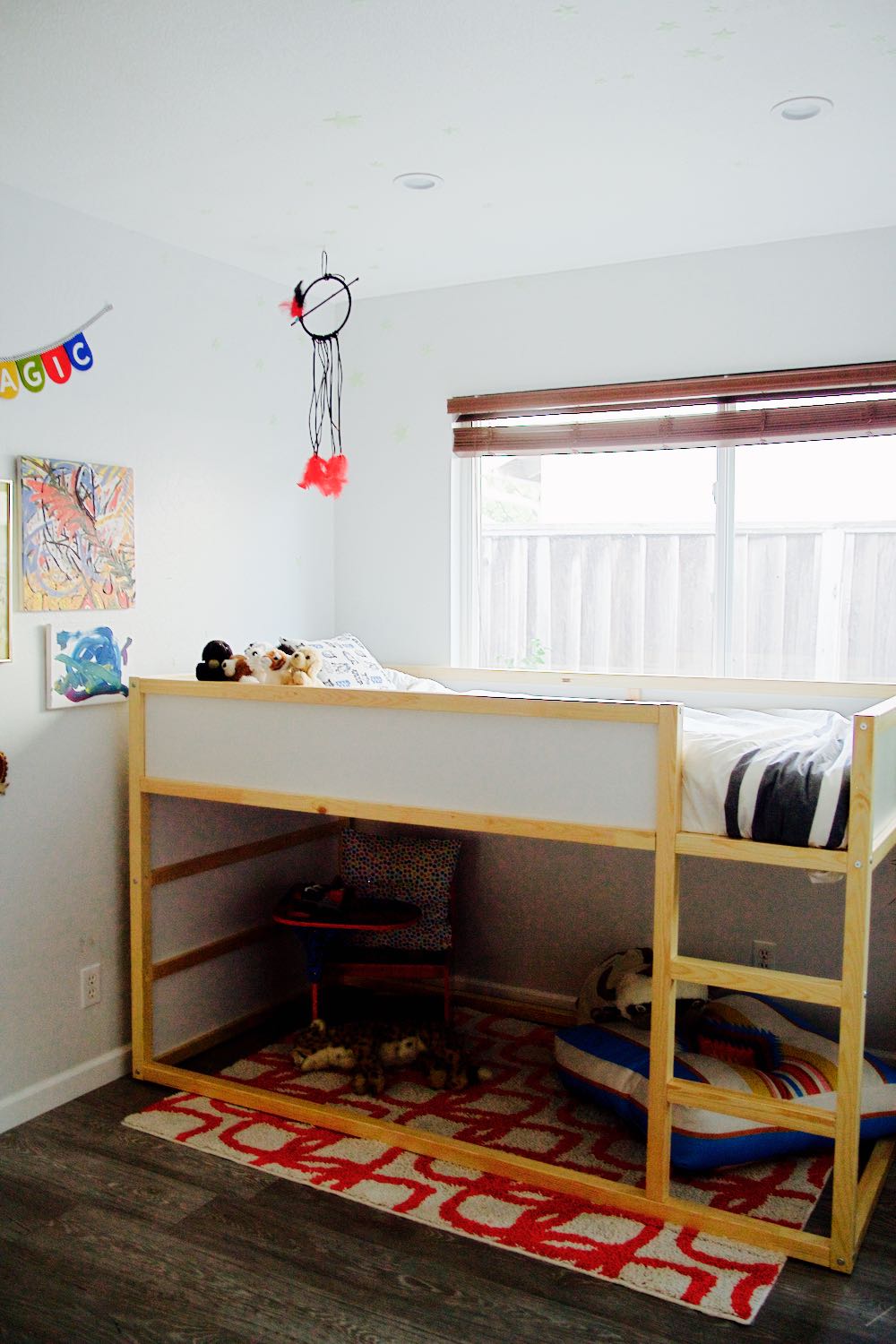 So the room isn’t done-done – I’m going to play with the decor a bit, paint the bed white, add lighting underneath the bed so it’s not a pitch-black play-cave, etc – but so far I’m thrilled with the addition of the bed. I had planned to use the space underneath the bed to hold Indy’s dresser, but discovered that the additional floor space made the room feel so much more spacious that the dresser could actually stay put, freeing up the spot underneath the bed as a play area (or sleeping area for a friend during sleepovers). And if Goldie and Indy decide they want to share a room, her toddler bed 100% fits underneath – which isn’t a possibility I had even considered, but there you go.

Seriously, the room looks like twice as big as it did before. And my son has a bunk bed! (I always wanted a bunk bed and am completely living vicariously through him right now.) 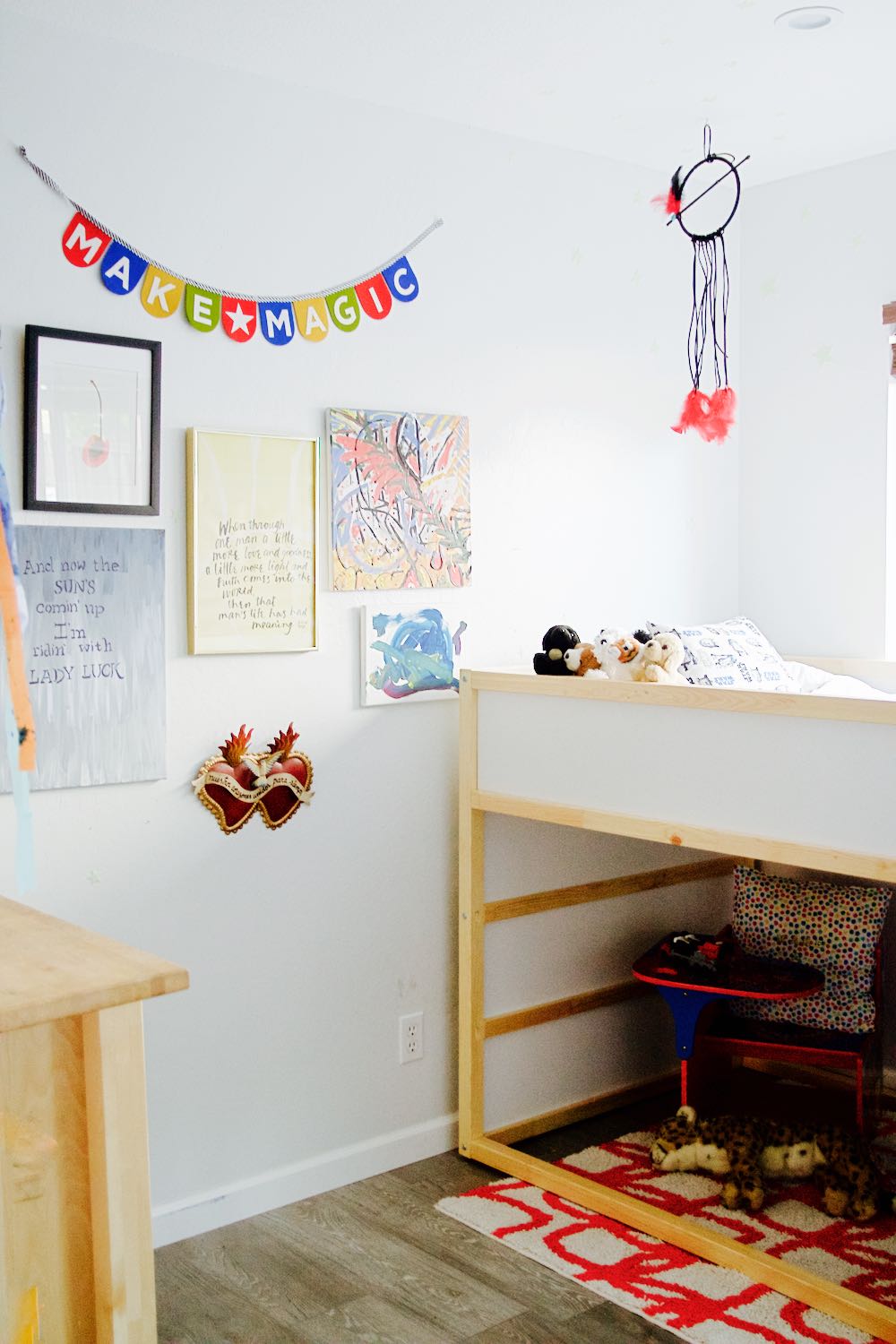 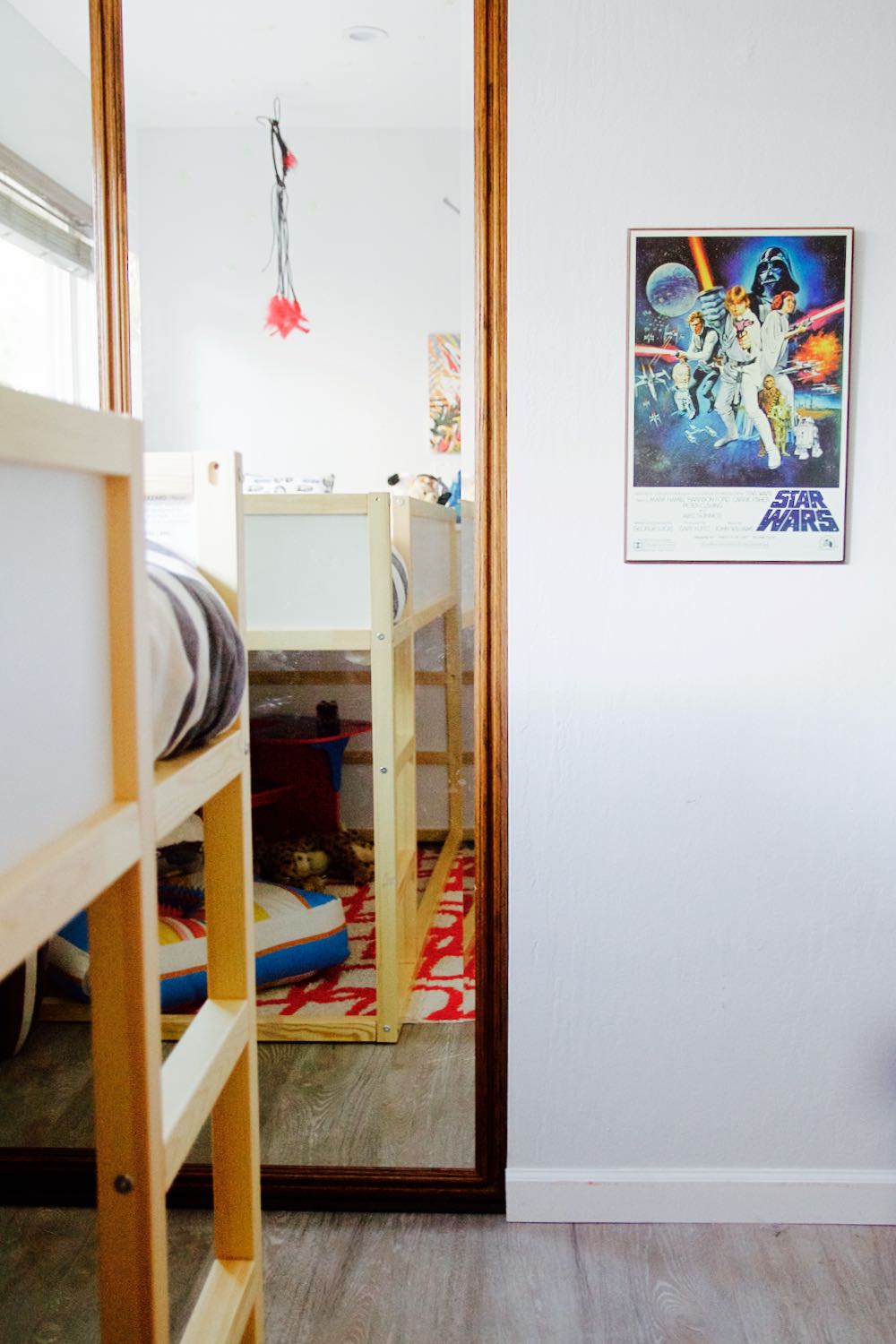 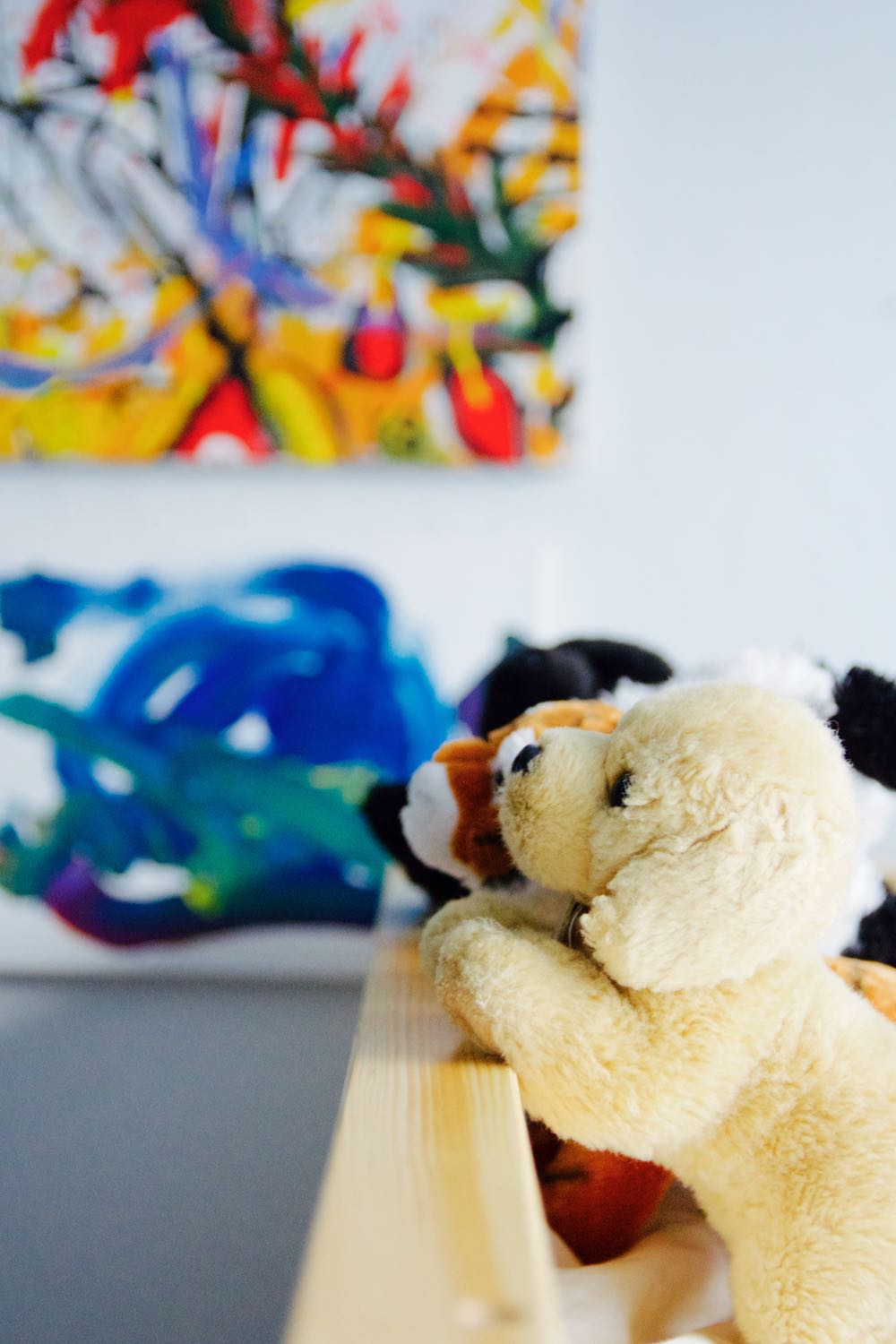 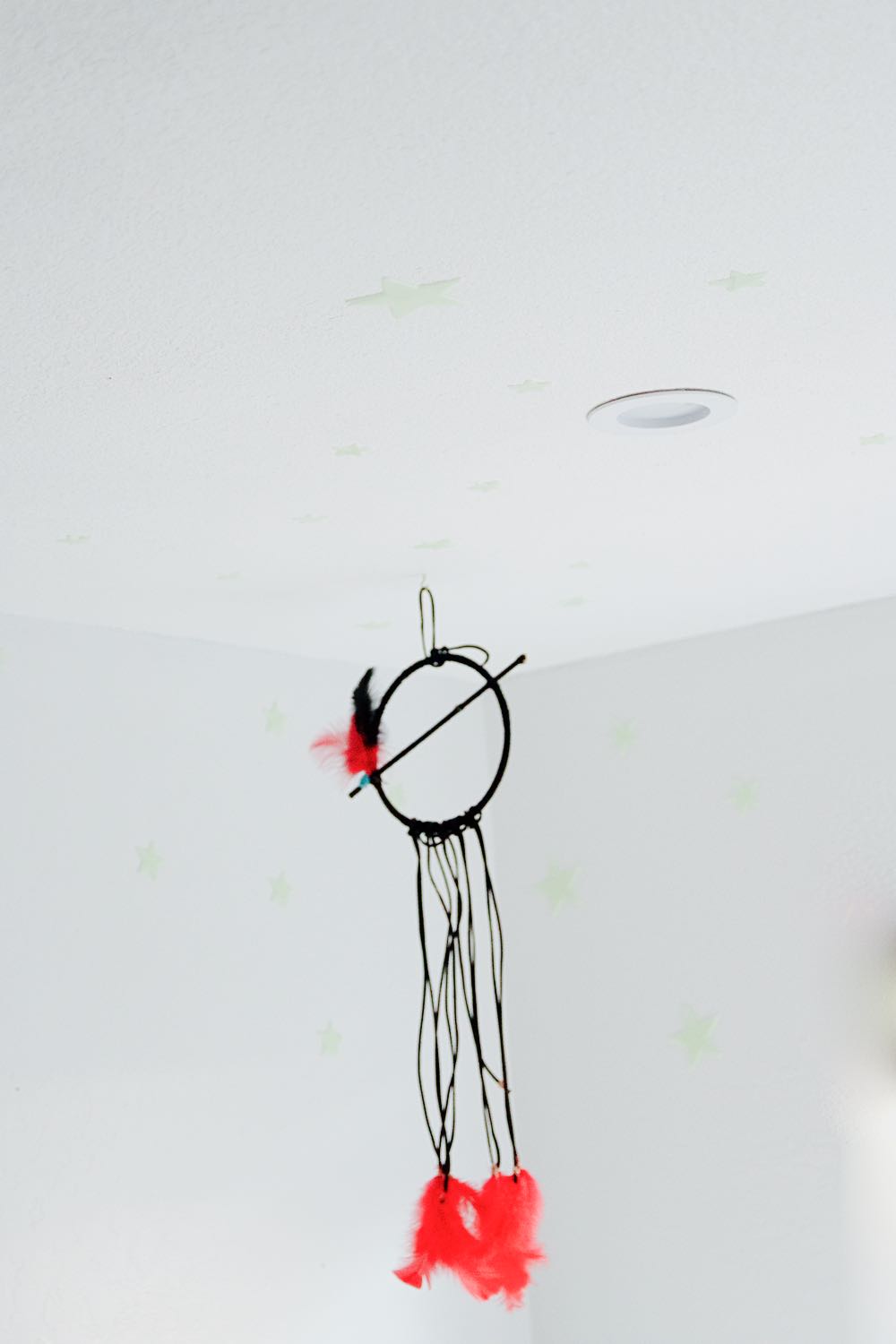 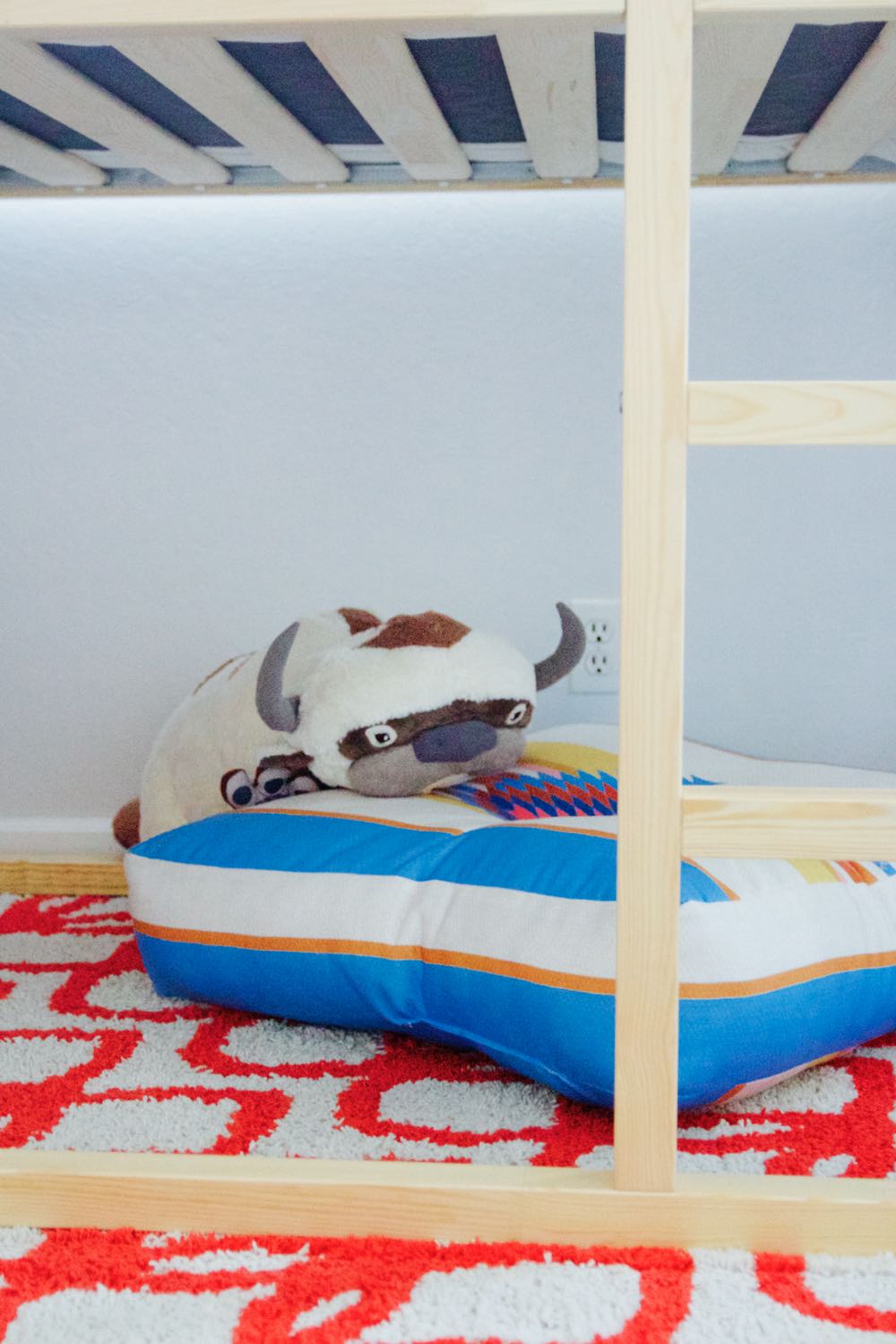 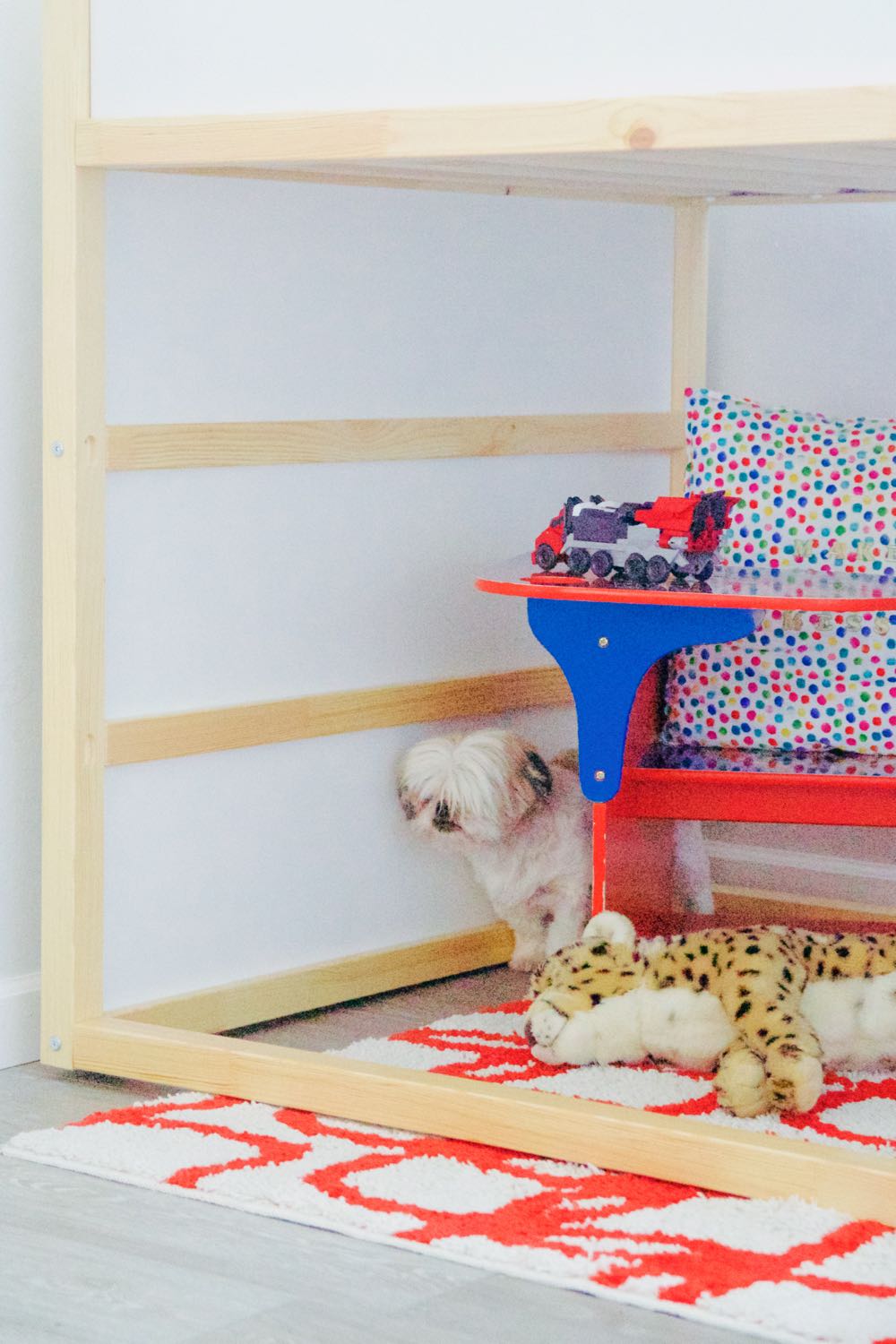