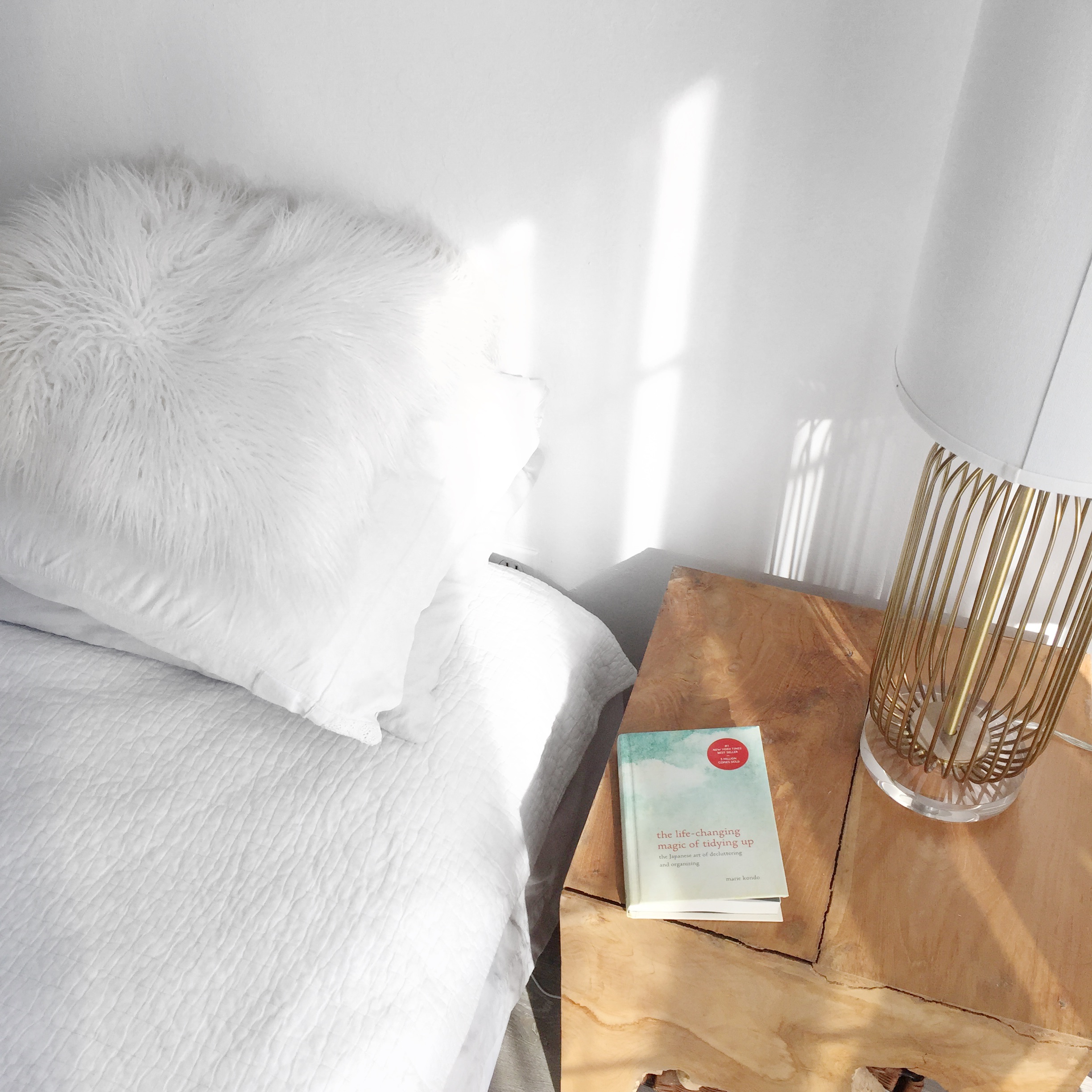 I went into The Life-Changing Magic of Tidying Up – the New York Times Bestseller that’s getting a ton of attention in the press and spawning entire movements – with a healthy dose of skepticism. Partially because…well, “life-changing”? I mean…come on. But mostly because I’m huge on throwing stuff out – it’s literally one of my favorite things to do – and I suspected that her tips wouldn’t be all that revolutionary to someone who’s already drunk the “if you don’t use it, get rid of it” kool-aid.

I mean, really: I’m constantly paring down the amount of stuff I have (which is considerable, I admit, in large part because I’m always picking up props and such for shoots). I give things away to friends; I sell them; I donate them to Goodwill. I can’t stand having items that I don’t use or need laying around. And yet, after maybe three hours of culling through my possessions using the philosophies contained in this book: 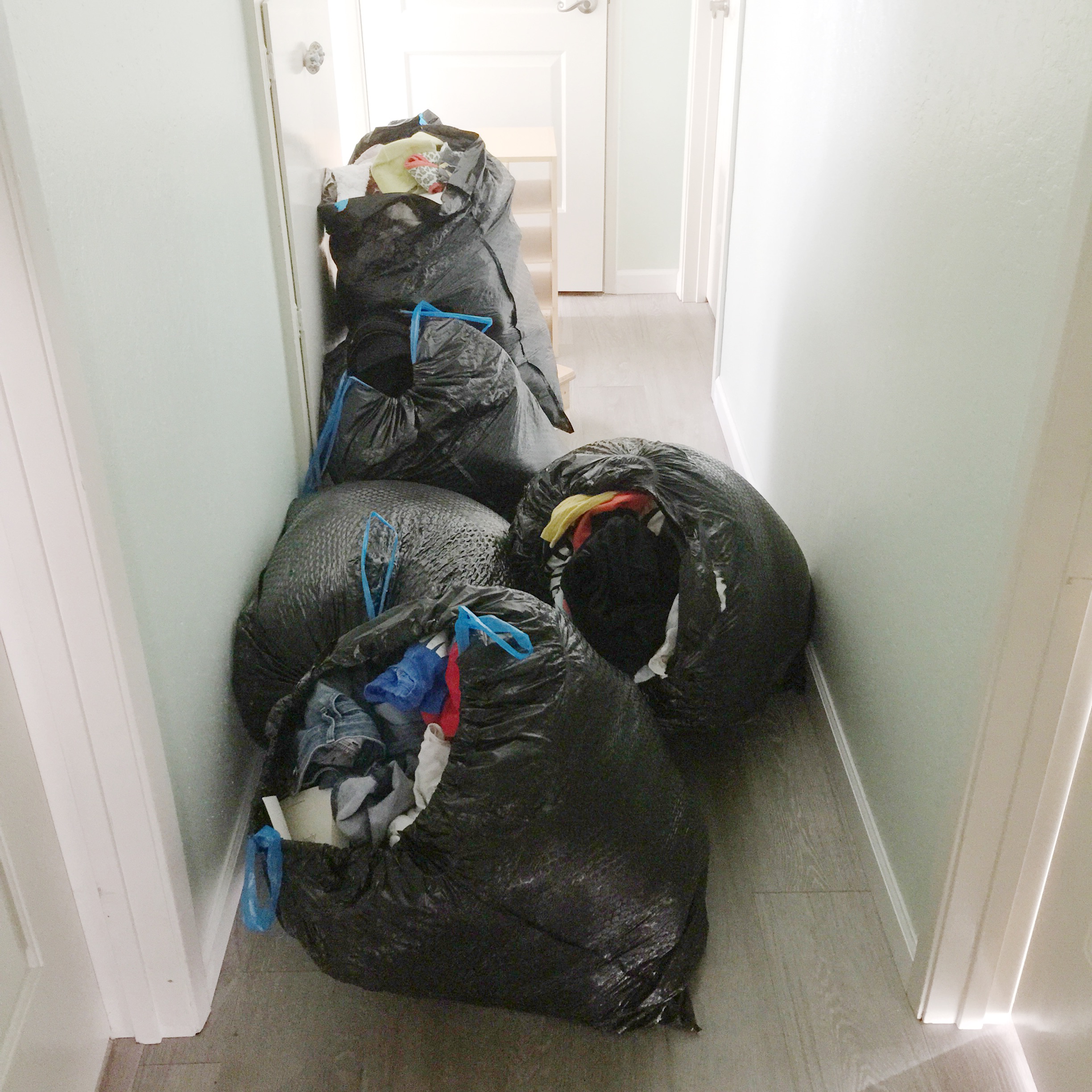 Just to be clear, these are REALLY big trash bags.

That, by the way, does not include any of Kendrick’s stuff: that’s just mine and the kids (and most of it is mine). It’s also about half of what I ended up carting to Goodwill yesterday afternoon, and I suspect about a quarter of what I’ll end up discarding when all is said and done (by which I mean after I attack the garage).

I am exaggerating zero when I tell you that this book has actually changed my life, or at least my perspective on my stuff (and I think we can all agree that “stuff” has a tendency to take up quite a lot of head space).

That is SUCH A WEIRD THING TO SAY.

But the book isn’t just “advice” – it’s philosophy. I put it down one evening, and immediately began tearing through the house because I could not wait one more moment to get started. And 24 hours after my initial purge, for real: I cannot believe the extent to which these slight adjustments in perspective have affected both the way my home looks and feels…not to mention my head.

Let me first be clear about one thing: some of the author’s advice is flat-out nuts. There’s a big to-do about how clothing has feelings and gets bummed out when other clothing is piled on top of it, and how balled-out socks get stressed so you should fold them, and how you need to “release” your unused clothing so that it can be happy. I can’t quite get on board with the concept of stressed-out socks, because they are socks. They do not have to worry about this month’s water bill. However, I do think that our possessions create emotions in us, and that giving the things that you surround yourself with a little room to breathe makes you feel the same way: free.

Now that we’ve established that I will not be gently laying my perfectly folded socks side-by-side – like, ever – let’s get to the good stuff. Here is the my favorite takeaway from the book; the one that I’ve been coming back to over and over and over:

When you come across something that you cannot part with, think carefully about its true purpose in your life. You’ll be surprised at how many of the things you possess have already fulfilled their role. By acknowledging their contribution and letting them go with gratitude, you will be able to truly put the things you own, and your life, in order. in the end, all that will remain are the things that you really treasure.

In short: Our lives are filled with things that have already done for us what they were intended to do…and by keeping them around, all we’re doing is obscuring our view of what we really do love and need.

So. Here’s what happened to my house (and my head) after reading this book. 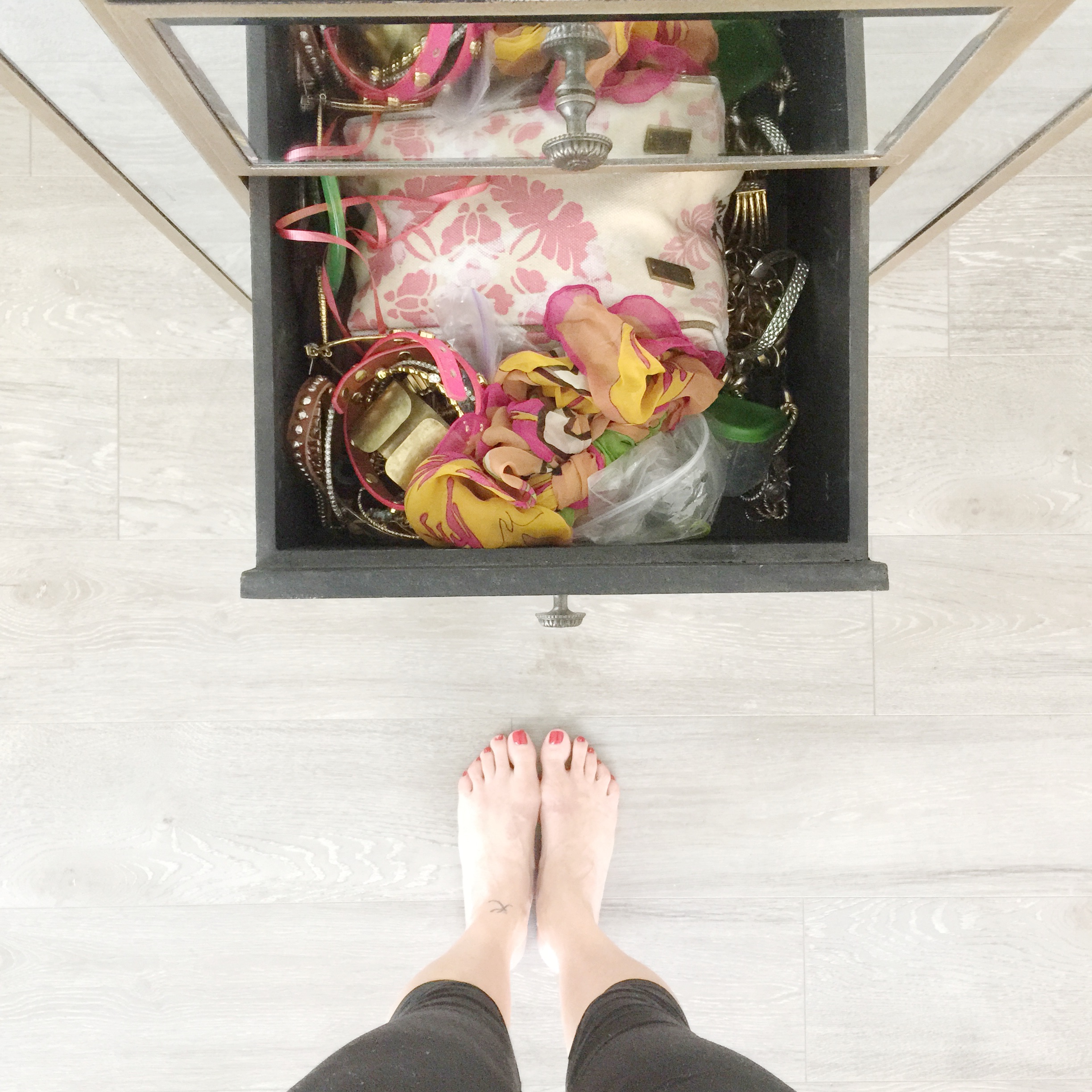 One of three drawers’ worth of costume jewelry and scarves that I’ve been keeping “for my daughter one day.”

I LEARNED WHY I WAS HOLDING ON.

As I sifted through my things (albeit in a less dramatic fashion than the everything-in-the-middle-of-the-floor bonanza that the book recommends) I realized that there are four primary reasons so many of my possessions were making it past countless decluttering sessions, getting trucked across the country again and again while remaining almost entirely unused. 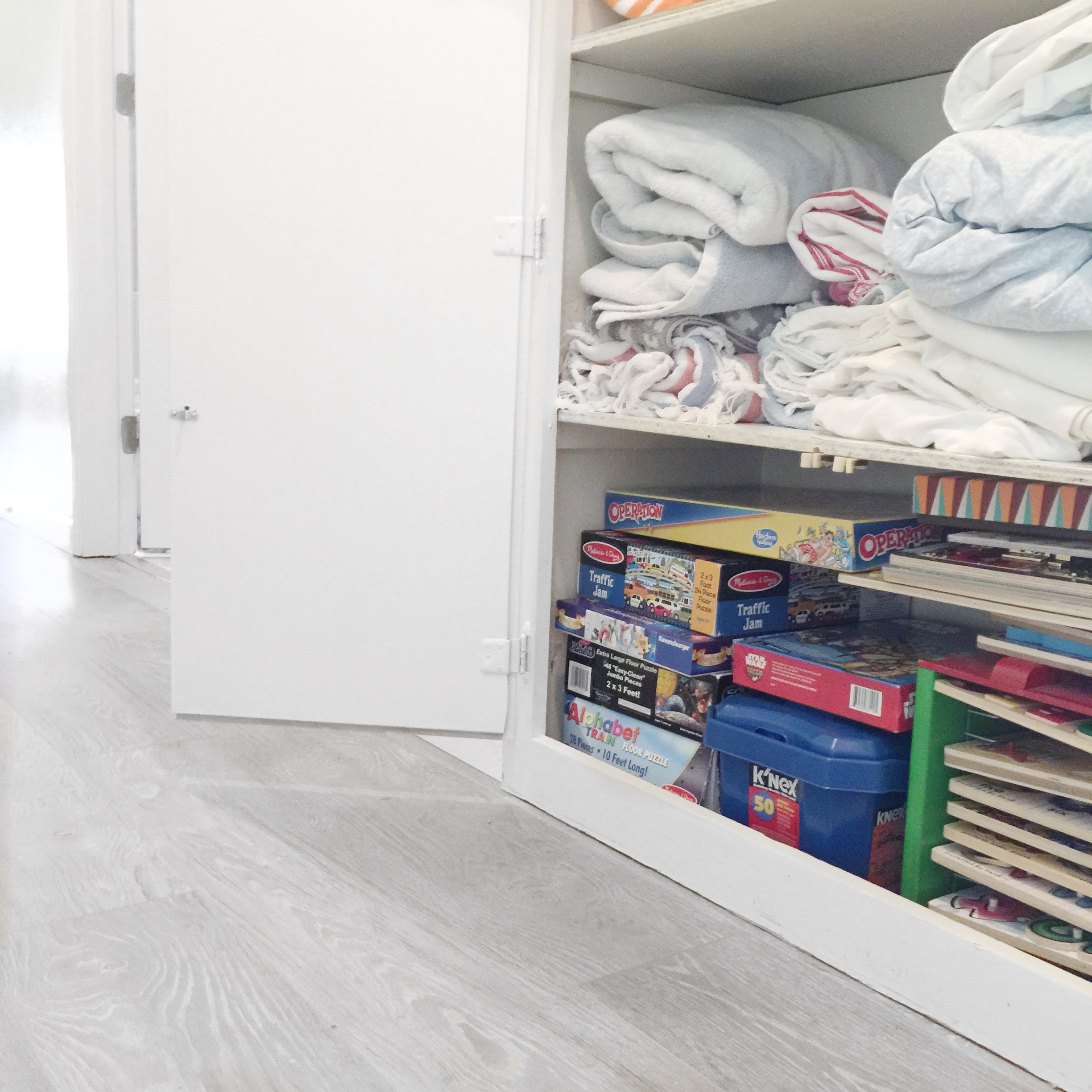 I freed up so much space in our linen closet that it now doubles as game storage, woooo.

I LEARNED WHAT TO LET GO OF (AND HOW TO LET IT GO).

A brief smattering of some of the items that I donated yesterday afternoon:

– Some really cute (and expensive) stuff that I bought at Destination Maternity when I was pregnant with Goldie. Why I held onto it: Because it’s cute. And expensive. And “totally works as non-maternity wear.” Why I let it go: I have literally never worn a single piece of it post-pregnancy. Because it’s maternity wear. 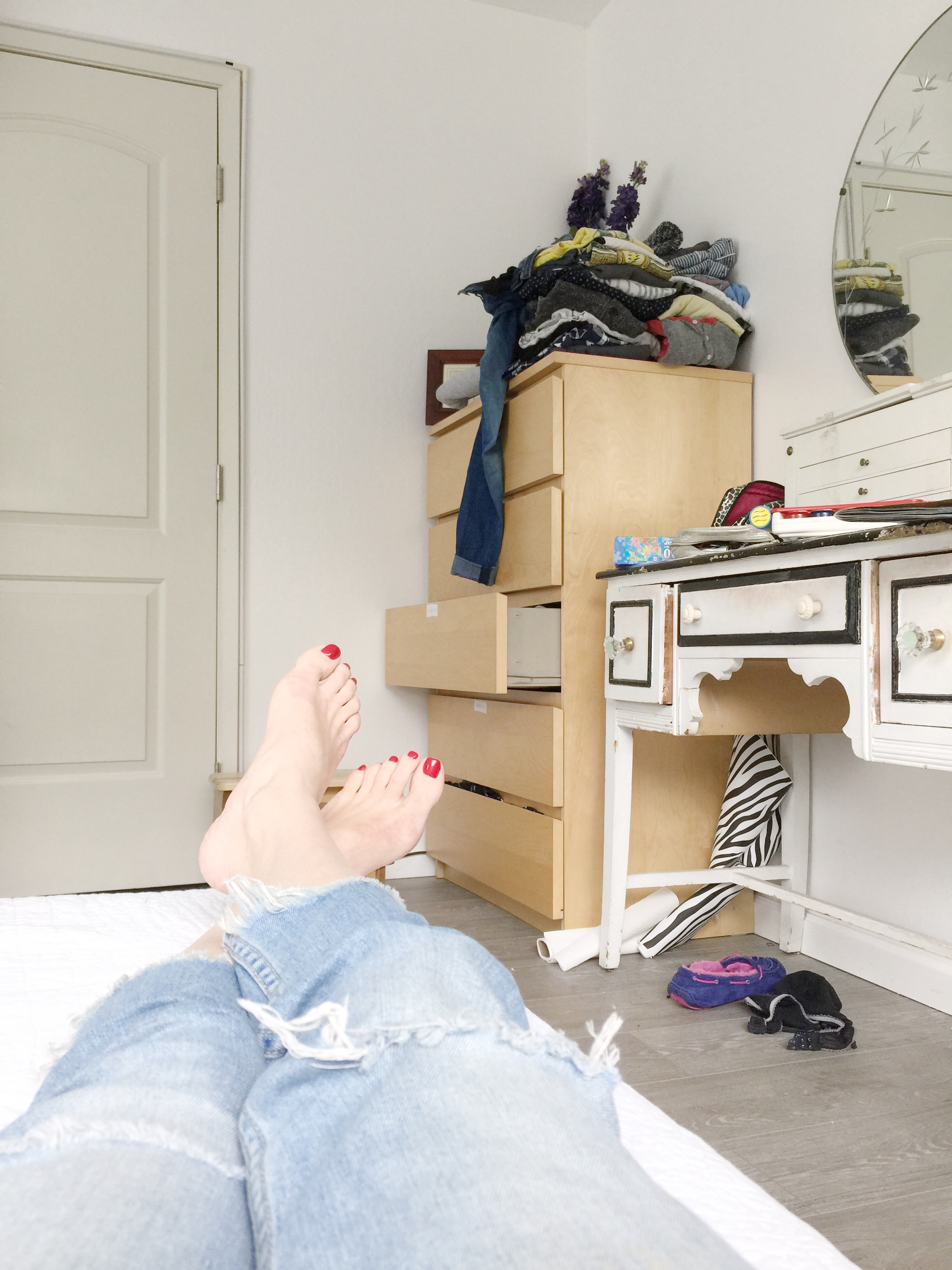 And finally: here is a corner of my room that I don’t know if you’ve ever seen before. The reason you haven’t seen it is pretty obvious, I think; it’s tucked away behind my bedroom door, and so it ends up being my junk-pile spot – the area where I put the things I don’t feel like putting away right now, or that have no real place to go. Overstuffed drawers. My son’s puzzle. Papers upon papers. A bra that I should really throw out but haven’t yet. 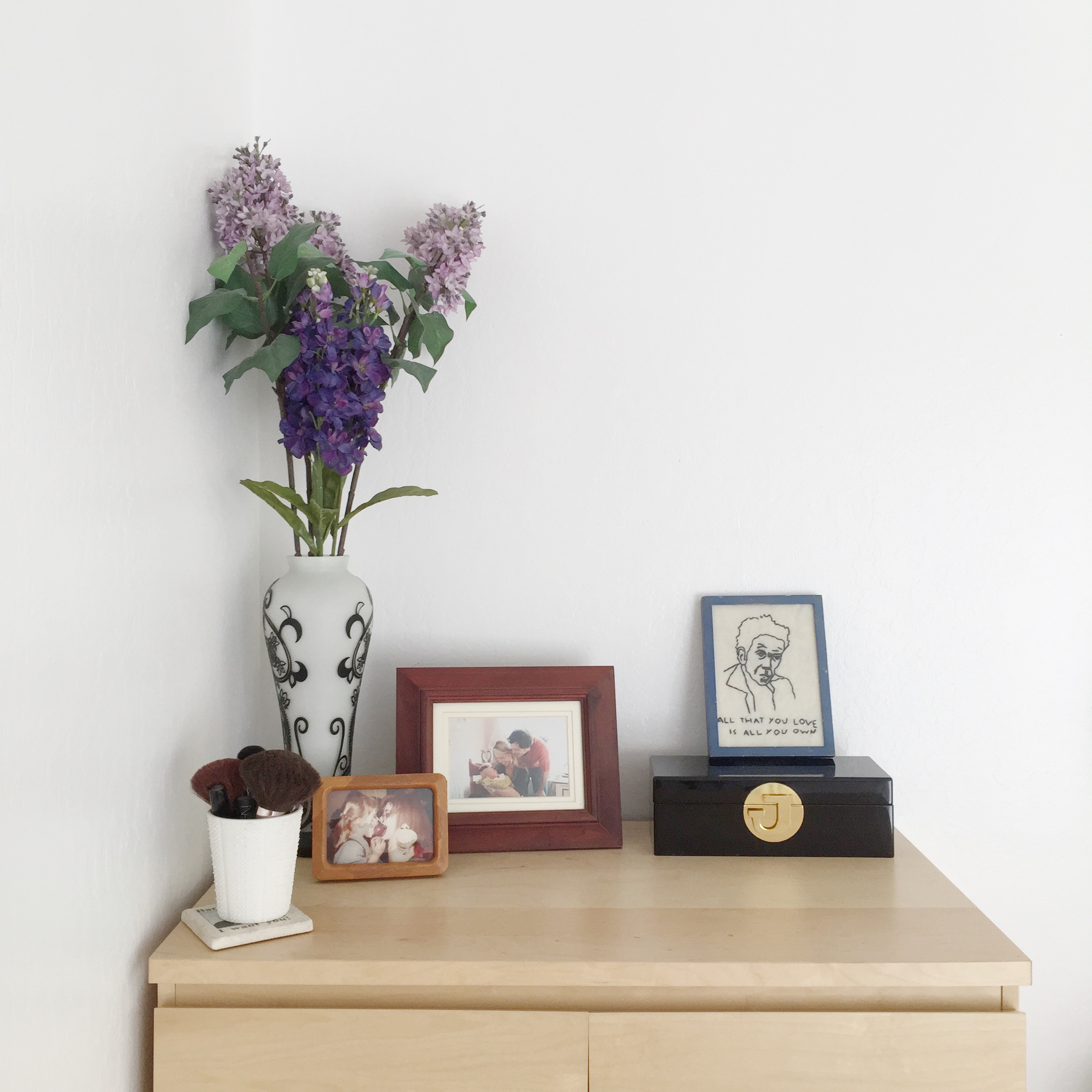 I used to avoid looking in the direction of this dresser when I was laying in bed, because all it did was stress me out: it was just a pile of crap that I wasn’t dealing with. And now, when I’m laying in bed and my glance falls on that corner, what I see is a handful of things that I genuinely love, and that make me happy to look at: nothing more, and nothing less. I cannot tell you how surprising it was to discover how much peace this gives me.

Not all of the advice in this book is perfect, or even reasonable, but at the root of it is this: letting go – even (or perhaps especially) when it’s hard – feels so good. With your stuff, and in your life, it’s worth making the effort to say good-bye to the past.