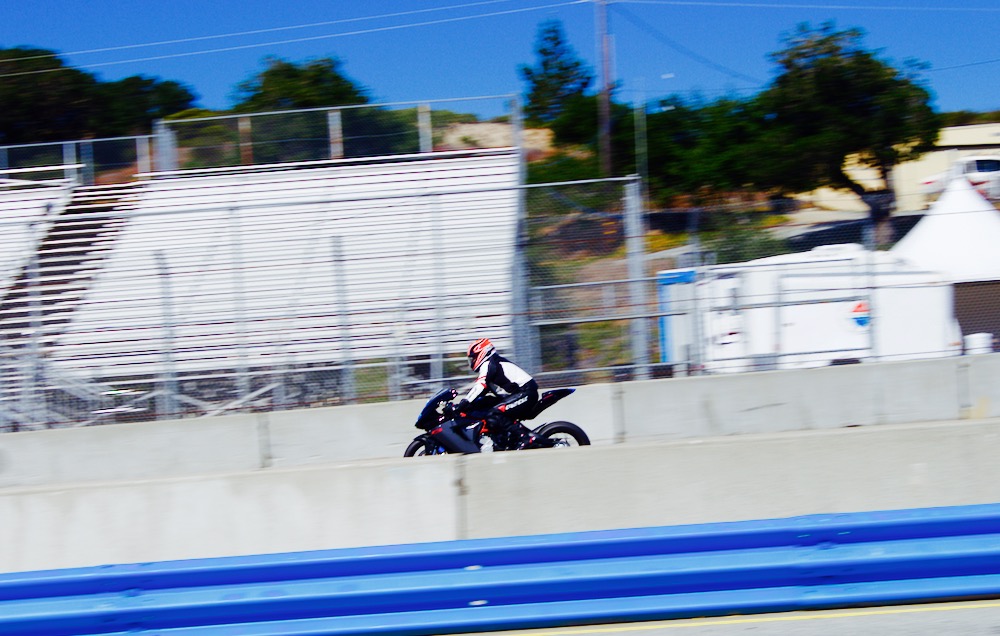 This is my Dad, racing on the track at Laguna Seca. He is 70 years old.

For many, many years, my primary mode of transportation was a motorcycle. I’ve been on one since I was about seven months old, tucked into a kind of rucksack contraption on my dad’s back with a teeny-tiny helmet on my head (this is obviously pretty crazy – not to mention definitely illegal nowadays – but was apparently more or less acceptable behavior back in 1981). When I turned sixteen, my parents did the opposite of what every other parent in the world would do, and signed me up for a motorcycle training course so I could get my license as soon as possible and join in on the family pastime. I spent the weekend at some kind of army base camp-type place, practicing my turns around orange traffic cones alongside the four middle-aged men and two twentysomething guys who comprised the rest of the class.

My bike was a yellow Suzuki Savage 650. It wasn’t the prettiest thing I’ve ever seen – it was really yellow – but I loved it. I think you always love the first vehicle you own. I rode it to school in the mornings, and on weekends I sometimes took solo drives up towards Bear Mountain, my heart pounding as I took the curves on the Henry Hudson Parkway, my mind screaming don’t fall don’t fall don’t fall. Riding never felt comfortable to me, exactly, but I pretended that it did – because walking into class with my helmet in my hand, I was The Girl Who Rode A Motorcycle.

And then, when I was 19 years old and on a road trip to Canada with my parents, I crashed my bike. I had my mom on the back – the first time I’d ever tried riding with a passenger – and we were going along a tiny, winding road in the New Brunswick countryside when we came up to a turn that hadn’t been marked with a sign (or, if it had, I didn’t see it). I took the turn a little too fast, and with the extra passenger weight I couldn’t control the bike when I went over a patch of gravel. The bike skidded and listed to the left, and Mom sort of bounced off of the back, landing on her shoulder (which has a small scar on it to this day). I went down with the bike itself, coming pretty close to removing the skin on my palms and doing serious damage to the leather jacket that I was very fortunately wearing (I should have been wearing gloves too, and usually did, but for whatever reason had skipped them that morning).

I remember the feeling of the bike losing its grip on the pavement, but I don’t remember the few minutes that followed; the next thing I can recall is sitting on the side of the road, slowly and carefully examining each part of my numb, buzzing body to try to figure out where the blood was coming from. I remember saying “I’m sorry Mommy, I’m sorry Mommy” over and over in a weird, high-pitched little-kid voice.

Mom went for help (no cellphones back then – or at least not ones you took with you everywhere); we went to the hospital; my bike went to a shop to get fixed up. We spent an extra night at the hotel to rest. And then, the next morning, my dad picked up my bike, drove it back to the hotel, and told me to get back on it, because we had to drive home.

I can’t even tell you how terrified I was, swinging my leg back up onto my motorcycle. I’ll never forget the feeling of seeing the ground rise up to meet me, and when I sat back down on the bike that ground was the only thing I could think about. Riding a motorcycle demands that you be super-aware, constantly evaluating your surroundings and looking for potential dangers – but it also requires a certain degree of confidence…and that whole first day of driving south, away from Canada and towards our New York City home, I thought I’d lost mine.

We stopped for the night in Ogunquit – the little town in Maine where, several years later, Kendrick and I would get married – and I unwrapped and re-wrapped my bandaged hands, then unwrapped and re-wrapped my mom’s shoulder. I felt exhausted, beaten-up, sore…and – to my surprise – exhilarated. Because I’d done it. I’d crashed, and then I’d gotten back on, and then I’d driven a distance that would be difficult for anyone – let alone someone who had been in an accident just 24 hours prior.

And my dad: I remember his face when I got back on the bike the next morning to drive the last leg back home. I don’t think he’s ever looked as proud.

A year or so later I sold my bike, and as time went on I more or less stopped riding – and now, today, it’s been a good eight years since I’ve gotten on a motorcycle. I think about this all the time, you know. I wonder if it constitutes a failure, because riding is such a big part of my family’s life – and it’d be sad if I’d stopped because I was scared. But the fear flew away over the course of my thousand mile trip back home with bleeding palms and aching muscles; by the time we pulled up to our street I felt the same as I ever had – which was, I realized awhile later, not great.

I grew up seeing my parents on their bikes, seeing what freedom and joy they found in them, and I wanted so badly to feel the same way…but as I got older, what I ended up discovering was that riding, for me, was about the adventure, about doing something extraordinary with my parents, not about the motorcycle itself. I found riding stressful; physically and emotionally exhausting. I’d pretty much always, if I was being honest with myself, rather take a car. Eventually I realized that I didn’t have to keep on doing something just to prove to myself over and over again that I could.

Last weekend, we took a family trip down to the racetrack at Laguna Seca to see my dad race his bike. My kids got to climb all over my dad’s motorcycle, got to watch him ride on the track, got to hang with the other racers in the garage. I’m so happy that they saw their grandfather being brave, doing things that most people half his age wouldn’t dare to do.

I don’t ride anymore – maybe I will again at some point in the future; but not now – and I’m not going to be the parent signing my kids up for motorcycle classes when they hit age 16, but still: you better believe I’m going to tell them, one day, about that time I did the thing that was so hard and so scary it seemed impossible: a ride that I didn’t think I’d be able to do, and then did. 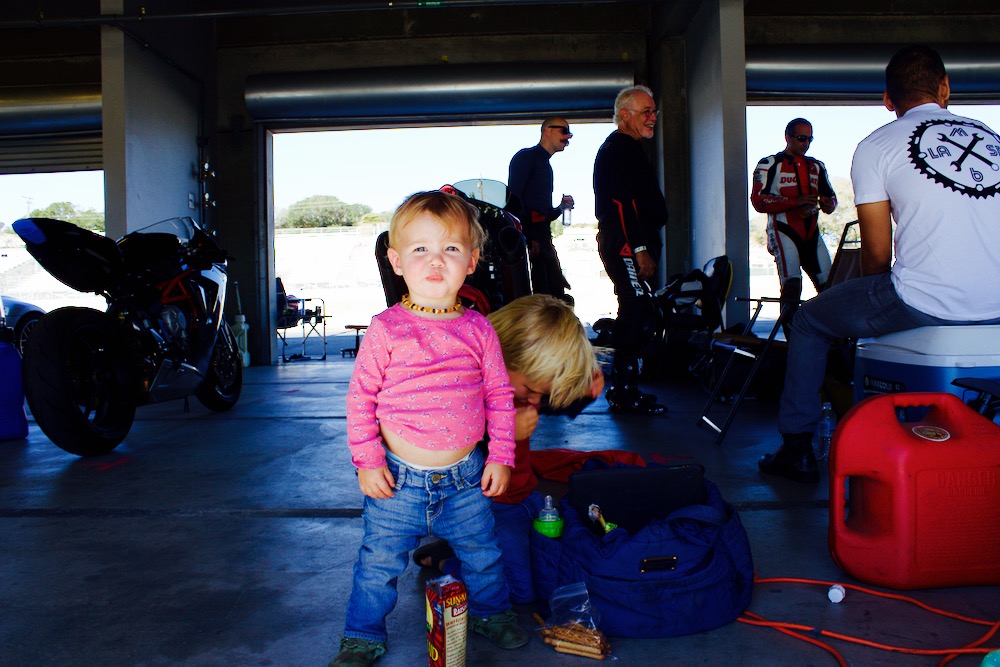 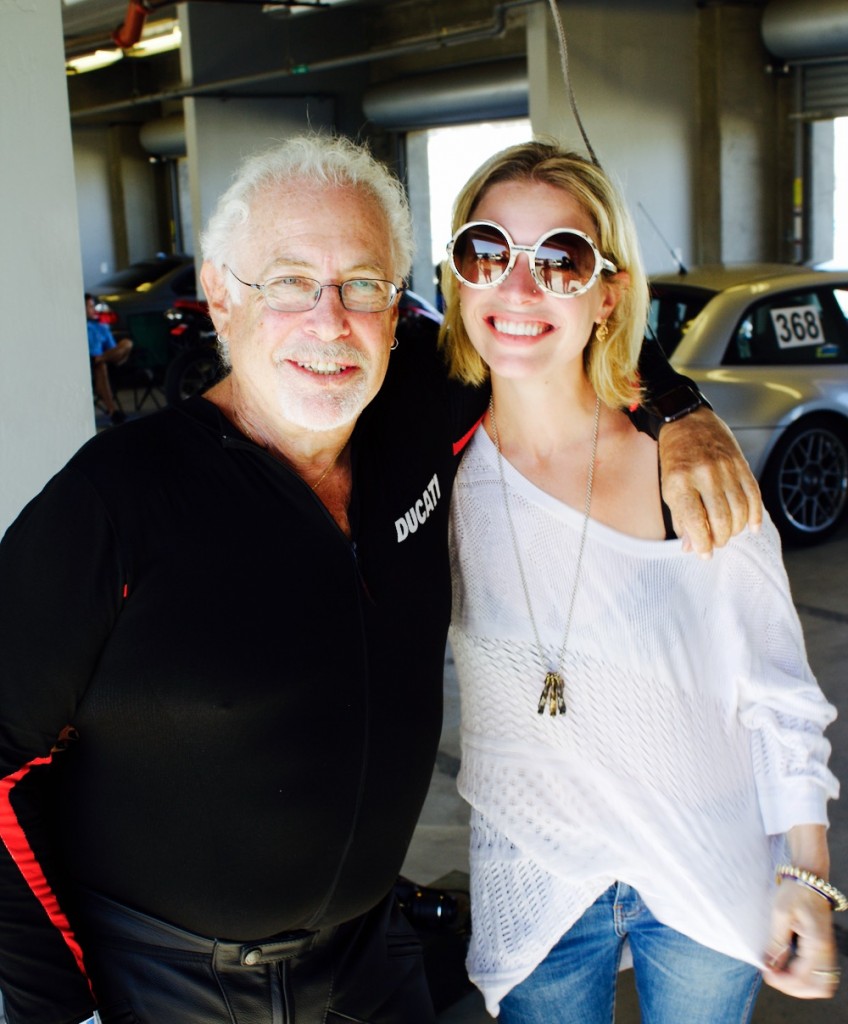 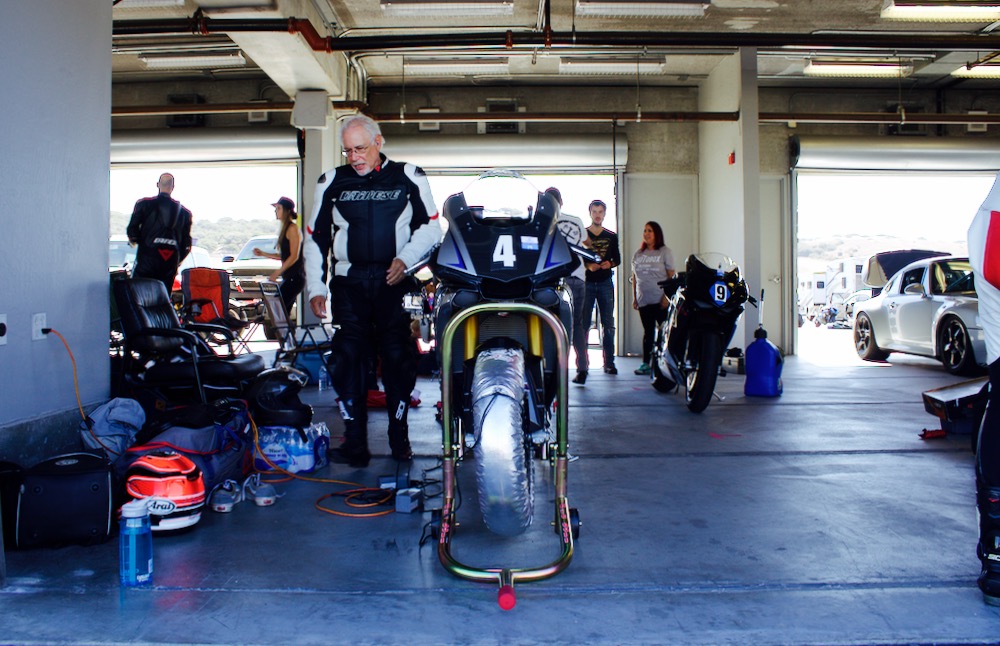 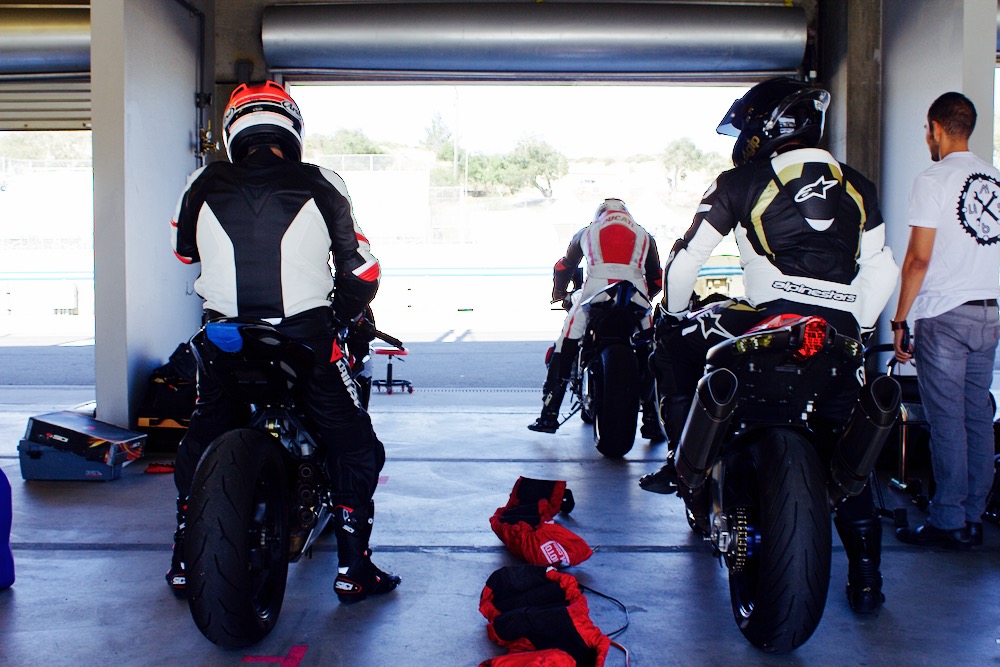 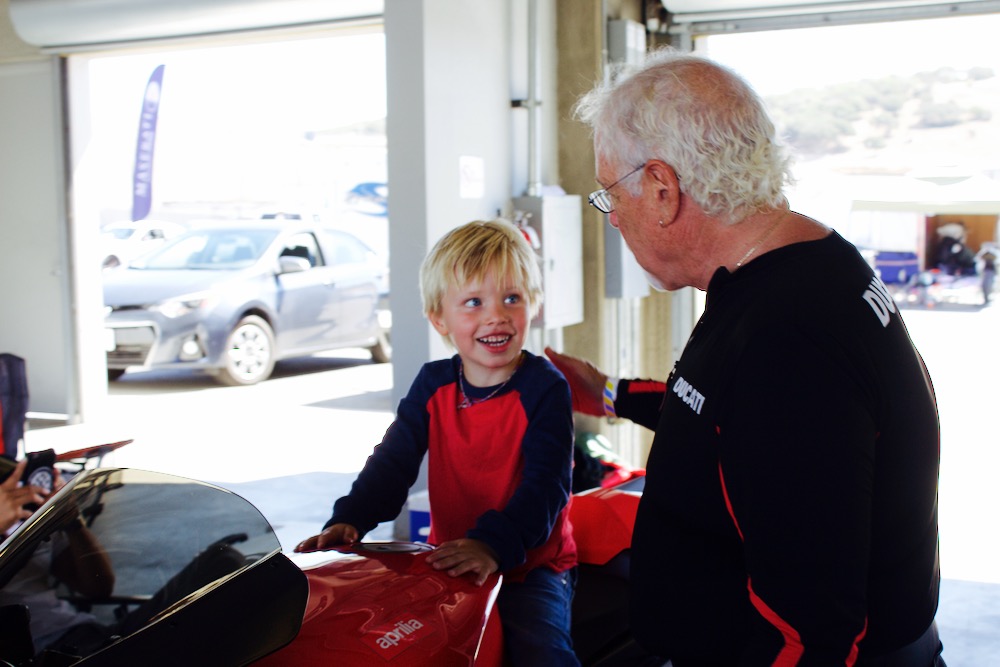 (Thanks for making me get back on the bike even when it wasn’t easy, Dad. I’m proud of you for doing the same.)