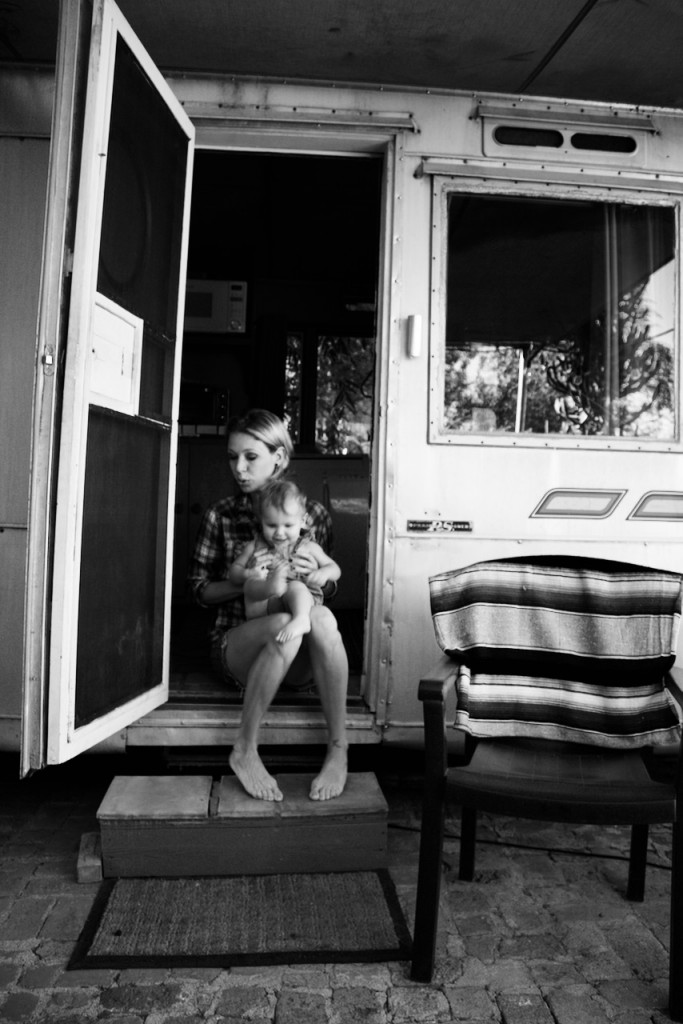 …But I have a feeling I’m not going to succeed.

OK, so I was really late to the AirBnB party – I stayed in my very first one during our house-hunting trip last March, which is approximately fifty years after everyone else started staying in them – but…I mean…that’s how I want to travel.

Our first AirBnB stay as a family was in Asheville. We arrived at a place called The Treehouse, climbed up three outdoor flights of stairs, got all excited about the rooftop hot tub, got even more excited (or at least one of us did) about the massive fish tank in the living room, and then realized:

Hm. Only one (small) bed. Which presents a minor issue when four human beings are planning to spend the night. I was positive that I’d seen a twin bed in the photos on the site when I booked it, but we looked everywhere (and the place wasn’t big to begin with, so there weren’t many places to look), and: no bed. So we set up the Pack ‘n’ Play for Goldie and resigned ourselves to a night spent with three-year-old feet planted firmly in our faces, no big deal.

This is like Every Child’s Fantasy. (Also I took a much more thorough and theoretically much more entertaining video the next morning, but it appears to have been eaten by the iMovie trolls. Ah well.)

In the weeks since, we’ve stayed in a whole bunch of AirBnBs, including a beautiful guest house in Santa Fe with rugs that directly inspired everything that I want to do with my own home decor forever and ever, a spectacular midcentury mini-house sitting smack in the middle of the Joshua Tree desert, complete with tiled soaking tub and heartswelling sunsets, and the 1954 trailer you see here, and without fail they have been among the coolest places I have ever stayed in my life.

The AirBnBs – or at least the ones we’ve stayed in – haven’t been especially fancy (although they almost always include little extras that I appreciate so much, like a bowl of bananas or some cool local coffee) but they’re…I don’t know, they’re not Hampton Inns, you know? And I’m not slamming Hampton Inns (or any other hotels), but there’s something really awesome about experiencing a new place from the inside out, rather than having it all sort of distilled down into a pleasant nonevent by all those homogenized chain-hotel trappings. And it’s been so special, having the opportunity to interact with our hosts in each place; having that human element just…I guess it makes you feel more included. More like you’re in the middle of wherever you are.

Oh yeah: and it’s cheaper. (The place you see in the video – which was GORGEOUS, even though you definitely can’t tell from those 45 seconds – was $110/night, and the Pasadena trailer you see in these photos was $75/night.)

I’m aware that there are issues associated with the proliferation of AirBnBs – among them, renters illegally offering up their apartments on the service, thereby potentially exposing the others in their building to a constant influx of strangers, et cetera (and I’m seriously curious about any other major issues that I’m unaware of, because there have to be a whole bunch, no?) – but this discovery has completely transformed the way we travel. Especially because when you have kids, you spend a lot of your time in any vacation spot in the room; that’s just the reality when naptimes and 6AM wake times and 8PM bedtimes are on the menu.

I want where I’m staying to be part of what I’m doing. And it seems like this is how to do that. 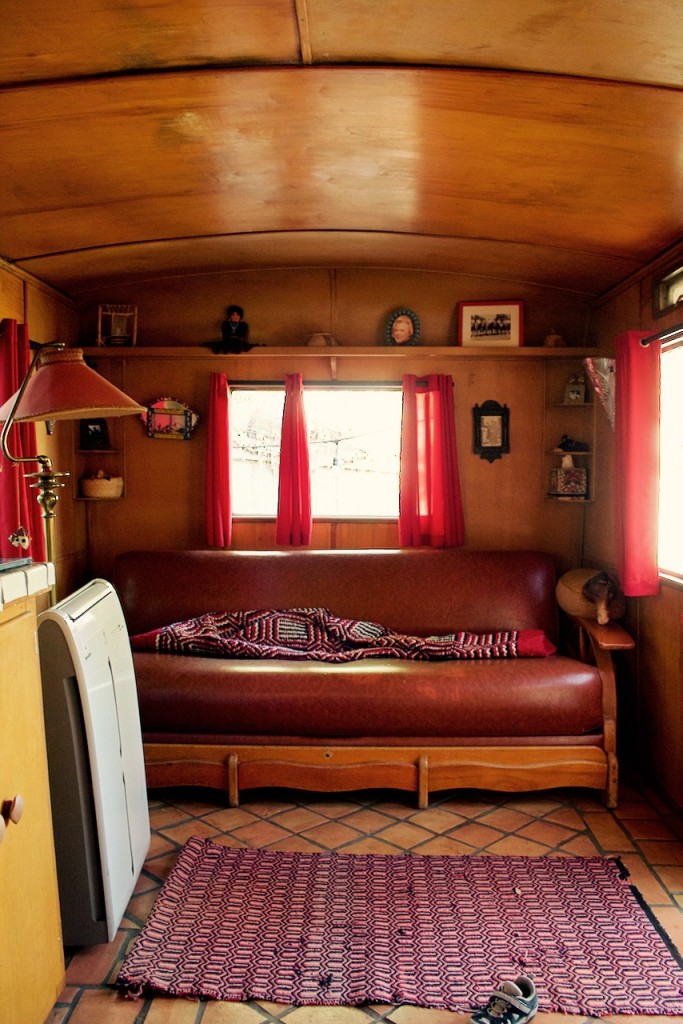 The interior of the trailer that we stayed in in Pasadena, complete with original 1950s pull-out couch (which we left folded up because when it was unfolded there was virtually no room for the Pack ‘n’ Play we brought for Goldie). 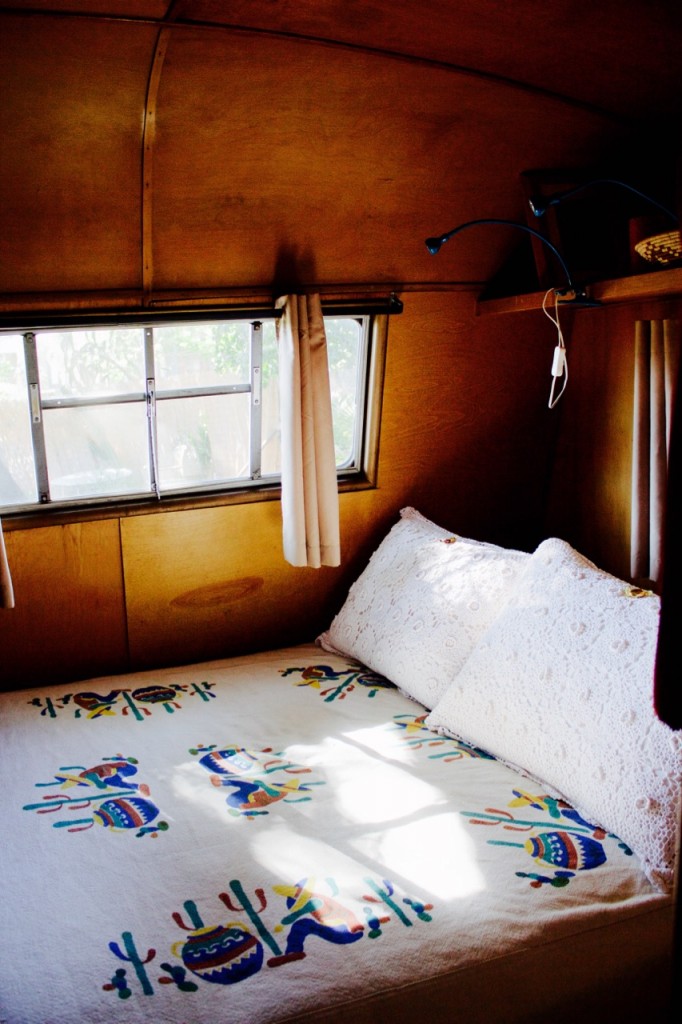 And here’s where we (and Indy, one night, because Goldie was crying and crying babies wake up three-year-olds and that’s life) slept. This bed took up the entire “bedroom,” but was super comfortable. The whole thing felt like extremely cozy camping.

More shots of our Pasadena AirBnB: 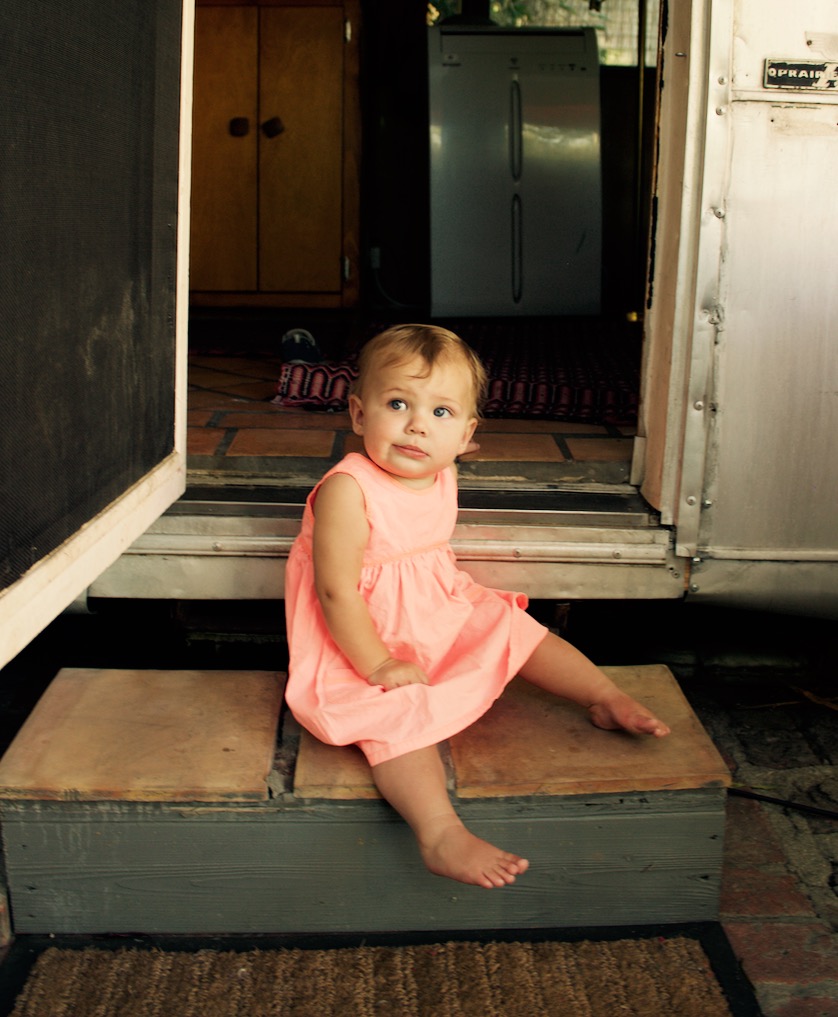 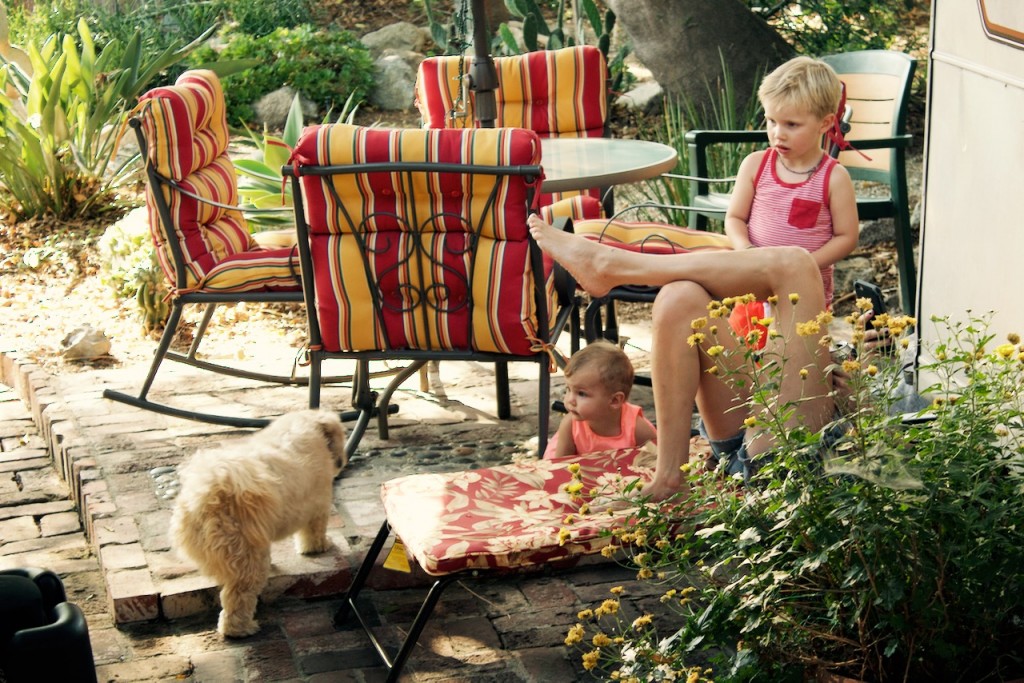 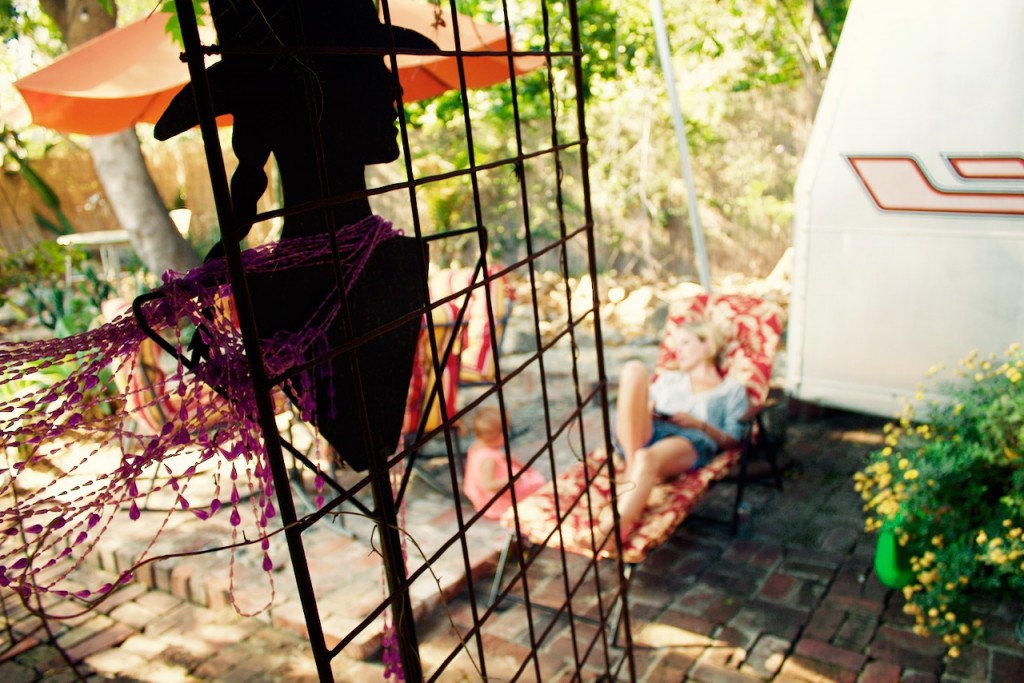 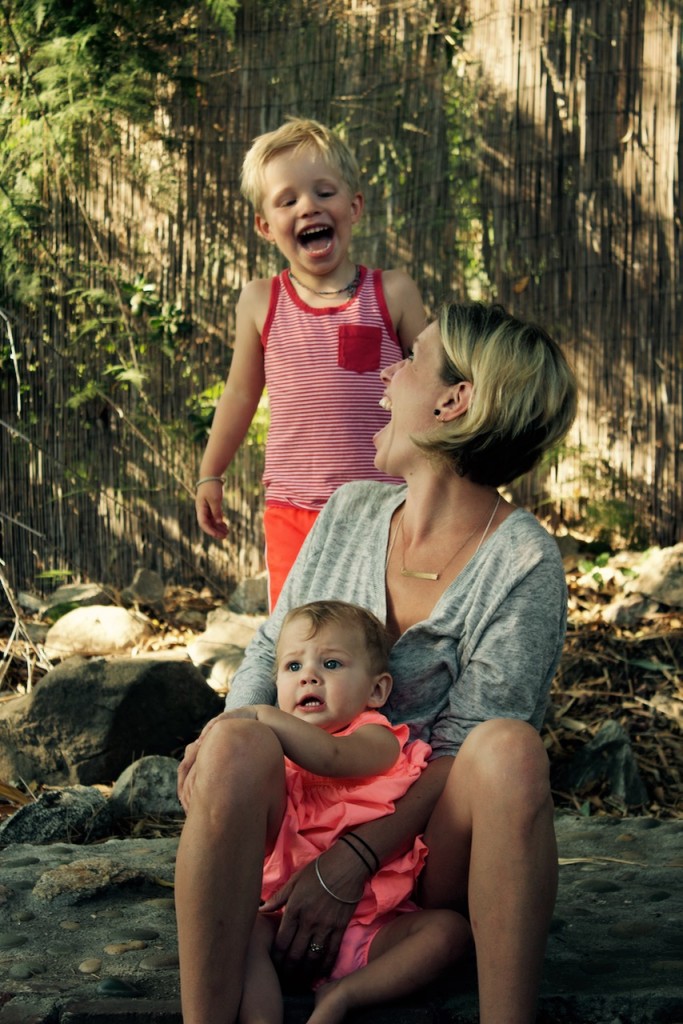 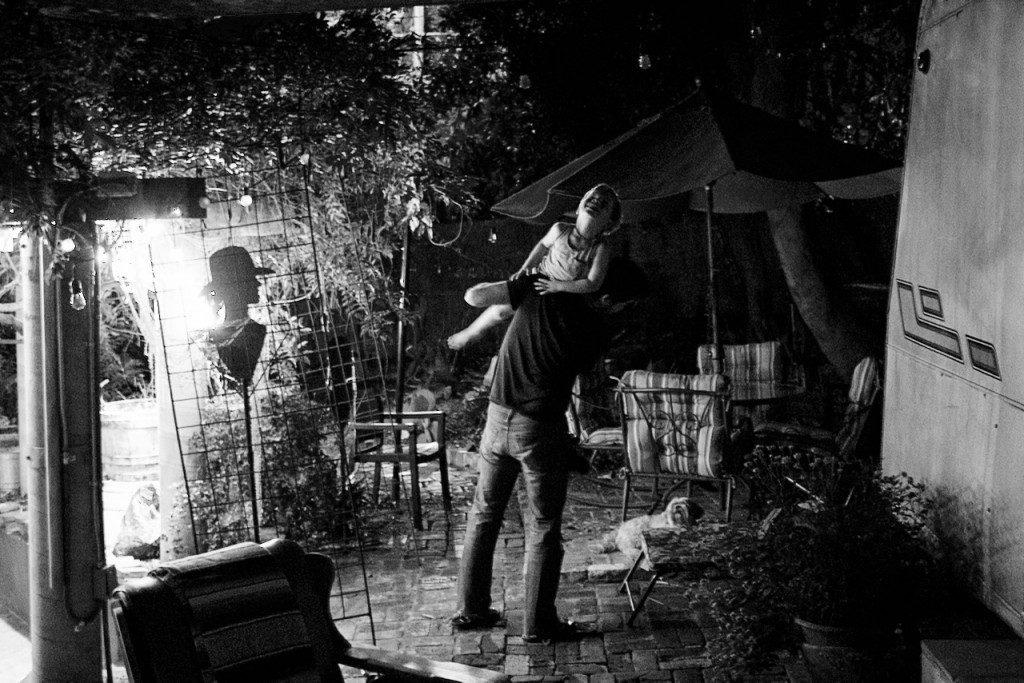 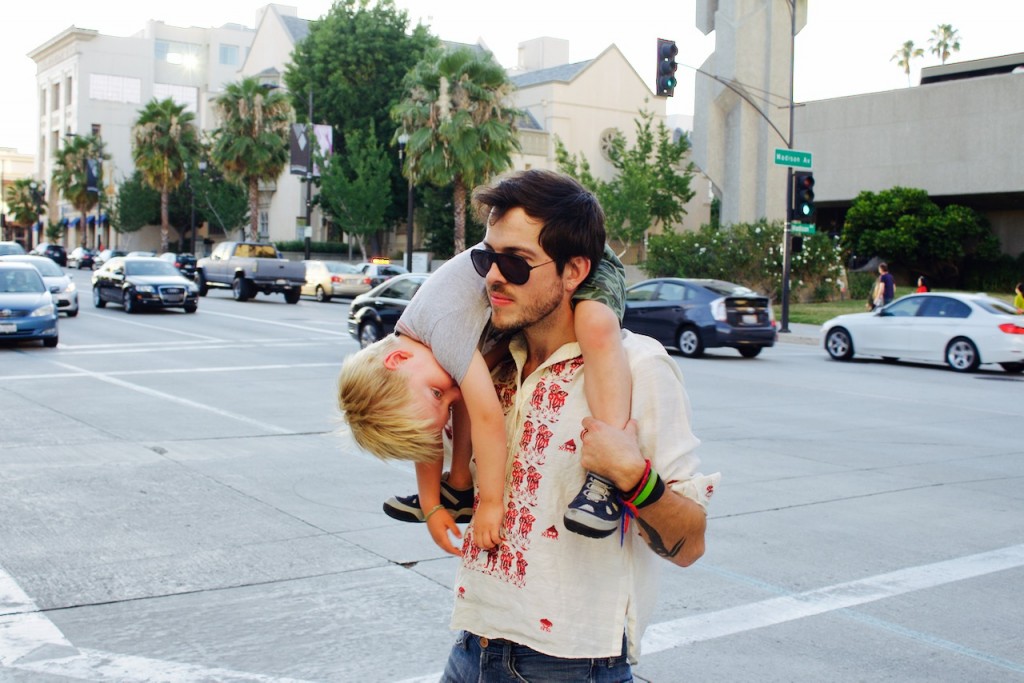 (That last photo is just in here because it was taken in Pasadena, and is thus tangentially relevant, and because it’s an excellent encapsulation of what it’s like to travel with a three-year-old.)