Hanging Out In Furniture Heaven 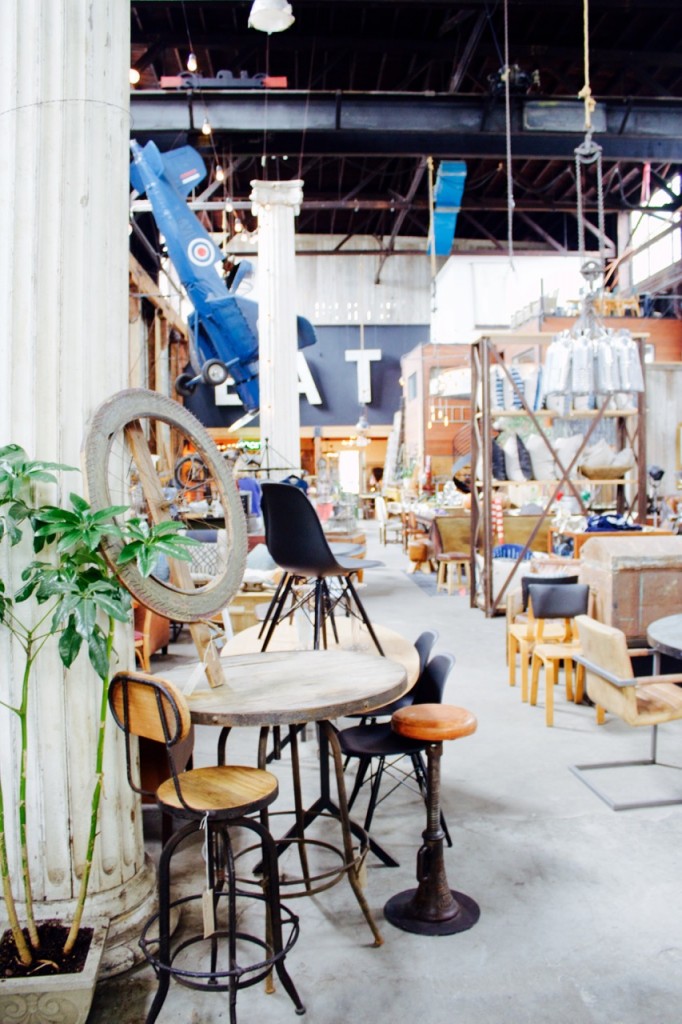 I don’t even know how to describe the Big Daddy’s showroom in San Francisco, other than to say that it’s paradise. Francesca works with the company and introduced me to them when we drove through LA (there’s a showroom there, too), and now I’m basically a superfan and would like to decorate our entire house from top to bottom with their pieces, please. I was in the city for a meeting yesterday morning, so I swung by to check out potential dining room tables (because ours is just way too small for our weirdly large dining room), and then oops: it was two hours later, and they had fed me cookies while I had elaborate fantasies involving pendant lights and leather-wrapped benches.

In theory, Big Daddy’s is an antique and custom furniture store…but that’s sort of like describing an animal-style In ‘N’ Out burger as “a hamburger”: it doesn’t even scratch the surface. What Big Daddy’s really is: an Alice in Wonderland-style maze filled (literally filled to the rafters) with one-of-a-kind pieces, spectacular reproductions, and custom creations of the in-house team of welders and wood-workers. Clients can also work with staff designers to customize pieces, adding, say, fold-out stools made from reclaimed prison table bases to a dining table made from old bowling alley lanes (really; I saw both of these things while I was there).

Also: there are bird cages the size of studio apartments hanging from the ceiling, and next to them is an actual airplane suspended over a wall of buckets, and over there in the corner is a Lucite egg chair hanging from a massive iron wrench-type base, and oh hey, I just tripped over a tiger-print couch, just sitting there all tiger-printed and perfect.

It’s beyond description. You have to go.

(And if you’re not near the warehouse locations in Los Angeles and San Francisco, you can browse some of their collection online. Just FYI, pretty much everything on the site is listed as “sold out,” but don’t let that deter you: I asked about this on my visit and it’s just because everything is so one-of-a-kind – and there’s so much of it – that it’s almost impossible to keep the online inventory up-to-the-minute. So if you see something you like, you can just give them a ring and they’ll send you photographs of similar pieces.) 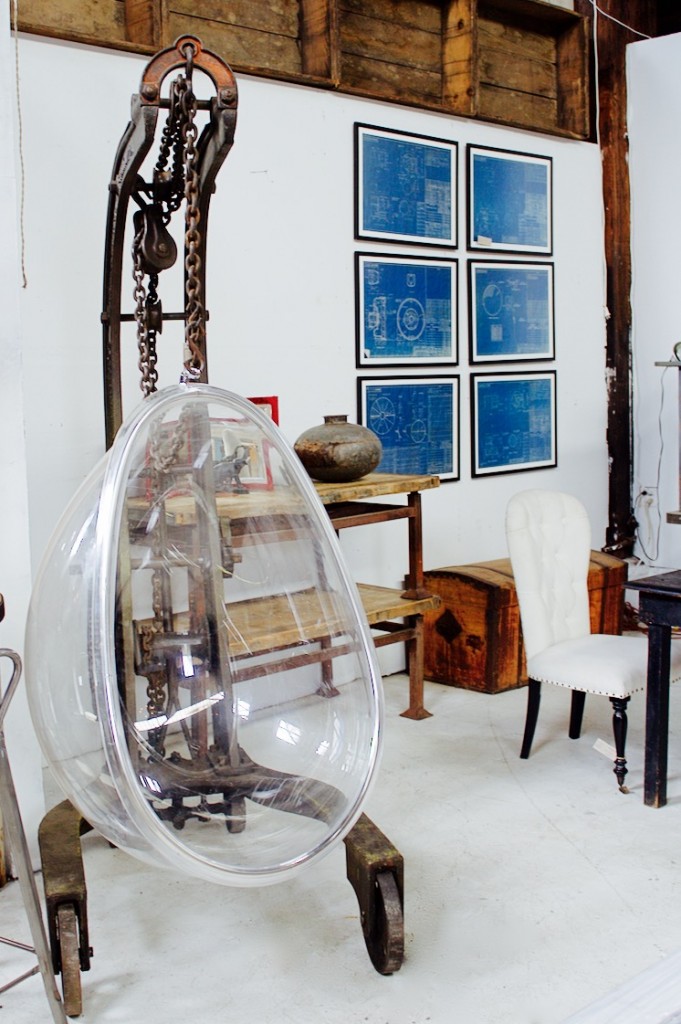 That’s the iron-wrench-egg-chair thing. I want to live in it. 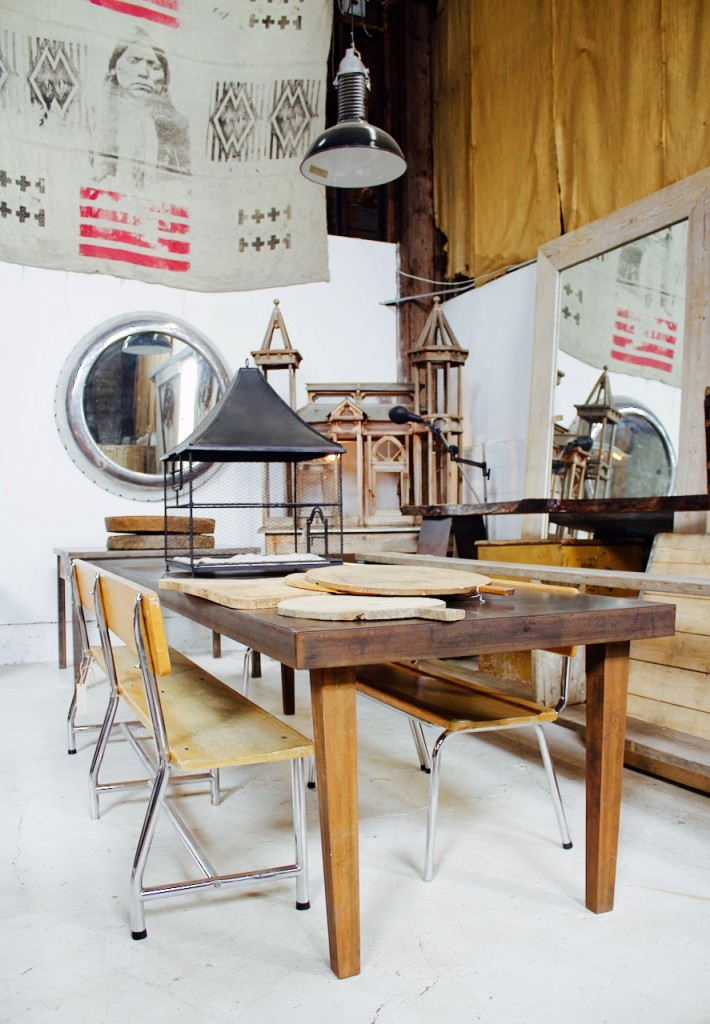 I love love love these schoolhouse benches as an alternative to traditional dining room benches. 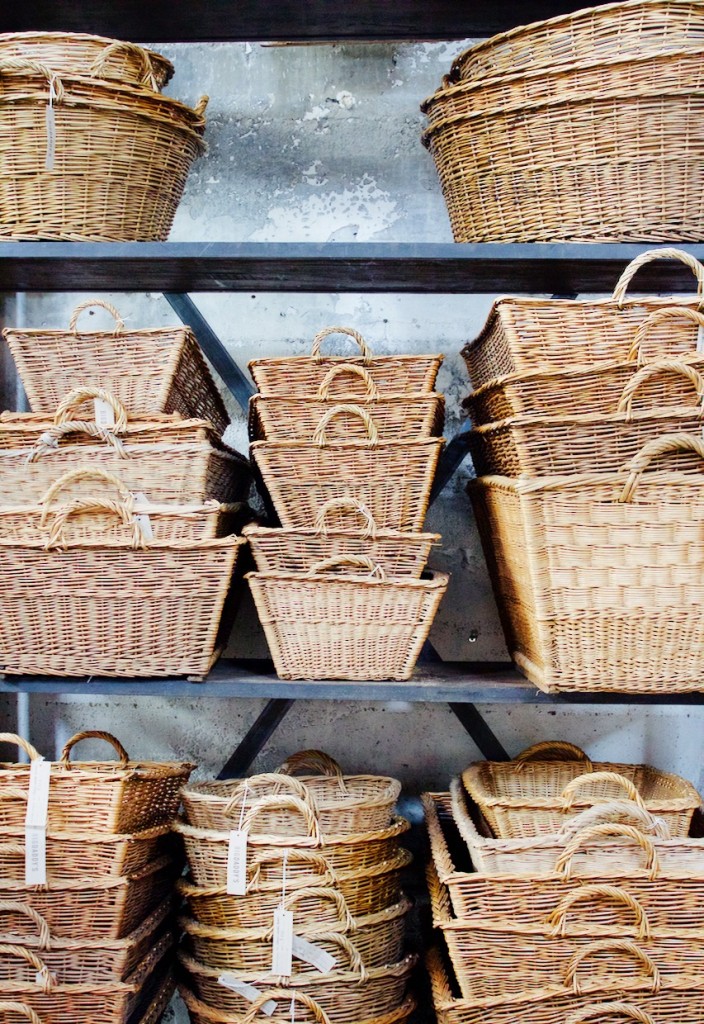 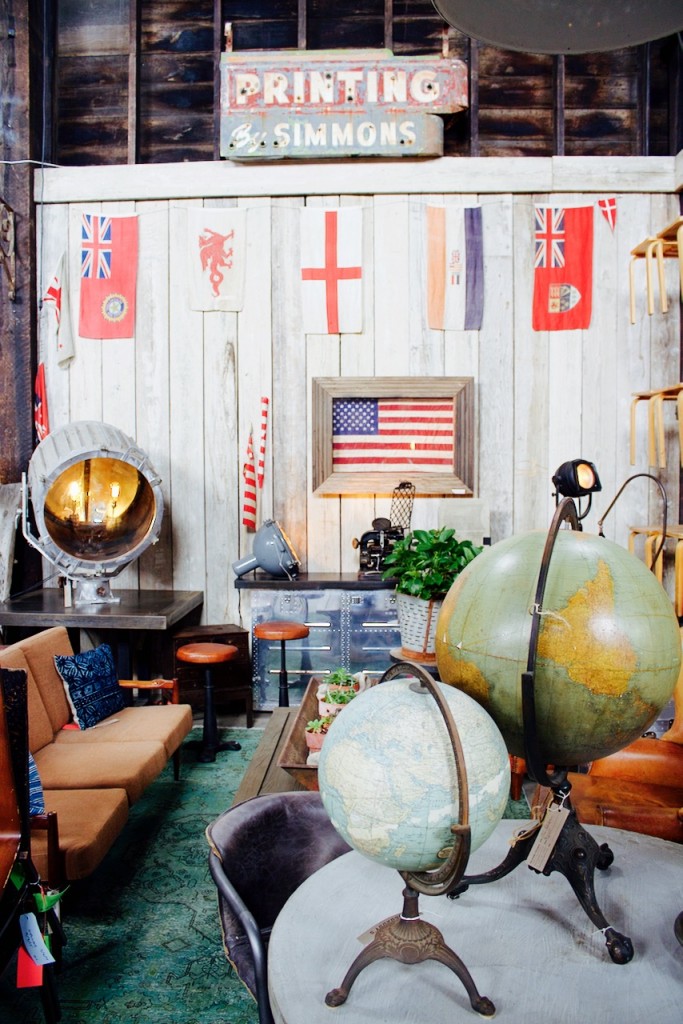 I would be cool with owning virtually every single thing in this photograph. 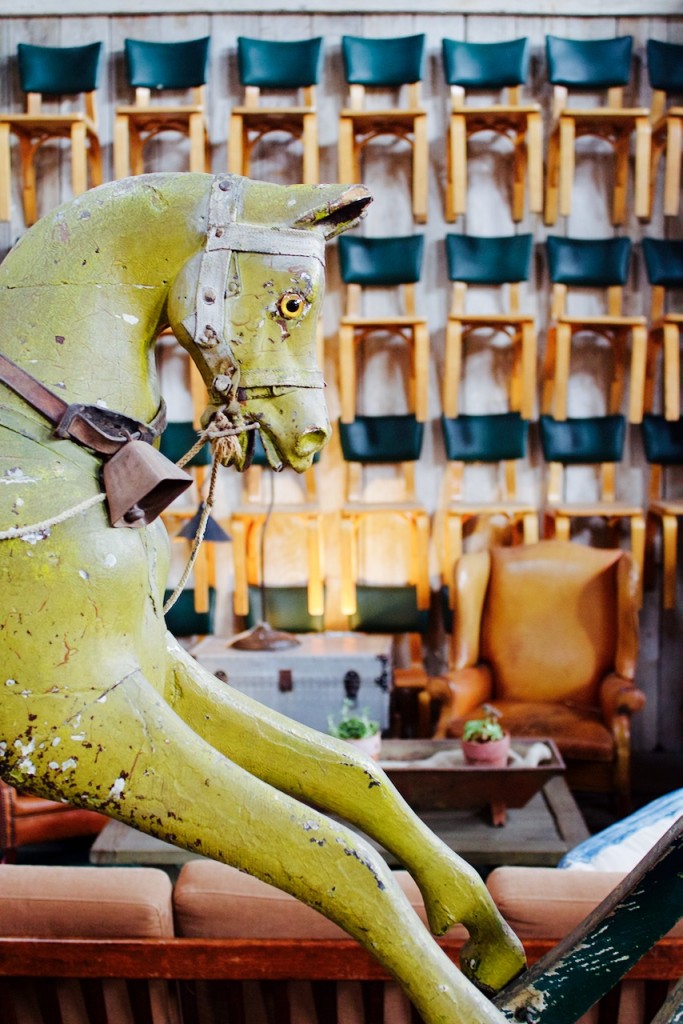 I know that this photo is “about” the rocking horse…but aren’t those chairs great? They’re classic Thonet bistro-style chairs, and I think they’re such a cool, simple alternative to those Eames reproductions that are everywhere. 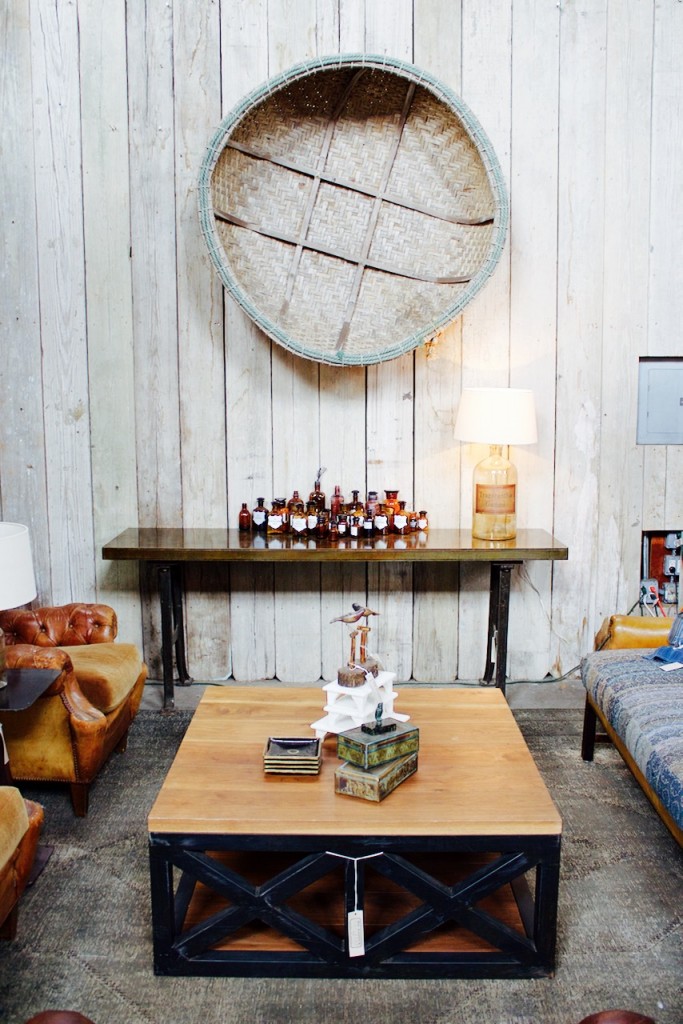 …And now I want to collect apothecary jars. 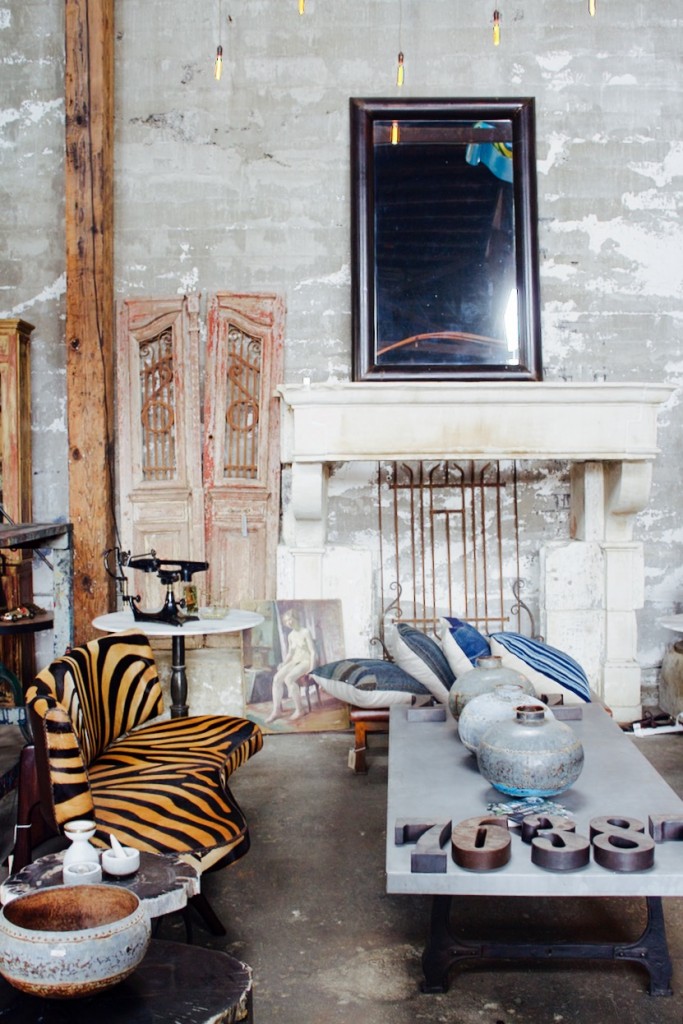 I apologize in advance for using the word “fierce”…but that is a tiger-print couch and it is FIERCE.